Each week, an array of exciting new Samsung rumors surfaces. Even if speculation about future component upgrades or rumors about devices that may or may not actually materialize don’t normally hold your attention, it’s hard not to be curious about what one of the biggest tech companies in the world is planning for its next phones, wearable devices, and apps. Read on for this week’s most interesting reports about Samsung’s plans and future products, from the specs and features we’re most likely to see with the upcoming Galaxy Note 7 to the company’s plans for its Google Glass rival.

1. Samsung may opt for a curved Galaxy Note 7

According to SamMobile, case maker Olixar has listed Galaxy Note 7 cases that seem indicate that Samsung will release a curved version of the Galaxy Note 7 and not a flat-screen variant. The listings seem to reveal that the Note 7 will feature a curved display and have the S Pen slot in its expected position. The design of the device seems to mimic that of the Galaxy S7 edge.

Chris Smith reports for BGR that according to a “preview” of the device by Russian blogger Eldar Murtazin, the Galaxy Note 7 won’t be equipped with a 4,000mAh battery, as rumored. Instead, Murtazin reports, the device will feature a 3,600mAh battery — which will still be able to power the device for 20.5 hours of video playback at maximum brightness. The device will also reportedly feature fast-charging modes for wired and wireless charging, and two energy-saving modes.

Further, Smith notes that reliable source Evan Blass says that many of the rumored features of the device can be considered “confirmed,” including the 5.7-inch QHD AMOLED display, 64GB of storage, microSD support, a 12MP Dual Pixel camera, a 5MP front-facing camera, IP68 dust and waterproof certification, an iris scanner, a trio of case colors, and the name “Galaxy Note 7.” Other reported features include the Samsung Exynos 8893 and Snapdragon 821 processors, 6GB of RAM, additional 128GB and 256GB storage tiers, a new S-Pen stylus, a USB Type-C port, and Android 6.0.1 Marshmallow.

2. Iris recognition is looking more likely for the Galaxy Note 7

It’s reassuring that an iris recognition is characterized as “confirmed” by Evan Blass. But SamMobile reports that a new patent makes it look even more likely that Samsung is equipping the Galaxy Note 7 with an iris recognition system. The filing details a system that would use three lenses to capture an image of the face and eyes of the user, and check the iris of the user. If the system doesn’t recognize the person trying to unlock the device, it could offer a voice message guiding them to retry the iris scan.

3. Samsung’s next version of TouchWiz may borrow some Apple features

Chris Smith reports for BGR that leaks have revealed just about everything there is to know about the Galaxy Note 7, and now a leak has also illustrated how Samsung is planning to change the TouchWiz interface with its upcoming device. The team behind an Italian blog called HDBlog installed a beta version of the new TouchWiz interface on a Galaxy Note 5 and completed an extensive 15-minute video review.

The video demonstrates the main features of the TouchWiz update, which is expected to be the default user interface for the Galaxy Note 7. One of the features demonstrated is a feature that mimics Apple’s 3D Touch, but doesn’t require new hardware. Swiping up on an app icon with your finger or a stylus summons a menu with shortcuts for the app. The feature will likely be available on Samsung’s recent Galaxy devices when they get the TouchWiz update (which will also bring general upgrades to the interface’s design and performance).

4. Future Samsung phones may get an iPhone-style fingerprint sensor

SamMobile reports that according to newly-discovered Samsung patents, the company’s future smartphones may feature more iPhone-like home buttons to offer a better experience with the integrated fingerprint sensor. The first patent details a round Home button, under which the fingerprint scanner would be placed. However, in SamMobile’s assessment, Samsung may not end up replacing its oblong Home button with one that so clearly looks like the one used on Apple’s iPhone since the introduction of Touch ID.

The second patent, on the other hand, doesn’t put the fingerprint scanner under the Home button. Instead, it’s situated on the back of the device, where there’s more space for a bigger sensor, which would improve fingerprint scanning. According to SamMobile, it seems likely that this is the implementation that Samsung will go with, since many Android manufacturers have opted for similar systems.

5. A new Samsung patent offers some hints about its Ahead Google Glass competitor 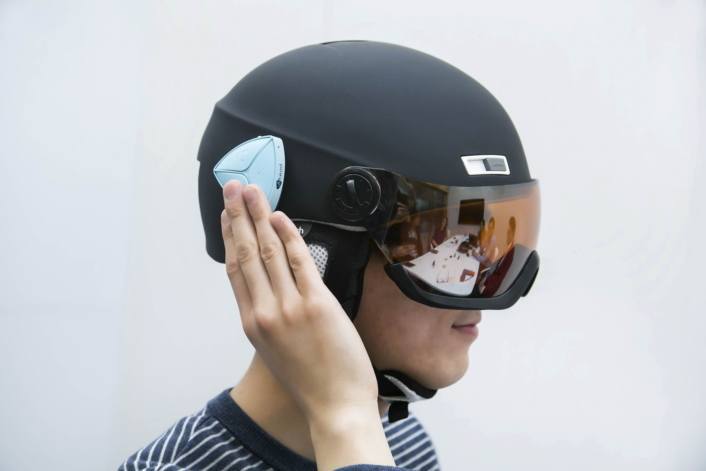 Kyle Wiggers reports for Digital Trends that a newly-filed Samsung patent offers some new information about the company’s plans for Ahead, a Google Glass-like device that’s a project of Samsung’s C-Lab and was unveiled earlier this year. In its current incarnation, Ahead is a small, triangular device that affixes to a helmet via magnets, and pairs with your smartphone over Bluetooth to place and receive calls, receive voice notifications, and play music. It features hardware buttons to adjust the volume, change tracks, and dismiss alerts. It also uses “oscillators” and twin noise-measuring microphones to produce a surround sound effect without silencing the sounds around the user.

The patent filing describes an operating system for a device that supports “electronic display modules” like a screen, headphone hardware capable of MP3 and MP4 playback and digital communication, plus camera capabilities. The form of future Ahead devices is a mystery, though the document mentions “wearable computers in the shape of a helmet” and “wearable digital electronic devices comprised primarily of smart phones in the shape of a helmet.” In the past, the company has reportedly explored the idea of head-mounted displays similar to Google Glass. It’s been rumored that the company would launch a “Gear Glass” headset, which hasn’t appeared yet but may in the future.