10 Stars Who Wore Floral Outfits to the 2017 SAG Awards

Wearing florals may seems as overdone as wearing a metallic column dress on the red carpet (as ice queen fashion editor Miranda Priestly sarcastically said in the hit movie, The Devil Wears Prada, “Florals? For spring? Groundbreaking.”), but last night’s Screen Actors Guild Awards made a case for flower power. There were tons of stars who dazzled the red carpet, but a flower-adorned outfit was arguably the biggest trend of the night. Best of all, each actress had her own way of interpreting the trend. Whether printed, embroidered, or appliquéd onto the dress, the 10 women below made flowers far from boring. 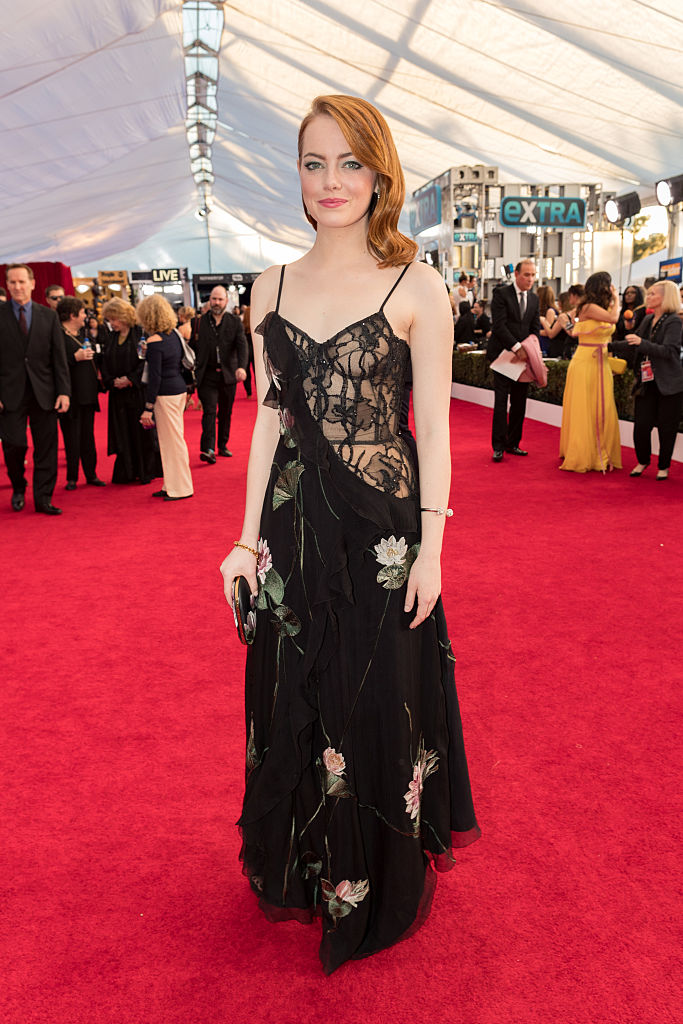 It’s never a dull moment with Emma Stone. We love the La La Land actress, and SAG recipient, for pushing the sartorial envelope and having fun with fashion. Luckily, last night’s look did not disappoint. Dressed in Alexander McQueen, Stone proved that flower prints aren’t just for grandma.

Theoretically, a half-floral half-lace dress could go very wrong. But between the clever draping of the floral fabric and Stone’s sheer confidence, this look was a hit. The unexpected juxtaposition was sexy, thought-provoking, and surprisingly refined. To tie the entire look together, Stone opted for a subtle green eye shadow and light pink pout. 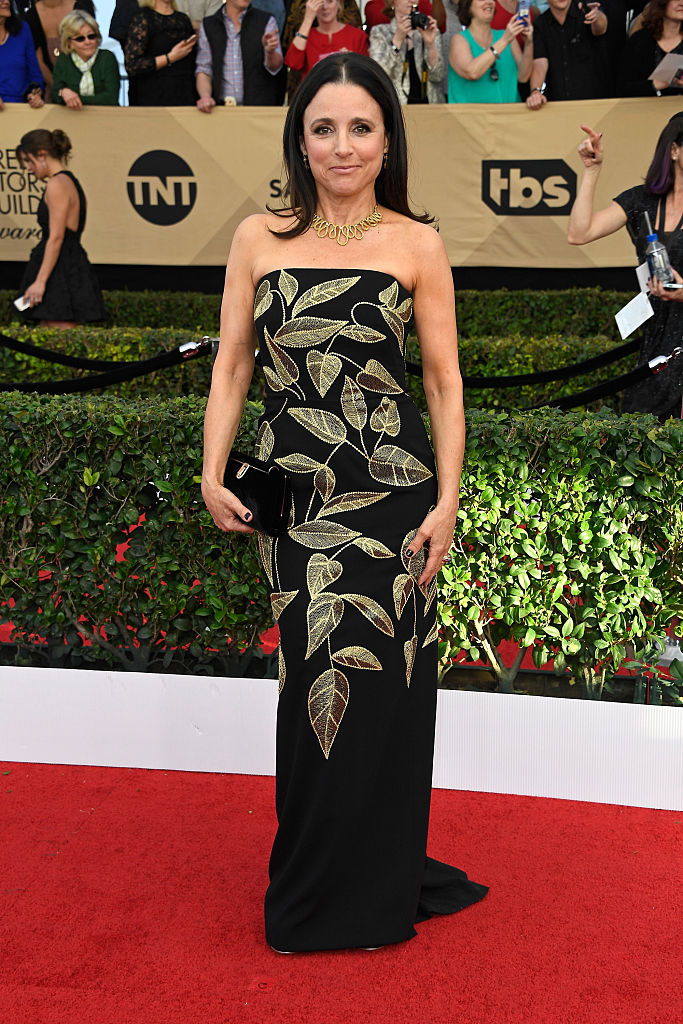 Not a fan of roses, peonies, and tulips? You might want to consider rocking some leaves instead a la Julia Louis-Dreyfus. The Veep star is no stranger to a traditional column dress, but we thought this look was extremely well-executed. Not only was the leaf pattern a cool and age-appropriate alternative to flowers, but the placement of the leaves was also incredibly smart. Instead of head-to-toe leaves, which has the potential to look busy, the print stopped just below the knee. Since the pattern didn’t dominate her entire ensemble, the lavish gold necklace was a thoughtful finishing touch. 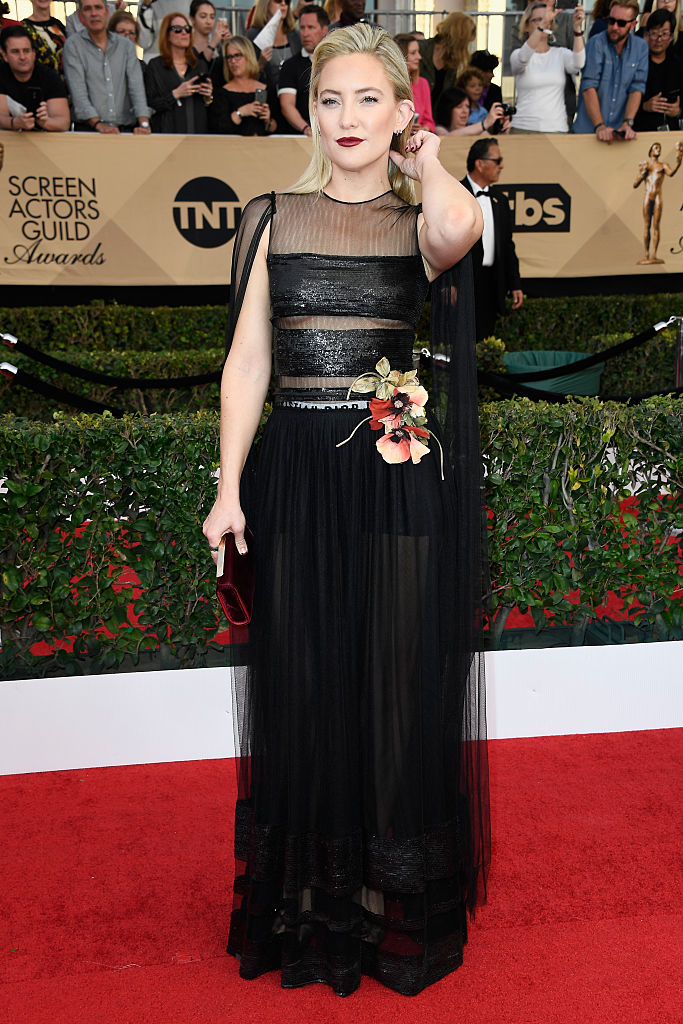 We were pleasantly surprised by Kate Hudson’s Dior gown. Over the past few years, the actress and wellness guru used almost every red carpet opportunity to flaunt her incredible abs. (It’s okay, we’d do the same if we had two kids and an eight-pack.) Because of this, we’ve stopped thinking of Hudson’s looks as fashion-forward, but last night’s Dior dress was different. Sure, her partially sheer bodice left little to the imagination, but the sheer cape and flower appliqué gave this look some next-level appeal. Admittedly, this wasn’t our favorite look of the night, but we commend Hudson and her styling team for taking a risk. 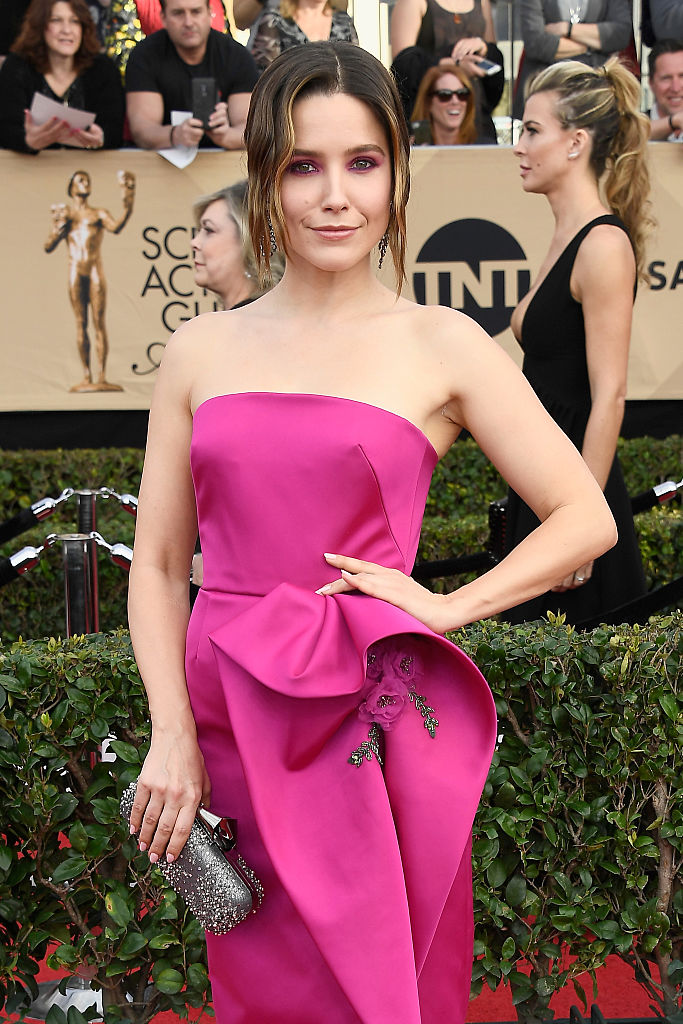 Wearing a flower-printed dress is not the only way to participate in this trend. Many celebrities, like Sophia Bush, sported dresses with subtle floral embroideries and appliqués. If you looked too quickly, you probably missed the sweet floral detailing that was strategically placed in this asymmetrical Marchesa number. The dress’ silhouette and hot pink hue is very reminiscent of Marilyn Monroe’s infamous Gentlemen’s Prefer Blondes dress, yet Bush gave it an updated twist with an undone ponytail and bright pink eye shadow. 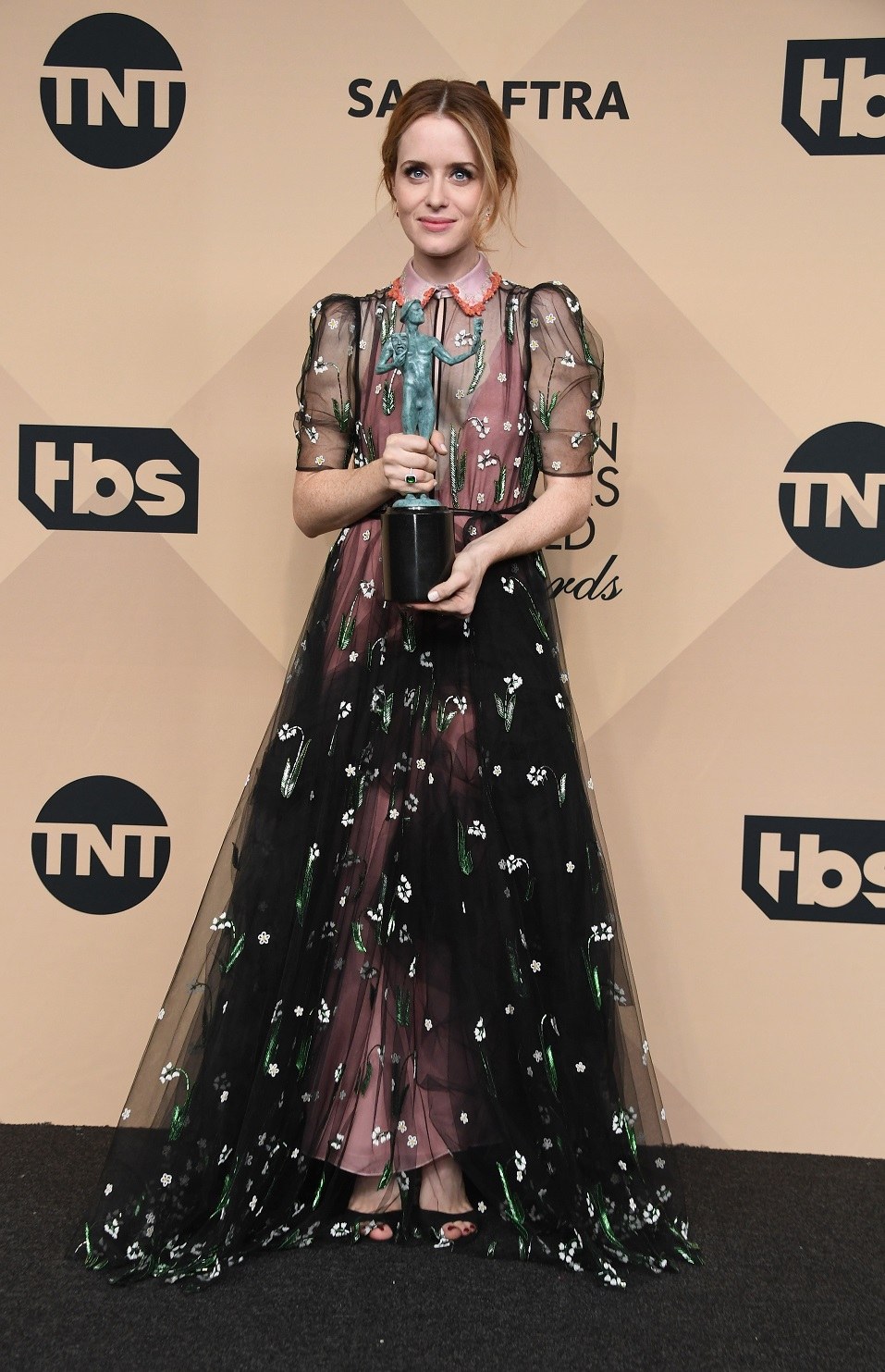 As the star of Netflix’s breakout show The Crown, Claire Foy is quickly becoming a red carpet favorite — and this Valentino number is no exception. Equal parts edgy and regal, this was one of our favorite looks of the night. While the silhouette is fit for a queen, the sheer overlay and peach collar has cool girl written all over it. On the beauty front, Foy’s subtle cat-eye liner and nude lip perfectly matched her outfit. 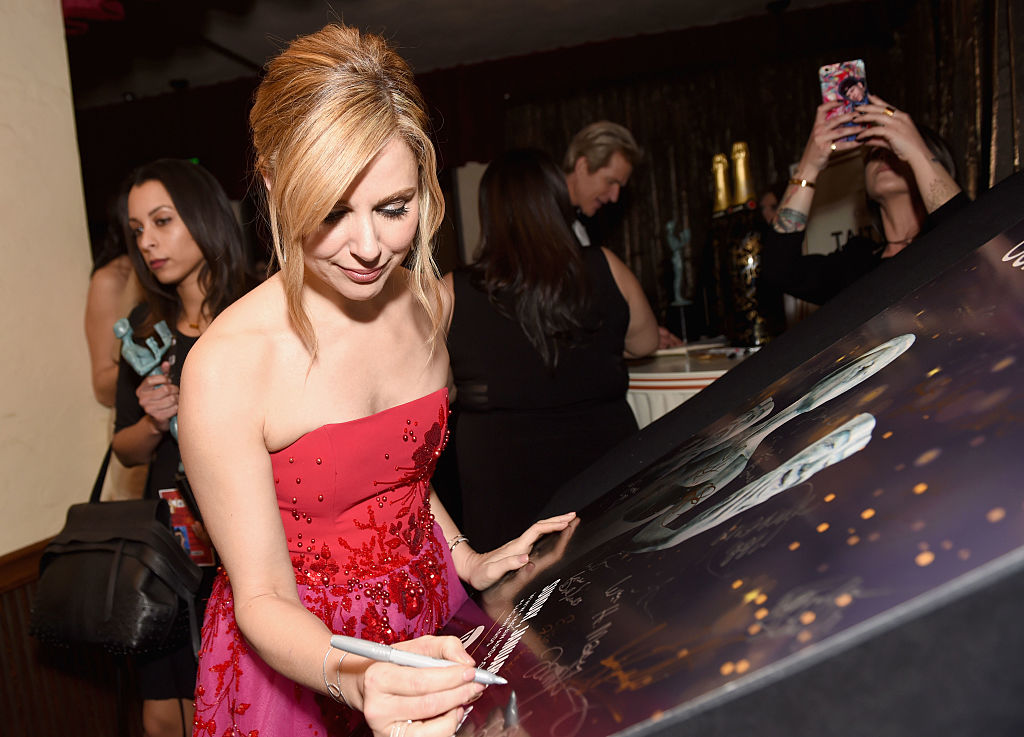 File this under “outfits you’d wear to a Valentine’s Day gala.” This dress didn’t top any fashion favorites list, but the Stranger Things star looked cute and event-appropriate. Red and hot pink tend to look forced together but, with the help of an ankle-length hemline, Buono looked unapologetically girly. We also loved how the floral appliqué perfectly matched her shoes as well as the dress’s bodice. Since her dress packed on the sparkle and bright colors, Buono played it safe by keeping jewelry to a minimum. 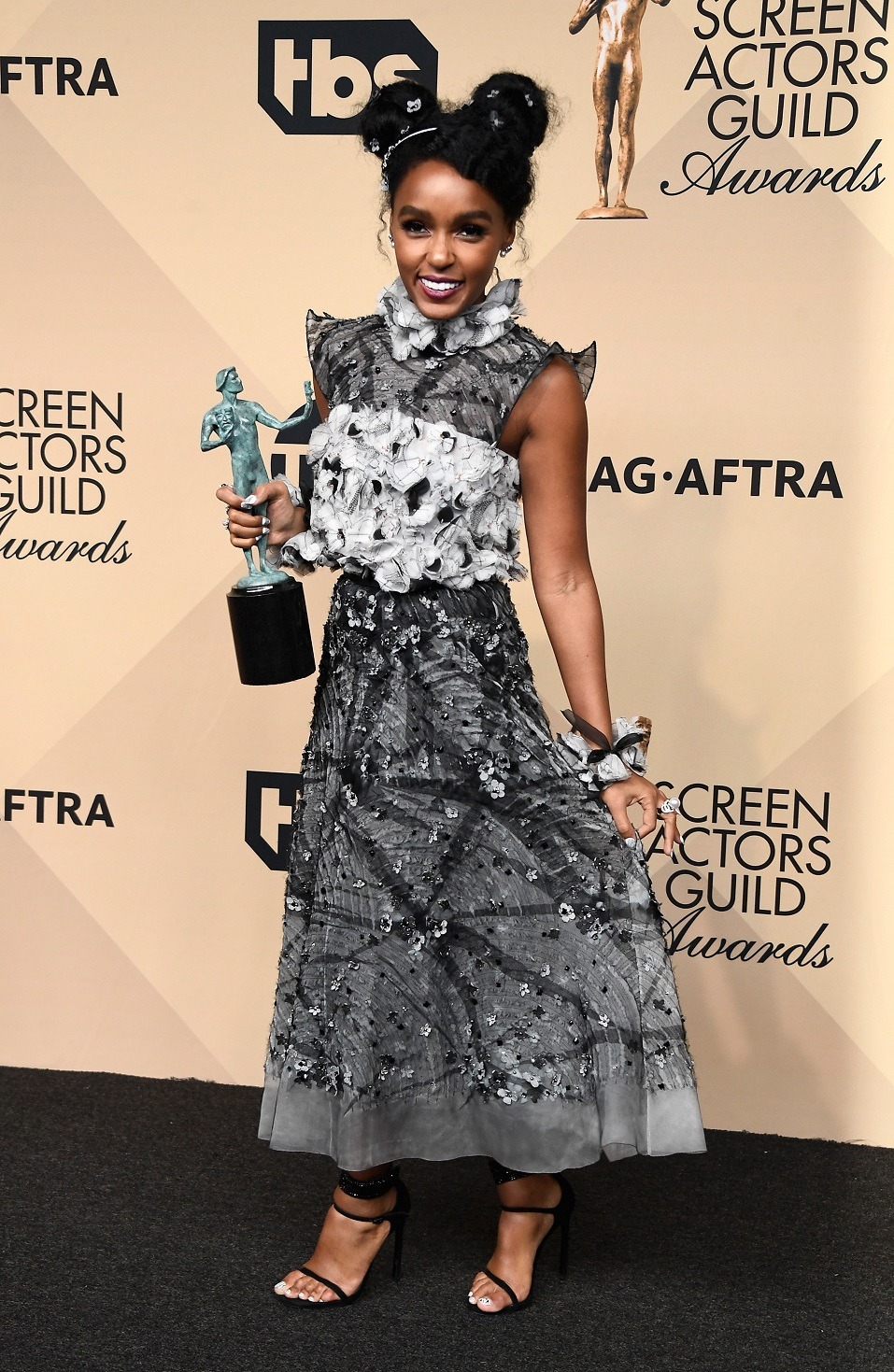 Janelle Monáe always knows how to make a sartorial statement, and she didn’t hold back last night. This ensemble may not be everyone’s favorite look, but the Monáe’s fearless sense of style is worth appreciating. Designed by Chanel, this dress is simple in silhouette and color scheme but extravagant in texture. Between the cuffs that match the ruffled Victorian collar, embellished buns, and purple lip, Monáe’s clever styling made this outfit more like a runway look than a simple awards show ensemble. Love it or hate it, we can agree she added something fun to the red carpet. 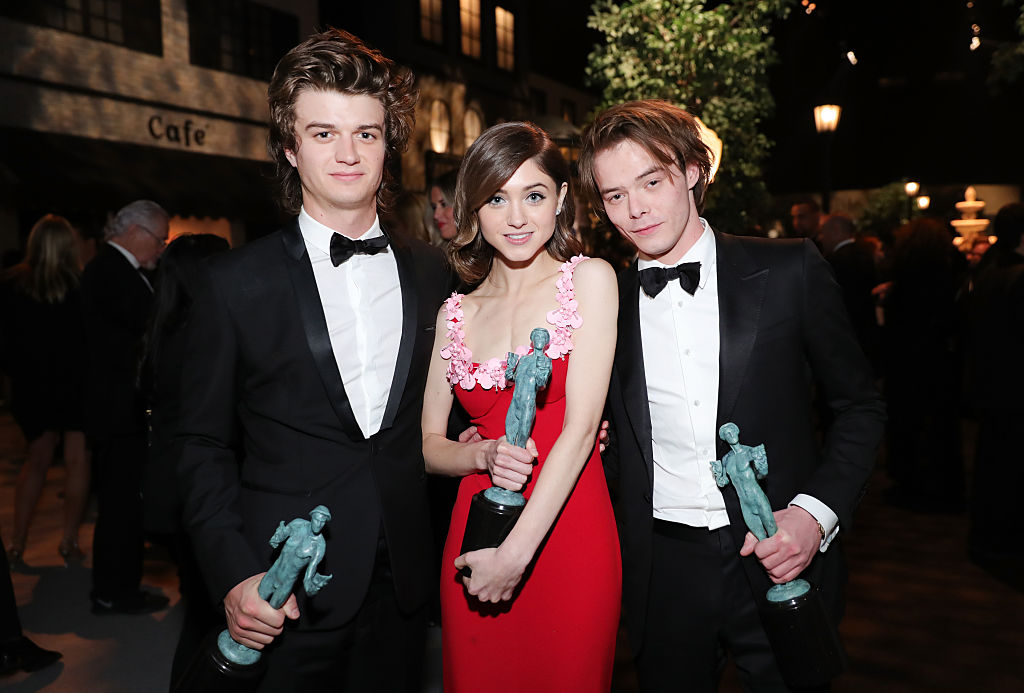 Oftentimes, young actresses struggle with looking age-appropriate. A cupcake dress looks too young, yet a skin-baring dress can look too old. Luckily, Natalia Dyer’s Miu Miu dress was the perfect mix between old and young. The fitted silhouette and wired bodice were undeniably sexy, yet the bold floral appliqué along the neckline added some sweet flair. To keep this look simple, the Stranger Things actress nixed the jewelry and opted for simple cat-eye liner. 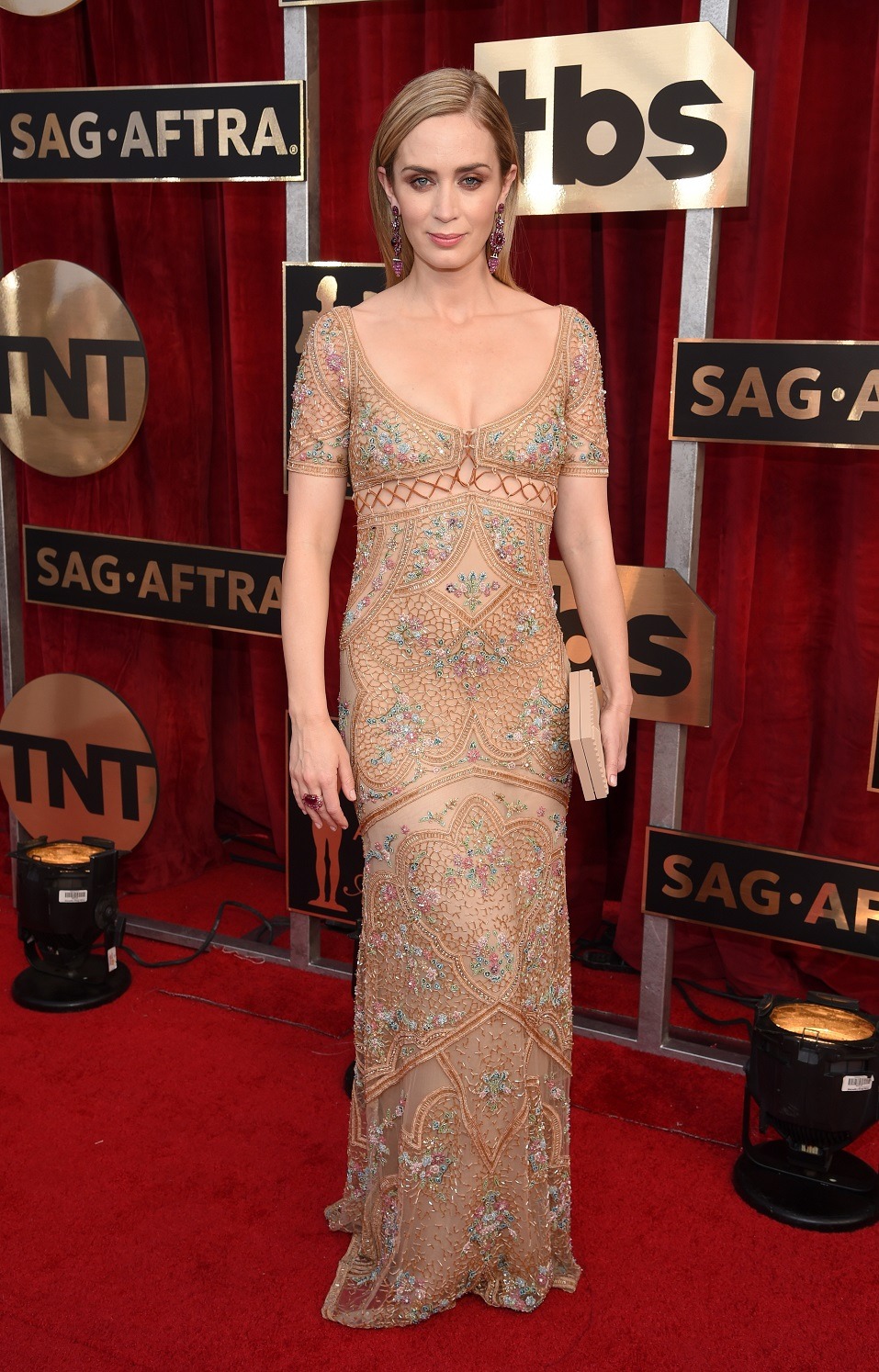 If you don’t love an overtly flowery look, you might like Emily Blunt’s dress. Blunt always brings her A-game to the red carpet, so naturally many loved her Roberto Cavalli dress. You might’ve been so fascinated with the tapestry-like pattern that you didn’t even notice this dress has tiny floral appliqués, but they exist. There’s a lot going on in this dress — the embellishments and intricate back detailing, for starters — but it was smartly paired with straight hair and simple (yet stunning) drop earrings. 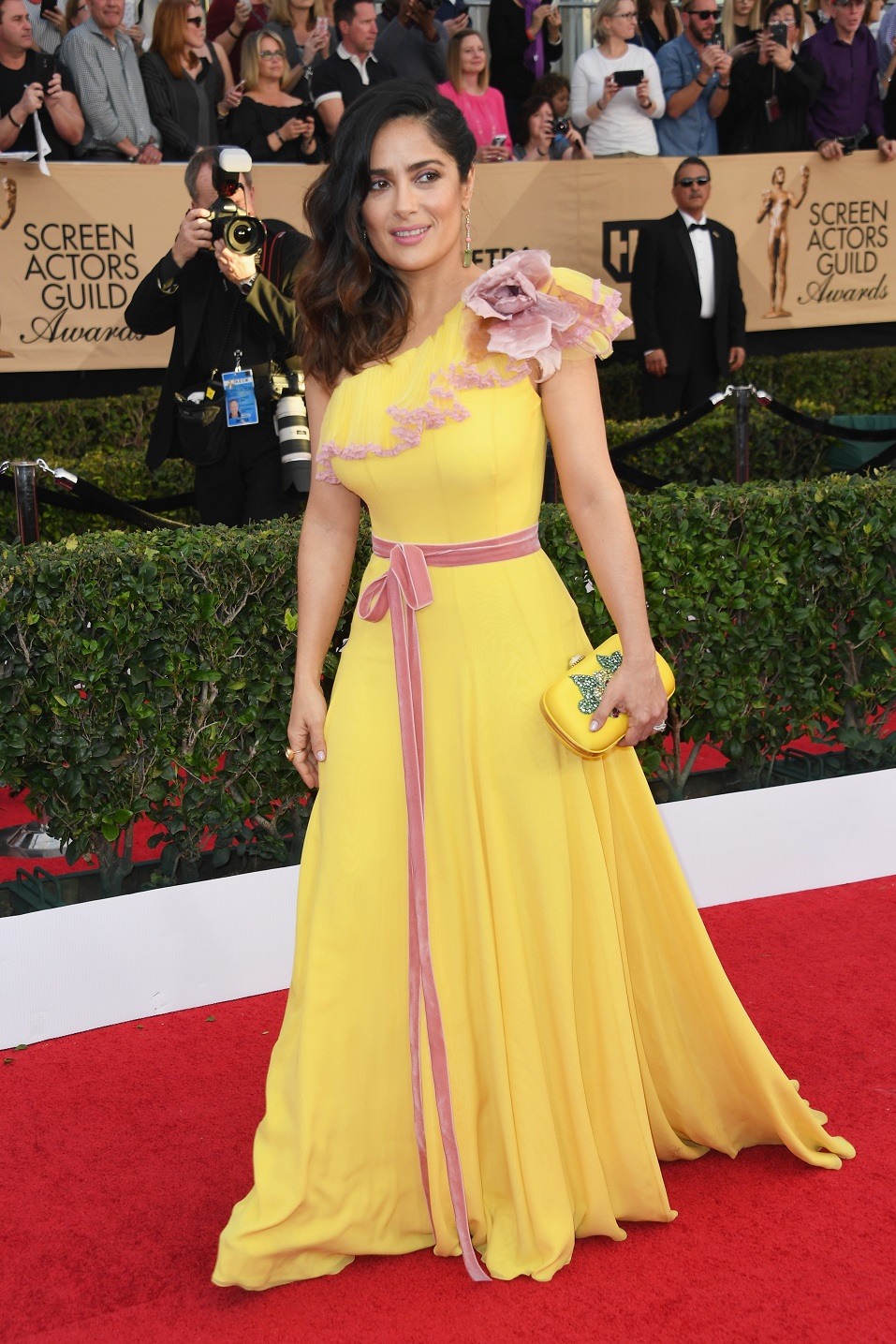 While florals was one of the biggest trends on last night’s red carpet, not every single outfit received our stamp of approval. Salma Hayek is one of those beauties who could wear a burlap sack and still look gorgeous, but this light yellow Gucci number completely missed the mark. From the oversized flower on the shoulder to the excessive ruffles to the coral piping, this ensemble looked more like a costume than a high-fashion gown. When getting dressed for a fancy occasion, less is always more.