6 Summer Style Lessons to Learn From the 1950s

There are plenty of style lessons to be learned from just about every decade of menswear (even the much-maligned but actually underrated 1970s). One of our favorite decades to look to for summer style inspiration is the 1950s, another era that many guys overlook thanks to its reputation for buttoned-up dress codes and locked-down formality. In reality, the decade that ushered in the birth of rock and roll, the rise of the Beat poets, the golden age of television, and the influence of abstract expressionism, pop art, and color field painting.

As Stuart Husband reports for Mr. Porter, the 1950s was the decade when some of today’s wardrobe staples — like the turtleneck, the knit polo, and the corduroy jacket — were “starting to come into their own.” Other 1950s innovations included the bowling shirt, the souvenir jacket, and the tropical print, which “continue to cut something of a countercultural dash more than half a century later.” Read on for the top style lessons you should learn from the 1950s.

1. A white tee is always a good choice

A white tee is one of the simplest and most versatile ways to channel 1950s summer style | Source: iStock

As Husband notes, the 1950s were the age during which the simple white tee “made the journey from military-issue undergarment to loud-and-proud, standalone outerwear,” signaling all the while that the wearer was rebelling against corporate society by appropriating the foundation of blue-collar clothing. A timeless white tee is one of the most iconic types of classic tees. If you find the right style, preferably one that’s cut trim with a flattering crew neck, it’ll be an endlessly versatile piece that you can wear either layered or by itself.

2. Selvedge or raw denim are as classic as ever

Raw and selvedge denim were a staple of midcentury workwear, and there are plenty of iterations of both styles still available today. Brands that still want to make jeans the same way that they were manufactured in the 1950s even make their denim on old shuttle looms, which yield narrower fabric and the selvedge you’ll see in a high-end pair of jeans. You can channel the 1950s with a dark pair of jeans that are trim (but never skinny), and you’ll quickly realize that while a pair of raw and/or selvedge jeans is an investment, they’ll wear in much better than a cheaper pair of jeans that comes pre-distressed.

3. Have fun with colorful tailoring 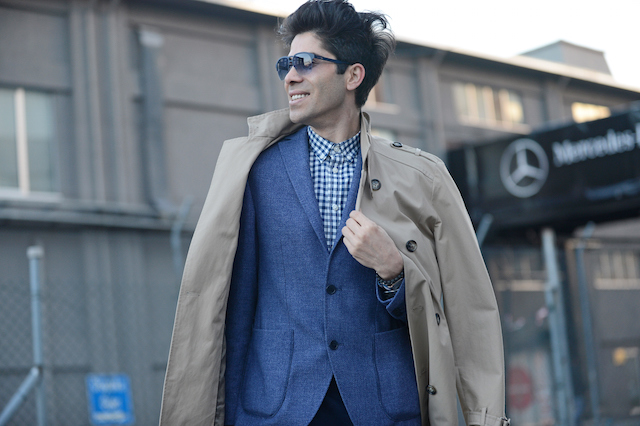 In the 1950s, cultural icons like Elvis Presley helped to loosen men’s dress codes by swapping the monotone suits and buttoned-up fabrics of previous decades for younger, more colorful versions. Husband notes that hats were replaced by quiffs, ties by button-down collars, and flannel suits with linen jackets. For a colorful take on tailoring half a century later, swap out your navy wool blazer for something that’s a bit more adept at blurring the line between formal and informal, with a vibrant color or a unique texture to make even the simple combination of a jacket and chinos more eye-catching.

4. Opt for heritage outerwear to protect you against the elements

You may not think that you need any outerwear for the summer, but just in case, know that the most stylish men of the 1950s would tell you to keep it classic. A robust jacket that’s built to stand up to abuse, while still looking like a classic addition to any outfit you throw it on over, is a good choice for the summer, whether you intend to embark on travels far from home or to stay close to your city. Whether you’re worried about rain, dirt, saltwater, or other forces of nature, opt for a jacket that’s hardwearing and preferably constructed by a company that’s been in the business for decades.

Choosing classic activewear, whether you’re working at the gym or running errands, is a great way to channel some midcentury style | Source: iStock

It was considered radical in the 1950s to don athletic wear somewhere other than the gym or the field — something that you might have a hard time believing given the recent trend toward “athleisure.” Fortunately for you, you can kill two birds with one stone by pairing a piece or two of classic athletic wear with other wardrobe staples. The look that would have been rebellious in the 1950s is fashion-forward today, particularly if you opt for pieces with classic military styling or vintage-inspired details.

6. Don’t be afraid of prints

If there’s one style lesson you learn from the 1950s, let it be that you shouldn’t shy away from prints. Take the Hawaiian shirt as a great example. The “aloha” print shirts that servicemen brought back from Hawaii in the 1950s became a cultural phenomenon. The tropical motifs added bright colors and fun patterns to men’s wardrobe, and half a century later, modern designers are still riffing on the prints that make just about any guy look like a midcentury movie star. From printed shirts to embroidered souvenir jackets, striped polo shirts to plaid jackets, there are plenty of patterned pieces that can help you channel some midcentury style.