In some cases, you can find a tablet that costs just $30. But are models with such low price tags really worth the purchase? | Source: iStock

For many consumers, there’s no reason to buy a tablet anymore. Smartphones are almost as big as tablets and laptops are almost as small, which makes it easy to forego a tablet if you only want to carry and maintain two devices instead of three. Even worse, many tablets fail to offer great software or even good multitasking features. Nonetheless, tablets can still be useful if you have a specific use in mind. There are a few cheap tablets under $100 that are worth the purchase, but if you need to go even cheaper, are you just going to waste your money?

There aren’t many great tablets at the $100 price point, and there are even fewer as your budget diminishes further. So if you’re searching for a tablet that costs only around $30, you may be wondering what you’re really going to get. $30 may not be a lot to spend on a gadget that ultimately isn’t as useful as you’d hoped. But nobody wants to go into a Best Buy purchase (or an Amazon transaction) knowing that they’re wasting their money. Ahead, we’ll take a look at seven tablets that cost around $30, and investigate whether they’re really worth their admittedly modest price tags.

The Digital2 Premier 7-inch tablet comes in at just over $30, and costs about $33 on Amazon. While it has a 7-inch screen, it’s supposedly powered by the Apple A4 chip (which debuted with the original iPad and later powered the iPhone 4). The device runs Android 4.1 and has only 1GB of RAM and 4GB of memory. This model was first launched in 2013, which along with the outdated specifications should make it pretty clear that this likely isn’t the right tablet even for the most budget-conscious tech lover.

When you search for sub-$30 tablets on Amazon, the Mach Speed Eclipse 4.3 is one of the few models that comes up. While $25 sounds like a bargain, bear in mind that this tablet is equipped with a screen that measures just 4.3 inches (smaller than many smartphones). It also runs Android 2.2, has only 0.5GB of RAM, features just 4GB of memory, gets only around 3 hours of battery life, and was first introduced in 2012 — which explains why it’s cheap but should also be a fairly strong warning that the device probably isn’t worth purchasing.

Ogima’s 7-inch tablet is another $33 tablet you can find on Amazon, though you’d be wise to think twice before purchasing it. While this tablet claims to feature “superior design, easy application and top performance,” it runs Android 4.4 and has just 512MB of RAM. It does feature 8GB of storage and a 1024×600 screen, but its 2,500mAH battery will only power the device for about four hours of web browsing. Additionally, the tablet is equipped with both a front-facing and a rear-facing camera, but they feature 0.3MP and 2MP systems respectively, which means that video calls or the occasional snapshot will leave a lot to be desired when it comes to resolution.

Polaroid may be a respected name when it comes to camera history, but the Polaroid S7BK S7 is a tablet you’ll probably want to avoid. It features a 1024×600 7-inch screen, but can’t access the Google Play Store without the user loading an update to their computer and then to the tablet. Additionally, it features only 4GB of storage and just a 1MP rear-facing camera. It was first introduced in 2013, but tech has changed significantly since then, and you’d likely be better off spending a little bit more to get a much better tablet.

Searching Walmart for a tablet around the $30 price point will lead you to the RCA 7-inch tablet, which runs Android 5.0 and features a quad-core processor. The device is equipped with 1GB of RAM and has 8GB of storage. Unlike older models, this tablet has enough battery power to last for up to six hours on a single charge, and you can access the Google Play Store to download your favorite apps. However, the device has only a 1MP camera, which means that it won’t be great for taking photos.

The Solotab S7Q was introduced in May 2016, which makes it a much more recent addition to the lineup of circa-$30 tablets than many of the other models available on Amazon. At $35, this model offers a quad-core processor and an 8GB hard drive. Surprisingly enough, you can also expand the device’s storage up to 32GB with a microSD card. This tablet also features built-in access to the Google Play Store, no updates required. However, it’s only equipped with 512MB of RAM and runs Android 4.4. 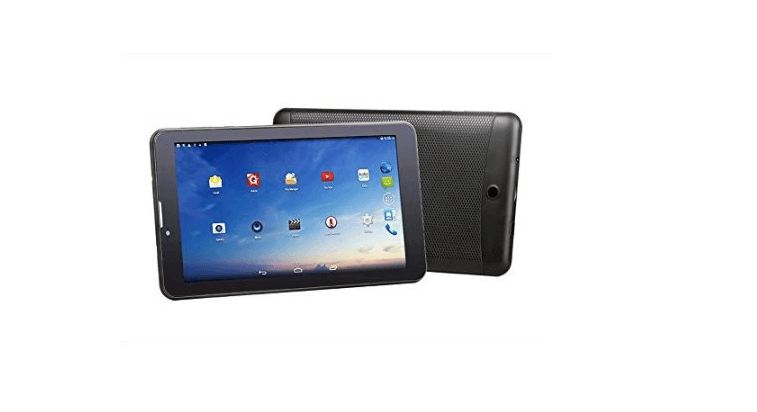 The WinnPad 73G is another $30 tablet you can find at Walmart. While it features only 512MB of RAM, it does have a dual-core processor and 4GB of onboard storage. It runs Android 4.2, and while it has a 7-inch touchscreen, that screen has a resolution of only 800×480 pixels. Nonetheless, this tablet can get up to 7 hours of battery life, which will come in handy whether you’re using your tablet to run your favorite apps, watch videos, or browse the web.