This Small Style Detail Is One of the Few Things Donald Trump Has in Common With John F. Kennedy

Donald Trump gets compared to many former presidents. But John F. Kennedy usually isn’t one of them. However, a recent photo taken of Trump during a conversation with survivors of school shootings revealed one surprising detail that links the two presidents: a monogram on Trump’s shirt cuff.

Read on to get all the details on the monograms that Donald Trump and John F. Kennedy wore. And discover the others ways that the two presidents either dressed alike or made very, very different style choices. 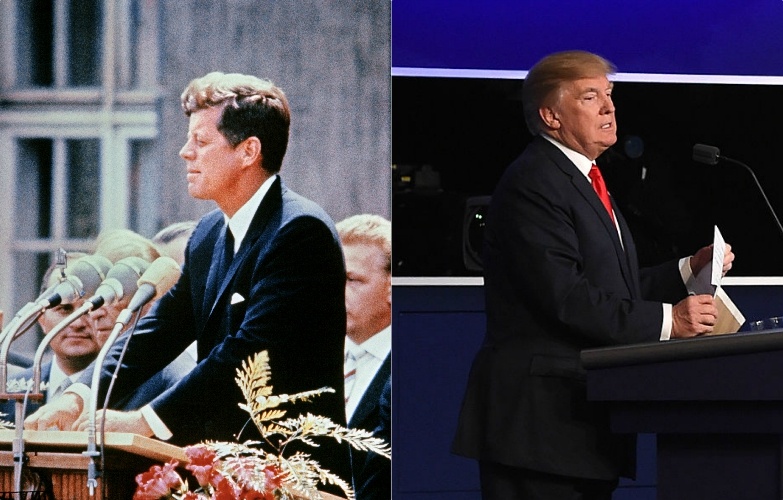 Donald Trump, on the other hand, doesn’t seem to shop at Brooks Brothers often. The New York Times notes that Trump often wears suits from Brioni and from Martin Greenfield (two labels that Barack Obama also wears). Trump’s association with Brioni dates back to 2004, when he wrote in one of his books that the brand supplied him with suits for The Apprentice. “I wear Brioni suits, which I buy off the rack,” he explained. Brioni even has a store in the Trump International Hotel in Washington.

Next: The two presidents also differed in their preferred suit cuts. 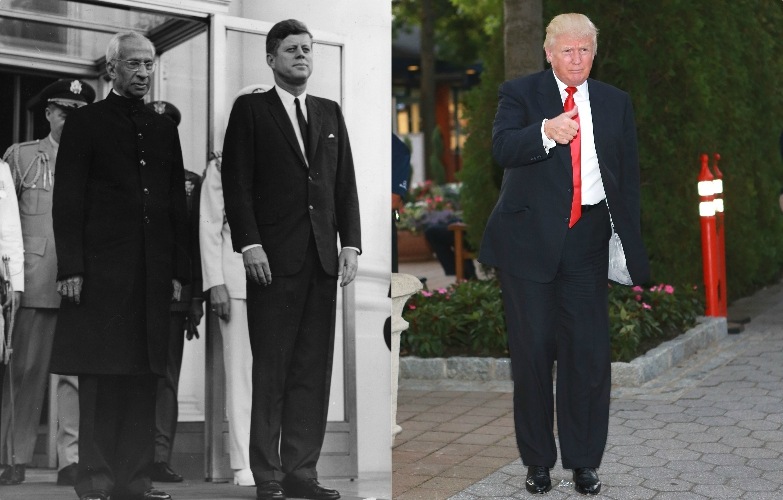 Gentleman’s Gazette notes that if you look at photographs of John F. Kennedy, you’ll notice that Kennedy wore his suits cut quite slim. Kennedy’s jackets usually had very little padding in the shoulders. Similarly, he wore slim pants without pleats. And as the Gazette notes, Kennedy “almost always wore a single breasted coat with two buttons, and most of the time he buttoned both of them.”

Donald Trump, on the other hand, doesn’t seem to like slim suits. The Independent notes that the proportions of Trump’s clothing have attracted criticism from many style experts. “His trousers are too baggy, his jackets are boxy, his ties are too wide and often too long, and his lapels are too big,” the publication explains. Trump could get those suits tailored, but it doesn’t seem to be a priority for him.

Next: Trump and Kennedy had this struggle in common when they went suit-shopping.

3. But John F. Kennedy struggled to find suits that fit, too 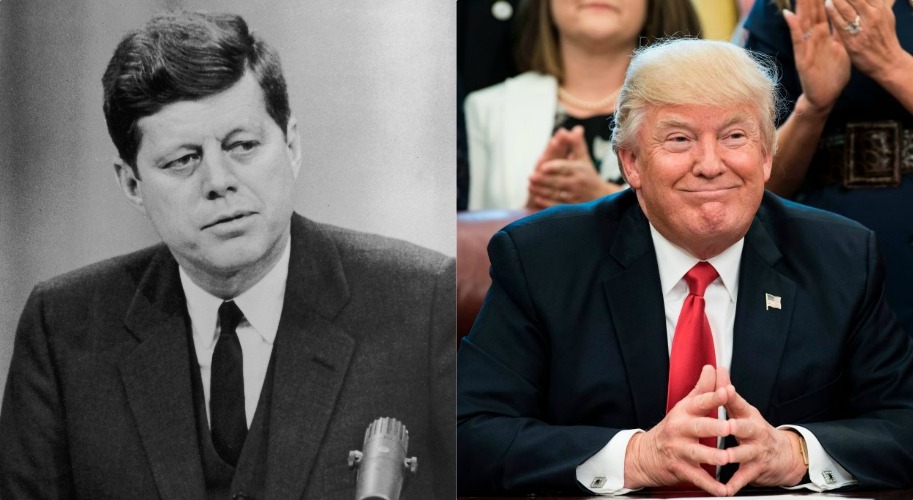 Left: JFK had his suits made for his frame. | Keystone/Hulton Archive/Getty Images, Right: Trump buys his off the rack. | Brendan Smialowski/AFP/Getty Images

As the Los Angeles Times explains, Kennedy didn’t like to spend a lot of time figuring out what he should wear. And when he assumed office, the top brass at Brooks Brothers noticed that Kennedy’s suits didn’t exactly flatter his slim frame. So they designed and produced a new, slimmer style that someone then suggested to the president. (Brooks Brothers gave the same treatment to Abraham Lincoln and Ulysses S. Grant, too.)

Donald Trump also seems to wear suits that aren’t particularly flattering. One Savile Row tailor suggested that if Trump is buying ready-to-wear suits — which Trump says he is — then he might be buying his jackets a size bigger in the shoulders to get them to fit in the waist. (That could explain how the shoulders look less-than-sharp.) Similarly, he seems to flatter a fuller cut of trouser for comfort, even though that look doesn’t particularly flatter someone of his stature.

Next: Here’s the small style detail that Trump and Kennedy share. 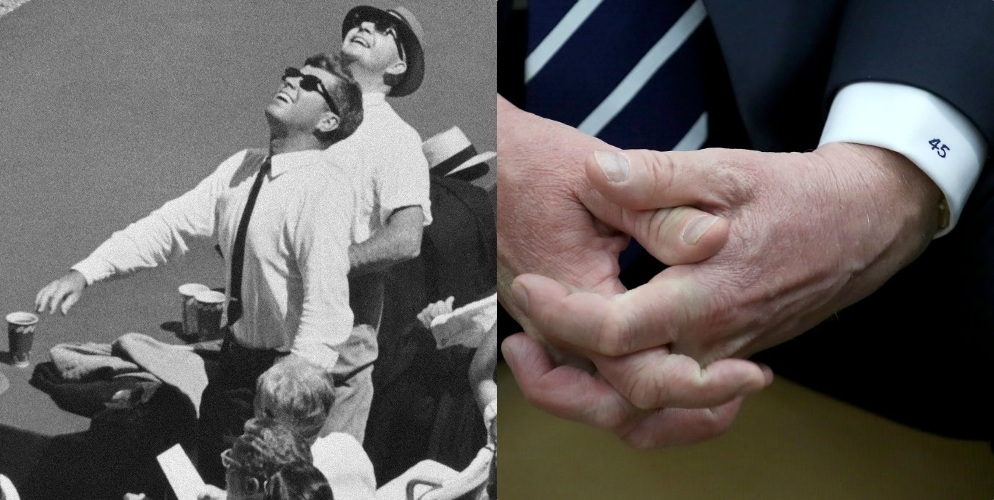 As Business Insider points out, Donald Trump has “45” embroidered on his shirt cuff. The monogram refers to Trump’s place in history as the 45th president of the United States. Monograms have their roots in preppy style (even if some style experts criticize them as a “signifier of social anxiety“), so it’s no surprise that John F. Kennedy was once photographed wearing a monogrammed shirt.

Unlike Trump’s shirt, however, Kennedy’s was monogrammed on the left breast. The monogram also featured Kennedy’s initials, not the number referring to his place in the order of American presidents. Many menswear experts say that you shouldn’t put a monogram on your shirt cuff because the placement is too distracting. Trump, however, doesn’t seem to mind. 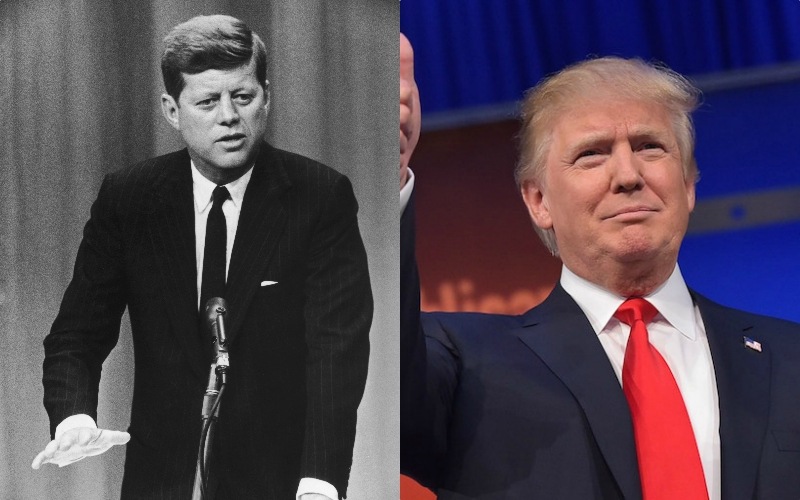 Gentleman’s Gazette reports that the young JFK wore a broad range of ties, including wool ties and knit ties. But he switched to all silk ties during his presidency. “One of his favorite neckwear colors was blue, which he wore in all shades,” the publication explains. One factor that didn’t vary much? The width of his ties. Following the slim look that was in style in the 1960s, Kennedy wore ties that were mostly around 2.75 inches wide.

On the other hand, style experts have criticized Donald Trump’s penchant for wide and long ties as one of his worst fashion faux pas. (The often joked-about habit has even spawned a Twitter account or two.) Despite Trump’s height and his choice of the wide Windsor knot, his ties hang much longer than would be ideal. Plus, Trump even uses scotch tape to secure the tail of the tie to the blade, to the chagrin of style aficionados everywhere.

Next: They made these very different style choices when away from the Oval Offices.

The Los Angeles Times notes that when he wasn’t working, Kennedy dressed like someone who was going to enjoy his weekend or his vacation. “From touch football games in faded chinos to seaside lunches in a cotton oxford shirt, Kennedy’s attire represented both an aspirational and athletic lifestyle,” the publication explains.

Donald Trump, on the other hand, doesn’t have the same penchant for dressing casually when he gets away from the Oval Office. He famously favors a suit and tie, even leaving his jacket on in many instances. The Washington Post reports that Trump doesn’t often do business casual — and definitely doesn’t wear jeans. He wears pleated khakis that look very much unlike Kennedy’s slim chinos. However, both presidents have worn polo shirts — Trump’s uniform of choice when he plays golf.

Next: Only one of these presidents had a watch collection respected by horological experts. 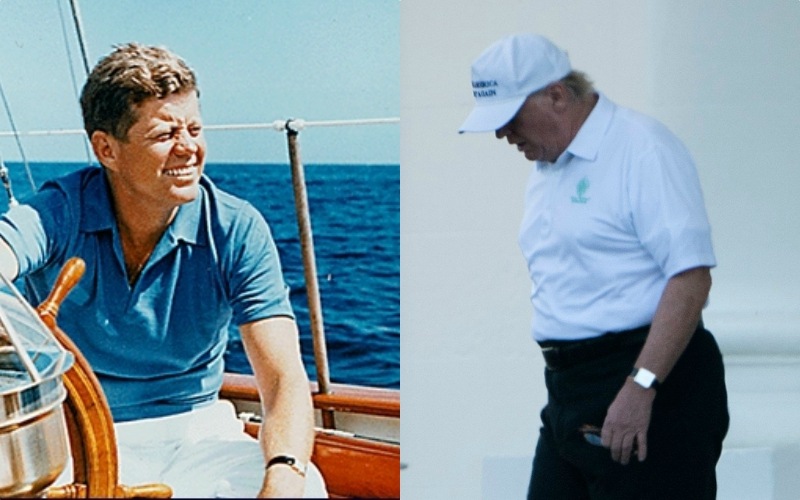 Many men invest in luxurious timepieces, including many presidents. John F. Kennedy had several iconic watches. WatchTime notes that Kennedy wore an Omega Ultra Thin when he took the oath of office. Jacqueline Kennedy gave the president a Cartier tank watch, which he was wearing when he was assassinated. He was also gifted a gold Rolex by the actress Marilyn Monroe.

Conversely, Timepiece Chronicle characterizes Donald Trump’s watch collection as “lackluster.” Despite the fact that Trump owns a private jet and numerous properties, he doesn’t seem to look at watches as a status symbol. He owns a thin yellow-gold watch, a larger gold watch that might be a Rolex, a Senna chronograph by Universal Geneve, an Azad Power Tourbillon, and a watch from the Trump Signature Collection Macy’s briefly sold.

Next: Only one of these presidents routinely wore hats. 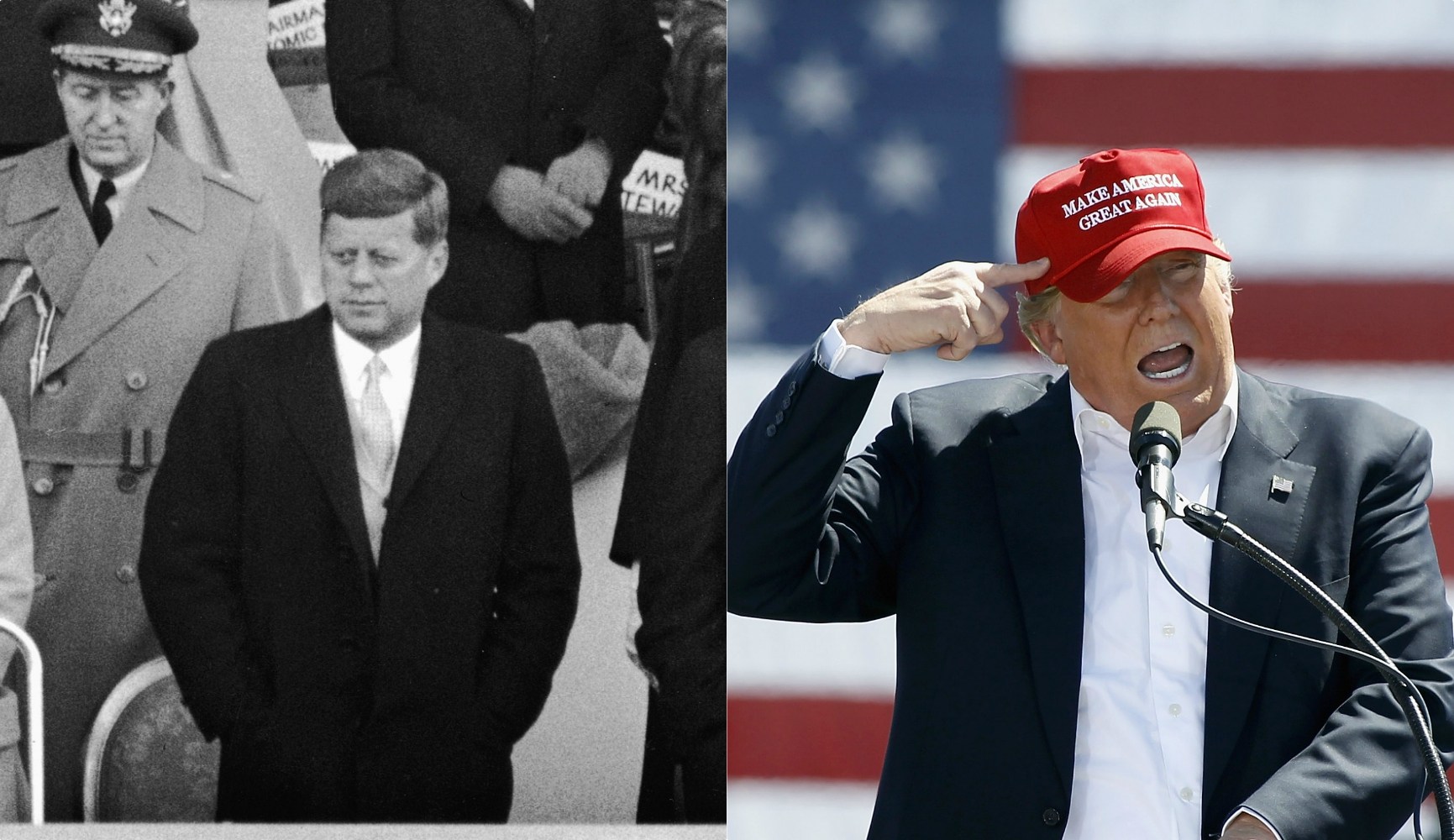 Left: He did wear hats, but not to the inauguration. | Hulton Archive/Getty Images, Right: Trump is known for his hats. | Ralph Freso/Getty Images

Primer Magazine notes that many people think of John F. Kennedy as “the man who killed the hat.” As the story goes,  Kennedy ended the tradition of American men wearing hats when he opted not to wear a hat during his inauguration speech. (As Snopes notes, Kennedy actually did wear a hat during other parts of the inauguration celebration.) Yet as NPR reports, “Fashionistas say Kennedy, one of our most charismatic presidents, made hats un-happen.”

Donald Trump quite famously wears trucker hats frequently, usually caps emblazoned with his campaign slogan, “Make America Great Again.” CNN reports that the hats “became an icon,” especially because Trump wore them frequently throughout his campaign. CNN notes that Trump began using the phrase as early as 2011, and the phrase had also been used by Ronald Reagan, George H.W. Bush, and even Bill Clinton. But as CNN explains, we’ll likely always associate it with Trump.

Read more: This Is the Most Loved U.S. President of All Time