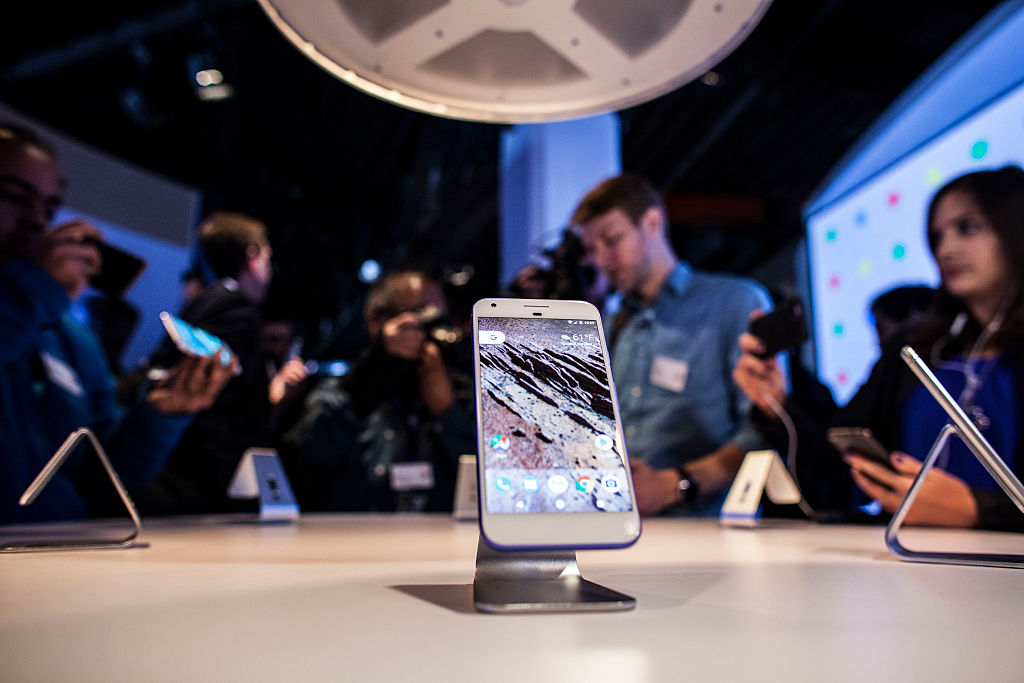 Google’s Pixel phone is an impressive new Android device. But there are a few things that Apple’s new iPhone 7 and iPhone 7 Plus can do that the Pixel can’t | Ramin Talaie/Getty Images

Determining ahead of time which smartphones are going to be the biggest successes can be tough, but Google’s brand-new Pixel phone should be a big hit. It has advanced hardware built by HTC, its camera beats those of every other phone tested by DxOMark, and it runs the latest and greatest version of Android. The Pixel should offer some pretty strong competition to the year’s best phones, like Samsung’s Galaxy S7, the HTC 10, the Motorola Moto Z Force Droid, and the iPhone 7. The fact that this great phone is from Google may have iPhone users reconsidering their stance on the iOS vs. Android debate. Users may even contemplate how bad the switch between iOS and Android would really be.

But if you’re a longtime iPhone user, you should know that there are a few things Apple’s latest iPhone can do that Google’s new Pixel phone can’t. (Aside from the obvious differences between two phones that run competing operating systems, since nobody needs to be reminded that they won’t be talking to Siri on a Google phone.) Sure, comparing any two phones reveals some areas where the first phone comes out on top, and other areas where the second one is the clear winner. There are some areas where the iPhone 7 and iPhone 7 Plus beat the Pixel and Pixel XL, but in other areas, Google reigns supreme.

The Verge’s Vlad Savov points out that “The Pixel isn’t everything we wanted, but it is definitely the device and strategy we’ve been demanding from Google for so long.” In other words, it’s an exciting new contender in the world of Android phones. The new Pixel is not without its shortcomings, however; there are a few areas where it doesn’t come out on top in the perennial competition between Google and Apple. Read on to learn more about how the two phones compare. Check out which features you’ll be foregoing if you opt for Google’s latest phone instead of Apple’s.

1. The iPhone 7 can give you some peace of mind with water resistance, but the Pixel can’t 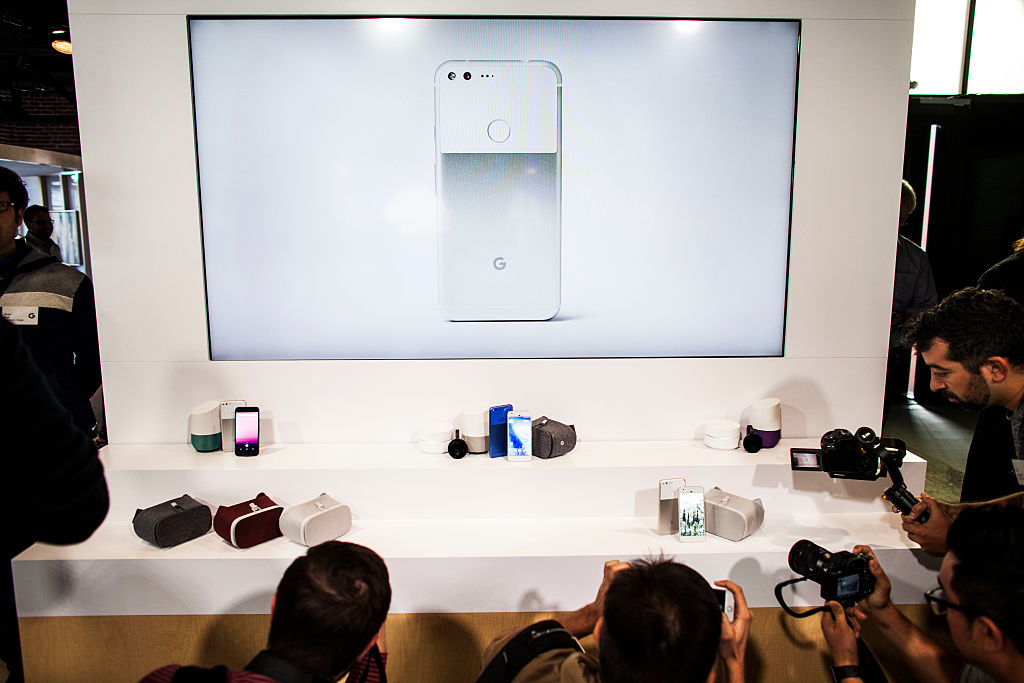 We’ve already talked about how you shouldn’t really treat the water resistance of the iPhone 7 as a feature. (Apple’s warranty doesn’t cover water damage.) Nonetheless, Apple did take the proverbial plunge and make the iPhone 7 water-resistant. It has an IP67 rating, meaning the device is technically capable of working one meter under water for up to 30 minutes. But as Chris Welch reports for The Verge, Google’s Pixel isn’t water-resistant. That’s what many will consider an “inexcusable” choice on Google’s part.

Apple’s latest iPhone will likely survive a drop in the pool or usage in an unexpected rainstorm. Many other smartphones are water-resistant. And still others, even without full water-resistance, use a nano-coating to protect their circuitry against liquid. But Google’s Pixel isn’t water-resistant at all. As Welch writes, “In previous years, the omission was perhaps understandable since Nexus phones (RIP) usually didn’t cost as much. But today Google made zero mention of any water safeguards on stage, and there are no surprises contained in the Pixel’s tech specs.”

Accidents involving water happen routinely, even to conscientious users who are extremely careful with their expensive devices. It’s ideal to choose a phone that can withstand a few encounters with water, even if it doesn’t officially have water resistance or an IP rating. Welch notes, “In a best case scenario, the Pixels might unofficially offer some level of water protection like the iPhone 6S did, but I’m not too hopeful on that.”

2. The iPhone 7 Plus features optical zoom and optical image stabilization, but the Pixel doesn’t 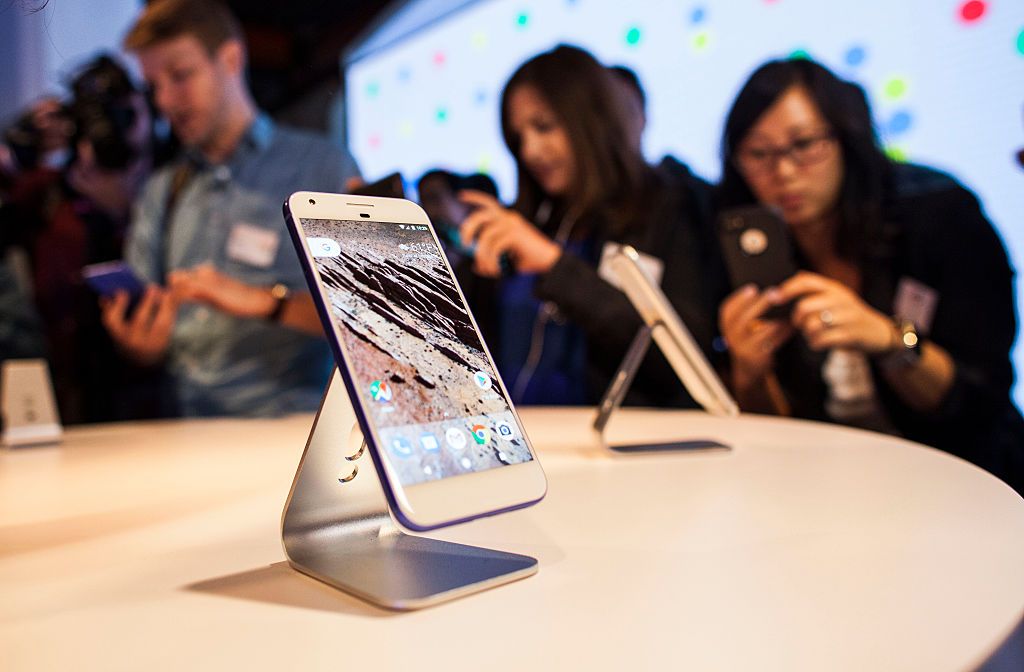 The iPhone 7 Plus features a dual-camera system. The two cameras, as Engadget’s Steve Dent reports, enable users “to do optical-like zooming, shallower depth of field to blur out backgrounds, and even Lytro-like selective focus.” The camera system also offers up to 2X optical zoom. Dent notes that 2X “may not seem like much, but is a lot better than the ‘nothing’ that most smartphones have.” The Pixel is one of those phones that doesn’t have optical zoom. That’s because it lacks the dual cameras of the iPhone 7 Plus. It also lacks a larger aperture lens or optical image stabilization. Additionally, it uses a two-element flash instead of the four LED flash on the iPhone 7.

This may not sound like a terrible omission, especially in the case of optical zoom. Plenty of phones don’t have the feature, right? But photos captured with digital zoom, instead of optical zoom, have lower resolutions and higher levels of pixellation. The type of zoom isn’t a smartphone camera’s most important characteristic, but if you’re an avid mobile photographer and want the flexibility of optical zoom, the iPhone 7 Plus is going to be a better choice than Google’s new Pixel.

A camera feature that more people might miss is optical image stabilization. According to The Verge, Google has “tied the camera to the gyroscope to eliminate the hand-shake ‘jelly’ effect in video.” But as Android Police’s Richard Gao points out, DxOMark’s review of the Pixel’s performance is contradictory on the topic of stabilization on video. Stabilization in the review’s video section receives a score of 91 and lists “good stabilization in all conditions” under the Pros column. But the review also notes that “slight judder and jello effect are sometimes noticeable.”

3. The iPhone 7 supports Wide Color gamut, and the Pixel doesn’t 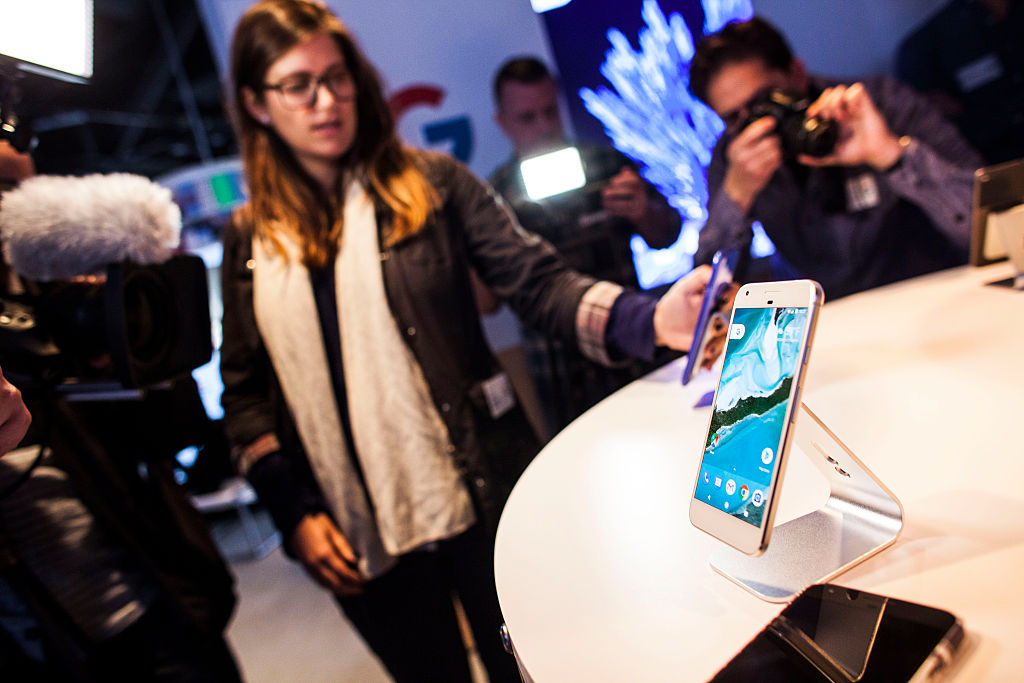 Google’s new Pixel phone doesn’t support Wide Color, while the iPhone 7 has both a Wide Color display and a camera system that can capture Wide Color images | Ramin Talaie/Getty Images

Daniel Eran Dilger reports for Apple Insider that one of the iPhone 7 features that the Pixel lacks is a Wide Color display. Android itself lacks software support for DCI-P3 Wide Color gamut, “a primary feature Apple added to iOS and is supporting on iPhone 7 and 7 Plus models.” A Wide Color display reproduces more of the colors that are visible to the human eye. The iPhone 7’s cameras capture Wide Color images, and the iPhone 7’s display accurately reproduces it. Dilger notes that support for Wide Color is “also required throughout the operating system, and developers need APIs to take advantage of this. Despite aspiring to control the whole widget like Apple, Google didn’t do any of the hardware or software work to bring DCI-compliant wide color support to its Pixel phones.”

DisplayMate reports that the iPhone 7 “excels due to its record absolute color accuracy, which is visually indistinguishable from perfect, and is very likely considerably better than any mobile display, monitor, TV or UHD TV that you have.” DisplayMate reports that the iPhone 7’s DCI-P3 Wide Color support makes the screen the “most color accurate display that we have ever measured.” Though the jury is still out on the quality of the Pixel’s display, Dilger notes that neither Google nor HTC has a reputation for delivering accurate color on high-quality displays on par with those manufactured by Apple or Samsung.

Curious about other screen-related features that the iPhone 7 has and the Pixel phone doesn’t? There’s 3D Touch. There’s also the Taptic Engine, which provides haptic feedback in conjunction with 3D Touch. And you can’t forget system-wide haptic feedback and custom haptic ringtones. But both 3D Touch and haptic feedback are hardware features. So it’s not possible for future Android releases to add those features (or Wide Color gamut support, for that matter) to Google’s Pixel phones. 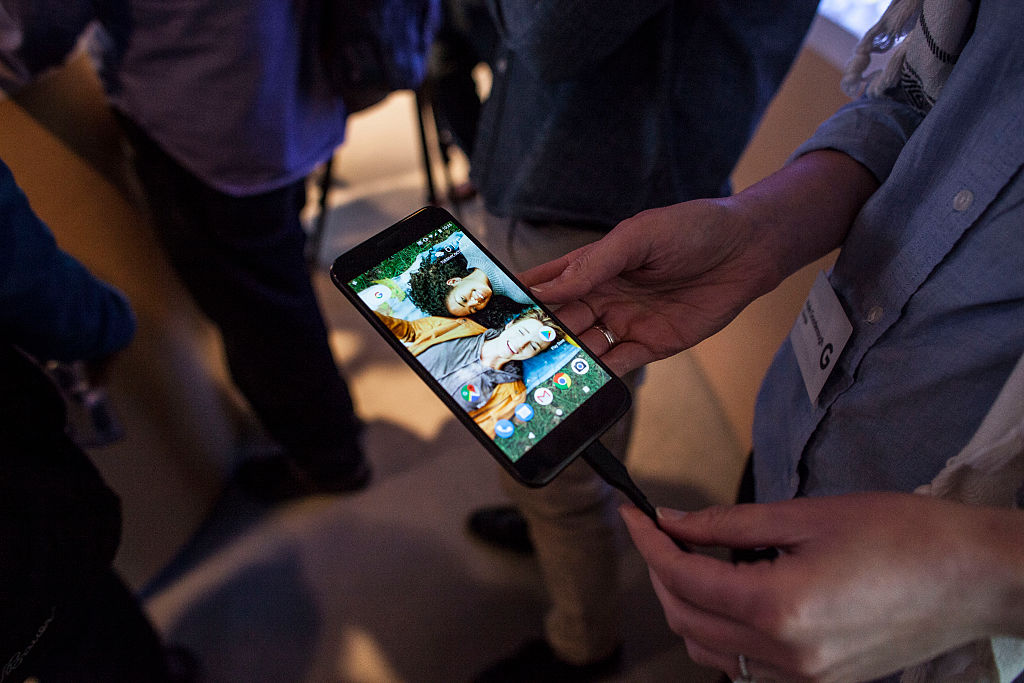 Benchmarks don’t offer the whole picture. But it’s telling that, as Chris Smith reports for BGR, the iPhone 7 “crushes Google’s new Pixel phones.” AnTuTu’s rankings for September show that Apple’s new A10 Fusion processor enables the iPhone 7 to significantly outperform the LeEco Le Pro 3, a phone that uses the same Qualcomm Snapdragon 821 processor found in the Pixel and Pixel XL. The iPhone 7 Plus and iPhone 7 took the top two spots, with scores of 172644 and 170124. And with a score of 160856, the LeEco Le Pro 3 came in third.

As Smith explains, “That means the iPhone 7 will beat the Pixel in similar tests as well.” Geekbench 4’s scores offer confirmation of that hypothesis. Google’s Pixel scored 1580 on the single-core test and 4100 on the multi-core test. But Apple’s iPhones scored 3430 and 5600. Smith notes that the only device that outscored the iPhone 7 was the iPad Pro, with an AnTuTu score of 177266. Again, benchmarks don’t offer the whole picture as to how devices perform in real life, but Smith notes that real-life tests have also proven “that the iPhone 7’s rivals are no match for Apple’s latest phones. The iPhone 7 is consistently faster than the Galaxy Note 7, and therefore faster than most high-end devices that pack similar hardware.”

Nonetheless, Apple Insider’s Mike Wuerthele points out that benchmarks aren’t a perfect representation of day-to-day speed. They don’t measure user interface elements well. But they’re useful for comparing the raw processing power between two devices. In this case, the hardware is Pixel’s Snapdragon 821 CPU with two cores running at 2.15GHz and two running at 1.6GHz, and the iPhone 7’s A10 Fusion processor with two high-performance cores running at 2.34GHz and two high-efficiency cores. RAM is also a factor. Daniel Eran Dilger reports for Apple Insider that the Pixel XL has 4GB of RAM, versus 3GB in the iPhone 7 Plus. That’s “an issue because Android does a far worse job at managing memory” than iOS. 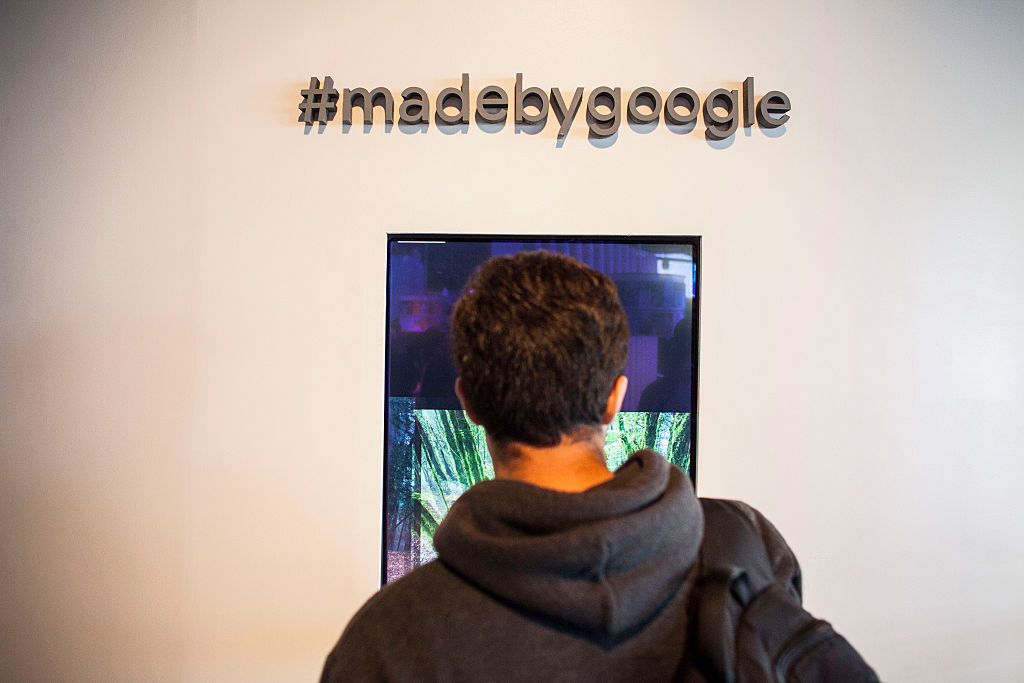 I said that I wouldn’t go there. But sometimes, we do need to be reminded of the obvious things. Android isn’t iOS. So you won’t be talking to Siri when you complete a voice search, and you’ll have to get used to camera controls that are different from those in iOS’s camera app. Is learning a new operating system a big deal? Absolutely not. But longtime iPhone users won’t immediately know where everything is in Android. The Pixel gives you what The Verge’s Dieter Bohn characterizes as Google’s “opinionated” take on Android.

While the Nexus was thought of as “Pure Android,” this is very much Google’s take on it. That means that it has a custom launcher with a button for Google searches up top, next to the weather and time. You can long-press on the newly circular icons to get quick shortcut items, which themselves can be turned into discrete items directly available on your home screen. You slide up to get to the application drawer and slide down to get to the notification drawer. And now you can also slide down on the fingerprint sensor on the back to get to notifications quickly, too.

You can slide right to access Google Now, or long-press the home button to launch the Google Assistant. A pane will show up on the bottom of the phone, and you can ask a question. (You can also ask follow-up questions, or get information, or get told a joke). Plus, Nougat offers features that you can’t get on an iPhone. Those include a file manager and the ability to use two apps via a split-screen mode. But none of Apple’s apps, aside from Music, are available on Android. So iPhone users thinking of making the switch will need to get used to alternate apps.