Curious about how the new iPhone 7 differs from 2015’s iPhone 6s? Here are all the new features that the iPhone 7 has, and the iPhone 6s doesn’t. | Stephen Lam/Getty Images

We spent months awaiting the arrival of the iPhone 7, regularly consulting the oracle of the Apple rumor mill to determine which features would make it onto this year’s iPhone and making offerings to the supply-chain-leak gods for a better chance at knowing what the future (iPhone) would hold. But the iPhone 7 release date has come and gone. At an event at San Francisco’s Bill Graham Civic Auditorium, Tim Cook took the wraps off of Apple’s most exciting iPhone to date. Ahead, check out seven things that the new iPhone 7 can do that the iPhone 6s can’t.

1. The new iPhone 7 can take better photos than the iPhone 6s 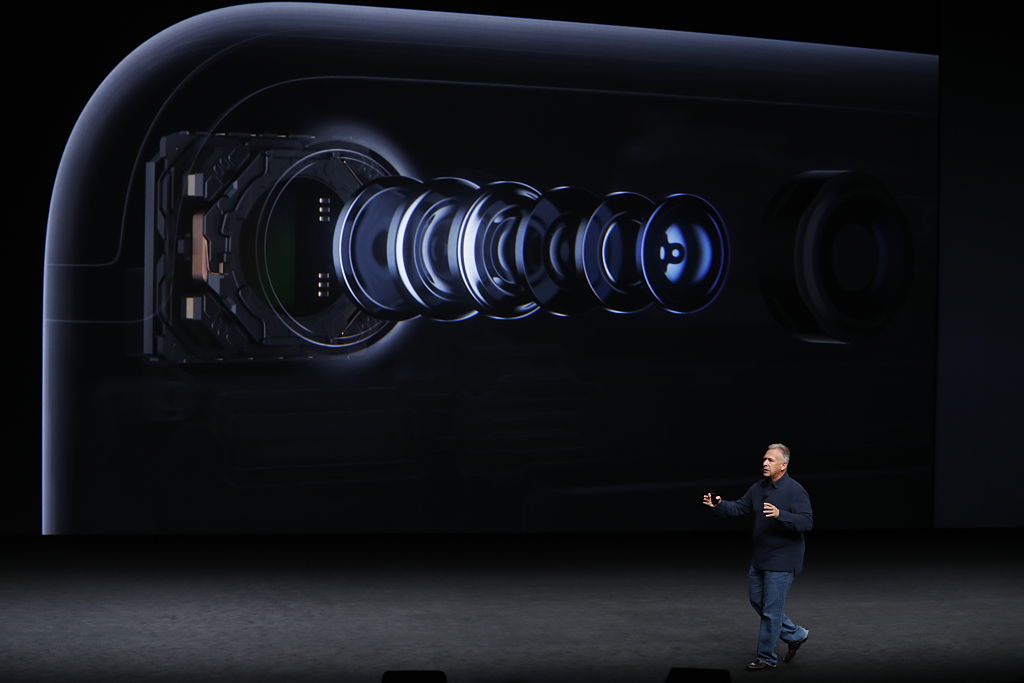 If you’re considering whether you should upgrade from an iPhone 6s to an iPhone 7, one of the big differences you’ll need to consider is the camera. The new iPhone has a 12MP camera with optical image stabilization for both the iPhone 7 and the iPhone 7 Plus (versus only the iPhone 6s Plus). Though the 12MP sensor is the same resolution as that of the iPhone 6s, the iPhone 7’s sensors is 60% faster and 30% more efficient than last year’s version. The new iPhone 7 also features a lens with a larger f/1.8 maximum aperture, which lets in 50% more light than the f/2.2 lens on the iPhone 6s, plus a six-element lens for brighter and more detailed photos and videos. It also features wide color capture for more vibrant colors and more detail.

The camera is also equipped with a new Apple-designed Image Signal Processor that completes more than 100 billion operations on a photo in just 25 milliseconds. Phil Schiller refers to the ISP as a “supercomputer for photos.” The quad-LED True Tone flash is 50% brighter than that of the iPhone 6s and now includes a flicker sensor to compensate for the flickering of artificial lighting. And the FaceTime camera is upgraded to 7MP and features wide color capture, advanced pixel technology, and auto image stabilization for better selfies.

Additionally, the new iPhone 7 Plus is equipped with the same 12MP wide-angle camera as the iPhone 7, plus a 12MP 56mm-equivalent telephoto camera. Combined, these two cameras offer optical zoom up to 2x and digital zoom up to 10x. Thanks to a free software update later this year, the iPhone 7 Plus also gains a new depth-of-field effect that uses both cameras — plus machine learning technology that maps the image and separates the background and the foreground — to mimic the bokeh seen on portraits taken with DSLRs and other high-end cameras. Talk about a great way to take your Instagram shots to the next level.

2. The iPhone 7 offers better performance than the iPhone 6s 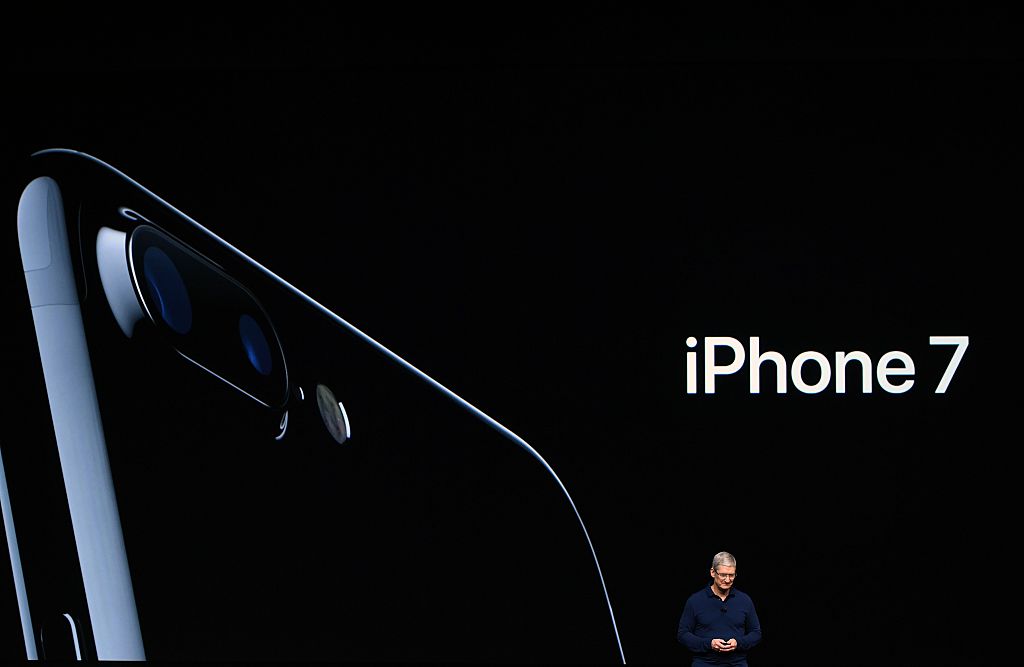 In addition to a more sophisticated camera system, the new iPhone 7 also offers more advanced performance for all of the tasks that you complete on your iPhone. The new A10 Fusion chip features a new architecture and is what Apple claims is “the most powerful chip ever in a smartphone.” The A10 Fusion CPU has 3.3 billion transistors and four cores: Two high-performance cores that run 40% faster than the A9 chip and two times faster than the A8 chip (which means that they’re 120 times faster than the original iPhone), and two high-efficiency cores that can run at just a fifth of the power of the high-performance cores in order to enable longer battery life. (If you’re curious, we’ll talk more about battery life on the next page.) Apple-designed performance controllers ensure that the right processes are running on the right cores.

Additionally, the new iPhone 7 is equipped with a new graphics chip that’s 50% faster than that of the A9 and three times faster than that of the A8, while consuming two-thirds of the power used by the graphics of the A9 and half the power of the A8. Apple made a point of demonstrating that these brand-new internals enable apps and titles that haven’t been possible on smartphones before, like “console-level gaming” and a new level of professional apps (like Adobe Lightroom, which can now perform raw editing of image files and provide most of the functionality found in the desktop version of the app). Finally, both the iPhone 7 and the iPhone 7 Plus support up to 25 LTE bands and LTE Advanced for data rates that are three times faster than the iPhone 6, up to 450Mbps.

3. The new iPhone 7 gets longer battery life than the iPhone 6s 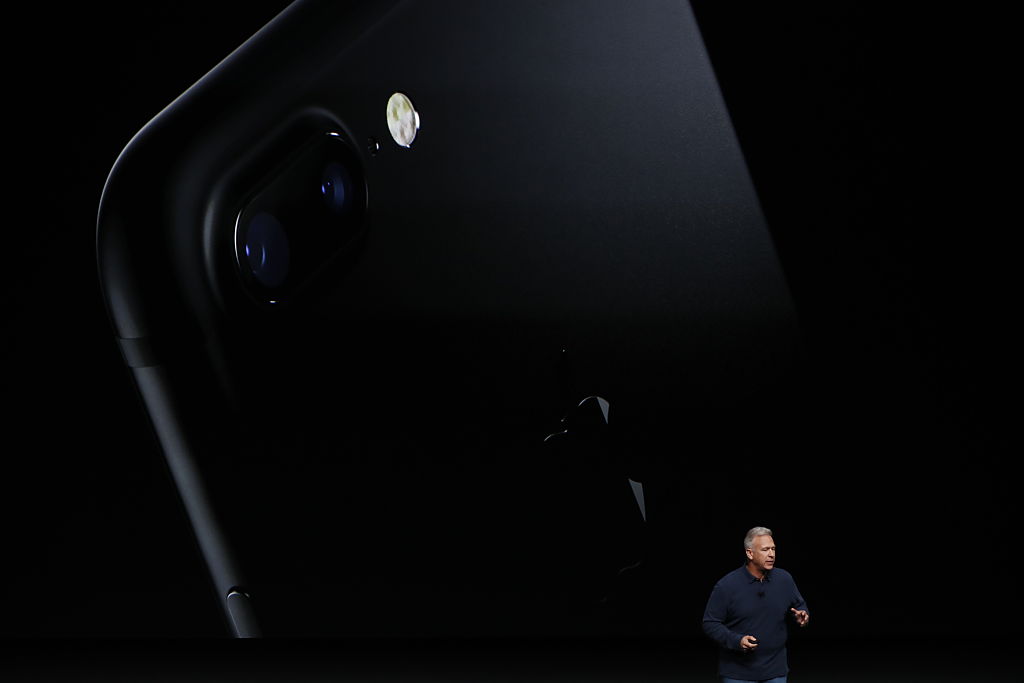 4. The iPhone 7 delivers more immersive sound than the iPhone 6s 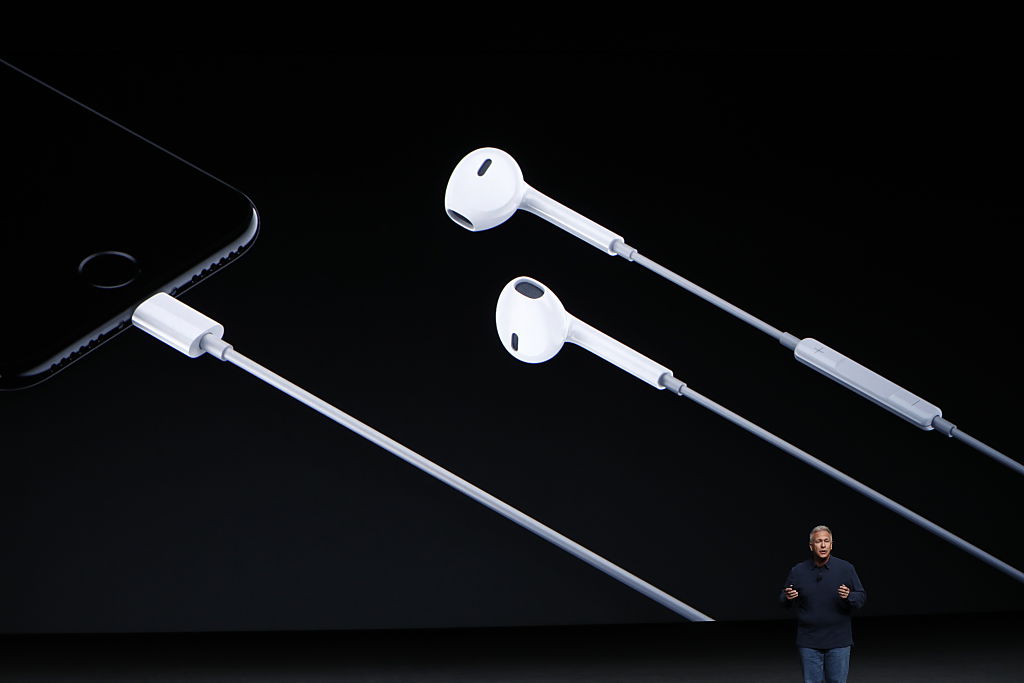 Phil Schiller introduces Lightning headphones for the iPhone 7, which has a Lightning connector plus stereo speakers | Stephen Lam/Getty Images

There’s nothing wrong with the speaker in the iPhone 6s, but the iPhone 7’s speaker system is much more advanced. The new iPhone is equipped with stereo speakers to offer immersive sound that’s up to two times louder than that of the iPhone 6s and offers an increased dynamic range of sound. The iPhone 7 also offers a higher quality speakerphone than the iPhone 6s.

A big change that comes with the iPhone 7 is the transition away from the legacy 3.5mm headphone jack. Instead of keeping the traditional headphone jack, Apple has switched to a Lightning connector. That means a new pair of EarPods that use the Lightning connector to deliver better sound. Those new EarPods are included right in the box with the iPhone 7, along with a 3.5mm headphone jack adapter, just in case you want to continue to use your favorite headphones and accessories.

5. The new iPhone 7 offers a more refined design (and more color options) than the iPhone 6s 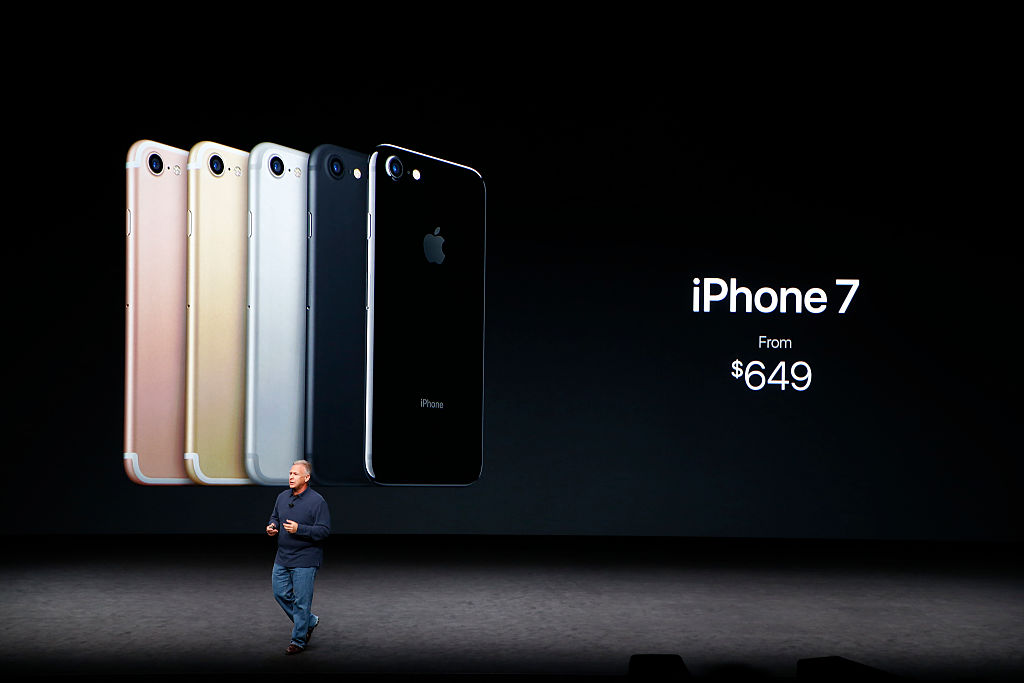 The iPhone 7 and iPhone 7 Plus are offered not only in silver, gold, and rose gold finishes, but also in two new black finishes: Black, which has an anodized matte finish, and Jet Black, which offers a high-gloss look. Apple made sure that everyone in attendance understood that the new jet black finish is achieved through an extensive nine-step process of anodization and polish.

Even better than the new colorways (and the toned-down antenna lines) is the fact that a re-engineered enclosure makes the iPhone 7 water and dust-resistant, with an IP67 certification. That means much more protection against spills and splashes than what the iPhone 6s can offer. The iPhone 7 is also equipped with a new, solid-state Home Button that’s more durable, more responsive, and more reliable. That all-new Home button works in cooperation with a new Taptic Engine to offer more precise and customizable tactile feedback, with a wider range of frequencies. The new Taptic Engine can even be programmed for third-party apps so that you get great haptic feedback in a variety of apps.

The iPhone 7 also features a brighter, more colorful Retina HD display, with wide color gamut that offers cinema-standard colors, better color saturation, and what Apple claims is the best color management in the smartphone industry. That means that you’ll be able to enjoy the great colors captured by the new, advanced camera system, plus the gorgeous graphics enabled by the new chip.

6. The iPhone 7 gives you more storage than the iPhone 6s 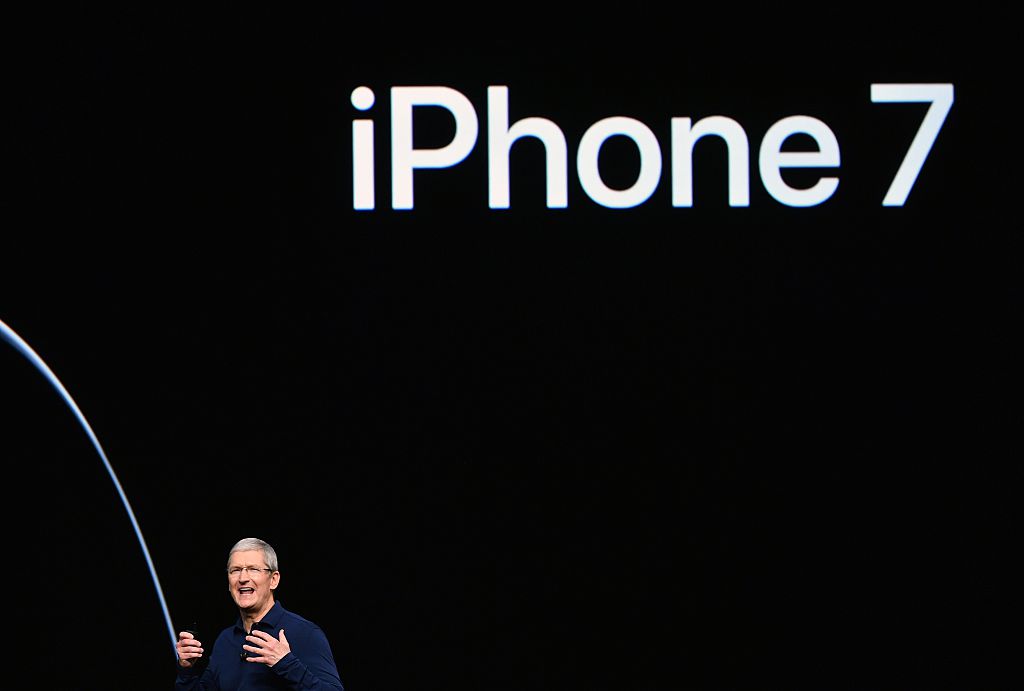 Especially if you’re used to a 16GB iPhone, the iPhone 7’s extra storage will make it much easier for you to download and install future iOS releases. Though with iOS 10’s big update to Messages, Siri’s ability to work with apps, expanded 3D Touch abilities, redesigned apps (including Maps, Music, Photos, and News), and the new Home app for HomeKit, we’re going to need a little bit more time to get over iOS 10 and get excited about next year’s version of iOS.

7. The new iPhone 7 can offer you the latest Apple technology, something the iPhone 6s just can’t do 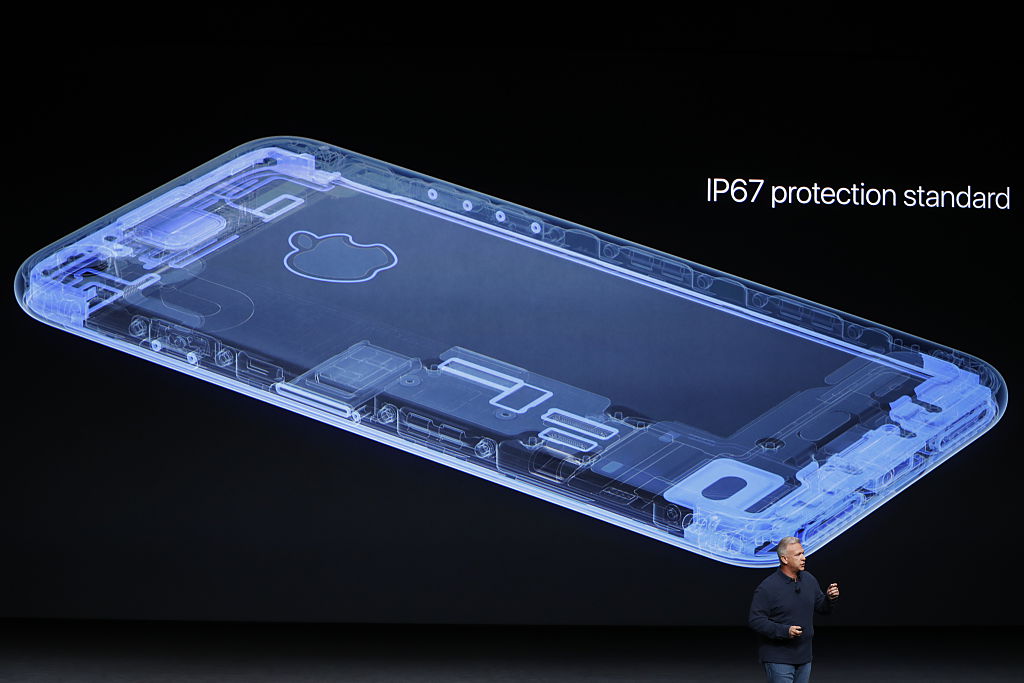 Even if the performance improvements aren’t important to you, the more sophisticated camera isn’t that appealing, the water resistance doesn’t seem like a necessity, and the more immersive colors and sound don’t look that mind-blowing, it’s true that only the iPhone 7 can offer you the latest of Apple’s technology. Sure, you can download iOS 10 on your iPhone 6s, which will give you plenty of new features to enjoy.

But there are plenty of Apple fans (you know who you are) who just have to have the latest iPhone each year. There’s nothing wrong with wanting the latest and greatest from one of the world’s most exciting tech companies, and many of the iPhone’s features are more fun to experiment with in real life than they look onstage.