The first rule of fashion? There are no rules. Certainly none that Rihanna abides by anyway. The Barbadian songstress is renowned for her boundary-pushing style that’s nothing short of head-turning. After all, she’s never met a fashion faux pas she didn’t find worthy of wearing.

Such rebel-laced, unorthodox style has even led to her own series of capsule collections, including those for River Island and Fenty x Puma by Rihanna — clearly, her rule-breaking tendencies are catching on.

In the words of actress Katharine Hepburn: “If you obey all the rules, you miss all the fun.” And, when it comes to style, those would be the words to define Rihanna’s sartorial playbook. Here are 14 times Rihanna broke the fashion rules and still managed to look incredible.

1. Wearing your bathrobe in public 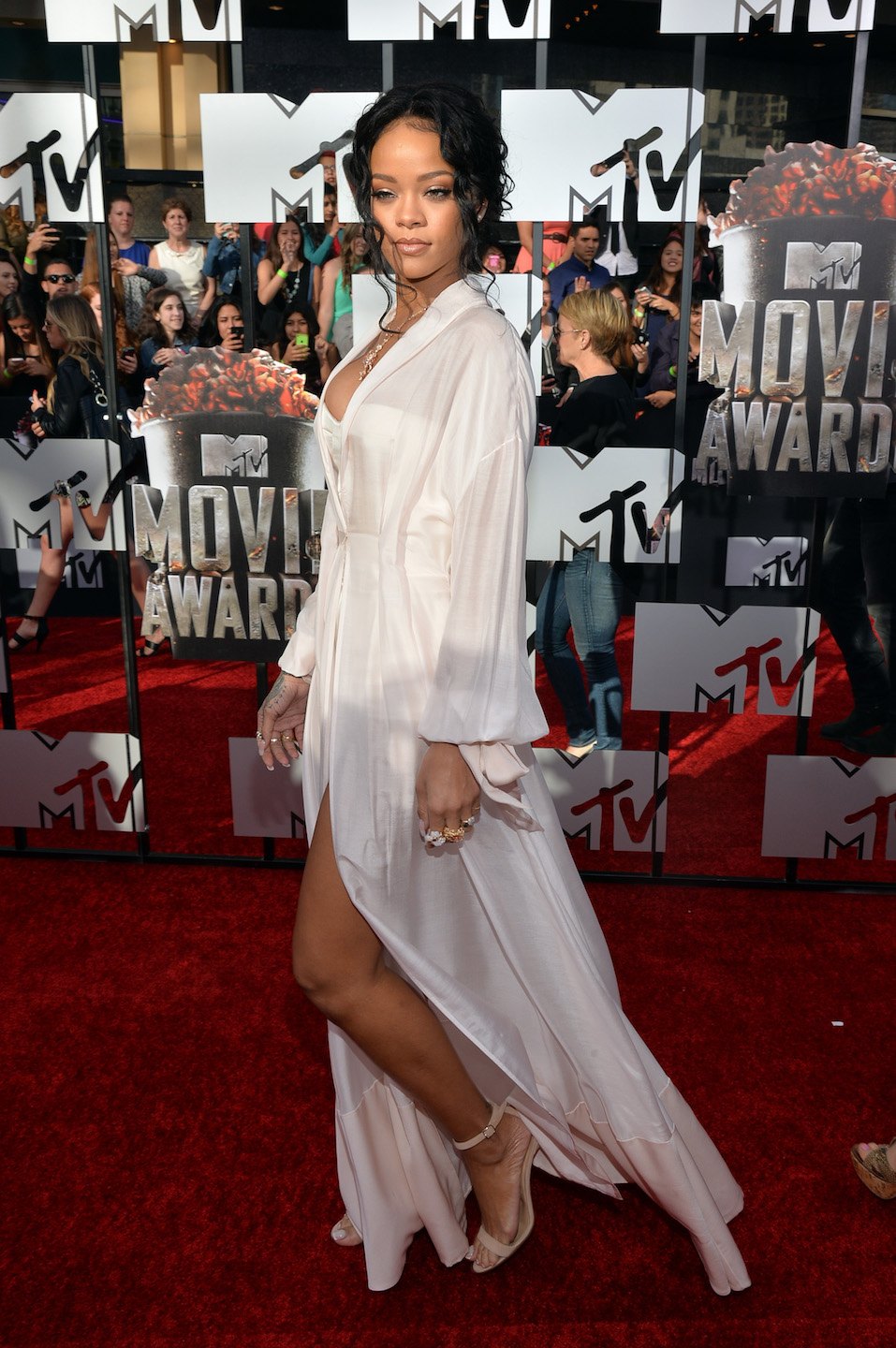 Bringing sexy, boudoir looks to the red carpet is nothing new. Even pajama-inspired ensembles have been popping up lately. But at the 2014 MTV Movie Awards, Rihanna was an early adopter and even then took it a step further by wearing nothing short of a glorified bathrobe for the awards show in Los Angeles. Yet, it was nothing short of a sultry, sophisticated statement that even boasted of a softly romantic quality. 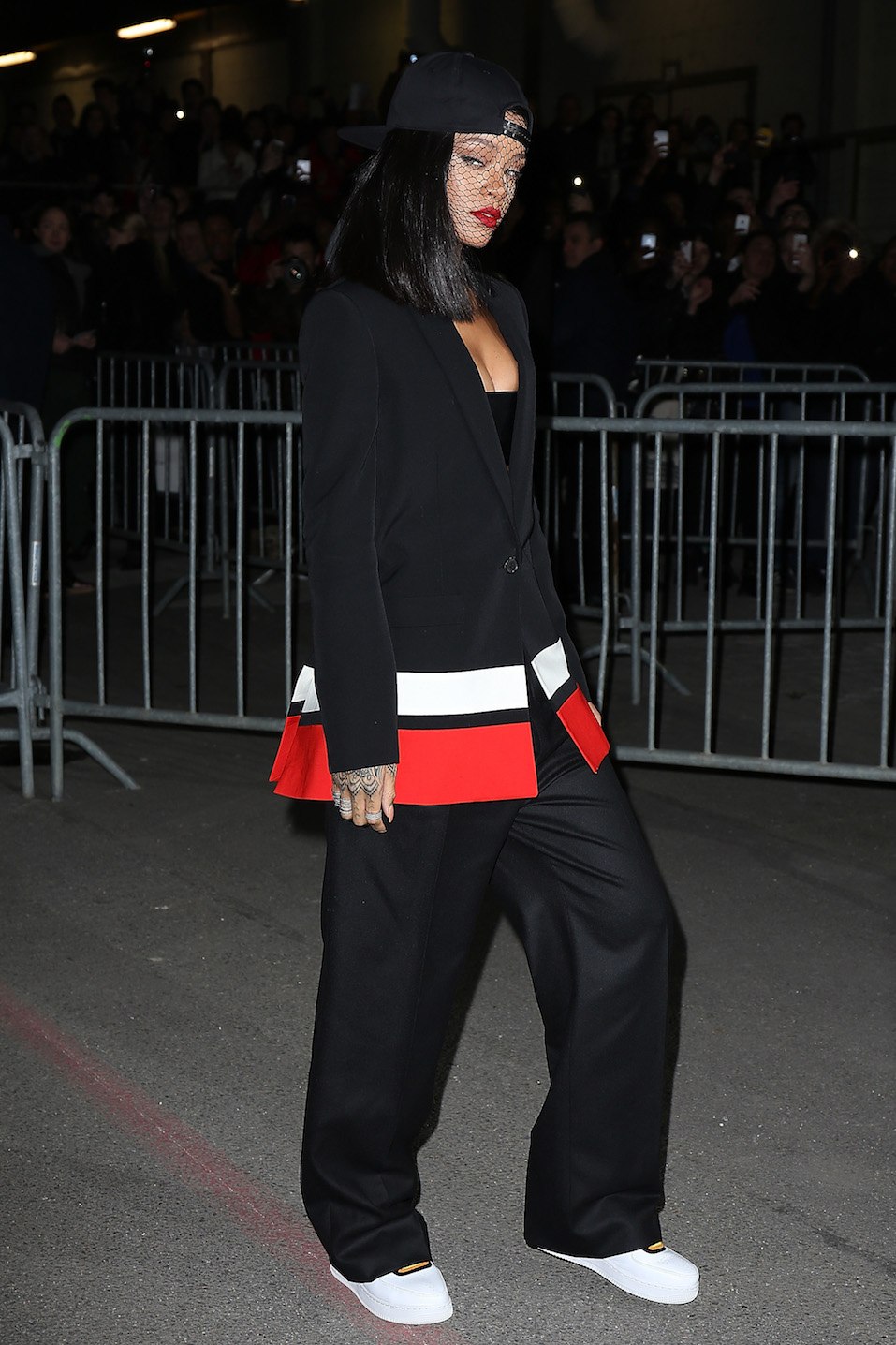 It’s not uncommon to see RiRi rocking an ensemble of oversized proportions. Nor does she see the need to follow the style law of proportions that dictates a smaller silhouette up top to balance out baggy pants, or vice versa. But, even with the excess fabric, she never seems to get lost in the folds. While at Paris Fashion Week in March 2014, she showed off a perfect example. A loose, roomy jacket with slouchy, oversized pants — and a cool-girl gaze? Check. 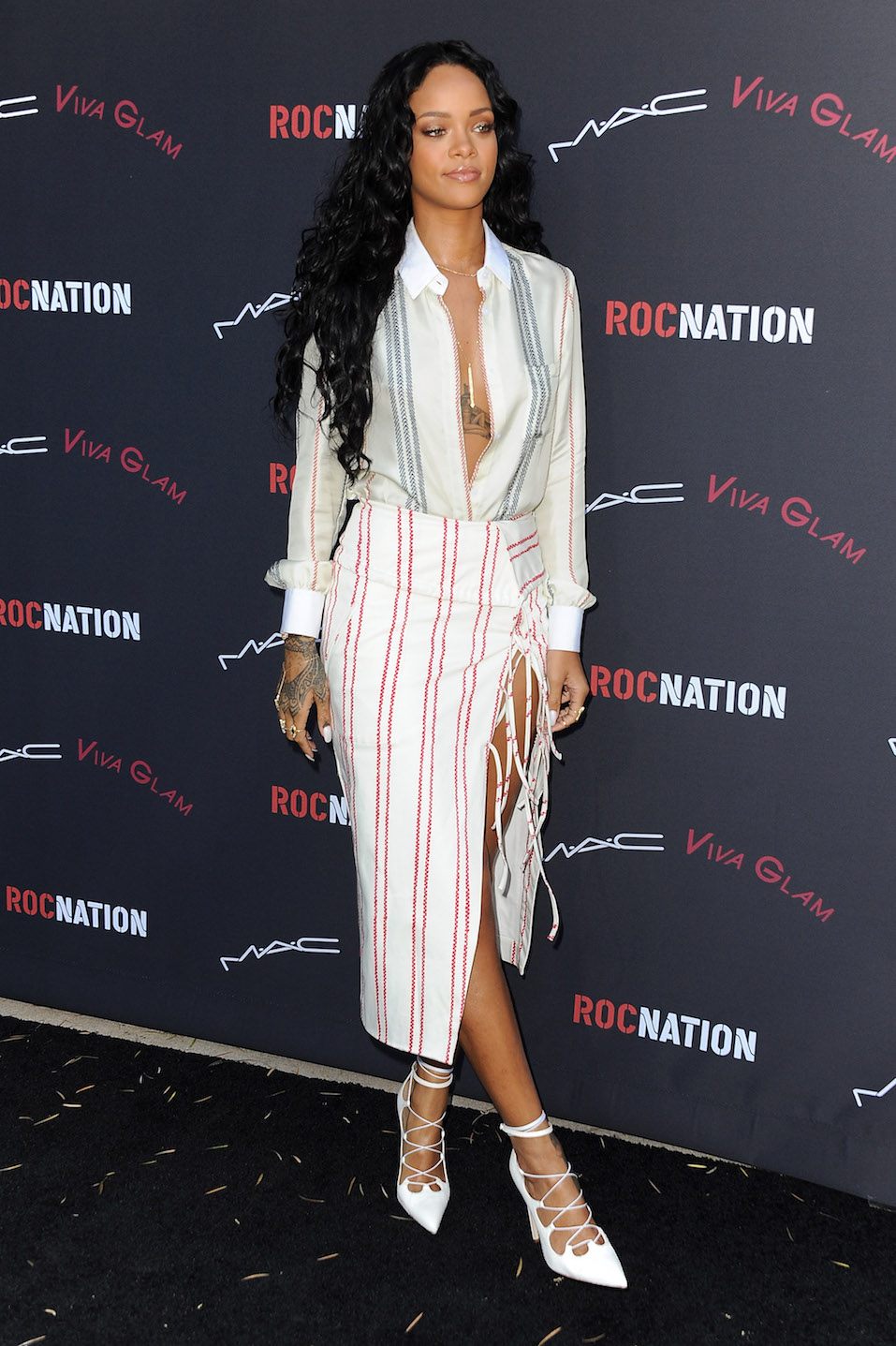 Rihanna might be the only one who can make this work. | Angela Weiss/Getty Images

Combining competing prints can be a recipe for style disaster — especially when they’re in the same family of patterns. But, that didn’t stop Rihanna from showing her stripes in a look that effortlessly combined various lines to create a chic effect.

4. Wearing pants that are too long 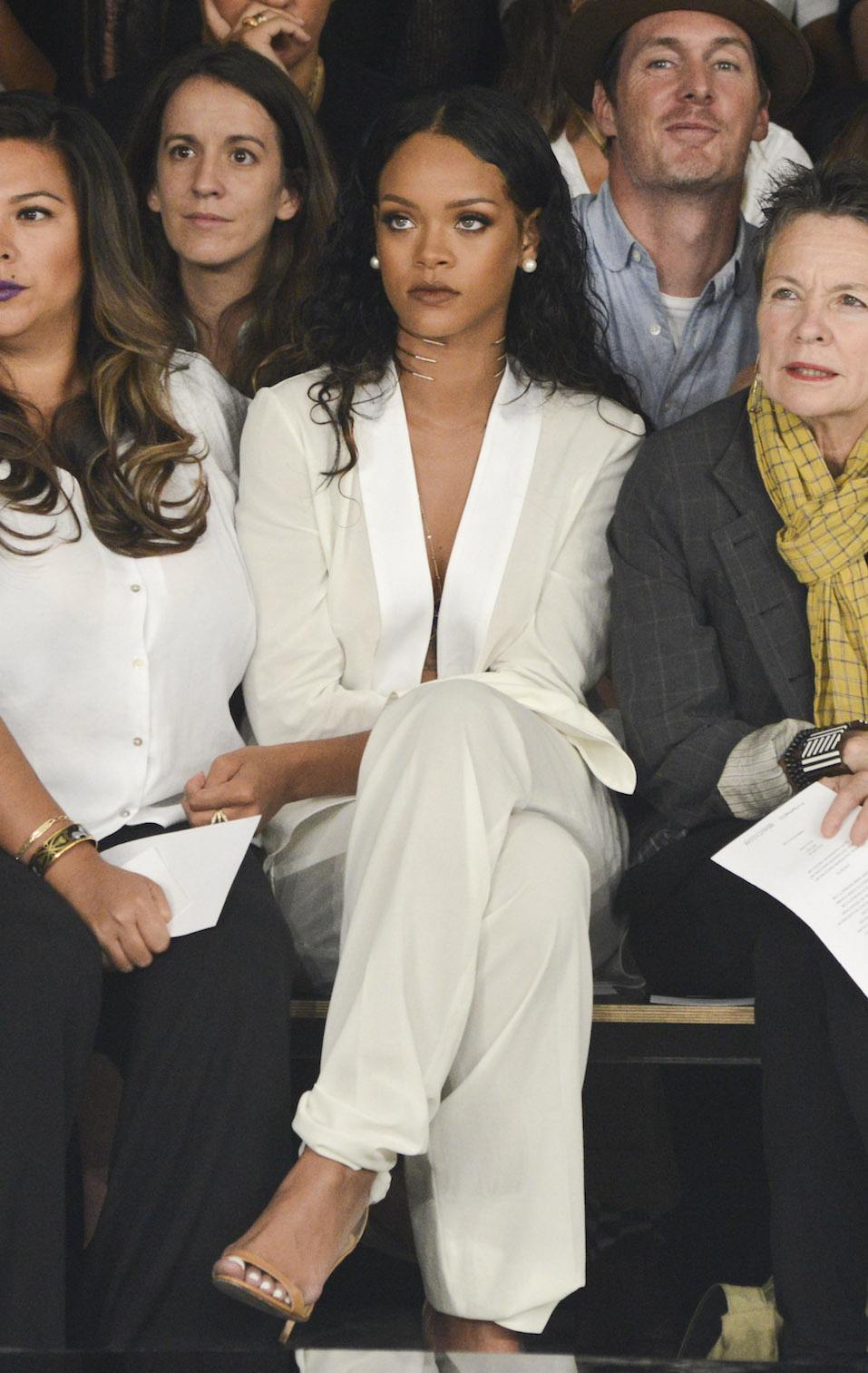 Hemming pants? Psshh. No need for a tailor when too-long trousers look as good as this winter white suit she wore while seated front row at the Edun fashion show during Mercedes-Benz Fashion Week Spring 2015 in New York City. 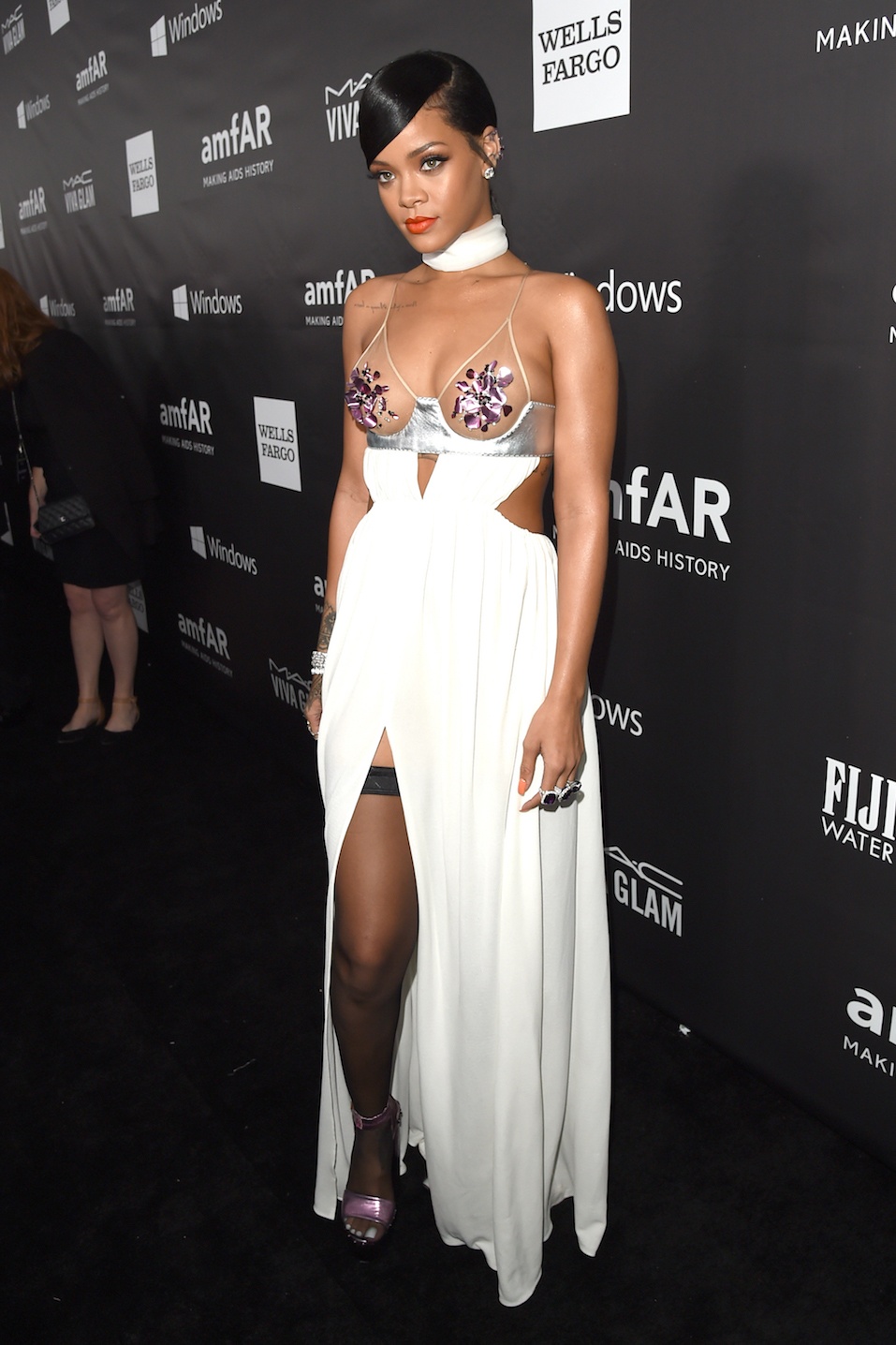 This look, debuted by Rihanna at the amfAR LA Inspiration Gala honoring Tom Ford in October 2014, may get more than a few double-takes. The risqué entrance could be said to break a number of fashion rules with its revealing bodice and visible garter tights. But, if you scroll your gaze to the very bottom of the ensemble, you’ll see RiRi also shirked any rule that says pantyhose and a pair of sandals don’t go together. Given its provocative quality, it’s no wonder she pulls it all off with such panache. 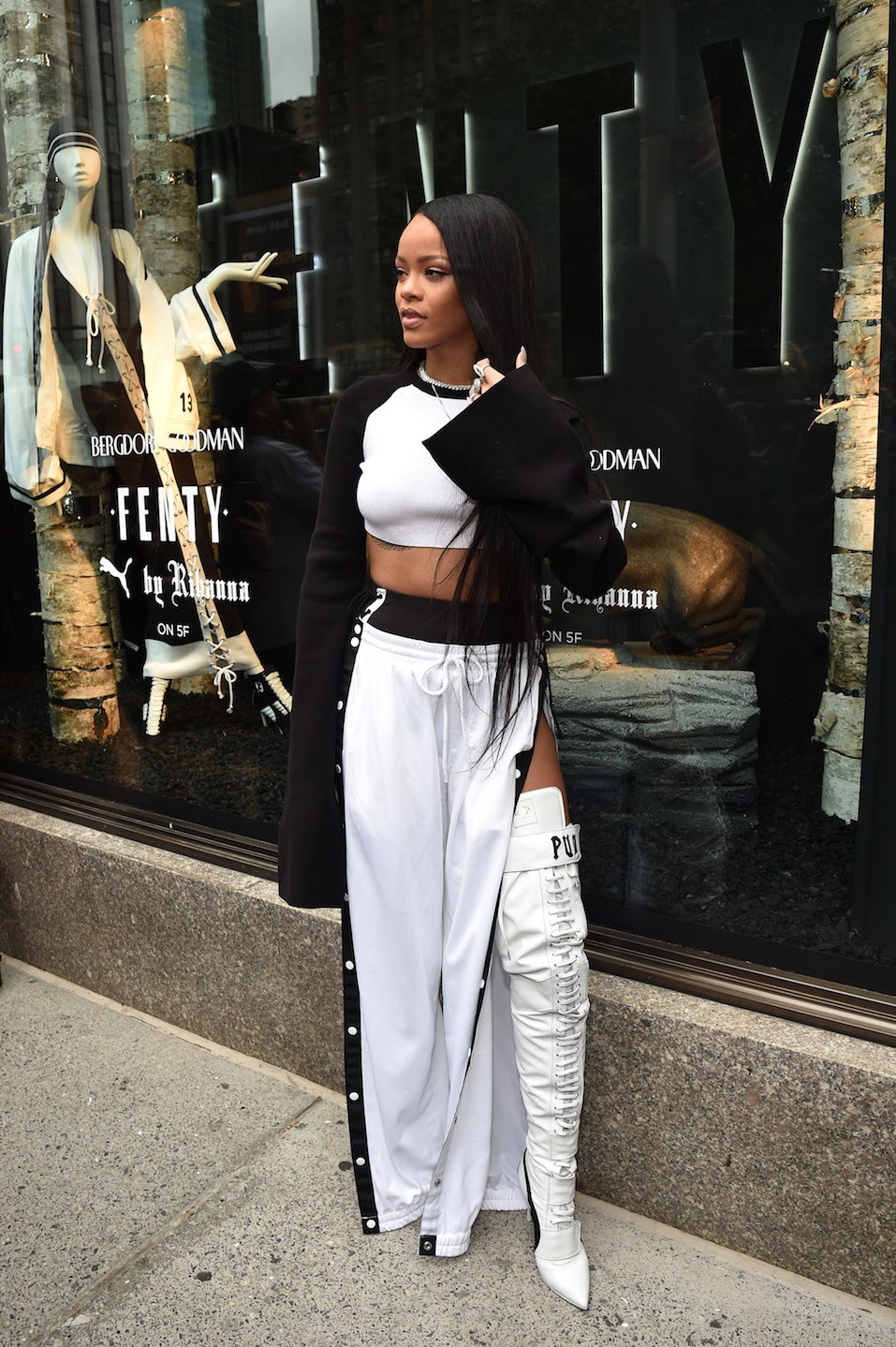 Rihanna’s look was a little weird, but it also worked. | Bryan Bedder/Getty Images

Donning a cacophony of styles that would look comical on most, Rihanna instead looked every bit the stylish fashionista at the Fenty x Puma by Rihanna launch at New York City’s Bergdorf Goodman in September 2016. Those athletic, breakaway track pants might have completely broken the fashion rules, especially when worn unsnapped and with seductive, lace-up thigh-high boots, but who cares when they looked so striking? No need for running shoes here.

7. Wearing a baseball cap (and sneakers) with a gown 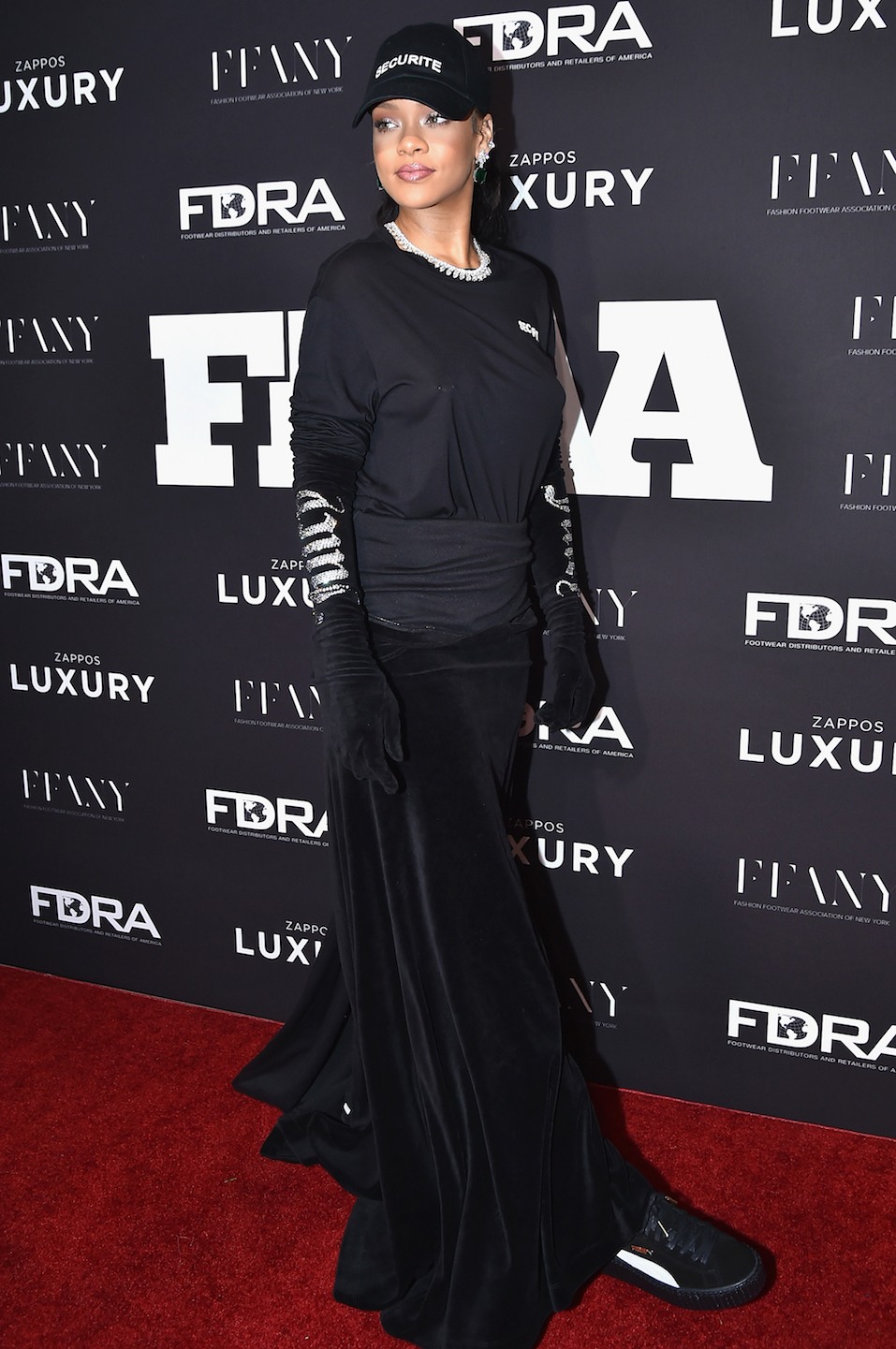 Despite the dressier mood of her gown-like ensemble, not to mention the glittery gloves and diamond-laced jewelry, Rihanna still found it fitting to throw on a baseball cap and sneakers — and look darn good, too — at the 30th FN Achievement Awards in November 2016. 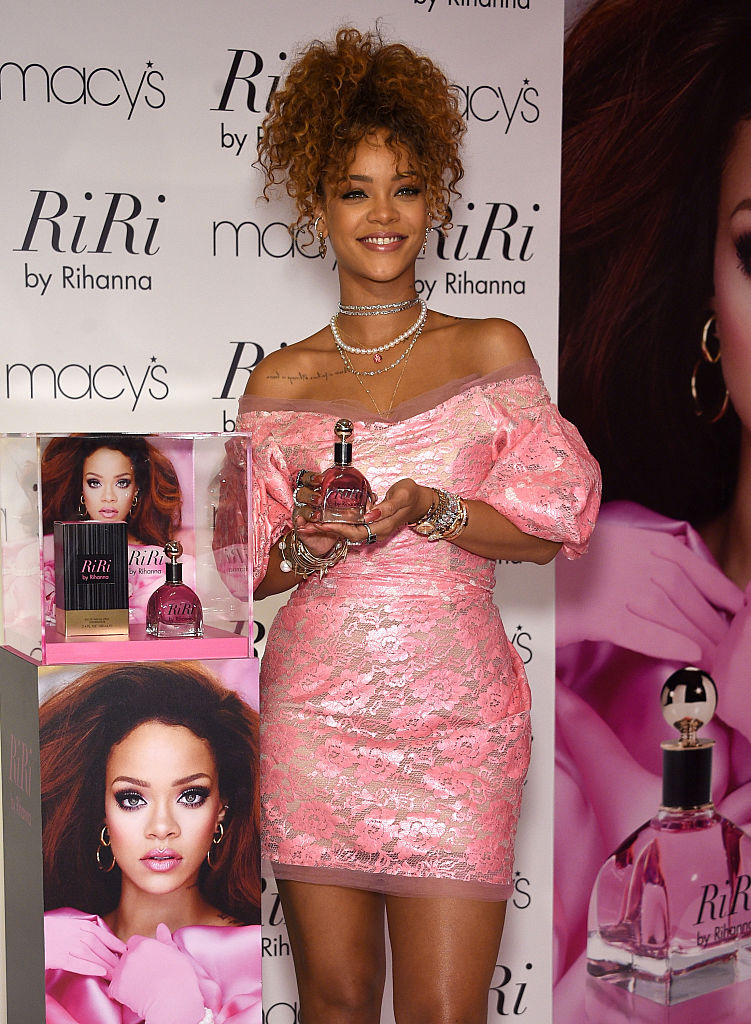 Rihanna had her own Pretty in Pink moment at the August 2015 launch of her RiRi by Rihanna fragrance. While she looks like she could be on her way to an ’80s prom party with her bubblegum-pink frock and pouf sleeves, she still works the girly (some might say dated) look to her advantage. 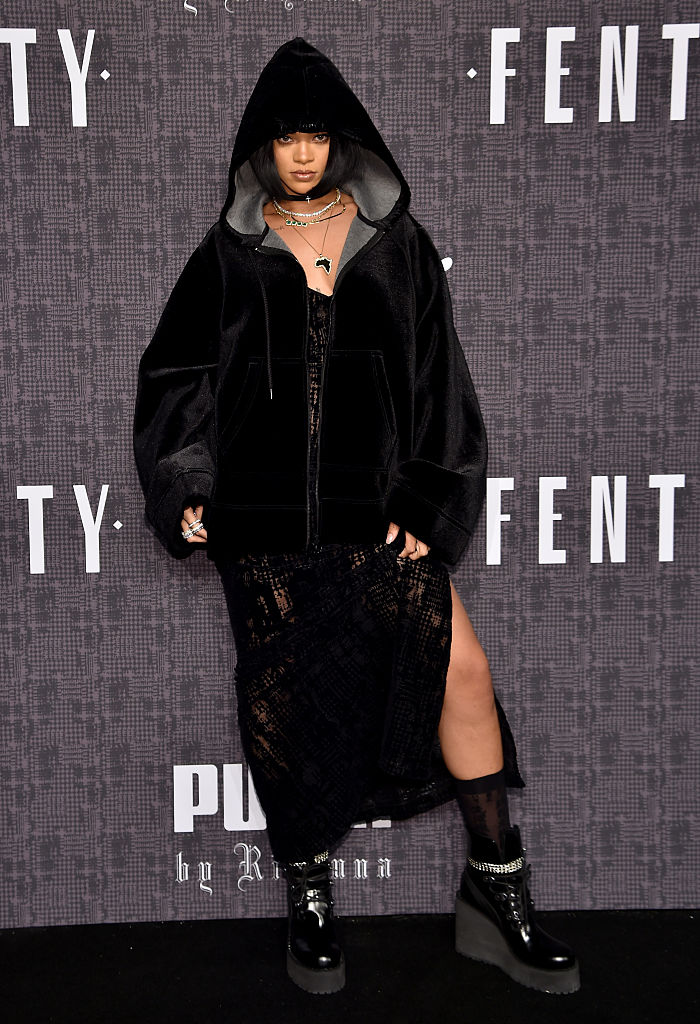 No one does drama like RiRi. | Dimitrios Kambouris/Getty Images

While at New York Fashion Week in February 2016, RiRi transformed into the ultimate goth girl with an all-black statement complete with an oversized, hooded parka and a heavy pair of platform patent boots. Of course, her darkly gothic side got a bit of a glam upgrade with the suggestion of sexy lace underneath. 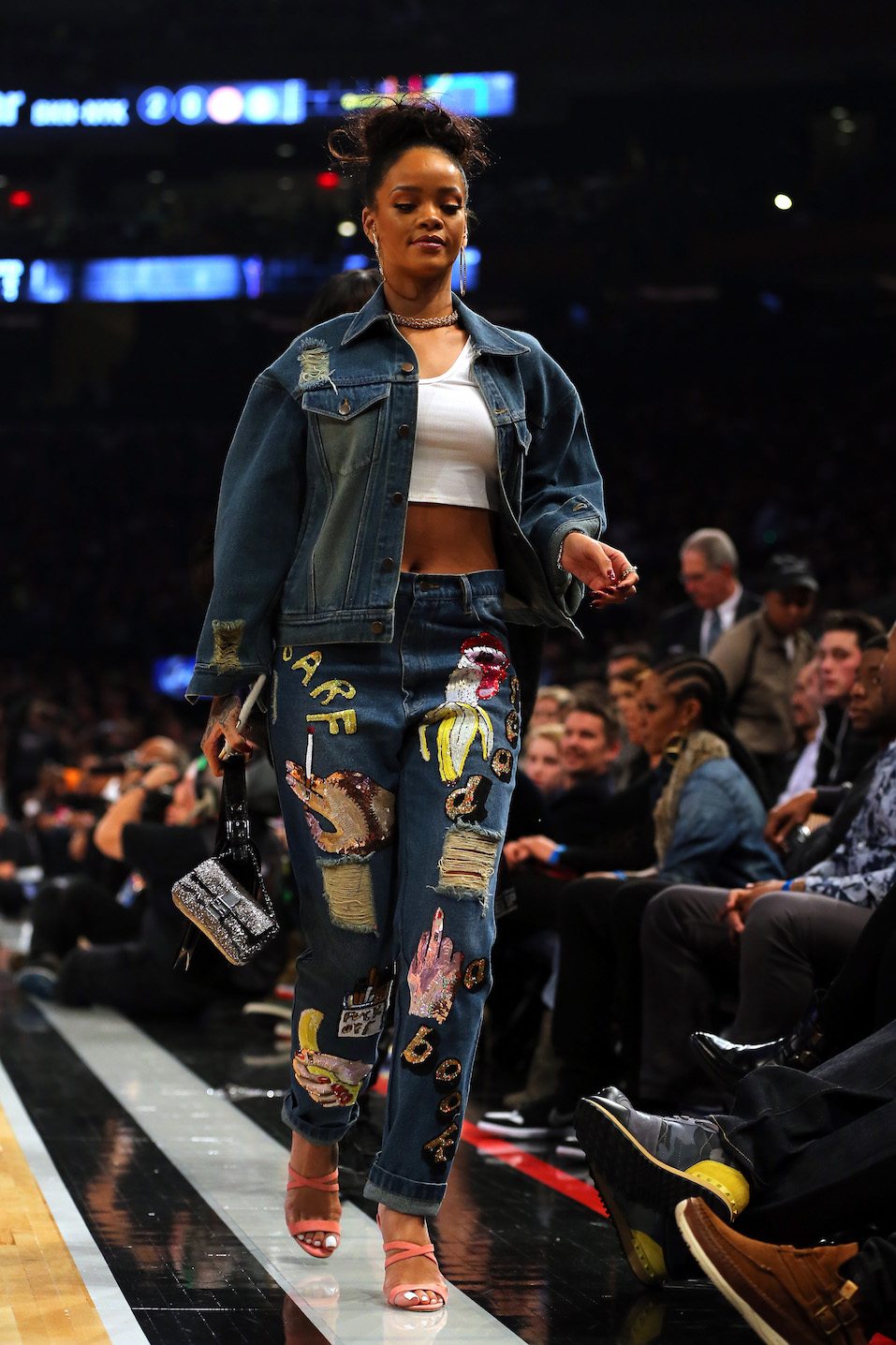 Wearing the all-denim Canadian tuxedo is one thing. Flaunting a version of the tux that’s filled with provocative patchwork takes it to whole other level. Of course, this is Rihanna and she does nothing halfway. So, bring on the jeans that made a statement heard all the way to Canada from her front-row seat at the 2015 NBA All-Star Game in New York City’s Madison Square Garden in February 2015. 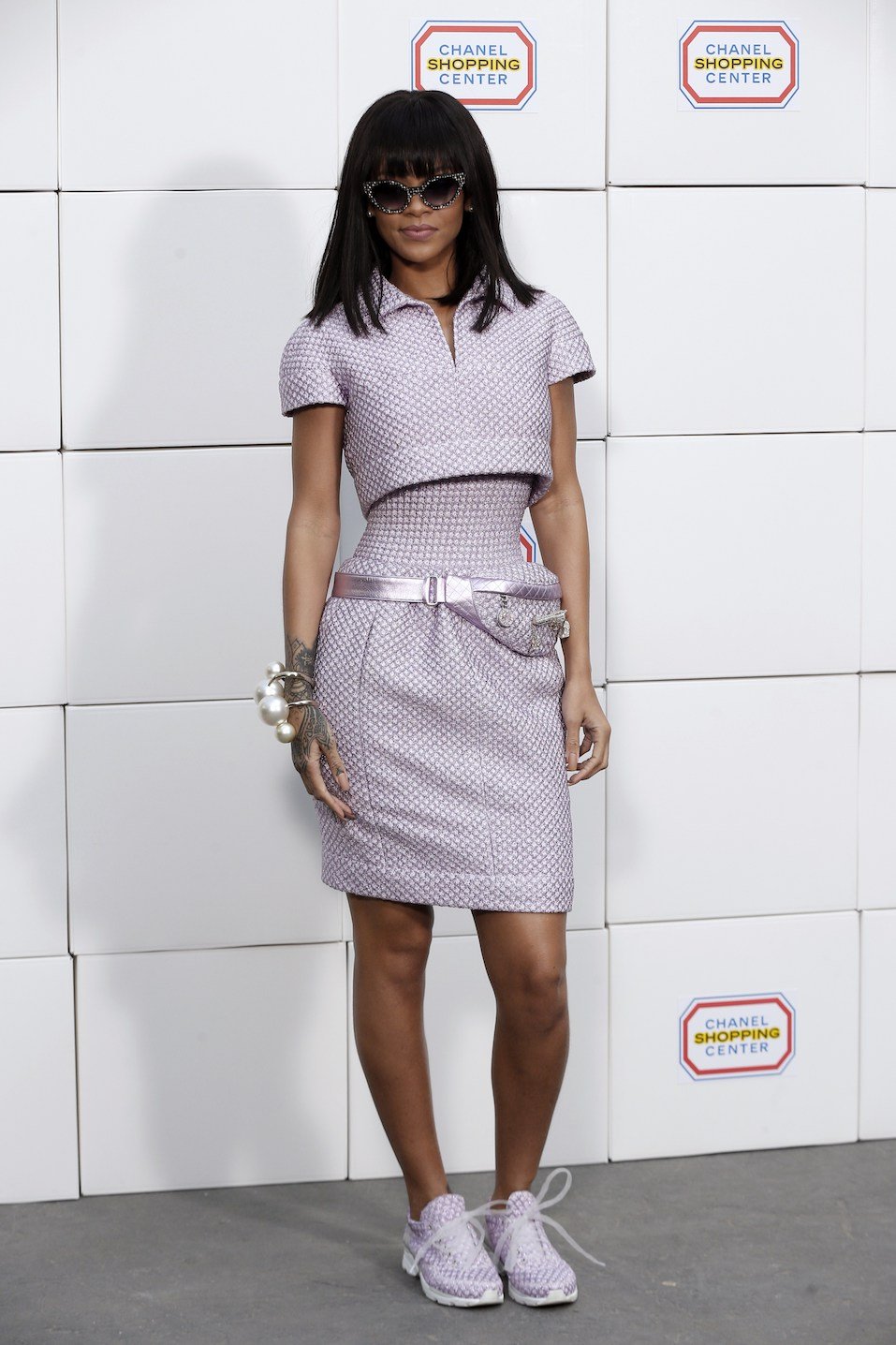 This look, which Rihanna trotted out at the Chanel fashion show held at the Grand Palais in France in March 2014, broke more than one rule. Matching your dress to your sneakers? Sure! Wearing a fanny pack — and matching it to your dress and sneakers? Absolutely! Wearing a dress with sneakers? Without a doubt! In this triple feature of ignored style guidelines, Rihanna showed off just how chic a rule-breaker can be. 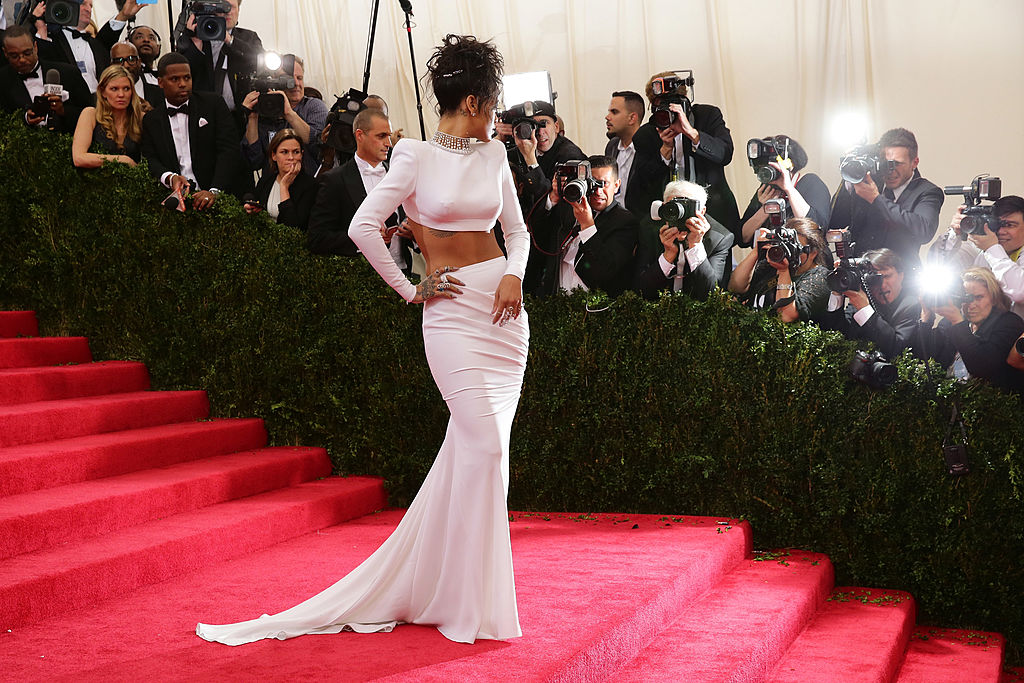 The midriff trend is one that’s quite common now on the red carpet. But it still could be considered a rule-breaking endeavor that Rihanna rocked at its finest at the Met Gala in New York City during May 2014. This glorious white gown flashed her toned tummy while still oozing with seductive sophistication.

13. Wearing a coat — and nothing else

Clearly there is nothing wrong with just wearing a coat as the main attraction — presumably with nothing underneath. And Rihanna’s look proved it at The Daily Front Row Fashion Los Angeles Awards in 2015. 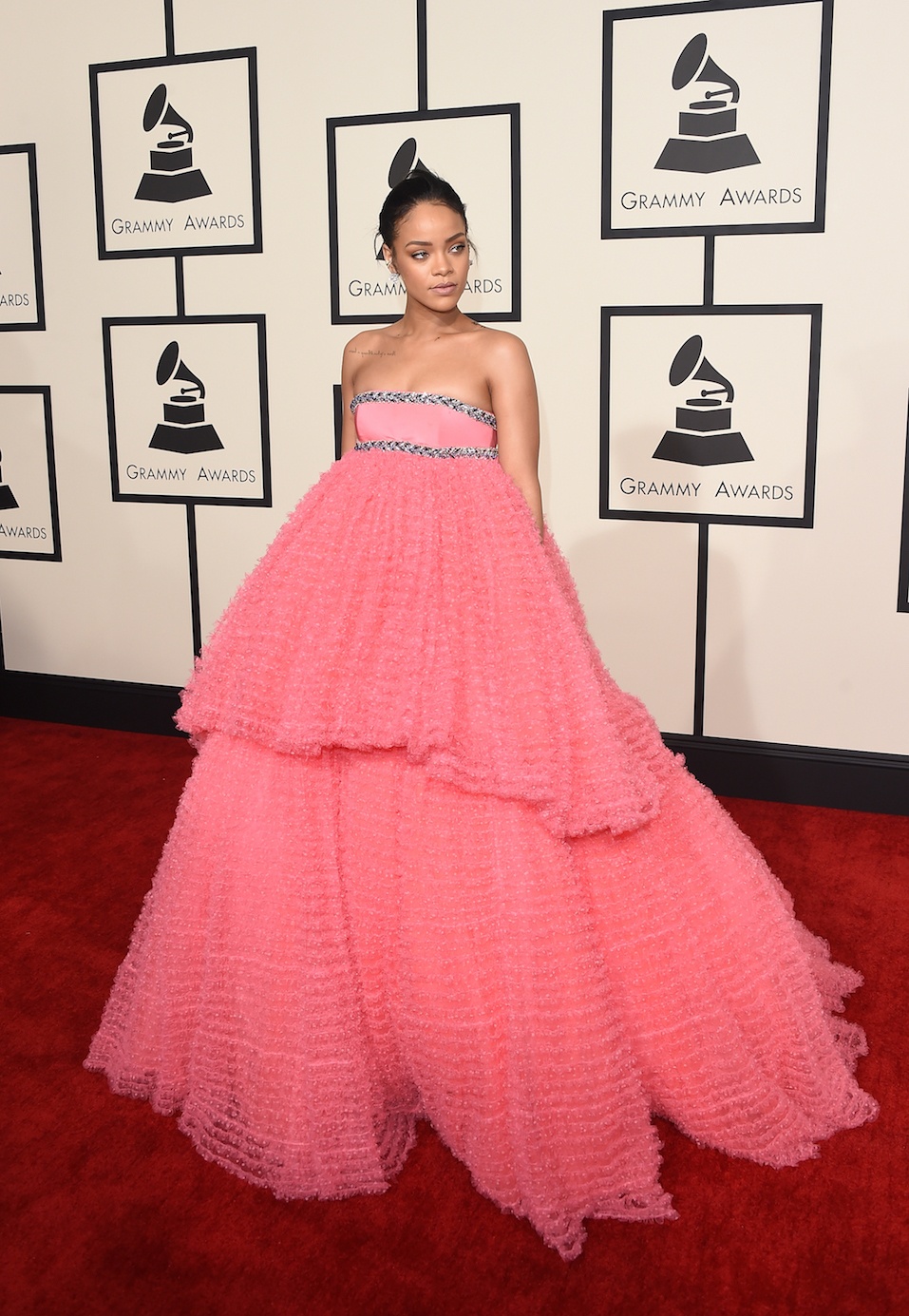 Rihanna somehow doesn’t get lost in all this fluffy fabric. | Jason Merritt/Getty Images

Nothing like ending this list on a completely frivolous note of fantasy with exactly what cotton candy would look like as a gown. RiRi floated out this creation at the 57th Annual Grammy Awards in February 2015, and it was a sugary fairy tale of voluminously epic proportions.