Whether you think smartwatches are pretty impressive or still need to get smarter, you have to concede that the battle for consumers’ wrists has gotten intense. In 2015, Apple and Fitbit launched new smartwatches and fitness trackers with so much fanfare that it would have been easy to overlook options from Microsoft, Pebble, Basis, and other companies making innovative wearable devices. But ignoring all of those Apple Watch alternatives that would be a mistake. Android Wear and Pebble smartwatches had the luxury of being the first on store shelves and on users’ wrists. That means that several years of data and reviews enable consumers to confidently research the best smartwatches from these companies.

Ranked as the top smartwatches by SpecOut, these five options are less expensive than the Apple Watch and are already proven to be worth your money. SpecOut’s “smart ratings” take into account factors like the notifications, compatible mobile operating systems, smartphone remote features of each smartwatch, plus each device’s technical specifications, particularly its battery life and screen resolution. Each of these options offers you both smartwatch features, like notifications on your messages and calls, and activity tracking features, like the ability to track your workouts and sleep. 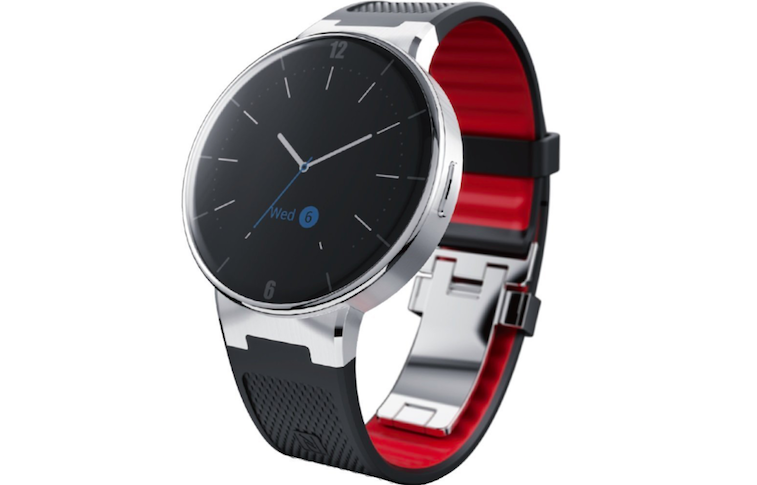 The Acatel OneTouch Watch is a surprisingly budget-friendly smartwatch when you consider all of the tech that Alcatel packed into such a small package. The watch features a wide array of sensors, including an accelerometer, altimeter, ambient light sensor, compass, gyrometer, and heart rate monitor.  It’s also equipped with an LCD touchscreen, and enables you to use a variety of apps for tracking your health, monitoring alerts, and controlling the music and camera on your iPhone or Android smartphone. It also integrates both Bluetooth connectivity and an NFC chip.

The watch offers notifications for just about everything could imagine, including apps, alarms, calendar reminders, emails, Facebook, Google Voice, incoming calls, missed calls, text messages, Twitter, and weather updates. The device can notify you either onscreen or with a vibration.

The device’s 210mAh battery lasts for about two days between charges, which is shorter than a few other options, particularly those with e-paper displays, but still more mileage than you’d get even from a pricier alternative like the Apple Watch. The apps on the device offer a wide variety of functions, which (almost) makes up for the lack of an app store to add new features to the watch.

The Pebble Time and the Pebble Time Steel are both highly-rated devices in the Pebble lineup. Both have color screens, unlike previous Pebble smartwatches. From that screen, you can stay up to date on notifications about your calendar events, texts, emails, incoming calls, and more. You can use the built-in microphone to create notes or dictate quick replies, and use the Pebble Health app to track your activity and your sleep.

The Pebble Time makes great use of Pebble’s timeline interface, which makes it easy to see the appointments and events you’ve finished, check on what’s going on now, and look ahead to the future. The device features a vibrating motor for discreet alarms that won’t wake your partner, and it gets battery life of up to seven days. Additionally, it features a steel bezel and a 2.5D glass display.

The Pebble Time Steel boasts battery life of up to 10 days, but it has a bright, always-on, color e-paper that doesn’t keep you waiting. The device is constructed of marine-grade stainless steel through the chassis and bezel, and uses a tough 2.5D glass display. Additionally, it’s water-resistant up to 30 meters. It ships with an Italian leather band equipped with quick-release pins, which makes it easy to swap with the stainless steel band that Pebble sells separately.

On both watches, you can choose among thousands of custom watch faces in the Pebble app store, and you can download favorite apps like Uber, Pandora, and hundreds more. The voice reply functionality on both watches works with AT&T iPhone accounts, and on many Android apps including SMS, Hangouts, Gmail, Facebook Messenger, WhatsApp, and more.

You could think of the original Pebble as the watch that started it all. Well, that might be a bit disingenuous to say — consumers and sci-fi entertainers have been dreaming of this technology for decades, and Pebble just so happened to beat many other manufacturers to the punch.

The watch made headlines in 2012 when the company started a Kickstarter campaign to raise funds for production. Pebble was able to raise $10.3 million through crowdfunding, well over its $100,000 goal. The success continued for Pebble; according to Forbes, more than 400,000 Pebble watches were sold between January 2013 and March 2014. That success helped fund the next in the line of the Pebble brand: the Steel.

The Pebble watch features an always-on e-paper display, which helps boost the estimated battery life to seven days. Its screen measures 1.26 inches diagonally and has a 144-by-168 resolution. It pairs with Android and iOS devices over Bluetooth to send notifications, alerts, reminders, and alarms. The Pebble can even control music selection while on the go. You can select a red, black, pink, or white version here.

The Garmin Vivoactive is a great choice if you want a smartwatch with a high-resolution color touchscreen that you won’t struggle to read in the sunlight. The device is unique, especially at this price point, in that it’s GPS-enabled. That means that you can track your running, biking, golfing, swimming, or other activities and view your stats, even when you’re away from your smartphone. When you purchase the Vivoactive, you can choose one either with or without a heart rate monitor.

The watch pairs with an iPhone or an Android phone and can either vibrate or display alerts to let you know about incoming calls, texts, email, calendar items, and notifications from social media and other apps. You can also download watch faces, widgets, data fields, and apps from Garmin’s Connect IQ store.

The watch is particularly great for runners, and you can set up vibration alerts for your heart rate, pace, and run/ walk intervals, and use training features including Auto Lap and Auto Pause. There are similarly smart features for swimmers, golfers, cyclists, and those who aren’t engaged in a specific activity, but are trying to stay fit.  The battery can last up to three weeks in activity/tracking mode and 10 hours when you have GPS turned on. According to SpecOut, the average battery life should be right around seven days.

At first glance, the Pebble Steel is indistinguishable from an everyday wristwatch. Its metal casing and the choice of leather or metal bands add to its elegance.

The Steel is the successor to the Kickstarter darling Pebble smartwatch that made headlines and broke records. With this iteration, the company made some upgrades, creating proper Android and iOS capabilities to update the watch’s software with new faces and provide the ability to download applications from FourSquare and ESPN. However, the purpose of the Pebble Steel is to act as an extension of your phone.

The Steel uses Bluetooth to push a number of notifications from various apps, as well as standbys like email, phone, and text message alerts. It’s also able to control the music playing on your smartphone, which is handy when you’re out running.

Its 130 mAh Lithium-ion battery has an estimated running time of seven days depending on usage, better than what you’ll see on most other smartwatches. The Steel achieves this by utilizing a black and white e-paper display rather than a more power-hungry LCD or OLED display. Its screen is 1.26-inches and has a 144-by-168 resolution. Order one here.