5 Ways to Add Patterns to Your Wardrobe This Fall

The heat of the summer is finally giving way to cooler evenings and chilly mornings. As the weather changes, you’re probably giving some thought to how you’d like your wardrobe to transition to fall. The season brings opportunities to get reacquainted with layering, rediscover your favorite cold-weather clothes, and even step up your style with some experimentation with colors and patterns you haven’t worn before.

If you’re like many guys, you probably wear a lot more solids than patterns. But a judiciously-chosen jacket, sweater, or shirt designed with a classic pattern is an excellent way to upgrade your closet. Read on for five classic ways to incorporate pattern into your wardrobe this autumn, in ways that pay tribute to many different traditions in the menswear world and honor the many different influences that have informed American menswear and workwear throughout the decades. 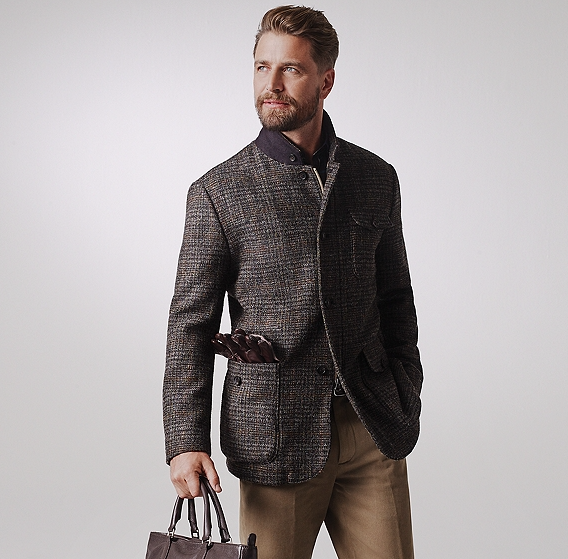 When it comes to fall and winter style in the United Kingdom and outlying isles, warmer is better. So one of the hallmarks of English style — and particularly of the clothing meant to be worn in the field, in the country, or anywhere a resistance to wind and water is prized — is an emphasis on Harris Tweed, textured wool, and the array of different patterns into which these materials are woven.

Tweed originally emerged as a hand-woven fabric in Scotland and Ireland. In the first half of the 19th century, English noblemen followed Prince Albert’s lead in purchasing Scottish estates, and then in commissioning custom estate tweeds which identified people who lived and worked on the estate (versus clan tartans, which identified members of families regardless of where they lived). Tweed became the ideal outdoor cloth, and was worn while hunting, shooting, fishing, golfing, cycling, motoring, and more.

You can honor those years of heritage, and get some pattern into your cold-weather wardrobe by wearing a piece of outerwear made of tweed. You can find tweed jackets and coats, both new and second-hand, in a number of different patterns — herringbone, overcheck herringbone, barleycorn, houndstooth, checks, tartan, plaid, windowpane plaid, etc. — and in cuts ranging from a sport coat to a Norfolk jacket to a classic field coat.

2. Go for the Ivy League look with bright ties 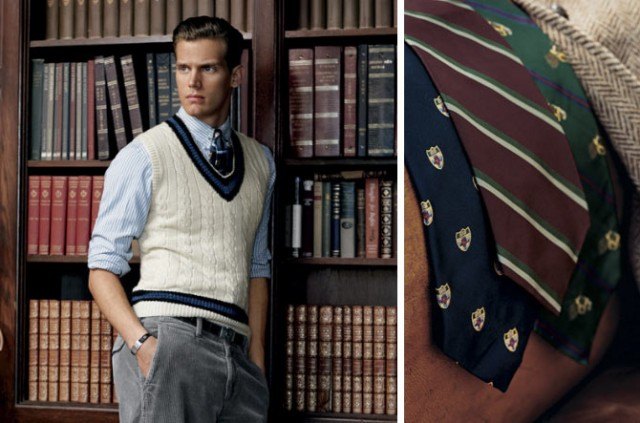 One of the major archetypes of American style was developed on the campuses of the country’s most elite universities. Over three or four decades, clothiers and their young customers together developed the Ivy League look, which consisted as much of oxford cloth shirts, cuffed trousers, Shetland sweaters, and repp ties as the nonchalant styling that young East Coast intellectuals gradually developed as they codified the way the clothes would be worn on campus.

A staple of Ivy League style, and a favorite among its modern devotees, is the repp tie, a bright tie that originated in the 1800’s, when it was popularized by English schools that used contrasting stripes to denote where students were from and which clubs they were members of. By the 1920’s, the style was adopted by the Ivy League schools. Brooks Brothers created the modern version of the repp tie by reversing the direction of the stripes on English regimental and club ties.

While many guys associate the term “repp tie” with the diagonal stripes, they actually aren’t the hallmark of the style. That honor goes to the tightly woven, ribbed silk of which the ties are made. You can opt for a repp tie in many different styles of stripes, go with a dotted version, one decorated with crests, or even opt for a bowtie instead of a straight tie. 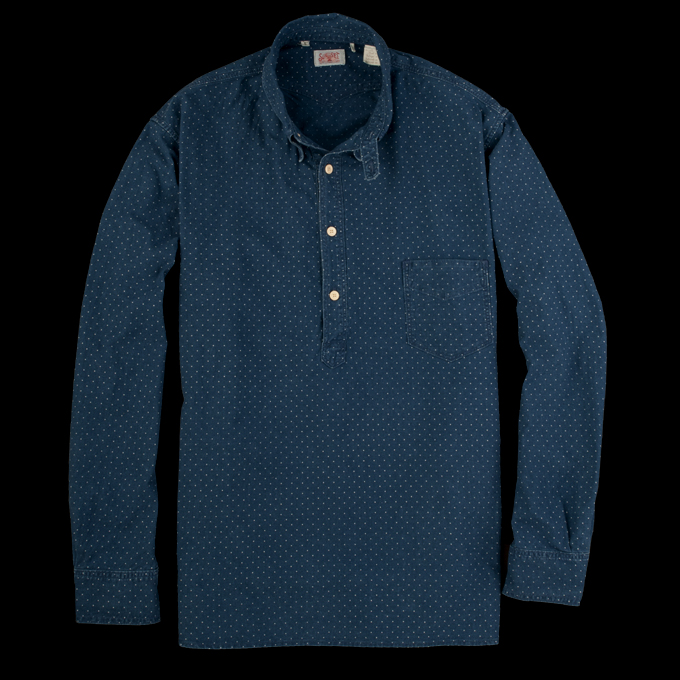 A patterned shirt is a simple way to add interest | Source: Unionmadegoods.com

Just like the style codified by East Coast university students, the mode of dressing developed by miners, ranchers, farmers, and soldiers remains popular in menswear circles. And luckily for guys looking to incorporate more pattern into their fall wardrobes, a trademark of classic American workwear has been patterned shirts, ranging from Pendleton’s plaids to the small discharge prints of classic work shirts to the hickory stripe of a shirt jacket.

Sturdy workshirts in small dot and floral prints, especially on indigo-dyed fabrics, were made possible by the early nineteenth century development of discharge printing, which creates white patterns on a colored fabric by applying a bleach paste to the pre-dyed fabric. Other fabrics were made with steel-engraving printing methods. Buffalo plaid was introduced a bit later, when Woolrich Woolen Mills created the first buffalo check shirt for workers and outdoorsmen in 1850. And hickory stripe, a sturdy cotton twill, seems to have originated in the mid-nineenth century but grew in popularity through the 1920’s and 1950’s, when the fabric found favor among carpenters and railroad workers.

You can find workshirts, chore coats, and work jackets in all of these patterns today. Many guys wear them proudly, taking cues not only from their grandfathers and great-grandfathers, but from generations of hard-working men who needed clothes that put function above form — and just happened to incorporate some great patterns in the process.

4. Take a cue from the French with a marinière 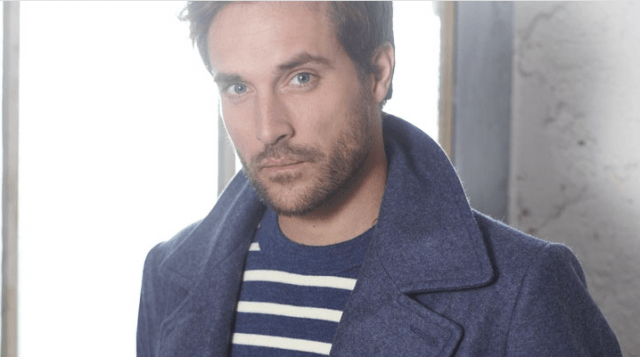 Stripes are great for those new to wearing patterns | Source: Armorlux.com

The archetype of effortless French style and the je ne sais quoi of Gallic style icons is no secret among the style-conscious. Take a cue from the French mode of dressing that so much of the world envies with a pared-down, sophisticated take on pattern best embodied by the marinière or Breton-striped top.

The shirt traces its origins back to 1858, when it was adopted as the uniform of the French Navy in Brittany. A few decades later, in 1889, Tricots Saint James began producing the navy-and-white striped shirt in wool and cotton, and it was soon taken up by workers of all trades. (Saint James has made the shirts ever since, and you can still purchase them from the manufacturer today.) Iconic wearers of the marinière include Pablo Picasso and Andy Warhol, James Dean and Jean-Paul Gaultier, and the style is as popular now as it ever was.

You can still find the striped tops, in either contemporary versions or in styles that are virtually unchanged since the shirt’s origin. Saint James, Armor Lux, and Petit Bateau are excellent places to start your search for the perfect striped shirt, and Westerlind and Unionmade always have an excellent selection. They pair well with chunky sweaters or dark wool outerwear, such as the navy peacoat, another French classic. 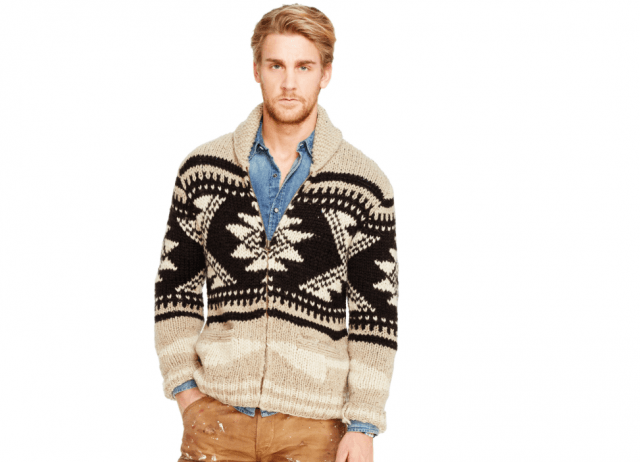 Another favorite class of patterns for menswear devotees are blanket patterns evocative of the American Southwest, ones that pay tribute to the traditional patterns created by the tribes of Native Americans in the region, like the Navajo, Zuni, and Hopi. Such patterns, especially in heavy sweaters and even wool coats, are ubiquitous in the fall and winter months, but it’s particularly important to pay attention to the cultural context of the designs you’re wearing.

We’d advise against donning a sweater or a coat that uses a historic, traditional pattern that holds cultural significance for members of the tribe that created it. A better alternative, one which enables you to nod to the Southwestern aesthetic without offending anyone, is to choose a piece that reinterprets geographic patterns and desert colors in a simplified form (and without marketing that wrongly lays claim to native heritage).