What’s Changed Since the Original iPhone?

Apple just unveiled its latest iPhone 6s and iPhone 6s Plus at a much-anticipated event in San Francisco. You’ve probably read all about the new iPhones and what they can do, and if you own an iPhone now or did in the past, you’re likely familiar with what it looked like. But what came before the past few iPhones? And how has what Apple chief executive Tim Cook referred to as the world’s most-loved iPhone evolved in the almost-decade of its existence? Read on for an overview of each generation of the iPhone to see how it’s changed through the years. 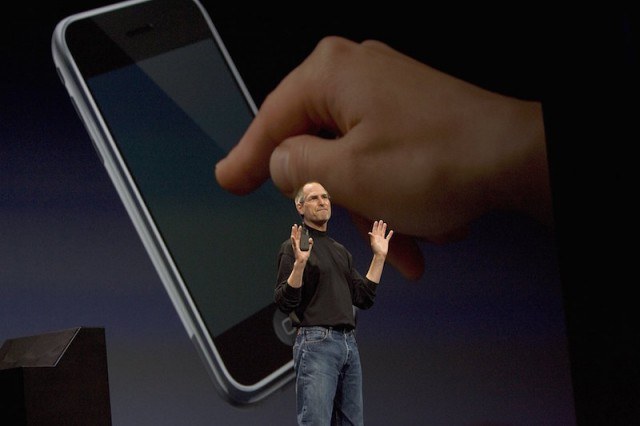 Apple’s first-ever iPhone was unveiled by late chief executive Steve Jobs on January 9, 2007, at Macworld in San Francisco. On June 29, the first iPhone ever went on sale. The original iPhone featured a 3.5-inch display, a quad-band GSM radio, 802.11b/g WiFi, and support for Bluetooth 2.0.

While announcing the first iPhone, Apple chief executive Steve Jobs prank-called a nearby San Francisco Starbucks and ordered 4,000 lattes to go, a prank that Apple fans repeated countless times over the years, according to CIO. As Time reports, the first iPhone was sold on a first come, first served basis, and was limited to two per customer. On September 10, only 74 days after the iPhone launched, Apple announced that it had sold more than 1 million iPhones. 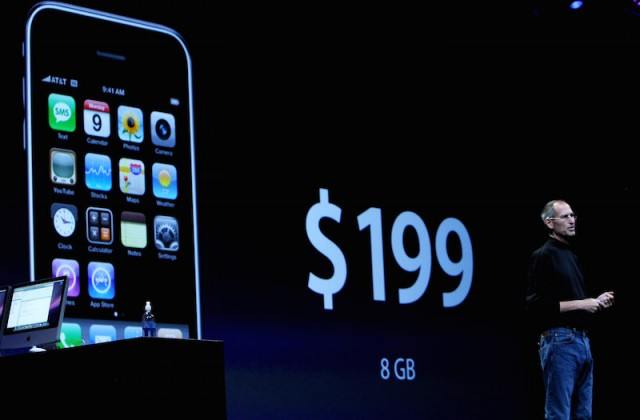 On June 9, 2008, Apple introduced the iPhone 3G, which had networking capabilities twice as fast as those of its predecessor, quad-band GSM and tri-band HSDPA 3G radios, and a 2MP camera. On July 11, Apple unveiled the App Store. At the time, it had 500 native apps ready for users to download. The company also released iOS 2.0. By July 14, Apple had sold 1 million iPhone 3G units, and App Store downloads had topped 10 million. On September 9, less than two months after the App Store’s initial debut, downloads topped 100 million worldwide and more than 3,000 apps were available.

The second-generation iPhone 3G was released to many more countries than the original iPhone, which had been released only in North America and in the European Union. Early the next year, on March 17, 2009, Apple announced the iPhone OS 3.0 Beta. The operating system update brought more than 100 new features, including cut and paste, parental controls, and support for stereo Bluetooth. On April 24, App Store downloads surpassed 1 billion. 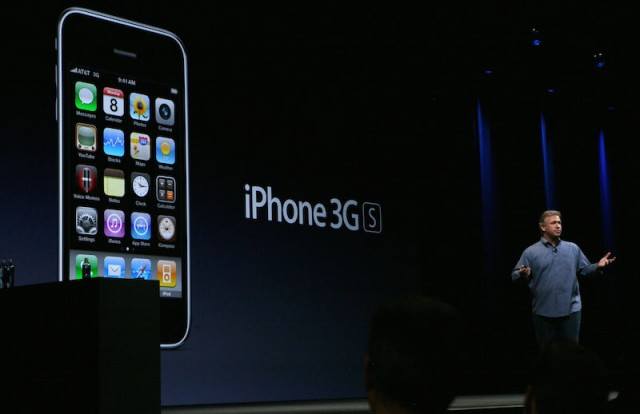 On June 9, 2009, Apple unveiled the iPhone 3GS, which featured upgrades to the device’s battery life, network speed, and camera quality. It boasted a new 3MP camera with video recording capability, a new 32GB storage option, new voice control features, a compass, Internet tethering, and integration with Nike+. As Stephen Kleckner reports for VentureBeat, the iPhone 3GS’s processor was upgraded from a Samsung 32-bit RISC ARM running at 412mhz to a 600mhz ARM Cortex-A8 Samsung S5PC100. That new processor was capable of 833mhz if overclocked, and the GPU was upgraded from a PowerVR MBX Lite 3D to a Power VR SGX535, offering an almost 30% increase in speed. However, the phone wasn’t without its issues, and was notorious for heating up if it wasn’t given proper ventilation.

With the new iPhone 3GS came iOS 3.0, which brought the first iOS keyboard in landscape orientation. The company sold 1 million units during the iPhone 3GS’s first weekend on the market. By the end of September, the App Store had topped 2 billion downloads, had 125,000 developers, and boasted 85,000 apps available for download. By November, there were more than 100,000 apps available, and customers in 77 different countries could discover apps via 20 app categories. By January 5 2010, App Store downloads surpassed 3 billion. By April, there were more than 85 million iOS users and over 4 billion app downloads. 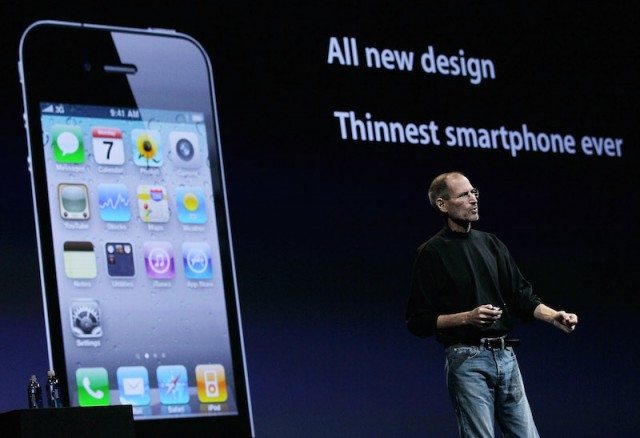 On June 7, 2010, Apple introduced the iPhone 4. The new device brought FaceTime and a 3.5-inch high-resolution Retina display — a first for Apple — as well as iOS 4. It also featured a new front-facing camera for FaceTime calls, a 5MP rear-facing camera, and the Apple A4 processor. Apple sold 1.7 million within the first three days of the phone’s availability.

On February 10, 2011, Verizon began stocking the iPhone, ending AT&T’s four years as the iPhone’s exclusive carrier. By July 7, 2011, exactly a year after the iPhone 4 was unveiled, Apple announced that App Store downloads had topped 15 billion and that there were more than 200 million iOS users worldwide. 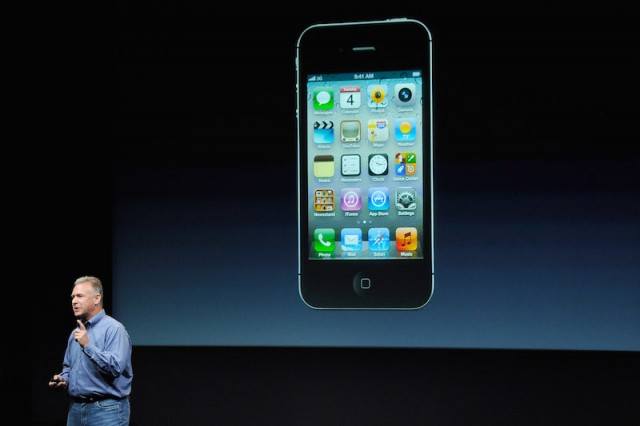 On October 4, 2011, Apple launched the iPhone 4s, which added more than 200 new features, including major upgrades like the iOS 5-enabled Notification Center, iCloud, and Siri. Siri became the defining innovation ushered in with the phone, despite performance issues.

The phone also added the dual-core A5 processor, an 8MP camera with 1080p video recording, and world phone features with GSM, HSPA, and CDMA radios. The CPU and internal memory of the phone were upgraded significantly, and the 8MP camera put the iPhone 4’s 5MP camera to shame. Steve Jobs passed away the day after the iPhone 4s was revealed, on October 5, making the iPhone 4s the last Apple product to be launched under Jobs’ watch.

iPhone 4s preorders exceeded 1 million in the first 24 hours. Apple released iOS 5 two days before the official release of the iPhone 4s. With 4 million units sold in the first weekend, the iPhone 4s was by far and away the fastest-selling iPhone ever. On January 13, 2012, the iPhone 4s arrived in China and in 21 other countries. By March 5, App Store downloads had surpassed 25 billion. In the second quarter of 2012 alone, Apple sold more than 35 million iPhones. On June 11, Apple announced iOS 6 at WWDC. 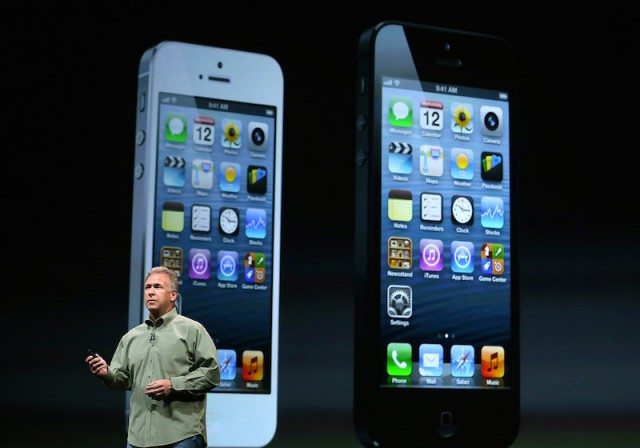 Apple unveiled the iPhone 5 on September 21, 2012, and soon released iOS 6. The new phone brought a 4-inch Retina display, 4G LTE support, an 8MP camera, the Apple A6 processor, and the proprietary Lightning port. The phone was the first iPhone with a display larger than 3.5 inches, and Apple sold 5 million units of the iPhone 5 in the three days following its launch.

By April 2013, all major U.S. carriers were selling the iPhone. On June 10, 2013, at its annual Worldwide Developers Conference, Apple unveiled the completely-revamped iOS 7, which brought visual upgrades, the Control Center, and multitasking features to the iPhone. 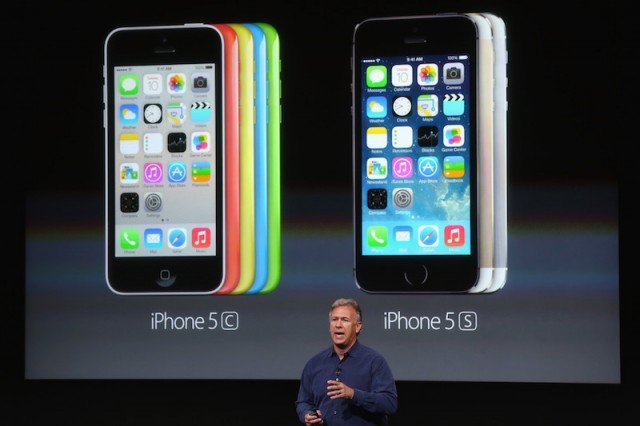 On September 10, 2013, Apple launched the iPhone 5s and the iPhone 5c. The new phones featured the A7 processor, support for a wide assortment of 4G LTE bands, plus the TouchID fingerprint sensor, which made headlines as the western world became concerned about privacy. The iPhone 5s was one of Apple’s first 64-bit mobile devices.

By September 23, after the new models had been on sale for only three days, Apple had sold a record-breaking 9 million iPhone 5s and iPhone 5c units. In January 2014, the new models were brought onto China Mobile’s 4G and 3G networks. On June 2, Apple announced the beta of iOS 8, which added new photo organization features and the ability to send voice clips via iMessage.

iPhone 6 and iPhone 6 Plus 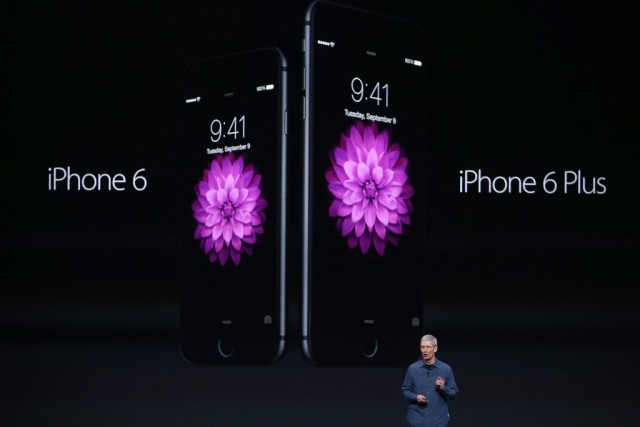 The iPhone 6 and iPhone 6 Plus also propelled Apple to a record-breaking quarter. The company sold 74.5 million iPhones from October to December and generated $18 billion in quarterly profit — the most ever for a corporation. In April 2015, the Apple Watch went on sale as a companion to the iPhone, and in June, Apple unveiled Apple Music and announced iOS 9 and watchOS 2.

Exactly a year after it unveiled the iPhone 6 and iPhone 6 Plus, on September 9, 2015, Apple unveiled the new iPhone 6s and iPhone 6s Plus. The two new phones added 3D Touch, a 12MP iSight camera and 5MP FaceTime camera, a new custom aluminum alloy and cover glass material, plus an upgraded A9 processor and M9 motion coprocessor.