When Will You Actually Get to Upgrade to Windows 10? 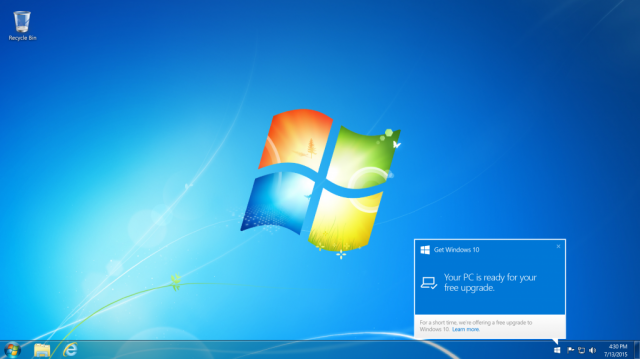 Microsoft’s Terry Myerson wrote on the Windows blog that the company is planning to roll out Windows 10 “in phases to help manage the demand.” The idea seems to be both to ensure that Windows 10 is both well-received by users and to make sure that it’s running smoothly on the wide array of devices where it will be used. Myerson says that in testing on “millions” of systems, Windows 10 has shown full compatibility with the “vast majority” of Windows 8 and Windows 7 systems. Manufacturers will soon be able to put Windows 10 on new machines, and retailers will receive a build that will enable them to update eligible devices that shipped with Windows 8.1.

Based on Myerson’s blog post, it sounds like Windows Insiders, who are already testing Windows 10, will be the first to receive the ability to upgrade to the new operating system. After Windows Insiders, the millions of users who have reserved the upgrade will receive Windows 10 next. As Microsoft has explained before, Windows 10 will download to a user’s computer before they’re presented with the option to update.

“We will start notifying reserved systems in waves,” Myerson writes, “slowly scaling up after July 29th. Each day of the roll-out, we will listen, learn and update the experience for all Windows 10 users. If you reserved your copy of Windows 10, we will notify you once our compatibility work confirms you will have a great experience, and Windows 10 has been downloaded on your system.” Myerson’s comment about updating the experience seems to indicate that Microsoft could intend to make changes as needed through the process of the Windows 10 rollout.

If your system isn’t fully ready to upgrade to Windows 10 when you’re able to upgrade, it sounds as if Microsoft can provide you some details as to why. “In some cases, we will include contact information so you can follow up directly with an application provider or device manufacturer to learn more,” Myerson writes. “For most upgrade incompatibilities, you may still choose to complete the upgrade, and find alternative compatible solutions in the Windows Store after you upgrade.”

Windows 10 Pro will be available alongside Windows 10 Home starting on July 29, and Myerson writes that customers who need to purchase volume licenses for Windows 10 Enterprise and Windows 10 Education will be able to do so beginning on August 1.

Tom Warren recently reported for The Verge that Microsoft is currently finalizing Windows 10 ahead of its launch later this month, with a release to manufacturing (RTM) build expected by the end of the week. Once the RTM build is ready, Microsoft will send the final copy of Windows 10 to its PC partners.

While the completion of the RTM process will be a milestone for Windows 10, Warren characterizes it as “a minor one” for Windows 10. Microsoft is moving Windows 10 to a “Windows as a service” model, which means that the operating system will be continually updated — part of the reason why Windows 10 is considered the “final version” of Windows. “We will never be done,” Myerson explained recently, and updates to the operating system are expected to roll out regularly in the coming months.

Microsoft has rapidly released new builds of Windows 10 to insiders, introducing minor improvements with each. While the readiness of Windows 10 is still up for debate, Microsoft recently squashed hundreds of bugs in the operating system in a single week. Hopefully, the process of developing Windows 10 with the feedback of 5 million Windows Insiders will prevent major bugs from finding their way into the builds Microsoft will release on July 29 and thereafter.