7 Current MacBooks and Macs: Which One Is Right for You?

Apple changes its lineup of Macs at different points throughout the year, making it hard to know at any given time which Mac is right for you. Since no new updates are due for awhile, now is a great time to buy many of the Macs and MacBooks on offer. Below, we’ll run through Apple’s entire current lineup of Macs to see which one is the right Mac for you.

Pros: The MacBook has a lot of stellar features. It has a pixel-dense Retina display, an ultra-thin design, a fantastically responsive trackpad, and fancy color options that range from silver to “rose gold.”

Cons: Two big complaints show up in reviews of this model, and those have to do with its keyboard and its single USB-C port. The keyboard is incredibly shallow, meaning the keys don’t move much when you press them, though most people say they get used to it after using it for awhile. The other big shortcoming is that it only comes with a single USB-C port, which means you’ll need to buy a bunch of adapters if you want to connect peripherals like an external hard drive or display.

Who it’s for: The standard MacBook is a solid computer for the average customer. It’s for people who do typical computer things like browsing the web, creating office documents, and watching videos. It’s not a workhorse like a MacBook Pro, but it has plenty of performance for everyday activities. It’s also small, light, and easily portable, which makes it ideal for people who do their computing on the go. 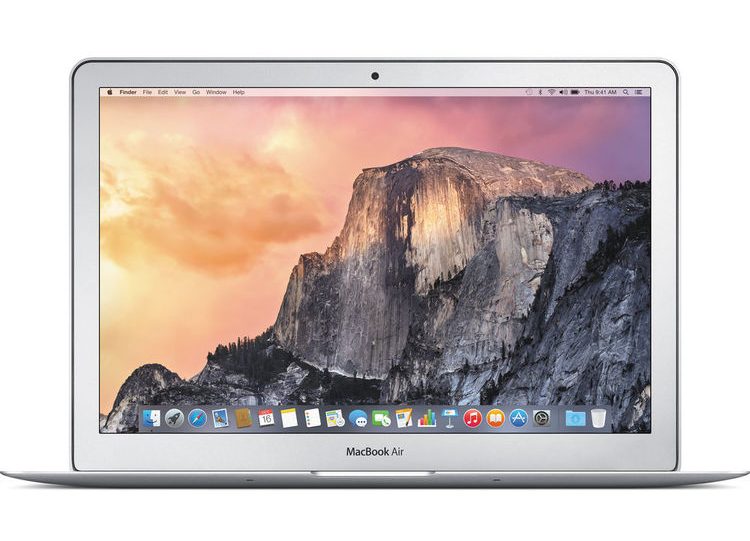 The MacBook Air is another great model from Apple | Apple

Pros: The price is the biggest selling point for the MacBook Air. It rings in as the most affordable MacBook on the market. It also gets an impressive 12 hours of battery life — two more than the previous MacBook.

Cons: On the downside, the MacBook Air doesn’t have a Retina display (not even 1080p), so the screen isn’t nearly as crisp as the rest of the MacBooks in the lineup. Also, the Air hasn’t been updated in nearly two years, making it the oldest MacBook still available. And now that the standard MacBook is actually smaller and lighter than the Air,  it looks like Apple will phase it out in the next year or so.

Who it’s for: Anyone in need of a portable Mac for whom price is the driving factor. Most people would be better off ponying up the extra $300 to get a standard MacBook instead. 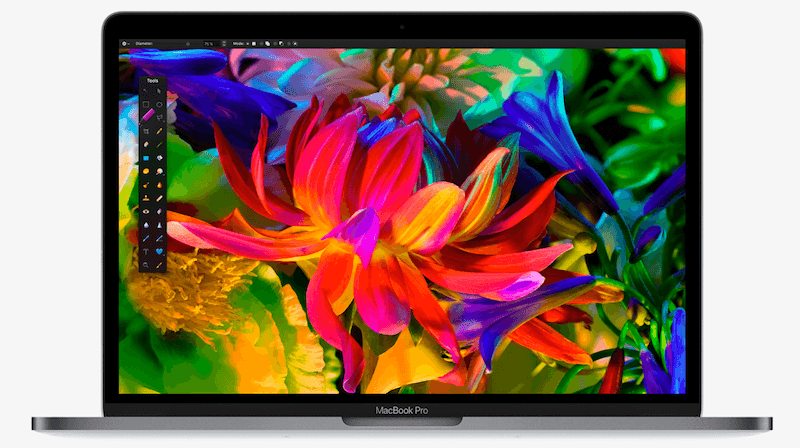 Pros: What makes this model worth $200 more than the standard MacBook? A few things. For one, Apple has reworked the ultra-shallow keyboard, giving this model a clickier feel. The keys might not sink down further when you press them, but a newly designed butterfly mechanism gives the impression that they do. It also has a larger track pad, more power, and more storage, in addition to being about half a pound lighter.

Cons: The price is probably the biggest downside to this machine. It starts pretty high, and if you want to add more storage or RAM, you’ll have to throw in a few more hundred dollars more. The lack of a dedicated graphics processor also prevents this model from being much more than a fancier consumer model.

Who it’s for: The entry-level MacBook Pro is for people who want speedy performance but don’t care about the Touch Bar or enhanced graphical capabilities. 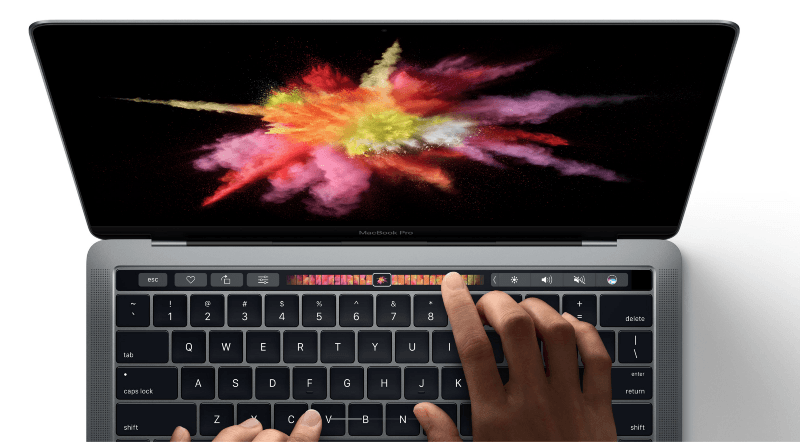 This Macbook comes with the amazing Touch Bar capabilities | Apple

Pros: The MacBook Pro with Touch Bar has all of the same pros and some of the cons of the MacBook Pro without a Touch Bar. In addition to the Touch Bar, this model also comes in more configurations, including 13-inch and 15-inch versions, as well as a wider array of upgrade choices (each of which add to the total cost, of course).

But the big feature here is the Touch Bar, a long, thin touchscreen that replaces the function keys on the keyboard. The consensus on the Touch Bar so far is that it’s not incredibly useful at the moment. But because it just came out, that could change as developers figure out how to make use of it.

The other great feature is a Touch ID panel built into the Touch Bar. Touch ID effectively replaces passwords with your fingerprint, making logging into accounts much more convenient.

Cons: As with the other MacBook Pro, the big downside here is price. You get the Touch Bar and Touch ID, as well as a few under-the-hood boosts, but this is still a pricy machine. Pro users also have complained that you can’t put more than 16GB of RAM in this model, though that won’t be a problem for most customers. Also, only the 15″ models come with a dedicated graphics processor for those who do design or graphics-intensive work.

Who it’s for: The MacBook Pro with Touch Bar is for anyone who wants the most powerful laptop Apple offers. Chances are, if your computing needs require you to have this machine, you already know who you are. 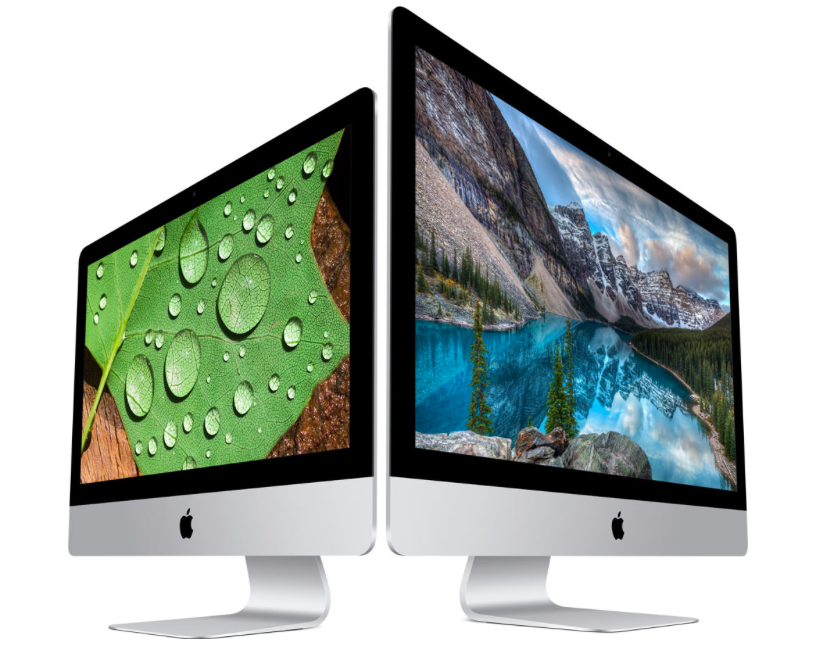 The iMac is ideal for any desktop computer lover | Apple.com

Cons: The biggest downside is that the iMac hasn’t been updated in some time, which means if you buy one now, it will be outdated before too long. Judging by past refreshes, Apple will probably update the iMac by the middle of 2017.

Who it’s for: Anyone looking for a great desktop Mac, especially one with a gorgeous display.

Pros: The Mac Mini is a nice-looking compact computer. It’s also the most affordable Mac in the entire lineup by a long shot.

Cons: The mouse, trackpad, keyboard, and display are all sold separately. This isn’t an all-in-one device you can use right out of the box, like the Macs above. It’s also pretty underpowered, seeing as Apple hasn’t updated it since 2014. It is due for an upgrade, but since it’s been so long, it’s unclear when that will come.

Who it’s for: Anyone looking for the most affordable Mac available. Many people also use the Mac Mini as a media center for their television. You can even set it up as a DVR with the right software.

Pros: The Mac Pro is designed for power. It’s extremely customizable and, unlike the other Macs, it’s easy for owners to open up to swap out parts.

Cons: Apple hasn’t updated the Mac Pro since it launched in 2013, which means it’s not up to par with competing beast-like machines.

Who it’s for: Most people don’t need a Mac Pro, but if you do, you’ll definitely know it.