Why Amazon Is Building a Google Glass Clone 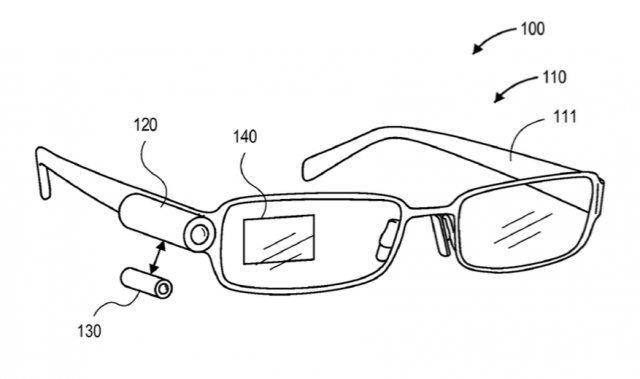 If it actually plans to implement a recently-published patent, Amazon could be looking to build a more practical clone of Google Glass, the infamous pair of smart glasses whose first model was, by all accounts, a failure (albeit the right kind of failure, as Tech Cheat Sheet argued earlier this year).

Patent no. US20150168727 describes a “wearable computer device” that “may include multiple imaging devices or other sensors working in concert to recognize conditions, objects or areas of an environment in which the wearable computer is situated.” The wearable could include an imaging device and a sensor that’s configured to “perform one or more specific tasks, such as recognizing particular items.”

The patent adds that “upon the execution of a specific task by the sensor, information or instructions regarding the specific task may be provided to a wearer of the device, or may cause the imaging device to automatically operate to gather further information.” Translation? According to Mark Sullivan at VentureBeat, the device “could be used to turn Jeff Bezos’s army of warehouse employees into pseudo-cyborgs that can quickly identify items for shipping.”

Because the computer integrated into the wearable can recognize where objects are in a given area, the device could help Amazon’s warehouse workers more quickly find items to fulfill orders. The glasses also have a sensor that can recognize objects associated with a given task, so the glasses could recognize package markings like mailing addresses, bar codes, or QR codes to make the fulfillment process more efficient.

The glasses could provide workers with specific, textual information in the lens, which would enable error-free identification while enabling the user to keep his or her hands free. When the sensor in the glasses recognizes a target object, it could deliver information to the user about what to do with the item. Or, as Sullivan notes, it could simply deliver more information about the object, such as its shipping destination or shipping method.

Amazon’s patent is yet another illustration of how smart glasses have significant potential in industrial and enterprise settings, even as they’ve failed to appeal to the general consumer. Chris Taylor wrote for Mashable last year that Google Glass was beginning to demonstrate its potential in “that most mundane of business environments: the warehouse” as a fulfillment company in the Netherlands called Active Ants gave Google Glass to its stock pickers.

During a week-long experiment, the company, which at the time shipped orders for about 50 online stores, found that giving Google Glass and a couple of custom-built apps to its warehouse workers reduced their error rate by 12% and increased their speed at picking stock by 15%.

“Translate that to a major fulfillment operation, such as Amazon,” Taylor reported, “and you could be talking millions of dollars in savings.” Jeroen Dekker, a managing partner at the Dutch company, said that there were four major benefits of using the wearable to make stock picking efficient:

The first benefit here is that the picker’s both hands are now free to access products in the shelves. The second benefit is the step towards a paperless world: lists no longer need to be printed, signed and bound. The third and probably the biggest advantage is the time saved by sending orders directly to the Google Glass, without first printing, signing and binding them. The fourth benefit is error reduction. Since the orders appear one by one on the Glass, orders cannot be mixed or forgotten. The traditional paper pick list contains a long list of all orders, which increases the chance of mixing up or missing orders.

Jean Lahaye, another Active Ants managing partner, said that the success achieved in the experiment was just the beginning, since the apps the company had built for the trial were still rudimentary. “We now have a first working version that’s running very well, but much more is possible,” he said of Google Glass’s potential. “We are yet to make use of product images for efficient product recognition and error reduction. This will certainly be taken up in version 2.0.”

The device in Amazon’s patent likely isn’t intended for a general consumer, no matter how tech-savvy. (Amazon is, hopefully, leaving that to Google to pull off.) Instead, Amazon’s likely looking toward smart glasses as a logical next step in streamlining its massive fulfillment operation, even as it works to further automate its warehouse operations and even make deliveries by drone. A pair of smart glasses with apps built to optimize the fulfillment process could help Amazon to save time and money throughout its massive network of fulfillment centers. And at the huge scale but slim profit margins at which Amazon operates, every little bit of savings counts.