Why Apple Users Should Not Use the New Adblock Browser 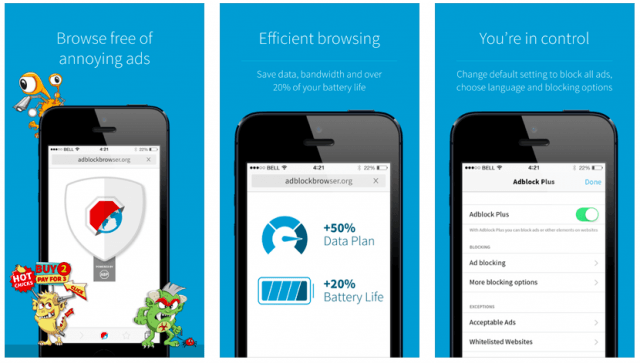 In the weeks before Apple opens its mobile Safari browser to ad-blocking with the release of iOS 9, Adblock Plus creator Eyeo is capitalizing on the media frenzy over Apple’s enabling of content-blocking apps. It just launched the “first official ad blocker for iOS,” the new Adblock browser that’s available not only in the App Store for iOS, but also in the Google Play Store for Android. By default, the browser will only block ads that it deems “annoying,” but you can change it to block all ads, elect to disable malware and tracking, and choose to whitelist your favorite sites.

The Adblock browser for iOS is built on an extensible iOS browser called Kitt, which enabled the company to adapt the existing Adblock Plus extension for Chrome. The AdBlock browser for Android has been in beta since May, and was completed with the help of feedback from 78,000 beta testers.

So should you download the new browser? Here’s our simple recommendation. While the browser is a good option for Android users who are tired of wasting time, battery power, and data usage on loading ads, iOS users can afford to wait to see what other options iOS 9 brings. Read on for the reasons why Android users should download the Adblock Browser while iOS users should wait.

1. The question of timing

The timing of the release, which Eyeo hopes will work in its favor, actually should make it easy for iOS users to pass on the AdBlock Browser — at least for now. In announcing the advent of the Adblock Browser, Eyeo’s Ben Williams notes triumphantly that “Timing is crucial here,” since Apple is expected to announce ad-blocking in iOS at its September 9 event. That should make ad-blocking possible in Safari in about two weeks — two weeks during which Eyeo hopes thousands of users will install its new browser.

Eyeo tells VentureBeat’s Paul Sawers, however, that the timing of the iOS launch is purely coincidental, and that the development of the browser was underway before iOS 9’s enabling of content-blocking extensions was revealed. “We’ve been developing Adblock Browser for months, long before Apple made the announcement about iOS 9.” Eyeo also says that it will launch a tool that uses Apple’s new tools for blocking ads in Safari, but in Williams’ comment and in the company spokesperson’s conversation with VentureBeat, the company hasn’t revealed exactly what form that software will take. Because new options, both from Eyeo and from a host of other developers, will arrive shortly, it’s a good idea for iOS users to wait and make an informed decision about which content blocker they want to install.

2. A lack of verified data on performance gains

One of the worst things about trying a new tool or piece of software immediately after its launch is that you’ll have to trust the developer’s claims about its functionality, or else wait for enough time to elapse that there’s independent verification to consult. The new Adblock browser is no exception.

Eyeo argues that using its browser on Android or iOS will cut your data usage, save your phone’s battery power, protect you from malware-laden ads, protect your privacy, and save you the annoyance of dealing with ads that obstruct online content. It would be difficult to argue with any of that. But while Eyeo has shared some GIFs to illustrate “how our Adblock browser kicks Safari’s ass” — and the browser’s App Store page claims that the browser will save up to 23% of your battery life and up to 50% of your data plan — there’s not yet any independent data to support those specific claims.

More practically for iOS users who will soon be able to weigh multiple options for ad-blocking, there’s not yet any way to verify how the Adblock Browser’s performance compares to Safari’s when Apple’s browser is enabled with a content-blocking extension. As Eyeo admits, on web pages with only a few ads, the speed of its browser is comparable to that of Safari. In a few cases, the cursory investigation even shows that the Adblock Browser takes longer to load pages than Safari does. So how will the performance gains offered by Eyeo’s browser compare to those offered by the addition of a content blocker to Safari? We simply don’t know yet, but it won’t take more than a few weeks to find out.

3. The likelihood of better options right around the corner

Though such options aren’t yet able to be tested under the circumstances in which most iOS users would install them, early trials of experimental ad blockers indicates that better options than Eyeo’s Adblock Browser are likely on their way. Owen Williams reports for The Next Web that it’s unlikely that AdBlock’s software will be as efficient as software built on the tools that Apple is releasing with iOS 9. Adblock blocks advertising as it’s loaded by the browser via JavaScript, while content blockers created for Safari in iOS 9 will be able to block it before it’s loaded at all at a system level. That should offer superior performance improvements than what Eyeo’s browser is able to accomplish.

For instance, the developer behind Crystal, an experimental ad blocker for iOS, reports that pages load 3.9 times faster and use 53% less bandwidth than when loaded without the ad blocker. The Next Web illustrated the performance gains with GIF sets from which Adblock seemed to take cues, demonstrating how dramatically the ad blocker reduces the load time for advertising-heavy websites. It’s not yet clear whether Apple will allow full-featured ad blockers like Crystal in iOS 9, or will simply enable developers to distribute tracking blockers like Disconnect. But as the Cheat Sheet recently reported, it’s likely that Apple will enable full ad blockers, since it stands to gain substantially by doing so.

4. The inconvenience of switching browsers

If you don’t use many of the features that are unique to Safari’s integration throughout the iPhone and across other Apple devices, switching browsers, even temporarily, may not pose a major inconvenience to you. But for users who have come to rely on features like Handoff or iCloud Keychain, using Safari on the iPhone alone or in concert with Safari on other devices offers major benefits. For those users, switching away from Safari when content-blocking functionality will land for Safari in just a few short weeks just doesn’t make sense.

If, on the other hand, you’re an iOS user who’s undeterred by any of these arguments, you might argue that mobile advertising is, itself, an inconvenience. And there, we agree. If you’re willing to troubleshoot and to watch your options change significantly over the coming weeks and months, it’s hard to advise you to forego installing an ad-blocking browser that will protect you against prevalent malware, persistent trackers, and advertising that slows down the already abysmal mobile web.