Why BlackBerry May Make Only Android Phones in the Future 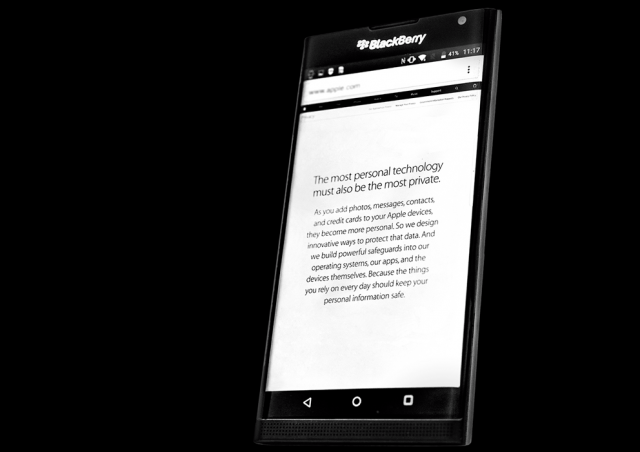 BlackBerry is finally acknowledging that Android and iOS have a duopoly over the mobile operating system world, and is preparing to launch its first Android device: the BlackBerry Priv. That’s a big change for the company, but even bigger changes may be in the works as BlackBerry considers only making Android phones in the future.

Ron Amadeo reports for Ars Technica that BlackBerry is not only avoiding committing to future BB10 devices, but is even hinting that it might consider leaving the smartphone hardware market altogether. BlackBerry chief executive John Chen was recently interviewed at the Code/Mobile conference, where he was asked about the future of BlackBerry and what the first Android BlackBerry phone means for the company. “Android in enterprise is a very underserved space,” Chen responded. “With our connection, our accounts, our knowhow, it has expanded our servable market. I love BB10 and I win in the very high-end there. But the very high-end is not big. In order to make money in the handset business, I need to expand that pie.”

In Amadeo’s assessment, Chen’s statement that the switch to Android is about selling phones is also an admission that most smartphone buyers don’t want a phone that runs BlackBerry’s operating system. “That’s a pretty obvious thing to say about an operating system with a 0.3% market share,” Amadeo writes, “but still good to hear from the CEO.” When asked if there would be any new BlackBerry 10 devices “in a year or two from now,” Chen was noncommittal, replying, “Well that’s going to be dictated by business choices.” That could mean that if the Priv sells well, BlackBerry would consider making Android phones full-time, leaving its own operating system behind.

Chen is clearly considering a number of different options for the company he helms. He told the audience at the conference, “Sometime next year we have to make our device business profitable, otherwise I have to rethink what I do there. My job is to make sure the value of the company is protected and increases. We do what makes sense to serve the customer.” He raised the hypothetical idea of leaving the smartphone hardware business altogether, noting, “Even if I’m not in the handset business, getting into providing security for Android lets us provide solutions via software.”

Amadeo reports that since Chen floated the ideas of a complete switch to Android or an exit from hardware during the interview, he seems “ready to do whatever it takes to stop his company from becoming the next Nokia.” It might seem that BlackBerry has waited until the last minute to attempt to turn things around with Android, but many thing that the Priv will be an interesting, even exciting, phone from what is, by all accounts, a struggling company.

As BlackBerry takes a new direction with the Priv, however, it won’t abandon one of its traditional focuses and strengths: security. Chen explained, “We’ve created a patching mechanism that will address attacks a lot quicker than others to protect the customer,” Chen said. “There are many safeguards and locks in place, but it’s not foolproof 100%, nobody can say that. We’re probably the same level as Samsung’s Knox. The only other commercial phone that can say they have the same or better than us is maybe the BlackPhone.”

BlackBerry is currently preparing to release two new versions of BB10 that have advanced security features geared toward government clients. The Android-based Priv smartphone will come out later this year, and will feature a physical keyboard that doubles as a trackpad. Security features are central to the smartphone, especially those that are needed by enterprise users, such as those working in governments and in hospitals.

Dan Seifert reports for The Verge that it’s been nearly impossible to purchase a BlackBerry device in U.S. carrier stores for years now, and most people don’t think of the company when they consider buying a new phone. Chen says that he’s working directly with carriers to sell the Priv, which BlackBerry hopes will propel it toward sales of 5 million smartphones a year. While that’s a small figure for Apple or Samsung, it will be a major challenge for BlackBerry; in its most recent quarter, the company sold just 800,000 phones.