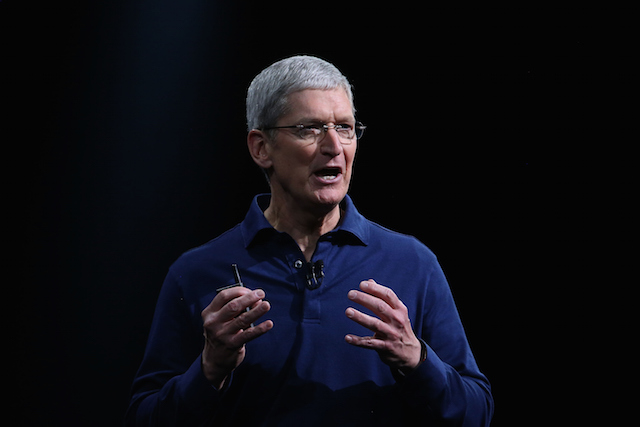 Onstage, Federighi noted that the new software to be introduced with iOS 9 will try to anticipate the information you need, based on your calendar and location, as Google’s software already does. But he added that “we do it in a way that does not compromise your privacy. We don’t mine your email, your photos, or your contacts in the cloud to learn things about you. We honestly just don’t wanna know.” He told the developers at the event and a broader audience around the world that all of the information processing is done on the device and stays on the device, “under your control.” If Apple does need to perform a search online, it’s anonymous, not associated with your Apple ID, and not shared with third parties.

Even as privacy becomes a key marketing point for Apple — the prominence of the topic at the company’s annual developers conference coincides with its campaign of speeches, TV appearances, and other messages to emphasize that Apple stands for privacy and, by default, its top rival Google does not — Mossberg points out that Apple’s argument for privacy isn’t airtight.

While Mossberg thinks that the company is sincere in bolstering users’ privacy and believes that Apple’s hardware and software is, in fact, designed to keep sensitive data on the device rather than in the cloud, its case isn’t impregnable. It’s able to use privacy as a marketing point because privacy fits in with Apple’s business model and is harder to reconcile with that of Google, a company that relies on the collection of massive amounts of user data for ad targeting. Apple’s business model depends on selling hardware and software.

“Apple can have its cake and eat it too, to some extent,” writes Mossberg. “It encrypts its phones, and it has internal rules which prevent its own apps — like Siri, iTunes and Apple Maps — from fully cross-pollinating and sharing certain information.” But your iPhone serves you the same kind of software that Apple takes a stand against; Google is the default search engine for the mobile Safari browser, Siri relies on Microsoft’s Bing, and Facebook and Twitter are integrated into the phone for sharing. And many of the 1.5 million apps built for iOS rely on data collection and advertising.

But Mossberg thinks that Apple and its chief executive, Tim Cook, still deserve credit for publicly rebuffing government calls for policies that would make it easier for “spy agencies to probe encrypted Apple hardware.” And Mossberg isn’t the only one; TechCrunch’s Josh Constine reports that Edward Snowden has expressed his support for Apple’s newly-emphasized commitment to privacy, whether or not Cook is being entirely genuine.

Speaking over video conference during the Challenge.rs conference in Barcelona, Snowden offered his thoughts on Cook’s recent acceptance speech for an Electronic Privacy Information Center Award. Snowden posits that it doesn’t matter whether Cook is being genuine or not because he has “a commercial incentive to differentiate himself from competitors like Google,” and in so doing, directing Apple’s business model “to be different, to say ‘we’re not in the business of collecting and selling information. We’re in the business of creating and selling devices that are superior.'” Snowden added:

And we should support vendors who are willing to innovate. Who are willing to take positions like that, and go “You know, just because it’s popular to collect everybody’s information and resell it..to advertisers and whatever, it’s going to serve our reputation, it’s going to serve our relationship with our customers, and it’s going to serve society better. If instead we just align ourselves with our customers and what they really want, if we can outcompete people on the value of our products without needing to subsidize that by information that we’ve basically stolen from our customers,” that’s absolutely something that should be supported. And regardless of whether it’s honest or dishonest, for the moment, now, that’s something we should support, that’s something we should incentivize, and it’s actually something we should emulate.

Snowden seems to agree with analysts and industry watchers who posit that it would benefit both Apple and society if the company became more transparent about security and privacy, as it’s in the process of doing now. Apple’s press releases and Cook’s public appearances have been well-received by the public because they run so dramatically counter to the actions of companies like Google and Facebook, which aggressively collect personal data.

But Constine notes that even as consumers say that privacy is important to them, they are unwilling to stray from products that rely on mining their data. (For evidence, take a look at the latest and widely-publicized “Who Has Your Back?” report from the Electronic Frontier Foundation. Though Apple and others earned top marks, many tech companies behind popular products received low ratings — and many users are loath to abandon these products even when they know their data is being collected and traded upon.)

It’s possible that privacy will become a real market advantage as users become aware of the fact that there can be an alternative to handing their data over to giant tech companies. But in the meantime, Apple and like-minded companies will need to get creative about how to offer convenience and excellent functionality without compromising their principles or failing to compete with companies who aren’t as committed to users’ privacy.