Why Microsoft Is Partnering With This Popular Android Startup 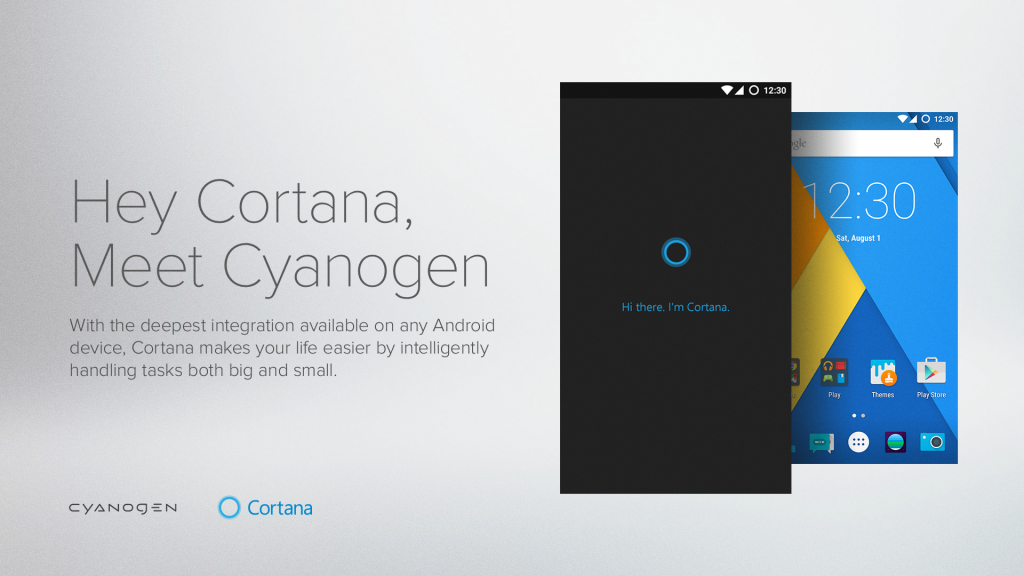 Microsoft recently announced that it was bringing its Cortana digital assistant to platforms beyond Windows 10 by releasing apps for iOS, Android, and Cyanogen OS devices. The company’s blog post explains that “while the Cortana app is fully-featured, there are some things Cortana can do on Windows phones that aren’t currently possible with iOS or Android.”

While the Cortana app for your Android smartphone or iPhone won’t match what Cortana’s capable of on Windows, Cortana will be more capable on the OnePlus One, which runs Cyanogen OS. Microsoft explains that thanks to a “close partnership with Cyanogen, we created a more integrated experience to enable Cortana’s voice activation ‘Hey Cortana’ on Cyanogen devices so you can call on her while on any screen or when you’re immersed in an app.”

Microsoft characterizes the development as “just the start of our partnership” with Cyanogen. Cortana will roll out to other Cyanogen OS devices “early next year with even greater functionality, and we look forward to doing even more together in the future.” But let’s backtrack for a moment. What is Cyanogen, again? And why is Microsoft allying itself with a startup that most people don’t know much about?

Cyanogen is a startup that makes a popular distribution of Android. As Julie Bort points out at Business Insider, the startup has previously said that it wants to “take Android away from Google,” a goal that it’s making continual progress toward, as Cyanogen is now being used by more than 50 million devices.

Android is an open-source operating system, one that any company can make its own. The way companies do that varies, from Samsung and HTC’s additions that promote their own apps and services to full-blown forked versions of Android, like Amazon’s version, which runs its Fire tablets and phones.

As Lisa Eadicicco reported for Business Insider early in the year, most of those companies have done little to challenge Google’s control over Android. But Cyanogen, a startup with a significant amount of funding, makes Android better than it is under Google. The software is cleaner, is updated more often, and Chinese smartphone makers are increasingly more willing to use it. Eadicicco predicted, “If Cyanogen takes off, it would wrest away some control of Android.”

Rumors have long been circulating about Microsoft’s involvement with Cyanogen. Bort reports that for a time, rumors held that Microsoft was planning to buy Cyanogen “and finally dive headlong into the Android operating system market.” After that, another rumor alleged that Microsoft was going to invest in Cyanogen, which raised $80 million in March from investors like Twitter, Rupert Murdoch, Qualcomm, Telefónica, Index Ventures, Access Industries, Tencent, and Andreessen Horowitz.

But ultimately, Microsoft neither acquired Cyanogen nor invested in it. Instead, it forged a partnership with the startup, with the intention of deeply integrating Microsoft products like Skype and Office into Cyanogen’s version of Android. Peggy Johnson, executive vice president of Microsoft’s Global Business Development, explained to the audience at a recent Business Insider conference why Microsoft decided to partner with Cyanogen, instead of buying or investing. It’s taking a wait-and-see attitude toward the startup.

Johnson explained that in Microsoft’s assessment, “Cyanogen is doing something fairly basic,” and added that “at this time, it feels like it makes more sense to partner to see how its journey is going.” She noted that “partnerships are sometimes about exploring,” and added that other options haven’t been ruled out. “We’ll stay close to them and continue to look for more ways to partner.”

For now, the most tangible result of that partnership is the integration of Cortana at a system level into the OnePlus One. As Karissa Bell reports for Mashable, pending a software update that’s expected to land later this month, users of the OnePlus One will be able to say “Hey Cortana” to invoke the digital assistant, or use Cortana to adjust system settings, like changing network modes, activating quiet mode, and even turning off the device. The OnePlus One is just the first Cyanogen OS device to get the Cortana integration, and Microsoft is planning to make the assistant available on more Cyanogen devices, as well.