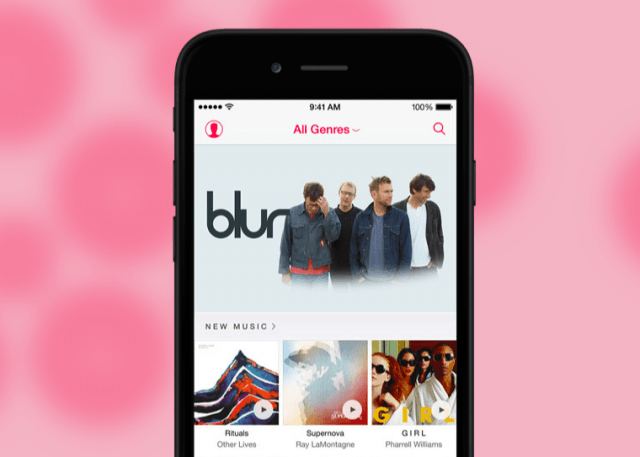 Users are still trying to figure out what to think about Apple Music, Apple’s newly-launched entrant to the crowded area of music streaming services. And bloggers, analysts, and industry watchers are just starting to get a handle on the techniques that Apple will use to try to distinguish its service from the rest. It turns out that song and video premieres, rather than exclusives, look like they’re going to be a big part of that strategy.

Reporting for TechCrunch, Josh Constine reports that originally, the idea of Apple Music worried him. Apple has the money to buy exclusives that could “fracture” the world’s music catalog. And as Constine explains, “The problem with exclusives on services like Tidal or Spotify is that only the tiny percentage of people who pay for their subscriptions can hear these songs when they want. It could have been the same with Apple.” But Apple has proven early worriers wrong by revealing that Apple Music’s strategy is premieres, not exclusives.

As Juli Clover reported recently for MacRumors, Apple uses exclusive content and interviews “as a way to lure customers and distinguish itself from the myriad other music services available.” It’s premiered a number of different tracks and videos, and rumors indicate that some of the exclusive videos that Apple has offered were developed in-house, with Apple working alongside prominent artists to produce content specifically for Apple Music’s users and the wide base of users who can access its content without a subscription via Apple Music Connect.

Through Apple Music Connect and Beats 1 Radio, Apple can both attract debuts from the biggest artists in the world, and still make them available to everyone for free. That both attracts users to Apple Music’s three-month free trial, and is much friendlier to users than exclusives on apps like Tidal and Spotify. Sources at major music labels say that Apple Music has hit 10 million signups, though all of those are still in the free trial period. Apple chief executive Tim Cook said on the company’s recent earnings call that Apple Music has attracted “millions and millions” of users, and 15,000 artists have signed up for Connect. By contrast, Spotify, one of Apple Music’s major rivals, launched in 2008 and took two years to hit 10 million users. It now has 75 million total users, 20 million of whom are paid subscribers.

Apple Music has already premiered a number of high-profile releases, including new songs and videos by The Weekend, Drake, M.I.A., Skrillex and Vic Mensa, and the Black Eyed Peas. It pushes them to as many users as possible instead of locking them behind a paywall, and is reportedly even paying to help produce some of the music videos. Apple also isn’t trying to keep the songs off of other services, and Constine reports that past premieres like Pharrell’s “Freedom” and Eminem’s “Phenomenal” appeared as audio tracks on YouTube and Spotify several days later. The video for the Black Eyed Peas’ “Yesterday” appeared on YouTube mere hours after its debut on Apple Music Connect.

Constine thinks that Apple’s plan to use its reach and connections to coordinate premieres could offset what he characterizes as “Apple Music’s product problems.” (Users have criticized Apple Music’s performance, its unexpected glitches, and the newly complicated nature of iTunes.) In fact, Apple has already established a “playbook,” of sorts, for premieres, and Constine has mapped out exactly how it works.

The songs first get played on Beats 1’s primetime morning slots, then begin to appear on iTunes Radio stations. Following that, the artists share them on the Apple Music Connect feed, which enables full songs to be shared on social networks. As Constine notes, all of these channels are open to anyone on web or mobile without a $10 per month Apple Music subscription. From there, Apple Music’s editors can push the new songs to the app’s “For You” or “New” tabs for even wider exposure. Constine has observed that eventually, the singles get pulled back behind the paywall, so that they’re available only to subscribers for artists to earn royalties, while the videos remain available for free.

The massive exposure of a premiere on Apple’s platform is “the modern Ed Sullivan Show, the Rolling Stone cover, the MTV Total Request Live,” according to Constine. ” Smart musicians know that fame equals concert ticket and merch sales, sponsorships and licensing deals.” The strategy gets people around the Internet to follow musicians on Apple Music Connect, which “creates a beachhead from where artists can get their fans to share their latest songs to social.”

Ultimately, Apple Music needs to compete with other popular options like Spotify. With Spotify’s ad-supported tier, users can listen to anything they want on the web. But on mobile, those outside of the paywall are stuck with shuffle play. As Constine points out, that makes exclusives and premieres less accessible on Spotify than on Apple Music. Additionally, he posits that Apple will want to prove three things with Apple Music premieres: that Beats1 and Apple Music Connect can draw a wide audience to premieres, that Apple Music can build an audience that eventually drives significant royalties, and that the platform enables artists to connect with a loyal base of users who will not only consume new content, but will also buy tickets and merchandise.

Constine agrees with other reviewers who have noted that there are some smart improvements that Apple Music could make. Constine suggests that Apple could make it easier for users to find and follow the artists they like listening to, which would both make the interface better of users, and help artists connect with the hundreds of millions of iPhone users who already have the app installed. The premieres give those users a reason to open Apple Music in the first place, and could give you a compelling reason to use Apple Music instead of one of the many other streaming services you can choose among.