Would Steve Jobs Have Loved (or Hated) the Apple Pencil? 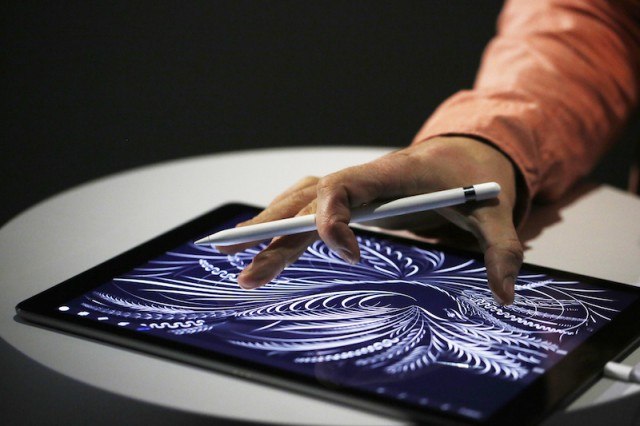 Many people thought that the day Apple unveils a stylus would never come. But if you were of that opinion, the company proved you and countless others wrong when it unveiled the iPad Pro and the accompanying Apple Pencil at its annual iPhone event. The question now, among Apple fans, tech bloggers, and anyone who remembers late Apple chief executive Steve Jobs denouncing the idea of a stylus at the unveiling of the original iPhone, is how the iconic Apple cofounder would feel about the Apple Pencil.

Nick Statt reports for The Verge that the crowd at Apple’s event laughed in unison when Apple marketing chief Phil Schiller announced the Apple Pencil, perhaps thinking back to the day when Jobs told the audience in 2007, “Who wants a stylus? You have to get em’, put em’ away. You lose them. Yuck.” But eight years later, it turns out that at least some users do want a stylus, particularly because screens, styluses, and the software that powers the interplay between them have all improved significantly.

In 2007, Jobs was rejecting the idea of using a stylus with a product that’s vastly different from the iPad Pro, a 3.5-inch iPhone, and was talking about screen and stylus technology that was significantly less sophisticated than what Apple has at its disposal today. The iPhone was one of the first to use a capacitive touchscreen, introduced multi-touch gestures like pinch-to-zoom, and offered a major improvement over the resistive touchscreens used in earlier smartphones.

Capacitive touchscreens, on the other hand, are much better for finger input than resistive touchscreens, and that’s why Jobs deemed a stylus unnecessary. Fast-forward to this year’s iPhone announcement, where Apple demonstrated that the Apple Pencil is a tool for professionals, artists, designers, power users, and others who want to use the 12.9-inch iPad Pro as if it were a sheet of paper and the Apple Pencil a real pencil.

Statt notes that Apple has been accused of playing catchup with the Apple Pencil, but Apple has been known to take its time to capitalize on obvious market trends, like larger smartphones, smaller tablets, or smartwatches, until the moment is right. “The same appears true,” Statt writes, “for a laptop-sized tablet that would require a $99 stylus, but only if you want it and feel like you really need it. If not, you can use your fingers. It’s what Steve Jobs would have wanted.”

David Pierce reports for Wired that “only Apple can make the perfect stylus it once spurned.” Testing the stylus, Pierce says he felt that the Apple Pencil is “better than any stylus I’ve ever used by a wide margin” because it offers the unique benefit of enabling the user to feel like they’re actually writing on the screen. Pierce explains that “the ink appeared to flow out of the Pencil and not trail half an inch behind. With the tiniest added pressure, the line became the tiniest bit thicker. I tapped on the No. 2 pencil mode, and it wrote and shaded just like all the pencils I used to sharpen with that wall-mounted thing you had to crank.”

So why is Apple’s stylus better than those made by the competition? The argument goes that Apple can make its products better because it controls both the hardware and the software on its platform. Pierce reports that making a great stylus begins with the device itself, and the display matters a great deal. With the iPad Pro, Apple re-engineered the touchscreen to make it more responsive to the Apple Pencil than to your finger, so that the system takes advantage of the precision of the Apple Pencil’s tip and the display updates more often with the stylus than it would with your finger. Sensors in both the display and the stylus measure position and pressure, and the software puts the two together to solve the problem of latency.

Pierce reports that the best styluses on the market have all come from companies “with something like complete control over the experience.” Apple has succeeded by combining software and hardware, thanks either to the company’s “mythical design lab” or “the sheer force of Steve Jobs’ will.” It’s the nuanced aspects of the interplay between Apple’s hardware and software that “enable Apple to take existing products, copy them fairly shamelessly—Oh, you built a tablet with a keyboard and a pen? You’re breaking some new ground there, Copernicus—and make them feel new again.”

The Apple Pencil and the iPad Pro are designed to go together seamlessly — though that does mean that other manufacturers’ styluses won’t get access to the same software and the same features that make the Apple Pencil something more than a simple stylus. But it demonstrates that Apple’s ecosystem works so well because all of the pieces fit together.

The 3.5-inch original iPhone didn’t need a stylus. And for many users, the 12.9-inch iPad Pro doesn’t either. But for the users who do need it, Apple is wisely offering an option that’s deeply integrated into the device’s design and capability. Tim Cook’s Apple doesn’t adhere to the letter of Jobs’ proclamations — after all, Jobs did insist that a phone didn’t need a screen larger than 3.5 inches. Instead, the company honors Jobs’ tradition of reevaluating the best way to do things, and leaves behind the limitations that even Jobs hadn’t yet seen beyond.