Would You Trade in Your iPhone For a New Samsung Phone? 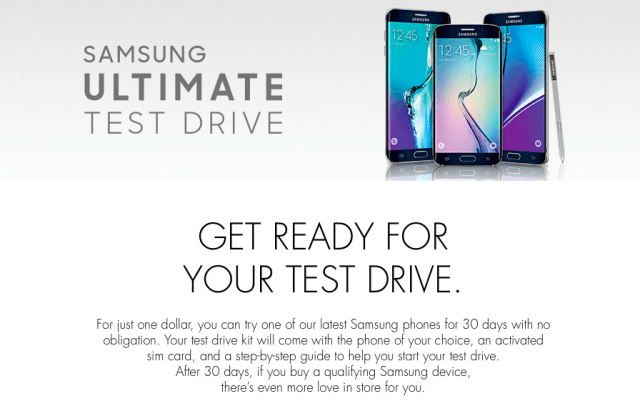 Samsung is making some 11th-hour moves to convert iPhone users to its new smartphones before Apple introduces a new iPhone next month. A promotion Samsung is calling the “Ultimate Test Drive” invites iPhone users to test out one of the company’s latest phones for just $1 — though within hours, the company reported that due to “overwhelming demand,” it was out of test drive phones.

But would you really trade in your iPhone for one of Samsung’s new smartphones, given the chance? Or is this just a last-minute effort on Samsung’s part to grab some attention before Apple debuts its next iPhone models at a press event early in September?

Jon Russell reports for TechCrunch that as Apple’s financial performance keeps getting stronger, Samsung’s financials keep moving in the wrong direction. And on its July earnings call, Apple said that it’s seeing record numbers of using switching from an Android phone to an iPhone — a trend that doesn’t bode well for Samsung. In an attempt to get ahead before Apple unveils its latest iPhone models, Samsung ditched its usual September release schedule and has already launched the Galaxy Note 5 and the Galaxy S6 Edge+, which directly compete with the iPhone 6 and iPhone 6 Plus. But as Russell notes, critics are already unsure of whether Samsung’s new smartphones can put a dent in the dominance of Apple’s iPhone, especially as Cupertino steps up the competition with a new iPhone, one that’s rumored to come packed with features like the Force Touch input method that Apple introduced with the Apple Watch.

Ina Fried reported for Re/Code that Samsung’s Ultimate Test Drive promotion has shaped up to be a squandered opportunity at such a crucial time. A Samsung representative told Fried, “In just a few hours, all of the kits earmarked for this program were reserved by customers looking to try our latest and greatest devices. We’re now working quickly on how to make the Ultimate Test Drive available to even more people.”

Hayley Tsukayama reports for The Washington Post that Samsung says that the promotion will go on as soon as it gets more phones — but Samsung is out of time, since Apple is expected to unveil new iPhones on September 9. That’s not a lot of time to change the minds of consumers who were planning on upgrading to a new iPhone, or those who are unsure now but will be swept up in the enthusiasm of the media frenzy surrounding the unveiling.

Both of Samsung’s latest phones are aimed at the same high end of the market where Apple’s annual iPhone release makes a monumental splash, though the main selling point of the Edge+ seems to be the appeal of its screen for video fans and gamers, while the Note is designed for users whose focus is on productivity. That contrasts with the iPhone, which is, famously, a one-size-fits-all, once-a-year release. Samsung’s new phones have more impressive specifications, unsurprisingly, than Apple’s year-old iPhone 6 and iPhone 6 Plus. But comparing smartphones, especially across operating systems, comes down to more than just the specifications.

As Preston Gralla reports for ITWorld, in a comparison of the S6 Edge+ and the iPhone 6 Plus, Samsung’s phone comes out on top in terms of pure specs. But what he terms the “S6 Edge+’s better hardware” isn’t enough to make fans of Apple’s iOS mobile operating system switch. “Do you prefer the simplicity and smooth elegance of iOS, or the more feature-rich but more difficult Android?” Gralla muses. “No winner here; it’s like arguing religion.”

While the Apple/Samsung rivalry is one of the most well-documented and widely discussed in the tech world, there’s no objective answer as to which flagship phone is better. And that’s because it’s difficult, if not impossible, to objectively compare operating systems. If you have an iPhone and love iOS, then you probably don’t want to switch to a Samsung device, no matter how impressive. (No surprises here.) If you have an iPhone and hate iOS, then you should absolutely consider switching to an Android device, by Samsung or by another manufacturer. If you have an iPhone and are indifferent about iOS, then what you’ll end up preferring is anyone’s guess, though if you want a second chance at falling in love with an operating system, Android is worth a try.

Samsung’s strategy of making a last-minute effort to grab the attention of iPhone owners with new smartphones will likely result in many happy converts — but probably not nearly as many as Samsung is hoping. Chipping away at Apple’s dominance will likely require a longer-term strategy, one that doesn’t involve a last-ditch promotion launched less than a month before Apple is expected to release new iPhones.