8 of the Best Thanksgiving Road Races

As much as everyone would like to say they love Thanksgiving for the time they get to spend with loved ones, we all know it’s about the food. The holiday is synonymous with delicious eats like stuffing, pumpkin pie, and turkey. According to the Calorie Control Council, Americans’ love of the eat-athon is so great that most will scarf down 4,500 calories by the day’s end. With this level of over-consumption, it’s no wonder folks have so much difficulty keeping off excess weight during the winter months.

A more reasonable approach to eating will lessen the damage and so will making sure you get a decent amount of exercise. You’re in luck — road races on Thanksgiving are practically the norm. The New York Times reported the last Thursday of November is now the biggest running day of the year, seeing a 16% increase in participation in races since 2011.

No matter where you live, there’s sure to be an event close by. Though any race will help you burn some calories and enjoy the great outdoors, some are true standouts. Head to one of these eight races for a fantastic start to your Thanksgiving.

The 42nd running of this 10,000-participant Denver event takes place in gorgeous Washington Park. Most adults will want to go for the 4-mile route, but there’s a ¼-mile fun run for those with little ones as well. Participants will get a t-shirt and access to the pre- and post-event celebrations, including a beer garden. This race is particularly good for folks from out of town because you can have your race packet and number mailed to you for a small fee. And good news for sleepyheads, this race doesn’t start until 10 a.m.

Another reason to check out this race? Proceeds go to Mile High United Way’s efforts to improve education and boost economic independence for families. Adult registration is $45 for the 4-mile race and $30 for the fun run. 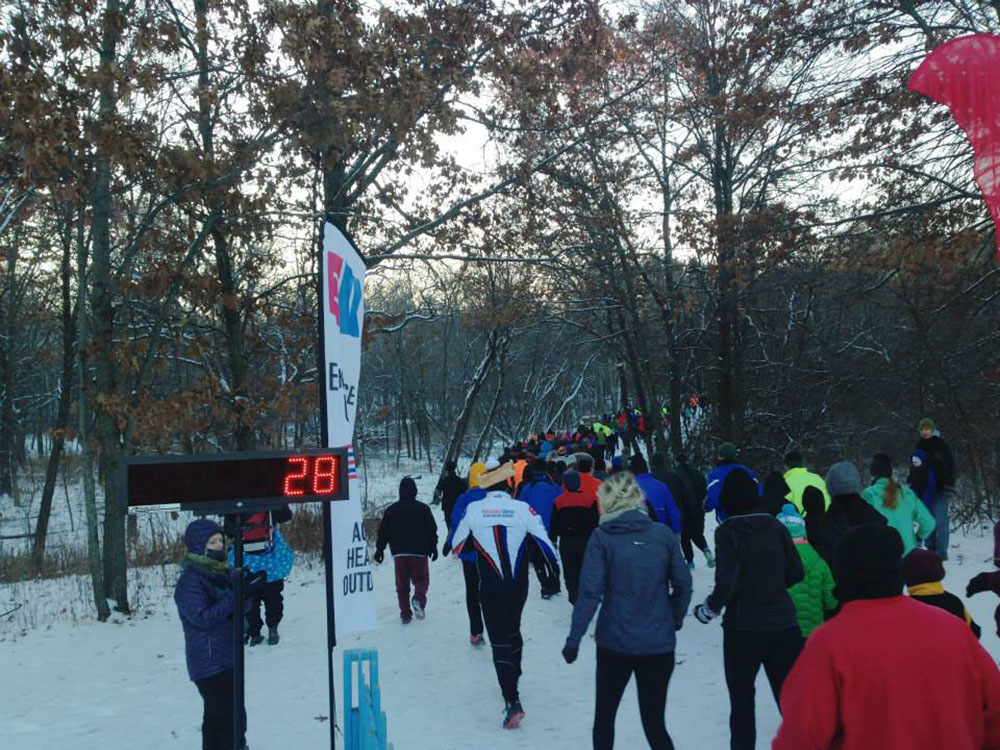 Road race is a bit of a misnomer for this Thanksgiving eventd, which takes place entirely on the trails through Battle Creek Regional Park. You can choose between the 5k, 10k, or a three-person 5k team run. The latter is a bit different than a typical relay in that all team members run simultaneously. Your overall time is a sum of each person’s individual time. The first 400 people to register will score a pint glass to fill up with cider after the event, so act fast.

Keep in mind, this is Minnesota. Snow is not out of the question on Thanksgiving and this race will take place even with a blanket of the fluffy white stuff. Only severe weather or lightning will lead to cancellation. 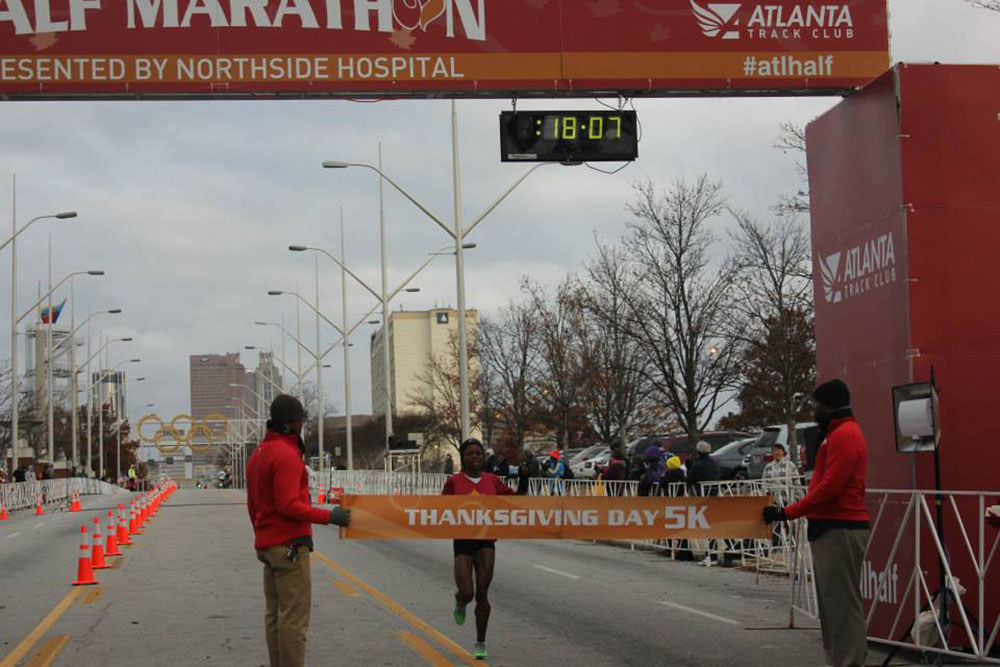 If you know you aren’t going to be able to resist digging into some massive portions later in the day, hit the road at this Atlanta half marathon. The course includes six water stations and goes past some cool sites like Centennial Olympic Park and the Georgia State Capitol. Those looking for something a little bit tamer can sign up for the 5k or 1-mile run. There’s also a 50-meter dash for kids who are 6 years old or younger.

One important note: There is no registration on race day and the last chance to sign up is November 18. The goods news is you get to pick up your packet either the Saturday or Sunday before the race, so you can avoid any last-minute scrambling. 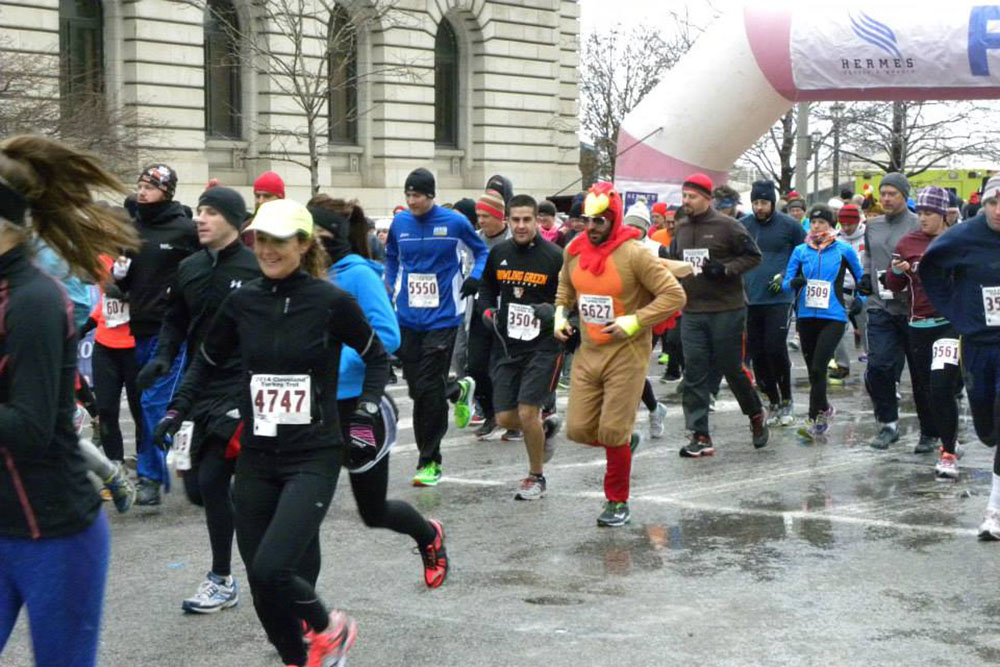 Perhaps the most flexible packet pick-up in history, November 4 through November 24, makes the Cleveland Turkey Trot one of the best choices for those with busy schedules. It’s also one of the most fun thanks to a costume contest that encourages just about any type of wacky getup. Choose from a 5-mile run, a 5k, or a 1-mile fun run for your pre-turkey workout. This event is also one of the biggest bargains at just $30 for the 5-mile if you register before Thanksgiving. 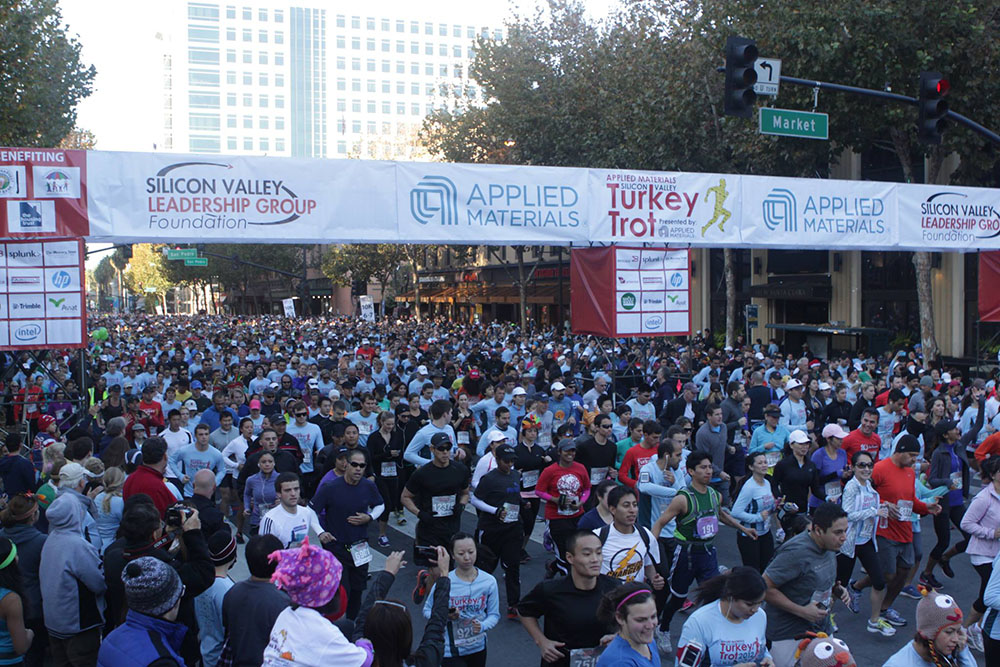 One of the youngest choices in the lineup, this 11-year-old race features a 5k, 10k, and wheelchair 10k. In that short amount of time, the race has managed to raise more than $5 million for charity. It’s an ideal event for kids with a few runs for varying ages and a fun zone that offers a variety of activities starting at 8:30 a.m. Serious racers will also appreciate this run because there’s elite category.

Participants who don’t stand a chance of winning any of the overall races still have some opportunities to win. There’s a costume contest, competition for the fittest company, and a chance to win some cool tech from HP. Registration for both the 10k and 5k costs $44. 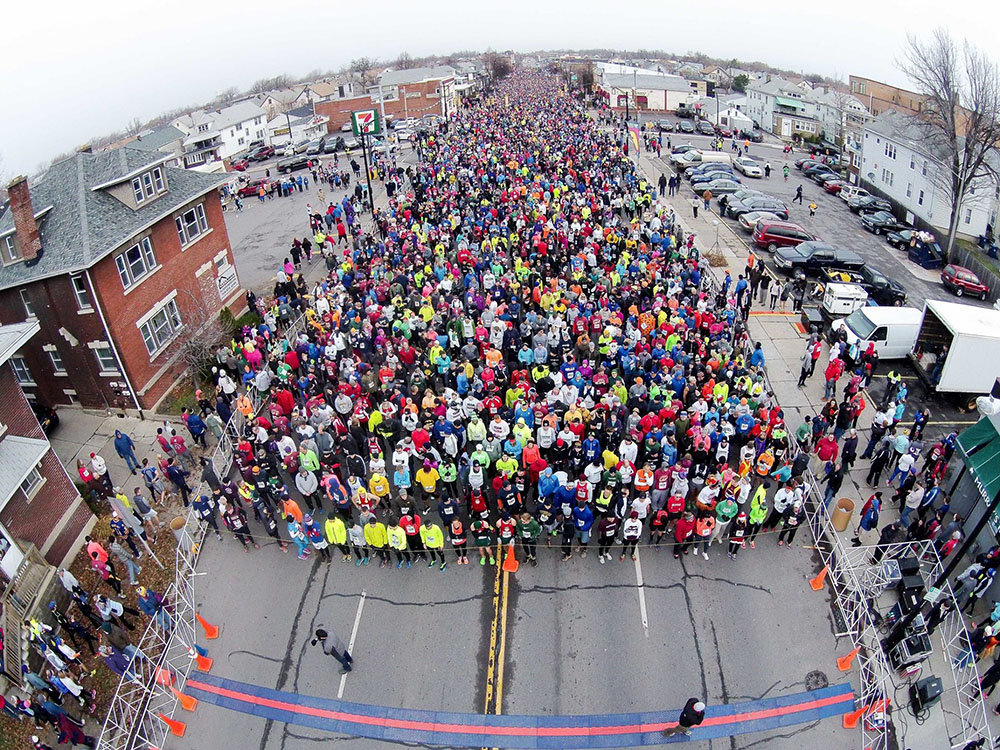 The streets of Manhattan are swarming with people interested in catching a glimpse of the Macy’s Thanksgiving Day Parade. Skip the hours of standing around and head north to this massive race in Buffalo. This year marks the 120th anniversary of the race, which attracts runners from around the globe. The course is an 8k that loops through downtown Buffalo and ends with a huge post-event celebration. Proceeds from the event go towards supporting families who otherwise wouldn’t be able to afford the YMCA’s programs and services. 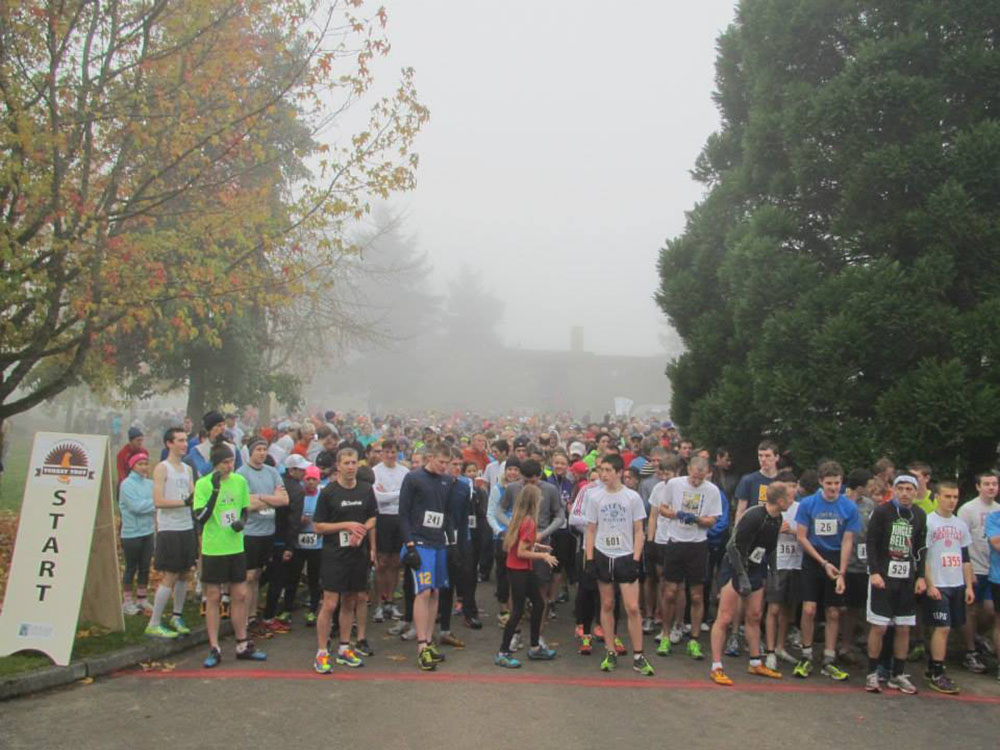 Though you’ll have to endure a 1-hour-long ferry ride to get to Bainbridge Island from Seattle, this small race is worth it. How small? Last year, 809 people completed the 5k. Amenities are sparse compared to bigger races, but you’ll only pay $20 if you register before Thanksgiving. The top three finishers in each age group win a prize, and so does every single person dressed in costume. 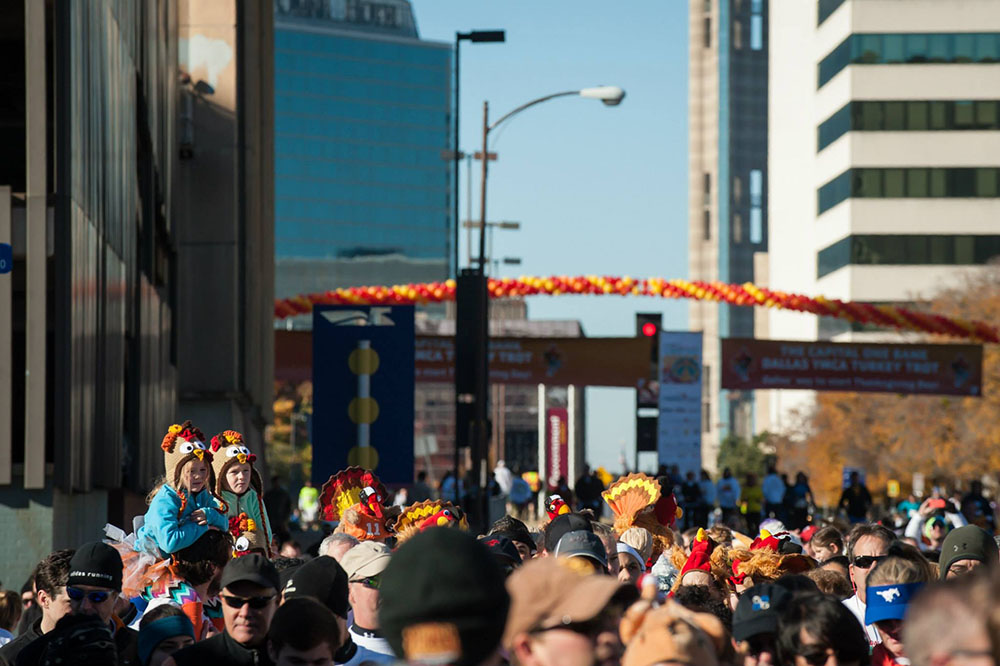 While it now features a 5k, this Dallas race started as just an 8-mile race that took a pretty relaxed approach to course markers. Apparently, participants were given little instruction but to run to a giant oak tree and then back to the starting line. Luckily, things are a lot more organized these days. Packet pickup is available every day from Saturday, November 21, until 9 a.m. the day of the race.