Tired of the hum-drum feel of going through the motions at the gym, fitness buffs are turning more and more to alternative forms of exercise to stay in shape. Tough Mudder is one of the standouts, boasting more than 2.5 million participants to date. The 10 to 12 mile routes are pretty much the most extreme form of obstacle course you’ll even encounter, featuring everything from rope swings to sprints through fields of electricity-charged wires.

It all makes you wonder who comes up with these crazy obstacles and how Tough Mudder brings them to life. It turns out the process is really a team effort, but lead obstacle designer and senior director of product Nolan Kombol leads the charge. We recently chatted with Kombol to figure out what goes on behind the scenes. He revealed it’s a combination of plenty of brainstorming, testing, and yes, lots of mud.

1. Striking the right balance of obstacles

As bizarre as some of the obstacles are, there’s a pretty specific method the Tough Mudder team goes through when it comes to figuring out what each course needs. Prior to coming up with any new ideas, the team takes a look at the existing list of obstacles, which they call the menu. “We break apart the menu into four different dishes that feed into what Tough Mudder is,” Kombol said. “And for us, that’s teamwork, personal accomplishment, courage, and fun.”

The goal is to find the perfect balance of each of these obstacle types, then craft the courses around them. As for the exact balance, it’s under wraps. “That’s kind of our secret formula,” Kombol said. “We’re always playing with that. It changes year to year, but it’s something we’re always trying to perfect.”

Unlike most other obstacle events, Tough Mudder isn’t designed to be a race. This means the teamwork component is incredibly important. “We don’t encourage anybody to try to finish first,” Kombol said. “That’s not a part of who Tough Mudder is.”

One of this year’s new obstacles, called The Block Ness Monster, proves the point. It’s a series of three massive rotating blocks floating in a pool of water. In order to get across them, you have to work with those around you to lift in tandem to help people over. “It actually requires about 30 people to coordinate their actions,” Kombol said. 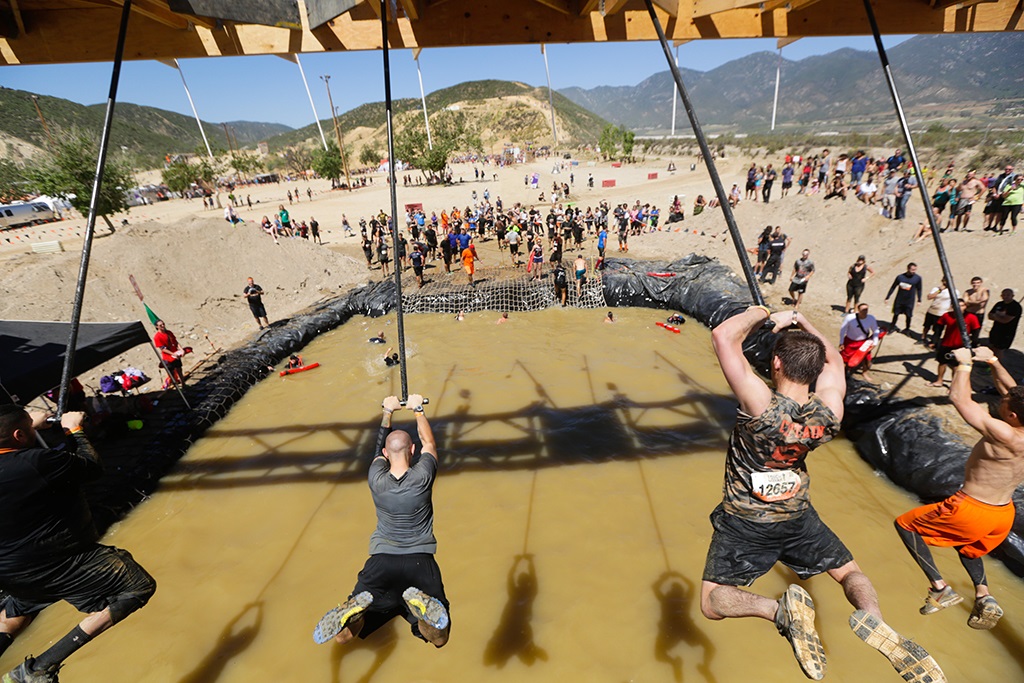 Once the team knows what obstacles the courses need, the ideation process can begin. Kombol typically assembles a group of eight to 10 people from a few different departments, and gathers them at the end of the day in front of a massive whiteboard. Then the ideas fly.

“We go by the brainstorming rule that there are no bad ideas,” Kombol said. After they have a solid list of ideas, they vote to narrow down the choices to the best four or five. The team then starts to draw them out on paper to see how they would work and if they’re actually feasible. After another round of voting, they cut the obstacle choices to two or three.

It’s not all insanity, either. Yes, Tough Mudder likes to shock their participants, but they still want to look out for everyone’s well-being. “We’ll take it to our safety committee and say here’s what we came up with for our concepts that we’re thinking about testing, then walk them through the plan of how they work.” If the obstacles get the green light, they can move forward to testing. 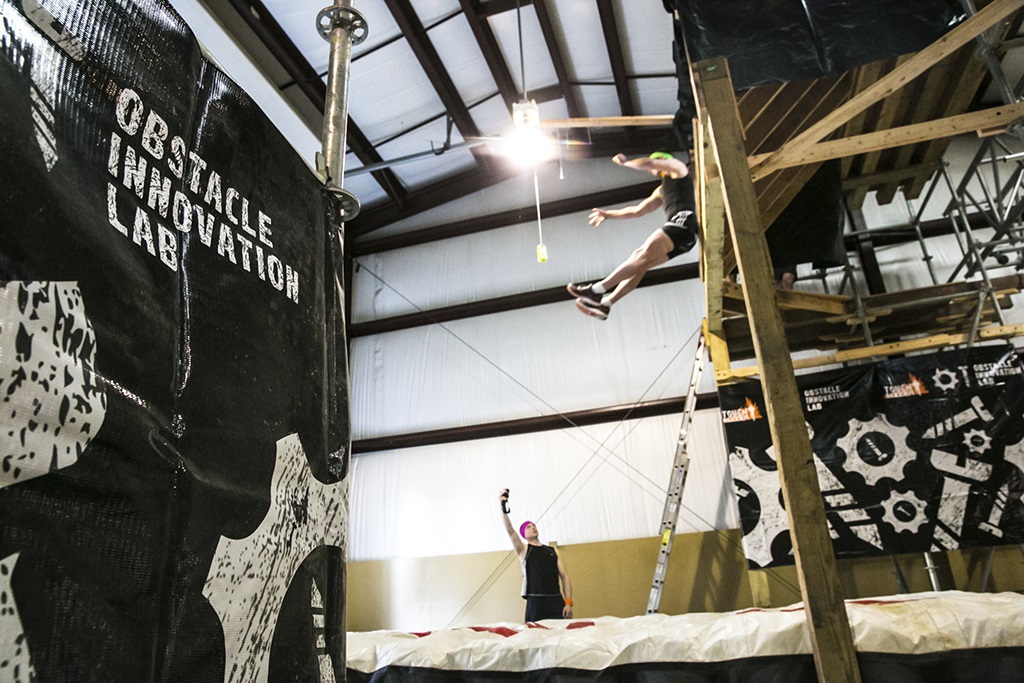 Before any obstacle makes it too far down the line, the team tries it out themselves. After a construction crew assembles the obstacles, the Tough Mudder guys and gals head out to a fields of New Jersey to give them a go. “We’ll take 15 or 20 people from the office to run the obstacles,” Kombol said. If the group is satisfied with the functionality of the obstacle and feel it meets the criteria for the prescribed category, they take care of any adjustments, including safety concerns.

The final step in the testing process is to do a sort of soft test at one of Tough Mudder’s regular events near the end of the season. Kombol explained, “We’ll build one of these obstacles out on a small scale and offer it to our Mudder Legion, who are people who’ve run one or more Tough Mudder events.”

For this testing process, the Mudder Legion will break off from the rest of the participants at the event to run through the obstacle being tested. After they’re finished with the event, they offer feedback and any ideas for ways to improve. “If we’re all satisfied as a product team, we’ll move it out into the roll-out phase, which means we’ll build it into the following year’s courses,” Kombol said.

From start to finish, the entire brainstorming and testing process takes about a year, with three months devoted to physically building out the course. 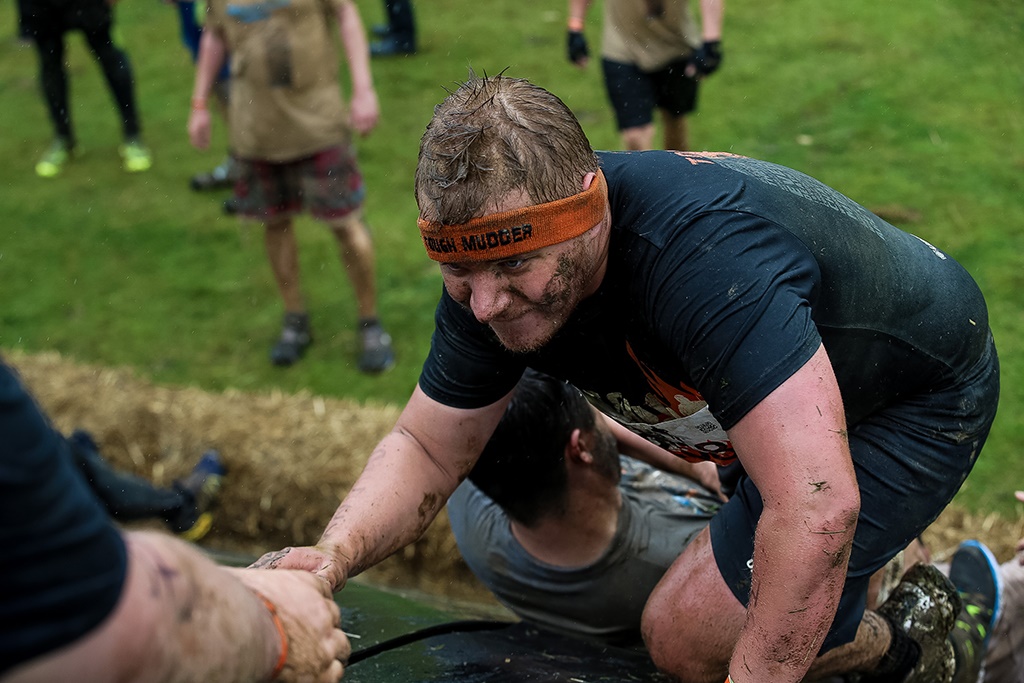 Obstacles come in every variety you can imagine, but the name of the event implies mud, and Kombol tries to always keep that in the back of his mind. One of the team’s most successful executions of this goal is an obstacle called Mud Mile, which is more or less a 200-yard series of mud mounds and trenches that involves immense amounts of slipping and sliding. “It’s pretty much designed so that you’re going to get completely immersed in mud at some point because you’re coming head-first into a mud pit, almost like a penguin,” Kombol explained.

Once participants go through one of these messy obstacles, they can expect to carry around an extra 10 pounds in pure mud. It adds to the physical challenge that people have come to expect from the events.

5. Know when to throw in the towel 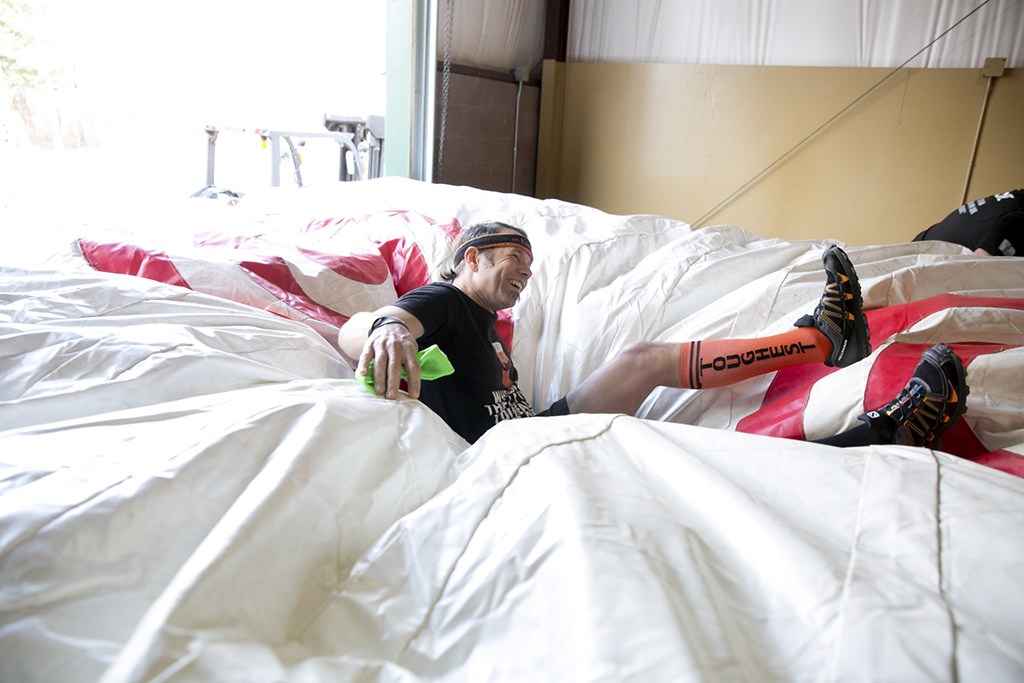 Because the team tests out a few different obstacles to fit each menu category ever year, some don’t end up making the final cut. Sometimes it’s simply because one obstacle was better, but other times it’s more of an execution issue.

Kombol elaborated on one that just wound up involving too much maintenance and frustration for participants. “We had one a while back called Slippery When Wet, which was basically meant to be like an ice rink on slight angle, angled up,” he said. The massive platform was greased with a hefty amount of oil, making it absurdly slick. “We ran into issues in terms of keeping sufficient lubrication on the surface,” he said with a laugh.

The other issue was in actually getting across the platform because just one person could derail things. “It was pretty funny to watch, but people were getting really frustrated with the fact they just spent about 15 minutes to gain 10 feet, then somebody would slide into them and cause them to slide back down.” He has no regrets, though. “That’s part of the job,” Kombol said. “We have to dream big, test, and see what happens.”