ADHD is typically associated with overactive children who can’t seem to quit bouncing off the walls, but it affects more than just kids. It’s not uncommon for ADHD to be misdiagnosed, or even ignored altogether in adults as some symptoms may be attributed to other common issues such as stress at work.

According to the CDC, ADHD presents itself in one of three ways: predominantly inattentive, hyperactive/impulsive, or combined. Here are 10 signs you could have adult ADHD.

Struggling to pay attention at work is a sign of adult ADHD. | iStock.com

Many people find it difficult to concentrate every now and again, but if you constantly struggle with remaining attentive, you may have ADHD. It’s not surprising that a continual lack of focus, a disregard for details, and an inability to follow through with projects or tasks will all negatively impact your life. From daily responsibilities at work to expectations within personal relationships, ADHD, when undiagnosed, often puts strain on several areas of a person’s life.

Adults with ADHD may be highly unorganized. | iStock.com

Misplacing your car keys is one thing, but constantly losing items, both menial and important, is beyond irritating. In addition to being an inconvenient and frustrating annoyance, forgetting details of where you’ve left something could be a sign that you have predominantly inattentive ADHD, according to The National Resource on ADHD.

Can you only focus on one thing at a time? | iStock.com/gpointstudio

It may sound counter-intuitive that a person with ADHD would be hyper-focused, but this can sometimes be the case. What makes this type of heightened focus negative, though, is that someone can become so engrossed in one thing, they totally ignore everything else around them. As mentioned in a Healthline article, being so focused can make it easy to lose track of time, ignore people around you, and cause relationship misunderstandings.

Not being able to keep still could be a sign of adult ADHD. | iStock.com

If a person has hyperactive/impulsive ADHD, it’s likely they won’t be able to sit still for long periods of time. Tapping hands or feet, squirming while seated, and moving around at inappropriate times are all common. As the APA says, it’s typical to struggle with quietly completing leisurely tasks or activities, and someone with ADHD may constantly feel as though they’re on the go. 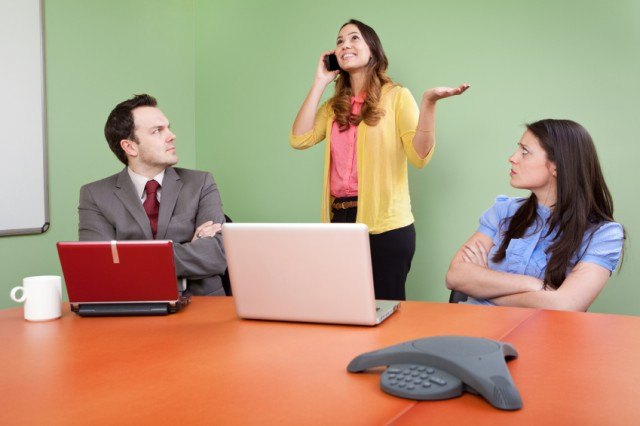 Do you find it hard to wait your turn? | iStock.com

No one appreciates someone who can’t seem to keep their mouth shut, but a person with ADHD may find it difficult to wait their turn. According to The National Resource on ADHD, blurting out in the middle of a conversation, or at an inappropriate time, is a sign of ADHD. Most adults are able to pick up on social cues, but for some people with ADHD, recognizing and abiding by social norms can be beyond their grasp.

Following instructions is one of your least favorite things to do. | iStock.com

As part of an inability to pay attention, it’s quite possible a person with ADHD will miss or ignore even the most basic of instructions. According to the CDC, a person may fail in their duties at work because of this. Following through is important, so easily getting sidetracked can definitely throw a person off his or her game.

Just going through the motions is more of your thing. | iStock.com

By the time you’re an adult, you know doing things you don’t want to do is just part of life. While it may be normal for kids to avoid doing their homework, adults have to realize some aspect of their professional life requires critical thinking. Do you absolutely dread tasks that call for lots of mental effort over a long period of time? Well, if you consider this a huge burden, you may have adult ADHD.

8. Difficulty listening when spoken to

If you constantly daydream while others are speaking you may have ADHD. | iStock.com/Poike

According to the APA, people with ADHD sometimes seem to be elsewhere, even when someone’s speaking to them. Whether they’re daydreaming or just aren’t fully digesting what the conversation is about, it’s a red flag. Obviously, this could be a problem in terms of following through with tasks. Are you really just ignoring instructions, or did you miss them altogether? This can also lead to trouble with romantic relationship, because your partner may think you’re intentionally ignoring them.

No job has been able to satisfy you quite just yet. | iStock.com

A person with ADHD who has yet to be diagnosed may have a history of bouncing around from one job to another. This is not to be confused, however, with someone who’s simply continued to move up in their career. According to The National Resource on ADHD, an adult with ADHD may experience inconsistent work performance or find themselves either quitting or losing jobs on a regular basis. An adult who’s struggled to hold down a job without good reason to explain it may want to reach out to a professional.

The signs may have been around since you were a child. | iStock.com

Even if a person isn’t diagnosed until later in life, ADHD cannot all of a sudden develop during adulthood — symptoms need to have been present during childhood. To be specific, the CDC says they must have existed by age 12. That doesn’t mean an individual had to have recognized them while they were a child, but it definitely requires some reflection to determine whether or not an ADHD diagnosis is feasible.

This is not an exhaustive list of symptoms of adult ADHD, so it’s important to seek medical help if you suspect you may have the condition.