Anthony Bourdain wasn’t your average foodie. He traveled the world showing viewers different cuisine, shared his less-than-lucky past, and was totally candid with his life experiences along the way. Over time, his fans couldn’t get enough of his stories.

His down-to-earth approach and world travel captivated all of Bourdain’s viewers, and he certainly won’t be forgotten. The New York Times reports Bourdain was found in his hotel room unresponsive on June 8, and no foul play is suspected.

Bourdain was traveling to France to film an episode of Parts Unknown, his show hosted on CNN. Now, many close to the star are expressing their sadness over the news. “One of the great storytellers of our time who connected with so many. I wish him peace,” said celebrity chef Eric Ripert.

Next: This is just one of the reasons everyone loved Bourdain.

2. He came from humble beginnings, which is why everyone loved him

The New York Times notes Bourdain started as a line cook working 13-hour days in New York. After several years of climbing his way to being an executive chef, he sent an article to The New Yorker about what the city’s restaurant life was really like. And that’s when it all took off.

Since then, anyone who loves a good story is familiar with at least a few of Bourdain’s antics. Even Obama wrote on Twitter, “He taught us about food — but more importantly, about its ability to bring us together.”

Next: Bourdain came from a troubled past that we can’t even imagine.

3. From debt to addiction, Bourdain never kept his dark past a secret 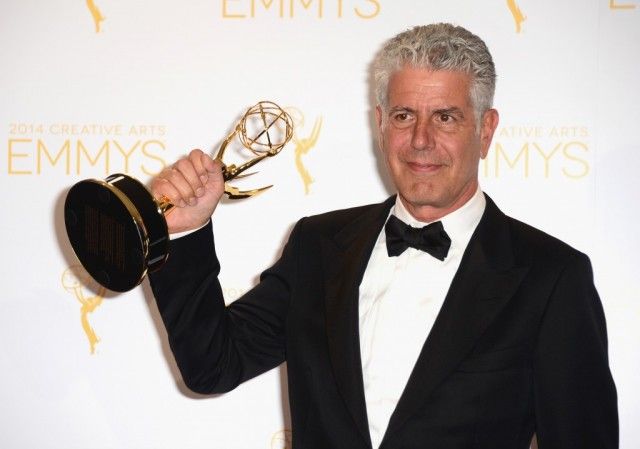 Life wasn’t easy for Bourdain. And he didn’t see success until he was in his mid-40s. As he told Biography, “I was in horrible, endless, irrevocable debt. I had no health insurance. I didn’t pay my taxes. I couldn’t pay my rent. It was a nightmare.”

Bourdain’s also spoken candidly about his addiction to heroin in the ’80s. As for him and his friends who lived through that dark period of their lives, he said, “we’re the lucky ones. We made it out alive. There are a lot of guys that didn’t get that far.”

Next: Bourdain’s life really took a turn when he met Ottavia Busia.

4. The restaurant business brought Bourdain and Ottavia Busia, his ex-wife, together

Busia was once married to the chef. | Frederick M. Brown /Getty Images

Bourdain was married twice. He wed Nancy Putkoski in 1985 and sustained a 20-year marriage. But things were different with his second wife, Ottavia Busia. Though the two eventually divorced in 2016 after nine years, he connected heavily with Busia thanks to their involvement with the restaurant business, Newsweek reports.

There’s another thing, too, that brought Busia and Bourdain close. And that was the birth of their daughter, Ariane.

Next: This is the one thing that changed Bourdain’s life completely.

5. He said his daughter was 1 of the things that brought him peace

Bourdain wasn’t 50 until he had his daughter with Busia, People reports. And in one of his final interviews with the publication, how his daughter actually gave him something to live for.

In February 2018, he told People that he felt responsible to “at least try to live” now that he had a child he was raising. And Ariane made him rethink some of his “daredevil” moves he would try before, for he now had a whole new set of promises to uphold.

Next: Ariane shifted Bourdain’s way of thinking in more ways than one.

Not only did Ariane breathe new life into Bourdain, but it made him want to totally clean up his bad-boy ways. In his February interview with People, he said prior to Ariane’s arrival, he would “go to places,” and it was clearly “asking for trouble.” He also said he’d take big risks by telling himself, “I’ve had a good run — why not just do this stupid thing, this selfish thing … jump off a cliff into water of indeterminate depth.”

He mentioned that thanks to his daughter, which brought him a reasonable level of happiness, he didn’t know if he would take those risks ever again.

Next: Here’s another thing that brought Bourdain joy.

7. He alluded that his girlfriend, Asia Argento, made him happier than ever

In his interview with People, Bourdain didn’t say his girlfriend’s name — but we knew exactly who he was talking about. He described himself as being “happy in ways I didn’t think I ever would be, for sure.” And he said that happiness was due to “somebody really strong,” who we now know is Asia Argento.

Fox News reminds us you may remember Argento for being one of the many women to accuse Harvey Weinstein of sexual assault. Bourdain was an avid supporter of the #MeToo movement, which brought them even closer together.

Next: Argento’s statement regarding Bourdain’s death

On Twitter, Argento posted, “Anthony gave all of himself in everything that he did. … He was my love, my rock, my protector. I am beyond devastated.”

Argento and Bourdain confirmed their relationship in February 2017, Fox News reports. Argento was working on an episode of Parts Unknown when the two really hit it off. Those close to the couple have been reaching out to Argento to support her during this time, and she requests privacy for herself and Bourdain’s family.