Attention Daughters-In-Law: This Is the 1 Mistake You’re Making

After you get married, you probably feel the need to prove you’re the perfect daughter-in-law. Even if you start out getting along with your new family, there’s an innate desire to impress your in-laws with how great of a wife you are. However, the more you try, the more it may seem like you’re getting judged or put down.

It’s easy to blame your in-laws for their behavior, which oftentimes leads to feeling like you just can’t connect with them. If this is the case, it’s probably time to self-reflect, and realize that it may be you who is to blame for the strained relationship.

These are common mistakes you’re probably making as a daughter-in-law, including the one thing that you need to fix if you want to get along with your spouse’s family. 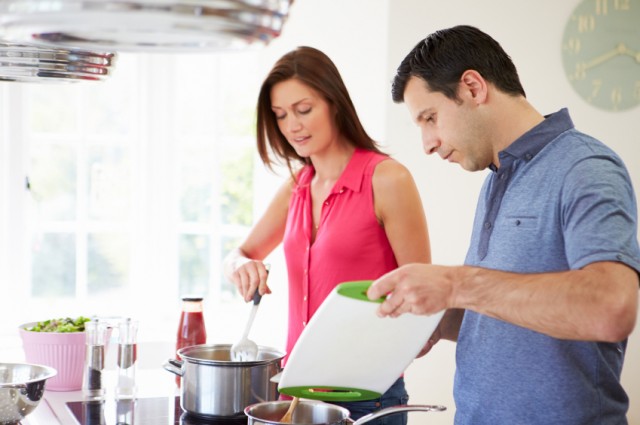 If you can’t help but be a bit wary about how you’ll connect with your in-laws, don’t read into every little thing they say. You may feel sensitive about anything that might come across as criticism, which means you’re bound to get hurt. Just because your mother-in-law wants to share her secret ingredient with you, it doesn’t mean she hates your cooking. She probably sees sharing her advice as a way to bond, but if you take it as an insult, you’ll hinder the opportunity to have a close relationship.

2. Seeing your differences as faults

Don’t look at differences as a bad thing. | iStock.com/SIphotography

Different people are going to have different views. When it comes to your in-laws, it’s easy to view those differences as faults in your relationship. Take into consideration that they lived in a different time and have a lot more experience than you. If your mother-in-law makes recommendations for how she might have done something differently, she’s learned from her own experiences and past mistakes, and is probably only trying to help.

Even if it does feel like they’re constantly trying to push their views onto you, they may be worth listening to. Don’t take it as having nothing in common with your in-laws and like they’re trying to control your life. Embrace your differences, and you can probably learn a thing or two from each other.

3. Being on edge when they’re in your home

It’s not that we’re recommending you leave your house a mess and pick up some take-out instead of cooking, but you shouldn’t let the stress consume you. Your in-laws probably aren’t visiting to pick apart your life. They’re there to spend time with you, so even if you spent hours prepping for them to come over, relax and enjoy their company when they arrive.

4. The No. 1 mistake: Expecting that you’re going to have a bad relationship

The number one mistake you’re making as a daughter-in-law is expecting that you’re going to have a bad relationship. In the movies, there always seems to be a strained relationship between a married woman and her in-laws. How many times can you remember a female character complaining to her spouse about their mother? Too many to count, we’re sure.

You shouldn’t expect this to be the norm once you tie the knot. Go into your marriage realizing that your spouse’s parents are elated that their baby has found someone to spend the rest of their life with. Clear your expectations and get to know your new family with a positive attitude, and you’re likely to connect with them much easier.

5. Complaining to your own parents about them

Do your best to not divide your families. | iStock.com/monkeybusinessimages

You may need to let off some steam, but the last thing you want to do is create a divide between your family and your spouse’s. You are all family now, so if you complain to your parents about your in-laws, you may be creating an “us vs. them” mentality.

Maybe your mother-in-law is loading on the motherly advice a little too heavily, and you need to complain to somebody. One of your close friends may be your best bet. They aren’t part of the family, so they won’t get offended and won’t be too opinionated. While you should be open and honest with your spouse about your feelings, they probably don’t want to be constantly talking badly about their own parents — even if they agree with you.

6. Letting your kids hear you complain about them

Don’t allow your kids to get involved in your drama. | iStock.com/djedzura

In the event that you can’t help but vent about your in-laws, avoid doing so in front of your children at all costs. Visits from grandparents are always exciting for children, so if they start hearing judgmental opinions about them, they might pick up your negative view.

You’re also putting your words getting repeated at risk. Children are great at choosing inopportune times to say whatever’s on their mind, so don’t be surprised if your child voices your complaints that they overheard. Just hope they don’t choose your in-laws as the people they tell.

7. Getting in the way of your spouse’s relationship with their parents

Your spouse should have the freedom to see their parents. | Monkeybusinessimages/iStock/Getty Images

One of those things that wives tend to complain about regarding their in-laws in movies? Spending time with them. You and your spouse might have a very busy life, but that doesn’t mean you should restrict them from getting to see their parents.

You might even want to encourage your spouse to visit their parents every once in awhile. After all, your in-laws probably miss their child like crazy, and it would mean the world to them if you give them some quality time together.

Even if you only get the time to see your in-laws during the holidays, don’t rush your spouse to leave once dinner is over. If you’re welcome to stay a few more hours, take the opportunity. Life is short, and spending that little bit of extra time together will be worth it.