Aubrey O’Day’s Tweet on Election Night Says Everything We Need to Know About Her Relationship With Donald Trump Jr.

Don Jr. and Vanessa Trump are getting divorced — and now, new details are emerging which may explain part of the reason the two are choosing to split. The eldest Trump child allegedly had an affair with singer Aubrey O’Day. And now, we’re fully immersed in the details of what may have been going on behind his wife’s back.

Could Aubrey have given the public clues about the affair in the past? This tweet on election night makes us think so (skip to page 5 for the reveal).

1. Don Jr. met Aubrey during the filming of Celebrity Apprentice

Multiple sources confirm that Don Jr. and Aubrey met each other on the reality series Celebrity Apprentice, Us Weekly notes. At this point in time, Don Jr. had three children with Vanessa, but that didn’t stop him. He reportedly still pursued Aubrey until well into 2012.

Arsenio Hall and Clay Aiken, who also appeared on that season of Celebrity Apprentice, took to Twitter to add in their opinions. Arsenio’s tweet said their season was great reality TV, but him and Clay “both used to say that the GREATER show was going on behind the scenes.”

2. He even told Aubrey his relationship with his wife was headed for divorce

Aubrey may have been waiting for him to divorce Vanessa. | Chelsea Guglielmino/Getty Images

It seems Don Jr. really pursued Aubrey, and he even told her his marriage would end in divorce anyway. As one source told Us Weekly, “Don would talk to Aubrey about how he was miserable in his marriage and how Vanessa was so controlling and paranoid about him leaving.”

On top of all that, Page Six notes the two would rendezvous to various cities during their year-long affair. And they would also write each other love notes.

Next: This is what Donald Trump had to say about the fling.

3. Don Jr. may have been pressured to stay in his marriage by his father

He might have been heavily influenced by his father. | Saul Loeb-Pool/Getty Images

According to one source, Donald Trump knew his son was having an affair during Celebrity Apprentice, Us Weekly reports. And the source mentions that Trump Sr. urged Don Jr. to stop seeing Aubrey. According to the source, Don Jr. then told Aubrey his father thought it would look bad if he left his wife for another woman.

Page Six notes others in the family may have pressured Don Jr. to stay in his marriage and leave Aubrey behind as well, so we’re curious as to who else may have known about the affair.

Next: This is how Aubrey really felt about Don Jr.

Aubrey might have been waiting for a permanent commitment.  | Charley Gallay/Getty Images for Life & Style Weekly

It seems for Aubrey, the affair wasn’t just a fling after all. An insider who knows Aubrey well told Us Weekly that she “fell for him hard. She thought they were going to be together for real.”

In 2012, after the affair was over, Aubrey spoke about her love life — and what she said really makes sense to us now. She said she liked “strong men that usually have big egos” who feel “powerful and more in control.” Then, she also said those types of men can do whatever they want — and they “don’t always play fair.”

Next: Here’s the tweet she sent on election night that we all should have paid more attention to.

5. And she sent this questionable tweet out on election night 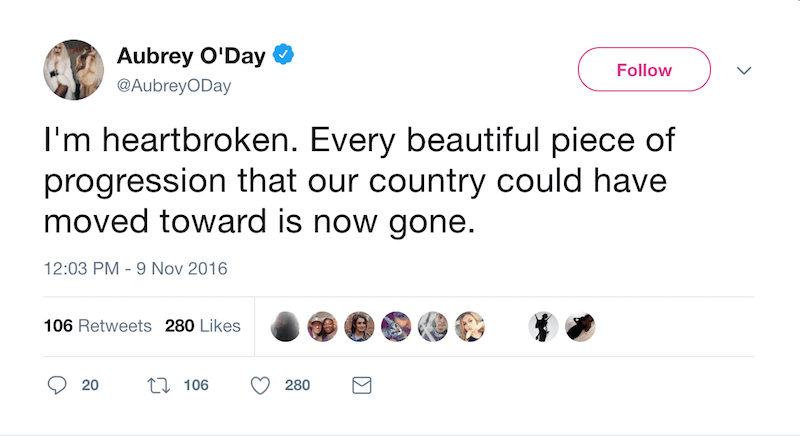 Though Aubrey was on Trump’s Celebrity Apprentice, she claimed on social media that she was “heartbroken” by the election results. She’s spoken before about the sexism she experienced on the show. And Us Weekly reports she tweeted that “you can be a lying, abusive piece of trash” and still “run our country.”

That’s not all she alluded to, however. After the election, she also tweeted, “My story I didn’t tell is worth millions now,” with a winking smiley face at the end. We’re thinking she’s talking about her relationship with Don Jr.

Next: Vanessa found out about the affair, and this is how she responded.

According to Us Weekly, Vanessa found a wealth of email exchanges between Aubrey and Don Jr. that clearly gave away the affair. And one source claims Vanessa then decided to call Aubrey with her kids on the phone. She allegedly wanted to make Aubrey feel too ashamed to go back to Don Jr. “Vanessa went crazy and was super jealous,” said another insider.

It seems like her tactic may have worked, as Vanessa kept her marriage together for several more years and chose to have two more children with Don Jr.

Next: But that wasn’t Don Jr.’s only alleged extra-marital relationship …

7. Don Jr. also sent strange direct messages to a model after she posted a joke on Twitter She shared this shocking message. | Melissa Stetten via Twitter

The Cut explains model Melissa Stetten found Don Jr.’s strange Twitter messages that came into her direct messages in 2011 and released them back into the public eye. Melissa wrote, “I tweeted a joke about pulling a muscle changing a tampon and he replied asking if I smelled bacon? Cool joke.”

According to one of Don Jr.’s messages to her after the initial bacon one, he wrote, “glad I opted not 2send the tweet asking 4pics from ur bathroom tweet last night;).”

Next: Their marriage may have been doomed even before Don Jr. met Aubrey or Melissa.

8. Many aren’t surprised by the couple choosing to divorce

Since news of their divorce broke, Vanessa and Don Jr. have kept a low profile. The New York Times reports they issued a joint statement saying they still have “tremendous respect for each other” and they want to do what’s best for their five children. That seems amicable enough — though some sources say they saw this divorce coming years ago.

One insider told Page Six, “I think his marriage to Vanessa was over long before Aubrey came along.” And considering Don Jr. has also had a few racy exchanges on Twitter with a model in the past, perhaps none of this should come as any surprise at all.

Next: Could this be why they’re splitting?

9. No one expected the couple to have such a large family

They have quite a large family. | Mandel Ngan/AFP/Getty Images

It was just a year after their marriage when Vanessa got pregnant with the couple’s first child. And while many of Donald Trump’s kids have children of their own, it’s Don Jr. and Vanessa who have the most. They have five children total, Bustle reports.

While Don Jr. typically keeps his kids out of the headlines, they’re no stranger to his social media. He frequently shares photos of his large family smiling together on Instagram — though lately, Vanessa hasn’t been featured.

Next: Here’s one of the reasons as to why their relationship failed.

Are they thinking of going their separate ways? | Larry Busacca/Getty Images

Page Six reports there’s one big issue that’s come between the couple — and that’s Don Jr.’s ridiculously busy schedule. He’s already traveled to multiple countries, and we never see photos of him with Vanessa or the kids in any of them. One source says “the couple had hoped to stay together during the president’s time in office, but it is getting harder to resolve their issues. He’s never there.”

Another source claims Vanessa’s been extremely lonely by herself while Don Jr.’s away, which certainly isn’t helping things.

Next: Where does Don Jr. go when he’s away?

11. And his ventures outside the home aren’t just for business, either

Perhaps she was disappointed in him. | Timothy A. Clary/AFP/Getty Images

Don Jr. certainly travels for business — but that’s not all. Before his father even won the presidential election, Don Jr. had a love of hunting big game, Yahoo notes. But after a photo surfaced of him and his younger brother Eric holding up a dead leopard, and then another of Don Jr. holding a severed elephant’s tail, all eyes were on them.

Instead of issuing any sort of apologetic statement, the brothers defended the photo. And the public outcry most likely caused some serious discomfort for Vanessa.

Next: Even Don Jr.’s friends are concerned.

12. Friends also say Don Jr. has ‘changed’ — and not for the better

Some of his actions on social media are concerning. | John Moore/Getty Images

Don Jr. hasn’t always had a squeaky-clean image. Yahoo recalls his reputation for womanizing and partying prior to 2003 was hard for him to shake. Once he met Vanessa, however, he really seemed to change for the better — until recently.

Two sources tell Page Six that Don Jr. “appears to have changed recently.” These concerns came after the Trump liked a few worrying tweets, such as one linking antidepressants to mass murder, and another claiming school shooting survivors were lying about the events.

Next: Here’s how Don Jr. feels about all the new attention coming his way.

13. And he reportedly likes being in the public eye

He enjoys following in his father’s footsteps. | Joe Raedle/Getty Images

All in all, it seems Don Jr. likes living in the spotlight. Vanity Fair explains there’s one friend of Don Jr.’s who’s not concerned at all about his behavior. In fact, this friend says he’s just “bold and aggressive” by nature, and he’s always been that way.

“There’s nothing irrational about him. He’s always been bold, will say what he thinks, and fight back,” says the friend. Perhaps Vanessa then knew this side of her husband all along.

Next: Vanessa feels very differently about being a famous Trump.

14. Vanessa hates being thrust into the spotlight

A good reason for her to want to leave. | Stephen Lovekin/Getty Images

She may have been OK with a little media attention here and there, but now, it seems Vanessa’s in too deep. One source told Page Six that Vanessa is naturally quite low-key, and she’s completely uncomfortable with the media’s attention on her, her husband, and her kids.

This feeling was amplified after she received a mysterious white powder in the mail, too. The New York Post explains someone sent a threatening letter containing the powder to Don Jr., but Vanessa opened it. She was rushed to the hospital, though the powder turned out to be harmless. Even so, it gave her quite a scare.

Next: Here’s what people think will happen next.

15. Vanessa’s divorce filing says it all

We’ll have to wait and see. | John Moore/Getty Images

There’s no doubt the couple have been having issues for quite some time. And the couple issued a joint statement stating they’ve decided to go their separate ways, according to The New York Times.

Not everyone thought they were doomed, however. One source told Page Six that the couple wasn’t yet at the stage of giving up on their marriage completely, and they were dealing with the matter privately. Even through their divorce, Don Jr. and Vanessa say they still have respect for each other, and their children are their top priority.