Before Karl Cook: A Look Back at Kaley Cuoco’s Love Life

Kaley Cuoco can’t get enough of her now husband, Karl Cook. Fate led the two together, as the actress and equestrian crossed paths at a horse show back in 2016 — and they haven’t looked back since.

On June 30, 2018, Cuoco and Cook officially tied the knot. She may now be blissfully wed, but it took Cuoco a long time to get to where she is now. Here’s every man that’s been a part of Cuoco’s love life, up until marrying the man of her dreams.

Then, in 2003, Cuoco was tied to actor Kevin Zegers. According to PopSugar, the two met in 2003 while co-starring in The Hollow. Cuoco and Zegers stayed together for a year, but they just weren’t meant to be. Zegers ended up marrying Jaime Feld in 2013, and they since had two twin girls together.

Between 2005 and 2006, Cuoco dated musician Jaron Lowenstein. He’s one half of the musical group, Evan and Jaron. The other half, Evan Lowenstein, is his identical twin brother.

Cuoco’s romance with actor Al Santos in 2007 was short and sweet. He’s had roles in CSI: NY and Speed Demons (2012), and is set to star in the TV series, TaskForce: Back in Black. 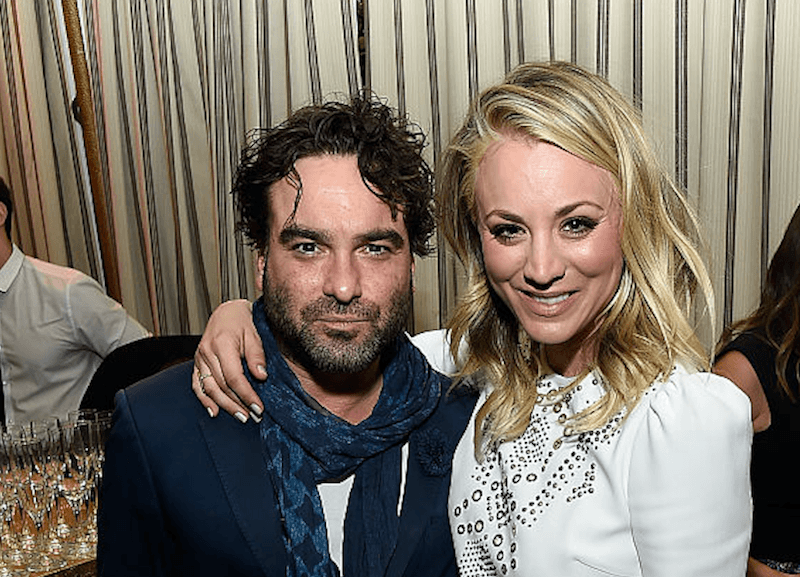 No one knew it at the time, but Cuoco dated her Big Bang Theory co-star, Johnny Galecki, from 2008 to 2010. They only opened up about their relationship after the fact, and they’ve since remained the best of friends.

Cuoco told CBS Watch, “It was such a huge part of my life and no one knew about it,” she said. “It was a wonderful relationship, but we never spoke a word about it and never went anywhere together.”

Cuoco moved on to musician Christopher French after her secret relationship with Galecki. According to PopSugar, “The couple dated from 2011 to 2012 and even recorded a duet of ‘Somewhere Over the Rainbow’ to benefit the Human Society.”

Once they went their separate ways, French began dating Ashley Tisdale in December 2012, who he then married in 2014.

Cuoco had plans to marry addiction specialist Josh “Lazie” Resnik back in 2011. They got engaged in October of that years, but it only lasted for five months. People reported at the time, “The surprise proposal took place during a quiet date night at home.”

Cuoco’s rep spilled, “The couple are very happy and excited to begin planning their wedding.”

It didn’t take too long for Cuoco to bounce back after her broken engagement. In 2012, she began dating Bret Bollinger. However, they only ended up lasting until January 2013.

Cuoco and British actor Henry Cavill only dated for 12 days back in July 2013. They were only spotted out together once on a shopping trip, but it was enough to grab headlines. After all, it was right around the time Cavill first portrayed Clark Kent in Man of Steel (2013), so it was definitely a relationship to watch — if only for a few weeks.

When Cuoco started dating tennis player Ryan Sweeting, she fell hard and fast. It only took three months of dating for the two to get engaged. Then, after three months of engagement, they tied the knot on Dec. 31, 2013 in a secret ceremony.

In September 2015, however, they announced that their marriage was over. A source told People, “It seemed they were trying to work out their marriage by going on dates, but they both seemed miserable.”

Cuoco and Arrow star Paul Blackthorne were reportedly dating in December 2015. They were never seen together, but a source spilled some details to Us Weekly at the time: “It’s new, but she’s really excited about it.”

Finally, Cuoco has found happiness with her husband, Karl Cook. Romance rumors began swirling in March 2016, when they each began sharing photos of each other on Instagram.

In a September interview of the same year, Cuoco couldn’t help but gush about her man. “I’m so happy. I can’t stop smiling,” she told The Talk. “Life is so so good. We met at a horse show. I finally found my horse guy. It was very meant to be.”

When they got engaged in August 2017, they each shared the moment on Instagram. Cuoco posted a video of herself crying just after the proposal, and wrote, “Still crying,” with a diamond ring emoji. “Every part of this night has been perfection just like you @mrtankcook I love you forever!”