Foodborne illness outbreaks, sometimes the result of nationwide food recalls, affect hundreds to thousands of people every year. Many people get sick without knowing they’ve eaten contaminated food, which makes severe illness and death much more likely. This is a much more common occurrence than you might think. Recalls, and the widespread infections that prompt them, occur hundreds of times each year.

How do foodborne illness outbreaks happen?

It’s sometimes hard to pinpoint exactly when a food product first came into contact with disease-causing bacteria. This can happen at pretty much any point in the process, from the farm to your kitchen. That’s why so many contaminated foods cause disease outbreaks — sometimes fatal ones — before officials can figure out what’s causing them. Let’s look at some of the worst cases in history.

Next: This outbreak spread across 46 U.S. states.

In 2009, the CDC reported over 700 salmonella infections in 46 of all 50 U.S. states. A total of nine people died as a result of the illness. Officials later blamed King Nut creamy peanut butter, produced in a Peanut Corporation of America facility in Texas, for the widespread outbreak. Approximately 3,600 peanut butter products were recalled to prevent further infection.

Next: Cows cause the majority of E. coli sickness in the U.S.

Something so healthy can also make you sick. | iStock.com/dionisvero

In 2006, Dole recalled its bagged spinach after an E. coli outbreak made over 200 people sick. A total of 31 people suffered kidney failure as a result of bacterial infections, and three people died. Officials think that a cattle ranch’s close proximity to farmland growing the spinach led to the outbreak.

Next: Over a dozen people died as a result of this tragic, deadly outbreak.

One of the worst listeria outbreaks came from hot dogs. | TanyaSid/Getty Images

A Michigan packaging facility began one of the deadliest listeria outbreaks on record. Tainted meat containing listeria sickened 100 people and caused 14 adult deaths and several miscarriages in 1998. This listeria outbreak impacted around a dozen brands, including Sara Lee Deli Meat.

Next: Most foodborne illness outbreaks involve bacteria — but not this one.

Queso may give you more than you bargained for. | iStock.com

The majority of foodborne illness outbreak in the U.S. involve bacteria like listeria or salmonella. In 2003, however, a viral hepatitis A emerged after hundreds of people consumed contaminated Chi-Chi’s salsa and chili corn queso. Three people died, and more than 500 fell sick.

Next: Millions of pounds of turkey could have made people seriously ill.

Stay up to date on recalled items. | iStock.com/MikeyGen73

Fast food chain Jack in the Box almost went under after hamburger meat contaminated with E. coli the change to food safety and sanitation guidelines killed four and sickened hundreds. The only good thing to come from this beefy disaster was the government made in response. They basically made it illegal to process ground beef containing harmful bacteria.

Next: There’s a reason pregnant women are told not to consume unpasteurized dairy.

A lot of lives were changed over contaminated cheese. | iStock.com/Anna_Kurz

Unpasteurized milk, used to make Mexican-style cheese products, led to one of the most deadly listeria outbreaks in U.S. history. A total of 142 people in Los Angeles County became ill, and 28 people — 10 of them newborn infants — died. This also caused a number of miscarriages.

Over 200 people were hospitalized over a salmonella outbreak. | iStock.com

Andrew & Williamson Fresh Produce issued two recalls in 2015 after cucumbers containing salmonella were imported from Mexico. Over 900 people across 40 states developed illness from the outbreak. More than 200 people were hospitalized, and six died.

Next: Fruit is usually good for you. These cantaloupes should have never left the factory.

A Jensen Farms packaging facility in Colorado distributed listeria-contaminated cantaloupes that infected over 100 people. A total of 33 people died from the outbreak. The illness impacted people in 28 of 50 states.

Next: Most outbreaks occur after contamination at packaging facilities. Not this one.

Sometimes outbreaks occur over the way something was prepared. | iStock.com

A single batch of homemade potato salad, served at a church picnic in Ohio, led to the biggest botulism outbreak of the 21st century. According to the CDC, 29 people who ate the potato salad got sick, and one person died of complications related to respiratory failure. Better food preparation could have prevented the outbreak.

Next: What makes food poisoning so dangerous, even if it isn’t always lethal?

Why are foodborne illnesses so dangerous?

Next: Which foodborne illness are you most likely to have in your lifetime?

What are the most common foodborne illnesses in the U.S.? 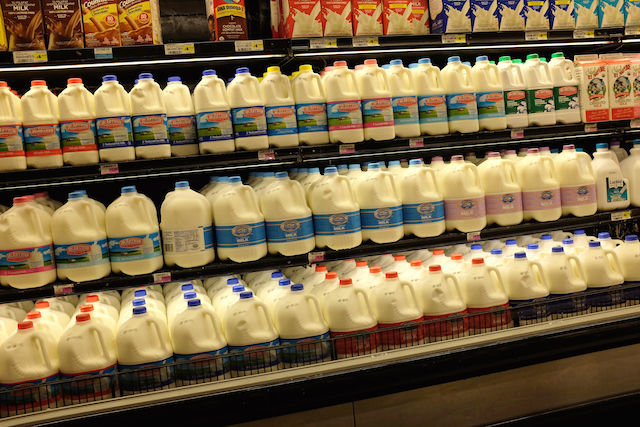 There are over 250 types of foodborne illnesses. | Joe Raedle/Getty Images

As the deadliest cases of widespread food poisoning show us, infections involving listeria, salmonella, and E. coli bacteria impact consumers the most. According to the CDC, experts have identified over 250 foodborne illnesses total. If you consume food, you’re always technically at risk of infection — but your risk of dying isn’t enough to seriously worry.

Next: Here’s how you can tell if you have food poisoning.

How to know if you have food poisoning

There are a number of ways to tell if you have food poisoning. | iStock.com/vadimguzhva

According to Mayo Clinic, symptoms of food poisoning include nausea and/or vomiting, abdominal pain or cramping, fever, and diarrhea. Severe illness can lead to dehydration and other complications, so it’s important to see a doctor if you begin experiencing symptoms of dehydration or have diarrhea for more than three consecutive days.

Next: There are a few things you can do to prevent getting sick from contaminated food.

How to prevent eating contaminated food

Something as simple as washing your hands can help protect you against food poisoning. | iStock.com

Don’t want to get sick after eating bacteria-contaminated food? The Centers for Disease Control and Prevention recommends practicing proper food safety when preparing food at home. Cook and chill food for the specified temperatures and times, avoid cross-contamination by separating raw and cooked foods, and — most importantly — wash your hands!