It’s hard to keep up with the carb craze these days. One minute we’re being told to cut back on carbs if we want to lose wight, the next we’re informed that they are not the enemy. The truth is that carbohydrates give us energy, and choosing the right snacks can fuel your body and help you burn more calories in the long run.

First, let’s clear up the common misconceptions around carbohydrates. While diets like Atkins and Paleo have led us to believe that they’re detrimental to any weight loss plan, the truth is that every cell in the body uses carbohydrates for energy. And we’ve been using carbs as fuel for ages: Despite what you may have heard about our early ancestors not eating starches, the fact is, starch grains have been found in Neanderthals’ skeletal teeth from 44,000 years ago.

Still, you know you won’t lose weight by eating chips and white rice. Here are the carb-containing healthy snacks you should focus on for energy.

Barley may be able to help you lose weight. | iStock.com

Barley is an ancient grain, and although it isn’t “trendy,” it just might be the key to controlling cravings. Researchers from Lund University in Sweden found that adding barley to the diet may help people lose weight. When the researchers examined the study participants’ blood, they found that those who ate barley bread had a boost in their metabolism for up to 14 hours, decreased blood sugar and insulin levels, and better appetite control than their white bread-eating counterparts. 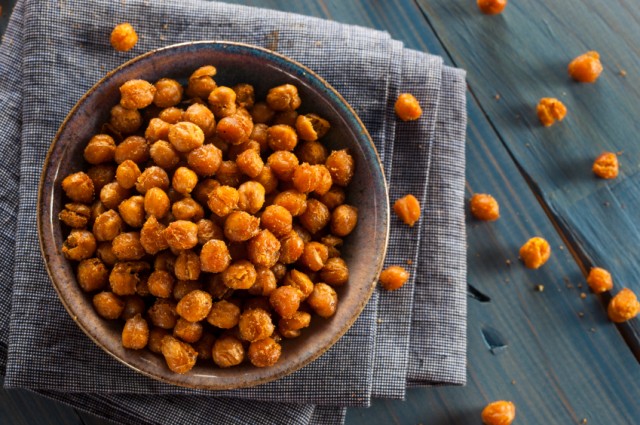 Chickpeas are full of nutrients. | iStock.com

Chickpeas have long been considered a health food, even though they’re fairly high in carbs. Since they’re packed wit protein, fiber, B vitamins and plenty of minerals, they’re a favorite plant-based protein source for vegetarians. Spicy roasted chickpeas are easy to make and make a perfect go-to snack.

A lot of people don’t realize how healthy popcorn can be. | iStock.com/bhofack2

Every handful of popcorn is packed with whole grains and fiber, leaving you feeling satisfied faster and longer than with other snacks. To keep it healthy, season it with coconut oil, and skip the microwave kind entirely.

Sweet potatoes get a bad reputation since one has about 27 grams of carbs. But they’ve also been shown to increase the levels of a blood sugar-regulating hormone called adiponectin, and they also have fewer calories and less fat than white potatoes.

There’s nothing wrong with getting a hefty helping of peas. | iStock.com/SherSor

You may have heard to steer clear of peas if you want to lose weight, but they’re actually beneficial in your diet. One half cup delivers about four grams of protein and fiber (each), and at only 67 calories per cup, you can be generous when adding them to your recipes.

While it’s true that white rice has been stripped of most of its nutritional value, brown rice is full of fiber and magnesium. Plus, it’s low in density, meaning it can make you full faster and you’ll consume fewer calories.

Another myth is that you have to give up fruit to lose weight. A single pear has six grams of fiber, which is more than most fruits. And a study in Annals of Internal Medicine showed that adults who eat 30 grams of fiber per day will lose weight over the course of a year without making any other dietary changes.