Craig Sager has a serious legacy amongst sports fans. Not only is he known as a sport’s reporter who was amazingly good at his job, but there are plenty of tales showcasing his kindness as well. It’s no wonder we all mourned when he lost his battle with leukemia in 2016.

Now that his kids have seen his will, it’s opened a whole new can of worms. Certain members of the family were left out completely of his inheritance — and they’ve taken to social media to reveal the Sager family drama we never knew existed.

He’s known for his personality, clothing, and excellent reporting over anything else. The Chicago Sun-Times reports sports fans and players alike shared an outpouring of condolences for the family when Craig Sager passed. Coach Fred Hoiberg says Craig courageously fought his cancer battle, especially when it came to having three bone marrow transplants. Hoiberg also mentions, “I know it takes a strong support system with the family, and having that by his side the entire time.”

It seems his family is a lot more divided than Hoiberg thought, however.

His kids were completely left out of the will

His children have spoken out. | Craig Sager II via Twitter

Though there were no reports of estrangement, Yahoo Sports reports Craig Sager chose to keep all five of his children out of his will. Sager had three children, Kacy, Krista, and Craig Jr., with his first wife, Lisa. With his second wife, Stacy, he had two other kids.

Thanks to Craig Sager Jr.’s Twitter, it’s now public knowledge that the late Sager seemingly gave Stacy everything. Craig Sager Jr. says he’s being summoned to court over his father’s estate, and he comments on Twitter that he doesn’t want to discuss “a Will that myself and my sisters are not only 100% excluded from but do not even have any interest in contesting in the first place. Thanks Dad.”

Craig Jr. said writing a book with his father brought them closer together

He has plenty of memories with his father. | Craigsagersuitstagram via Instagram

Before Sager’s passing, him and his son, Craig Jr., embarked on writing a book together, TMZ reports. The book, titled Living Out Loud: Sports, Cancer, and the Things Worth Fighting For,” tells an emotional story of the late Sager’s battle with cancer — and his son helped greatly with the writing process.

“It was what I was looking for my entire life with him in terms of a relationship,” Craig Jr. says. In regards to his childhood, he says it was “so hard to get time” with his father growing up, and the book was an opportunity for him to open up to his dad. To the public, this made the news of the will even more surprising. 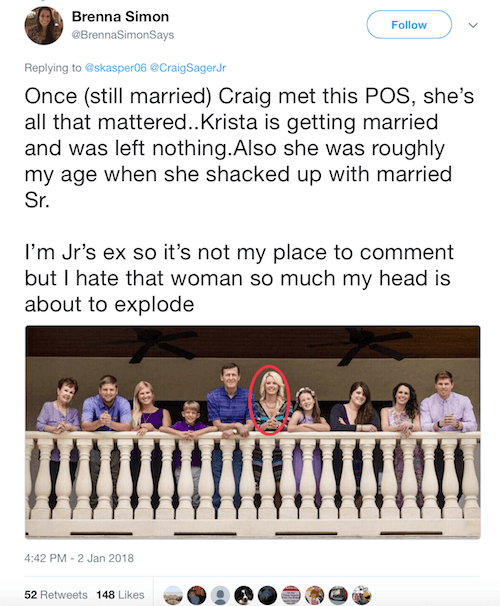 After Craig Jr.’s first tweet regarding the will, his ex-girlfriend, Brenna Simon, chimed into the drama on Twitter as well. Simon says Stacy, Craig’s second wife, is the reason why the kids aren’t in the will. Simon tweeted, “Once (still married) Craig met this POS, she’s all that mattered..Krista is getting married and was left nothing. Also she was roughly my age when she shacked up with married Sr.”

And that’s not all, as Simon continued with, “She’s a soulless home wrecker and deserves to be known for her true colors.”

Another Sager child showed her support for Craig Jr. exposing their father 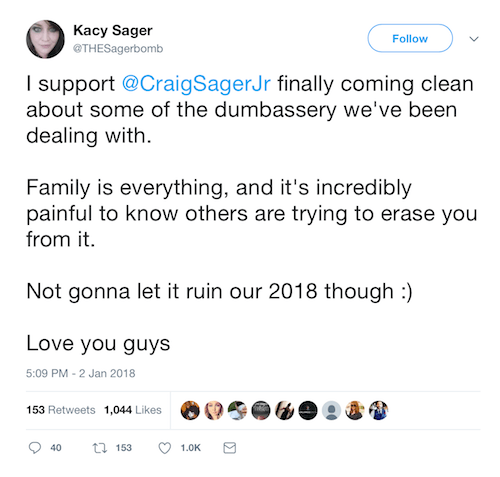 She’s not holding anything back. | Kacy Sager via Twitter

The New York Post reports Brenna Simon received plenty of backlash following her critical tweets. But another Sager, Craig Jr.’s sister Kacy, stated, “nothing she said was inaccurate though.”

Additionally, Kacy Sager tweeted support for Craig’s Jr.’s tweets regarding the will. “I support @CraigSagerJr finally coming clean about some of the dumba**ery we’ve been dealing with,” her tweet reads. “Family is everything, and it’s incredibly painful to know others are trying to erase you from it.”

Kacy’s most recent statement slams Stacy and her father, too

Who is telling the truth here? | Kacy Sager via Twitter

Though Kacy declined an interview with TMZ, she did post a scathing statement criticizing her father and Stacy on Twitter. In the statement, Kacy says Stacy wouldn’t allow her into the house to say goodbye to her father while he was still conscious the day before he passed. She also states Stacy wouldn’t allow Kacy, Craig Jr., and Krista’s mother or any of their side of the family to attend the late Sager’s service.

“We knew he left her everything” Kacy writes. “We knew his original will had been revised to exclude us.”

There is definitely drama in the air. | Kevin Winter/Getty Images

Stacy and Craig Sr. started the Sager Strong Foundation to help raise awareness about blood cancers like leukemia. Now that Craig has passed, however, that leaves Stacy as the president and chief executive officer of the foundation. Sports Illustrated reports according to Kacy, herself, Craig Jr., and Krista have all been banned from working with the foundation in the future.

Kacy tweets that “we have been 100% excluded (thus why you never see us at NBA events honoring it),” and that the foundation’s Twitter has been liking tweets that are critical of her stance.