Dangerous Germs: All the Things You Should Never Touch at the Airport

It’s easy for germs to lurk on airplanes; in the pillows, on the seats, in the bathroom, and more. However, the germs that hang around in the airports themselves can be much worse. Bacteria like E. coli, fecal matter, and many others have been found on almost all surfaces of airports. Here are the germiest places you might encounter during your travels, plus how to avoid picking up harmful bacteria.

That tablet is crawling with bacteria. | encrier/iStock/Getty Images

Flight check-in is unavoidable, and so is the bacteria crawling all over that touch screen. According to New York Post, touching the screen to print a boarding pass can harbor potentially pathogenic bacteria such as MRSA and strep, plus viruses like influenza, which can cause death in those with weak immune systems.

Next: Wear clothes with pockets to avoid picking up bacteria here.

The check-in desk isn’t any better than the tablets. | iStock.com/YakobchukOlena

If you’re asked to sign something at the check-in desk, those pens are flooded with pathogens; always try to bring your own if possible. Also, avoid placing your phone on that check in counter; putting your phone down allows it to pick up all kinds of bacteria. Always wear pants with pockets, or carry a bag to put your belongings in rather than putting them down anywhere.

Next: These are even germier than public restrooms.

Wash your hands after you use one of these. | iStock.com

Although it’s easier to pile all the suitcases on a baggage cart, it’s far germier. ABC News reported that shopping carts hold more bacteria than public restrooms, along with saliva and fecal matter. If that’s the case, airport baggage carts likely aren’t much cleaner, since neither is sanitized often (if ever). It’s best to skip the cart and wheel your bag by its own handle.

Next: Hundreds of millions of people touch these each year.

A lot of people have touched those bins. | Monkeybusinessimages/iStock/Getty Images

Kids love things they can pull on. | iStock.com

Kids love touching things they shouldn’t touch. Most of the time, there are “do not touch” signs near rope queues; plus, low-hanging ropes are accessible to children — two good reasons for germy kids to play with the ropes. Since those ropes are hardly, if ever, cleaned, it’s best to avoid touching them.

Floors in the security line

There are a lot of germs in this one spot. | mariakraynova/iStock/Getty Images

Floors may seem like an obvious place for bacteria, but everyone needs to take their shoes off in the security line, giving bacteria even easier accessibility. Fungi like athlete’s foot often linger on security line floors. Make sure you wear socks to avoid picking up anything harmful.

Next: Use the back of your hand to avoid germs here.

Watch out for the bathroom stalls. | iStock.com/IrKiev

Touching a lock on a bathroom stall door is inevitable, but try your best to lock the door with the back of your hand rather than your fingers. This way, you minimize the transfer of bacteria. For women, place your bag over the hook on the door rather than putting it on the floor. Even though the doors still carry a ton of bacteria, it’s less than the floors.

Next: It’s best to not make direct contact with these. 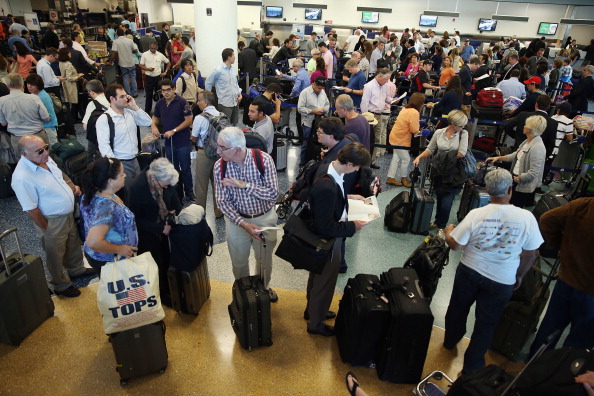 You don’t want to share a toilet with all of these people. | Joe Raedle/Getty Images

Public restrooms harbor tons of pathogens; toilet seats are no exception. To avoid harmful bacteria, always line the seat with toilet paper so your skin doesn’t make contact. You can also avoid touching the seat altogether while you go, if you’re up to it.

Next: Most of these are automatic, but for those that aren’t, beware.

Who knows the last time that sink was thoroughly cleaned. | adavino/iStock/Getty Images

Another part of the bathroom that’s full of germs is the sink. Luckily, most airports have switched to automatic sinks and soap dispensers, but if you’re using one that hasn’t, grab a paper towel and turn the sink on and off with the towel over your hand rather than subjecting yourself to the bacteria on the faucet handles.

Next: Drinking from these is dirtier than drinking toilet water.

Buy a bottle of water instead. | tzam/iStock/Getty Images

If you’re considering taking a quick drink from the water fountain, grab a cup and fill it up with toilet water; it’s cleaner. “You know that toilets are occasionally washed, but I’ve never seen a water fountain sanitized at all,” Dr. Philip Tierno of New York University Medical Center told ABC News. An experiment done by a 13-year-old boy in Oregon showed that public water fountains harvest more bacteria than a toilet.

Next: Watch where you sit.

Seats at the gate area

A lot of people have sat in those seats. | michaeljung/iStock/Getty Images

Any seat in any public place is full of bacteria, and airport seats are no exception. Airport lounge seats were tested and were found to have fecal matter, E. coli and yeast present. They contained more bacteria than the seats on an airline.

Next: You might want to read this before sitting down to eat.

With the amount of people who sit at food court tables, it’s easy for surfaces to be contaminated with tons of pathogens. Plus, people are putting food into their mouths and inevitably transferring bacteria from their own bodies onto to the tables, which likely aren’t cleaned more than once per day. That still gives the opportunity for thousands of people to leave bacteria behind before the tables can be sanitized.

Next: Here are a few ways to avoid all of these germs.

Hand sanitizer is the perfect weapon against airports. | iStock.com/miflippo

Since it’s impractical to carry a bottle of Lysol and spray down everything before you touch it, it’s important to carry antibacterial wipes or hand sanitizer with you wherever you go — especially airports. Although germs are unavoidable, frequently sanitizing your hands is a great way to prevent the spread of bacteria.

Next: No wipes? Your clothes might be the next best thing.

Try to use your sleeve so you don’t pass germs. | iStock.com/Manuel-F-O

If you forgot the wipes, using your sleeve is an option. It prevents the bacteria from getting on your hands, which could then be easily transferred to your mouth or nose. While it’s not the best choice, it’s better than fully exposing your body to potential pathogens.

Next: Sometimes, its best to let the employees handle it.

Ask for help if you need it. | iStock.com

Airport employees are always willing to help out. They’ll take your bags for you, check you in, etc., which not only helps ease your travel burden but also exposes you to fewer germs by having someone else print your boarding pass and take your luggage. If you go this route, you’ll avoid touching some of the germiest places in the airport; just be sure to tip them for their hard work.