The Most Dangerous Over-the-Counter Cold Medications

Most of us are guilty of popping a handful of over-the-counter cold medications without so much as reading the label when we’re feeling congested, achy, or otherwise terrible. Those with kids might do the same in order to help their little ones feel better. Unfortunately, many common cold medications are a lot less safe than you think. Disrupted sleep, dependency, and toxicity are all on the table. In serious cases, common drugs can be fatal. If these cold medications line your bathroom cabinet, you might want to rethink your options.

You probably have some Advil around your house. | iStock.com

Known generically as ibuprofen, this painkiller is one of the most common cold medications people reach for when they’re feeling crummy.

While Advil and similar medications have been generally regarded as safe for quite a while, the FDA took a firmer stance against NSAIDs in 2015 after reviewing data concerning the association between these cold medications and heart disease. Not all studies have come to the same conclusion, but one eye-catching review involving more than 116,000 patients found NSAIDs greatly increase the odds of a cardiovascular event. Ibuprofen in particular was singled out for bearing the highest association with stroke incidence.

Like many cold medications, Tylenol PM relies on acetaminophen to treat headaches, muscle and joint discomfort, and reduce fever. So why single out Tylenol PM specifically? Because it’s designed to aid sleep as well as relieve discomfort, plenty of adults pop a few pills in the absence of a cold simply to drift off to dreamland. The drowse-inducing effect is caused by an antihistamine called diphenhydramine. SleepBetter.org explains continually taking this antihistamine can lead to heart palpitations and cause it to become less effective over time. If you keep taking more and more to fall asleep, you once again run into the problem of overdosing on acetaminophen.

Aspirin is a staple in many cabinets. | iStock.com

Since nearly everyone goes generic with this medication, we decided it wasn’t worth singling out a specific brand. Long considered the gold standard for minimizing pain and reducing fevers, aspirin can actually be quite dangerous when given to children. Healthline explains treating a child who has a viral infection with aspirin seriously increases their risk for Reye’s syndrome, a rare condition that causes severe liver and brain swelling. For whatever reason, it’s much more common among children. Since many infections like chicken pox might be mistaken for a cold at first, you never want to give a child aspirin in the off-chance they have something more serious. 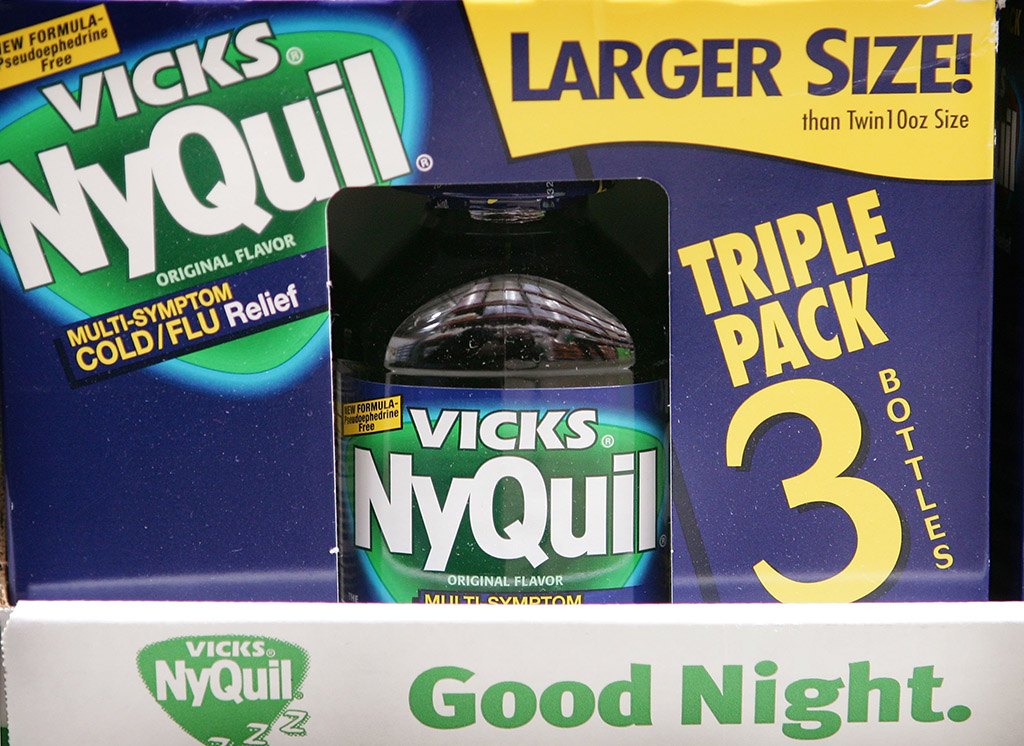 Like with Tylenol PM, many people reach for a dose of NyQuil to fall asleep when they’re perfectly healthy. An antihistamine called doxylamine is responsible for the drowsiness. While it can be helpful to induce sleep when you have a cold, one story published in American Family Physician reports this antihistamine often isn’t very effective, can diminish sleep quality, and may make you drowsier during the day. This means taking NyQuil for a prolonged period of time as a sleep aid may render the product both ineffective and addictive.

One of the most effective medications for reducing nasal congestion thanks to its ability to narrow blood vessels in your nose, Sudafed is also one of the most carefully monitored medications at drugstores. Though you don’t need a prescription, you can only purchase a set amount each time and you have to get it from the pharmacist. The reason for this is the cold medication’s primary ingredient, pseudoephedrine, can be converted to make methamphetamine.

In some cases, it may also be unsafe for your heart. One meta-analysis found that pseudoephedrine usage was moderately linked to increased blood pressure and heart rate. But for some people, blood pressure can rise to an unsafe level.

When little ones have a horrible hack, reaching for a bottle of cough syrup is a no-brainer. Most parents are probably too quick to opt for these cold medications, though. The problem with Children’s Dimetapp and similar products is dextromethorphan. While it may help suppress coughing, CNN reports kids have trouble metabolizing it, which can lead to toxicity.

The current recommendation is to avoid giving cough syrups to children younger than 2, but Mayo Clinic says research is still underway to determine whether or not it should be given to older kids. In many cases, other treatments are just as effective anyway. The FDA recommends trying a humidifier as well as nasal drops.