All the Diseases That Could Potentially Wipe out the Planet

It’s something nobody wants to think about. But those fictional movies about a terrible disease wiping out the planet might not be so fictional after all. Actually, experts believe the next pandemic might be much closer than you think. Here are all the diseases that could potentially wipe out the planet.

Ebola is one of those viruses that appears to come in waves. It seems like every few years, an Ebola epidemic hits a certain part of the world. The disease is typically found in Africa, but a few years ago, it did spread to other countries in Europe as well as the United States. All hands were on deck, and the U.S. and European countries were able to keep the virus under control. But since symptoms start out like the flu, it isn’t always easy to tell when you have the disease.

In Africa, the death rate can be as high as 90%. And many, many people have gotten the disease. If the virus spread through other continents in the manner it has spread through Africa, we might not have the sources or means to treat everyone — which could quickly turn Ebola into a destructive pandemic.

Next: This disease ran its course in the 14th century — but it could come back.

The plague could make a return. | iStock.com/Alen-D

The plague already had its turn to wipe out the population back in the 14th century, but that doesn’t mean it couldn’t happen again. Back in the 1300s, the plague killed about 75 million people. It mostly targeted those with weak immune systems, although perfectly healthy people also died. And it could happen again. The plague is a bacterial infection that’s very easily spread, which means it could potentially infect billions of people.Basic sanitary practices have helped prevent the disease from recurring in pandemic form, but it has not been eliminated. Swollen lymph nodes are the most common symptom, followed by fever, chills, muscle aches, and headache.

Next: This disease is similar to Ebola. 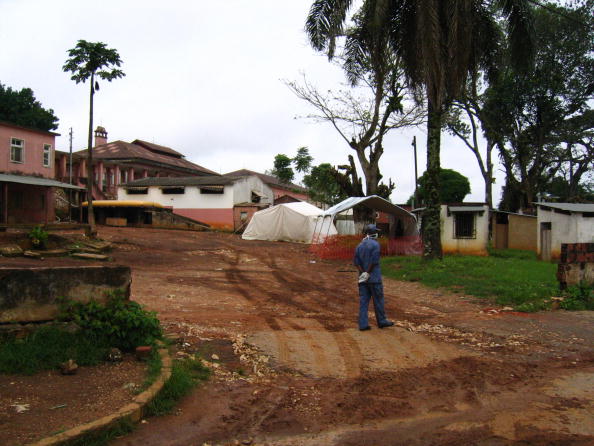 A treatment center in Angola for the Marburg virus, 2005. | Florence Panoussian/AFP/Getty Images

The Marburg virus strain comes from the same family as the Ebola virus. It’s highly fatal and frequently found in Africa, but outbreaks have also occurred in Germany and Yugoslavia. It also spreads the same way as Ebola. Patients can be infected but not show symptoms for up to three weeks, which makes the virus easily spreadable during that time since people don’t know they have it. It could potentially wreak havoc on the world in the same way Ebola could if an outbreak ever occurred.

Next: As medicine gets older, these become more prominent.

Antibiotic resistant bacteria are more common than you think. These bacteria kill about 23,000 people each year in the U.S. For years, the same antibiotics were used to control bacteria such as staphylococcus, known today as MRSA. But over time, bacteria became more and more resistant to the antibiotics. Today, it’s difficult to treat a MRSA infection because standard medications don’t work. And in the next 100 years or so, those bacteria could become even more resistant, and new resistances among other bacteria could form. Without a way to treat it, the bacteria could spread to others and take the lives of billions of people.

Next: This outbreak occurred once, and it might happen again.

The Spanish flu doesn’t have a cure. | scyther5/iStock/Getty Images

When the Spanish flu struck in 1918, it infected an estimated 500 million people. But since this was 100 years ago, medication was very different. Today, there’s a chance the flu wouldn’t be as deadly as it was back then. However, if hundreds of millions of people are infected — or even billions — hospitals around the world might not have the bandwidth or resources to treat everyone. This could lead to many deaths. The Spanish flu exhibits normal flu-like symptoms but often leads to pneumonia. And for those with weak immune systems, that could be deadly.

Next: This is another flu virus that could kill billions.

The bird flu has become more common in places like Africa and Asia. | Seyllou/AFP/Getty Images

Another form of influenza virus, the bird flu had a scare once a few years back. A 2018 Newsweek article actually dubbed bird flu likely to be the next pandemic. This type of flu virus is new to humans. It typically spreads from chicken to chicken; it didn’t actually infect humans until 2013 when it was discovered in China. Although the virus has not spread to the U.S., it would be easy for people to transport the virus if they come in contact with poultry. According to Newsweek, H7N9 has a higher mortality rate than any other pandemic-causing virus. A higher mortality rate means it could do serious damage to the world population.

Next: A third and final influenza virus

Swine flu is another potentially deadly viral disease. Actually, a swine flu pandemic affected Mexico between 2009 and 2010 and led to thousands of known deaths — but the World Health Organization believes many more people may have died from it than we actually know. The disease spread around the world, and by the time it was declared a pandemic, 74 countries had reported cases. This type of influenza virus is unique in that it doesn’t necessarily affect people with weak immune systems. Actually, most of the people who died were young and healthy. This means the pandemic could affect a portion of the population that should normally be able to outlive a virus like this.

Next: This respiratory infection could cause a pandemic. 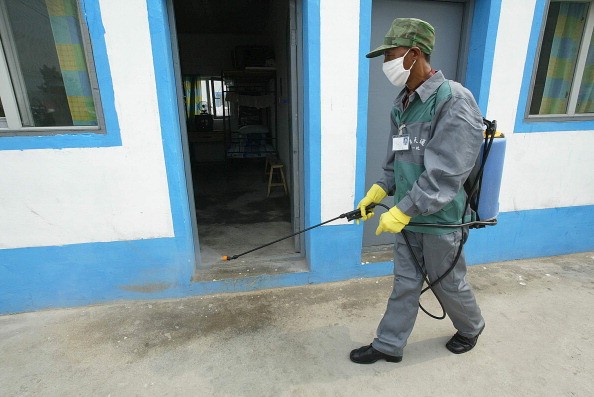 A man sprays disinfectant to prevent the spread of SARS in China, 2003 | Frederic Brown/AFP/GettyImages

Severe acute respiratory syndrome, or SARS, could potentially wipe out the population. It killed nearly 1,000 people in 2003 and might come back stronger if another outbreak ever occurs. The virus comes from the same family as the common cold, but it’s much worse. Plus, symptoms start out just like the flu, which means it isn’t always easy to diagnose and people might not get help right away. Since it’s a virus, antibiotics will not cure it. The body’s immune system is the best way to fight it off, so if a pandemic were to occur, it could claim a lot of lives.

Next: This disease was named for where it started.

A woman disinfects a turnstile to prevent the spread of MERS. | Anthony Wallace/AFP/Getty Images

Middle East respiratory syndrome, or MERS, is a disease that started in the Middle East. It was believed to have been passed from camels to humans. And although only 2,000 people have been infected, about one third of them died. This means MERS has the potential to wipe out billions of people if it ever became a widespread pandemic. Once the disease is passed from camels to humans, it can also be passed from human to human. Saudi Arabia and the United Arab Emirates have seen several small-scale outbreaks of the disease through the years.

Next: The next pandemic could be caused by a disease that doesn’t exist yet.

Some scientists believe the next pandemic could be a disease that doesn’t exist yet. | Wavebreakmedia/iStock/Getty Images

There is also the potential for a deadly disease that doesn’t even exist yet to cause widespread damage. It’s been dubbed “disease X” and although scientists don’t know what it is, they see it as imminent. With so many strains of bacteria and viruses able to adapt and form newer, more powerful diseases, it’s only a matter of time before something extremely deadly develops and wipes out much of the population. Each year, the World Health Organization discusses the top diseases to prioritize finding a treatment for. This is their attempt at lessening the blow if a pandemic did occur. However, there are many diseases that have yet to be developed or discovered. But scientists are certain there is one on the way.

Next: The risk of a pandemic is higher than ever.

We’re more at risk for pandemics today than ever before

Today, there is a greater risk for a pandemic than ever before, and there are a few reasons for this. The world population keeps growing, which means more people are living in more confined areas (such as major cities), which poses a greater risk for spreading diseases. Plus, as new homes are built, more land needs to be used — and building in previously uncharted territory means encountering animals holding viruses and bacteria we might not be familiar with. Plus, global travel makes it much easier for diseases to spread from one country or continent to another.

Next: Are we prepared for the next pandemic?

We might not be prepared for the next pandemic

Are we prepared for the next pandemic? | Viktor_Gladkov/Getty Images

Disease can strike at any time. But the U.S. likely isn’t as prepared as it could be. We haven’t dealt with a serious pandemic in years, and when one does occur, we might not be able to keep it under control. While the U.S. has one of the most advanced health systems in the world, there isn’t much in terms of budget for pandemic preparedness. This means we’d likely get thrown into a pandemic and have to navigate our way through it without having any kind of plan for what to do if something like this happens.

Next: There are a few reasons a pandemic would be deadly.

Hospitals might not be able to handle so many patients. | Antonio_Diaz/Getty Images

Pandemics take so many lives because health systems are unprepared when they occur. In some countries, the health system is already broken. If thousands of people get sick, it only makes matters worse. And even in countries with well-developed healthcare systems, thousands or millions of illnesses all at once means the resources would be stretched thin. If you can’t give someone the precise care they need, more people might lose their lives.

Next: There isn’t a great way to fight a pandemic.

Preparedness is likely the only way to fight a pandemic

Doctors know they need to prepare for the worst. | Ridofranz/iStock/Getty Images

It’s difficult to prevent a pandemic in today’s world. But being prepared can play a large role in keeping the pandemic under control or at least controlling it more quickly. However, if the U.S. or the world is not prepared for a pandemic, it could cause widespread harm. And in areas with higher populations (such as New York City or L.A.), an uncontrollable outbreak could wipe out entire populations.

Next: Experts firmly believe another pandemic is coming — but how soon?

Experts believe another pandemic is imminent

It’s only a matter of time before another pandemic hits. | iLexx/Getty Images

We go on living our lives every day and don’t think much about a potential pandemic. But researchers who study infectious diseases believe the next pandemic is imminent, and they say it could happen within the next 10-15 years. But some researchers are worried that the government won’t heed their warnings since there have been other issues that have been swept under the rug (specifically, climate change).