Donald Trump Jr. is no stranger to the media, especially since the news of his high-profile divorce broke. While Vanessa Trump, his wife, always seemed more low-key and ready to take a step back from the spotlight, the same can’t be said for Don Jr. His wild Twitter escapades have garnered plenty of attention, as have hunting photos of him from years past. And now, a whole new can of worms is being opened for the eldest Trump child.

Recently, old Twitter messages from Don Jr. to a model have been revealed — and he reportedly sent them just a month after his wife gave birth to their third child.

1. Melissa Stetten is a retired model — and she doesn’t think highly of the Trumps

This model revealed some interesting DMs. | Melissa Stetten via Instagram

According to People, Melissa Stetten didn’t know Don Jr. on a personal level at all before he reached out to her on Twitter. But then when he started following her, she went along with it and followed back. “I always thought of the Trumps as idiots so it was entertaining to see his failed attempts at hitting on me,” she said.

As for what Melissa is up to these days, her Twitter profile explains she’s a retired model, and she plays on a recreational basketball team with other stars.

Next: This is when things really got weird between the two on Twitter.

2. Don Jr. sent direct messages to her after she posted a joke on Twitter

She shared this shocking message. | Melissa Stetten via Twitter

The Cut explains Melissa found Don Jr.’s strange Twitter messages that came into her direct messages in 2011 and released them back into the public eye. Melissa wrote, “I tweeted a joke about pulling a muscle changing a tampon and he replied asking if I smelled bacon? Cool joke.”

According to one of Don Jr.’s messages to her after the initial bacon one, he wrote, “glad I opted not 2send the tweet asking 4pics from ur bathroom tweet last night;).” As if this poorly-spelled message wasn’t enough, he went even further.

Next: We’re unsure why Don Jr. is so obsessed with this one food.

He seems to have a thing for bacon. | Donald Trump Jr. via Twitter

The strangest part of this Twitter interaction was how often Don Jr. brought up bacon. To get a rise out of the eldest Trump child, Melissa tweeted at him that she was “soaking my body in bacon today.” To this, Don Jr. responded with, “Stop that!!! I am a happily married man ;),” The Cut reports.

He also asked Melissa on Twitter why women haven’t come up with bacon perfume yet. Additionally, he posted tweets asking if anyone else had a “bacon fetish.” It all seems pretty weird to us.

Next: Melissa Stetten may not have been Don Jr.’s only female encounter.

4. Don Jr. also allegedly had an affair with a pop star 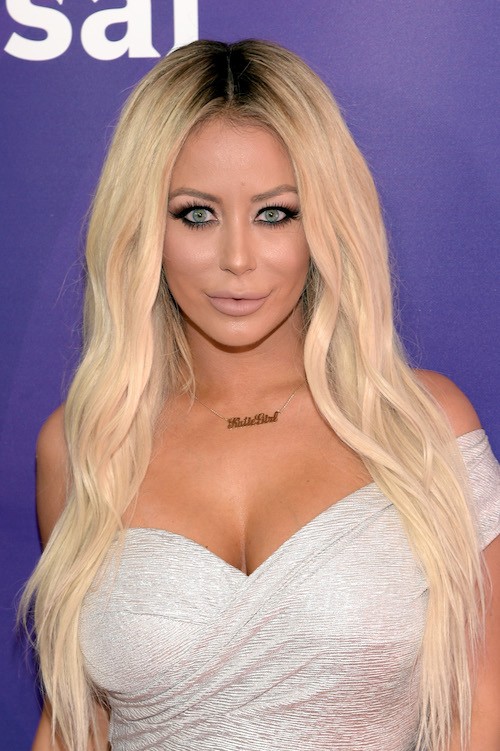 He had a fling with this pop star. | Jason Kempin/Getty Images

Things aren’t looking good for Don Jr.’s reputation these days. According to the New York Daily News, Don Jr. and singer Aubrey O’Day from the pop group Danity Kane met on the set of Celebrity Apprentice back in 2011 — the same year as the mysterious tweets to Melissa Stetten. According to one source, Don Jr. told Aubrey he was over his wife and he no longer loved her.

“Aubrey fell hard for him,” the source added. “She thought they were going to be together for real.”

Next: Aubrey dropped subtle hints of the affair that we totally missed.

5. Aubrey O’Day even wrote a song seemingly about Don Jr.

Did she release a cryptic song about her relationship? | Chelsea Lauren/Getty Images

In 2013, Aubrey released a song titled “DJT,” which many suspect is about Don Jr., New York Daily News reports. The lyrics say, “Whatever the truth is defines the reality of you and I forever, and I need to be able to define that before I can walk away.” Aubrey also cryptically mentions that “I need to know and you know” if it was “all a fairytale” in the song.

Aubrey has yet to comment on the reports. But according to one source, her lyrics may have some merit, as Don Jr. aggressively pursued her.

Next: Other rumors suggest this is really why Vanessa is divorcing Don Jr.

6. Other women aside, could this be the reason Vanessa is divorcing Don Jr.?

Money might have played a big role in their divorce. | Jeff Swensen/Getty Images

Page Six explains some friends claim Vanessa is leaving Don Jr. because he keeps her on a strict budget and “treats her like a second-class citizen.” Though we may assume the two live a lavish lifestyle, perhaps it’s Don Jr.’s tight leash that has Vanessa running the other direction now. One source even says Vanessa relied on her mother for money when finances were tough.

Vanessa’s spokesperson strongly denies the claims, however. So whether or not there’s any truth to these claims, we’ll have to wait and see.

Next: Even without money issues or other women, the two of them have had problems.

7. The couple was reportedly having issues before they were even married

Their lifestyles are not aligning. | Brendan Hoffman/Getty Images

It’s tough to verify whether Vanessa was really having money issues, but other sources claim the marital problems go back even before the couple got married. Page Six explains one source said friends were telling Vanessa not to marry Don Jr. in the first place, and she was seeing divorce lawyers before her husband’s father’s presidency began.

Other friends have said she hates that he has such an active presence online and is always shining in the spotlight. A life in the public eye isn’t what she wanted for herself or their five kids, so it seems. And perhaps that’s one of the many reasons Vanessa and Don Jr. are calling it quits.