The Dark Truth Behind Donald Trump’s Grandfather’s Controversial Fortune and Immigration to the U.S.

You’ve likely heard many stories about Donald Trump and his family. However, one thing you might not know much about are the details of how Donald Trump’s family built their fortune. Donald Trump is the grandson of German immigrant Friedrich Trump, a barber-turned-businessman who became quite wealthy through what some might say were scandalous practices.

Here is the dark truth behind Donald Trump’s grandfather’s controversial fortune and immigration to the United States.

He evaded military service. | The Northwest Files via YouTube

Trump reportedly admires people who served in the military, but his grandfather, Friedrich Trump, tried to dodge his military duties. He was supposed to complete mandatory military service, but managed to avoid it, according to documents uncovered by historian Roland Paul. Friedrich’s decision not to complete his military service would later prove to be problematic, as we’ll discuss later.

Next: Donald Trump’s grandfather was determined to do this by any means necessary.

He illegally immigrated to the United States 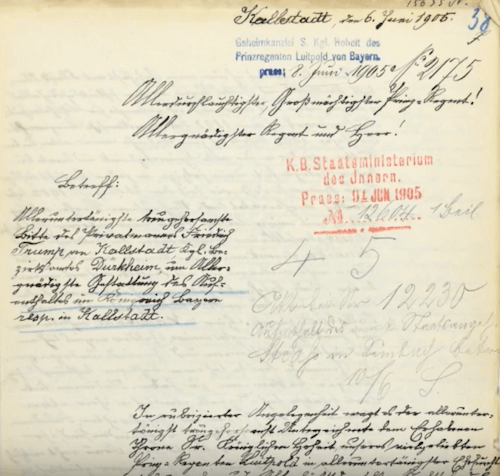 These records revealed a shocking fact. | Nirvana News via YouTube

Friedrich emigrated from Germany in 1885 at the age of 16. He was eager to come to the United States. However, he didn’t do one very important thing. Trump’s grandfather failed to provide German authorities with proper notice that he would be leaving for America. This move, combined with unfinished business with the military, would further complicate things for Friedrich.

Next: Here’s the truth about the origins of the Trump family empire.

The Trump family fortune has a controversial origin

Friedrich moved to New York to join his sisters, who were already residing there. He then traveled west to open a business and take advantage of the Gold Rush. He later opened Arctic Restaurant and Hotel, taking gold nuggets as payment, reports The New Yorker.

According to Gwenda Blair, author of The Trumps: Three Generations of Builders and a Presidential Candidate, miners could use their gold to buy prostitutes at Trump’s establishment. Bloomberg Business Week unearthed an 1899 advertisement for the Arctic Restaurant and Hotel, which says furnished, private boxes were available “for ladies and parties.” Blair said the private boxes usually included a bed and a scale for weighing the gold used to pay for services performed by the prostitutes.

Next: Trump’s grandfather was ordered to leave this country.

He was ordered to leave Germany or face deportation

He had no choice but to return to America. | WION via YouTube

In 1904 Friedrich decided to return to Germany because his wife, Elizabeth, was getting homesick. However, he was later ordered to leave Germany within eight weeks or face deportation. His avoidance of military service came back to haunt him. He was also held accountable for emigrating illegally.

Historian Roland Paul told the German newspaper Bild: “Friedrich Trump emigrated from Germany to the USA in 1885. However, he failed to de-register from his homeland and had not carried out his military service, which is why the authorities rejected his attempt at repatriation,” reports The Irish Times.

Next: Friedrich Trump did this so he could stay in Germany.

He begged to stay in Germany

Once German officials discovered Friedrich was back, things began to take a turn for the worse. However, Trump’s grandfather put up a fight to remain in his home country. He decided to write a letter to Luitpold, Prince Regent of Bavaria. In the letter, which was written in 1905, he pleads with the “adored, noble, wise, and just” leader to have mercy and not deport him. However, Friedrich’s pleas fell on deaf ears. Luitpold rejected the request.

Next: He became a rich man.

This is what helped build the family fortune. | Scott Olson/Getty Images

Friedrich was successful and grew very rich from his business. Bloomberg Business reports that after his attempts at remaining in Germany were thwarted, he returned to New York, where he eventually helped his son (Donald Trump’s father, Fred) fund his own business.

Trump was a rich man when he left Whitehorse in 1901 to return to his native Kallstadt, Germany, where he later deposited savings of 80,000 marks in the village treasury, Blair recounts. Unable to regain German citizenship, he returned to New York with his riches. That amount—equivalent in purchasing power to about half a million euros in 2014—ended up funding the Trump family’s first residential real estate investments in the New York area, later carried on by his son Fred and grandson Donald.

Next: The fate of the Arctic Restaurant and Hotel.

The restaurant and hotel is now a tourist attraction

The history of Trump’s grandfather lives on in Canada. The former site of the Arctic Restaurant and Hotel, which was located in Bennett, British Columbia, Canada is now being transformed into a tourist site. Reports McLean’s Magazine:

After prospectors found gold, “B City” became the hub of the Klondike Gold Rush …. Friedrich Trump, Donald’s great-grandfather, joined the bandwagon—with no wagon, but rather hired Indigenous locals to carry much of his load—and established the Arctic Restaurant and Hotel, which also served as a brothel, and which Parks Canada and the Carcross/Tagish First Nation are now restoring to be part of an interpretive tour.