Early Signs of Parkinson’s Disease You Should Watch Out For

Parkinson’s disease is a neurodegenerative disorder that is caused by low dopamine. The disease affects dopamine-producing neurons in the brain and causes several debilitating symptoms. But diagnosis is not always easy, since many symptoms are similar to other neurological diseases.

These are some of the earliest signs and symptoms to watch out for, and check out page 9 for the most surprising sign.

Your handwriting has changed 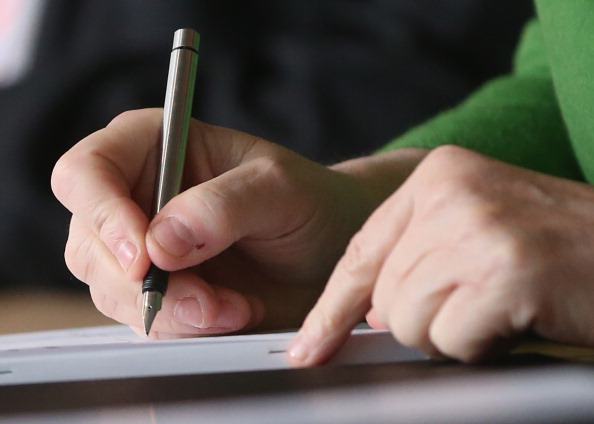 Handwriting is one of the first signs. | Sean Gallup/Getty Images

If you had the same handwriting style for years but suddenly notice it has changed, that could be a cause for concern. With Parkinson’s, handwriting often becomes smaller or more squished together as you begin to have problems with movement. It’s known as micrographnia. It is one of the earliest signs of Parkinson’s. Be mindful, though, that your handwriting may naturally change as you get older and isn’t always an indicator of the disease.

Next: This is one of the most common symptoms.

Tremors are one of the most well-known signs of Parkinson’s. A slight tremor in the extremities, such as the hand, foot, or fingers, could mean you have the early stages of the disease. But tremors in the chin are also possible. It’s important to notice whether the tremors are happening at rest. If they happen after exercise, it’s pretty normal, but at rest could be a sign of a serious problem.

Next: This might not be as high-quality as it once was.

Your sleep quality has decreased

If you’ve always been a decent sleeper but suddenly have uncontrollable movements while in bed, it could mean you have Parkinson’s. While tossing and turning is fairly common every once in a while, night after night of excessive movement can be a sign of something more serious. If you or your spouse has noticed a lot of movement, see your doctor. Sleep patterns are one of the first things affected with Parkinson’s.

Next: You’re having this trouble day-to-day.

You’re moving slower than you used to

It’s common to feel a bit slower in the morning as you get older. And since Parkinson’s is typically diagnosed in older adults, it may seem like no big deal to have slower movements. But if you find that you feel stiff in the morning and it doesn’t go away throughout the day, it could be something known as bradykinesia, which is a sign of Parkinson’s. Waking up and being a bit slower to get out of bed is one thing; feeling slow or still all day is another, more serious thing.

Next: If this changes, it could be a bad sign.

Your voice has changed

There are many different causes for a voice change — a cold, laryngitis, and more. But those changes are temporary, and if your voice begins to permanently change, it could be due to Parkinson’s. If your voice becomes lower or softer than it once was, or you constantly sound hoarse, it could be a sign of a bigger problem. Your speech may also become slurred or slower than usual.

Next: Your face says a lot.

If your facial expressions have reduced, some might say you have a “masked” face. This is a common early sign of Parkinson’s. It’s technically known as hipomimia, and it means you have fewer movements and expressions in your face than you should. Since facial expressions are so important in conversation, a masked face makes it difficult to communicate with others. If you notice a masked face plus any speech problems, it could very well be a sign of the disease.

Next: This plays a role in many disease, and Parkinson’s is one of them.

You’ve been feeling dizzy or faint

Dizziness or faintness is often a sign of low blood pressure. And while low blood pressure can be linked to many diseases, Parkinson’s is one of them. If you’re feeling dizzy on a regular basis or you pass out, you should see a doctor. But if it’s accompanied with any additional Parkinson’s symptoms, it could be the disease.

Next: Your stance can say a lot about your health.

If you have stiff limbs or muscles, it can affect your posture. A stooped or hunched posture is a common early sign of Parkinson’s, and it’s usually because of stiffness problems. Poor posture can lead to other problems, such as balance issues or decreased muscle strength. There are ways to help improve posture, but you need to get to the bottom of the problem first.

You have a weak sense of smell

Weak sense of smell is one of the first signs. | DeanDrobot/iStock/Getty Images

As recently as 2017, researchers discovered that sense of smell is an early sign of Parkinson’s. And it could be one of the very first signs. The study found that people with a poor sense of smell were almost five times’ more likely to develop Parkinson’s than those with a strong sense of smell. Also, race is a factor: White people showed a stronger relationship between smell and Parkinson’s risk than black people.

Next: Surprisingly, Parkinson’s causes this.

Constipation is sometimes a cause for concern. | BrianAJackson/Getty Images

Those with Parkinson’s often have trouble passing stools. This is because the disease can lead to problems with the autonomic nervous system, which regulates smooth muscle activity. If the system is disrupted, such as with Parkinson’s, constipation can become an issue. Plus, some Parkinson’s medications cause constipation as well.

Next: Here’s when to see a doctor.

See your doctor if you have any symptoms. | Nensuria/iStock/Getty Images

You know your body better than anyone else. If you experience any of these symptoms, and they seem unusual, it’s important to see a doctor right away. Those with Parkinson’s fare best when they are diagnosed early. The longer you treat the disease and the earlier the stage it’s discovered, the better chance you have of living a fulfilling, high-quality life in your older years. Plus, even if the symptoms are not Parkinson’s, they could still indicate another medical problem.

Next: Here’s how common the disease actually is.

Next: This is the most common age for diagnosis.

The disease is typically diagnosed around age 60 — but not always

The most common age for diagnosis is 60, so if you experience any of those signs or symptoms around that age, see a doctor immediately. But early diagnosis — as early as 40 — is also possible. Parkinson’s affects about one in 100 people. But misdiagnosis is common, since the symptoms of Parkinson’s are very similar to other neurological diseases, so a few trips to the doctor or a second opinion might be necessary to exhaust other possibilities and diagnose Parkinson’s.

Next: Here’s how your life expectancy is affected.

Life expectancy with Parkinson’s is about the same as without

You can still live a fulfilling life with the disease. | monkeybusinessimages/iStock/Getty Images Plus

Although Parkinson’s is debilitating, doctors do not consider it a fatal disease. Those with the disease have a life expectancy that is about the same as those without it. But Parkinson’s greatly affects balance and movement, which can lead to falls. And in older people, those falls can create serious, sometimes life-threatening injuries that can affect quality of life or be potentially fatal. Choking is another possibility with the disease, since muscle movement is greatly affected.

Next: There are several treatment options on the table.

There are various treatment options. | iStock.com/MILANTE

There are various ways to help ease and slow the symptoms of Parkinson’s. Many prescription drugs are available, but other treatments, such as exercise and medical marijuana, are also recommended. (Medical marijuana laws vary by state.) Plus, physical therapy can help slow muscle stiffness and delay the hunched posture. If you’re diagnosed with the disease, talk with your doctor about the best treatment options for your situation.