These Easy Hacks Will Make Your McDonald’s Breakfast Much Healthier

When you’re running late, it’s hard to beat something as quick and easy as a McDonald’s breakfast sandwich. However, some of the sandwich options McDonald’s offers are far from healthy. Here are a few hacks you can use next time you’re in a rush. They’ll help you satisfy your McDonald’s craving without completely sacrificing health.

Order egg whites instead of an egg 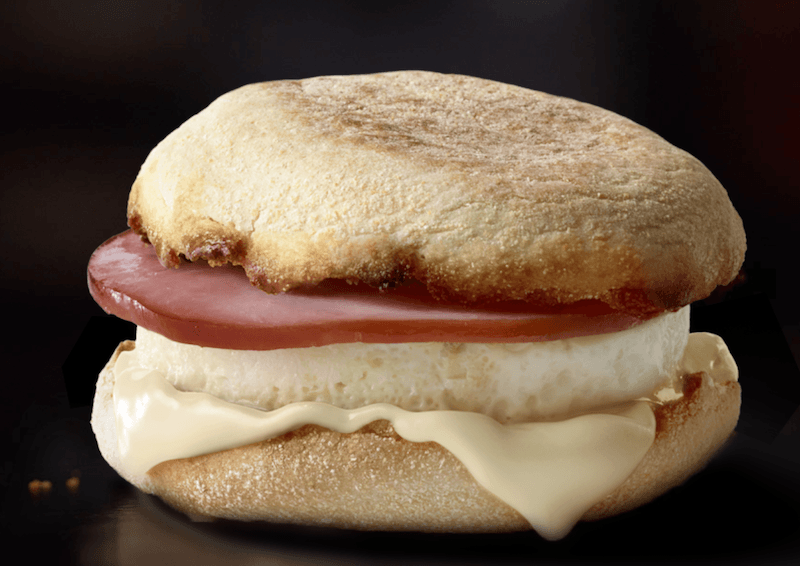 Keep the yolks out of your McDonald’s order. | McDonald’s

When you cut out the yolk, you’re also cutting out more than 60% of your daily value of cholesterol. Cholesterol contributes to plaque buildup in the arteries, which can lead to a heart attack or stroke. If you’re craving an egg McMuffin, order it with egg whites instead of a regular egg. Your heart will thank you later, and you probably won’t even notice the difference.

Next: The type of egg you order can also make a difference.

Order a round egg 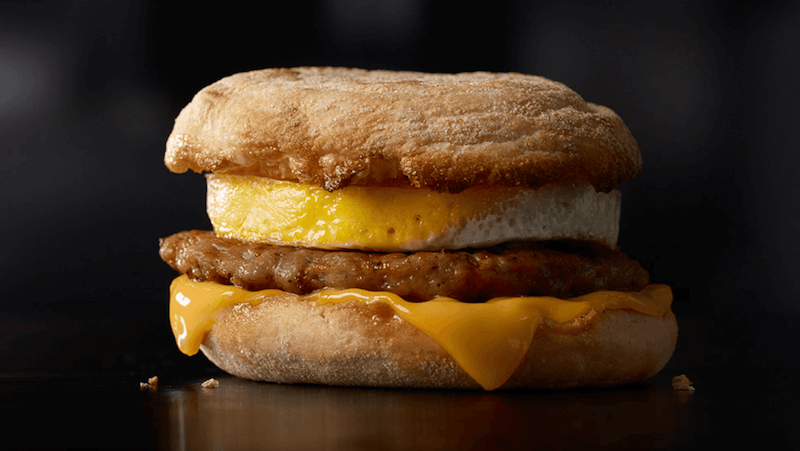 If you can’t bear the thought of ordering egg whites, at least order a round egg on your sandwich. According to LA Weekly, the folded egg on your sandwich is actually made from a powdered mix — yikes. If you order a round egg, you’re putting a real egg into your body. Although you’re still consuming a lot of cholesterol, you’re at least getting the nutrients in a real egg, such as protein and B vitamins.

Next: Avoid this at all costs.

Avoid anything on a biscuit 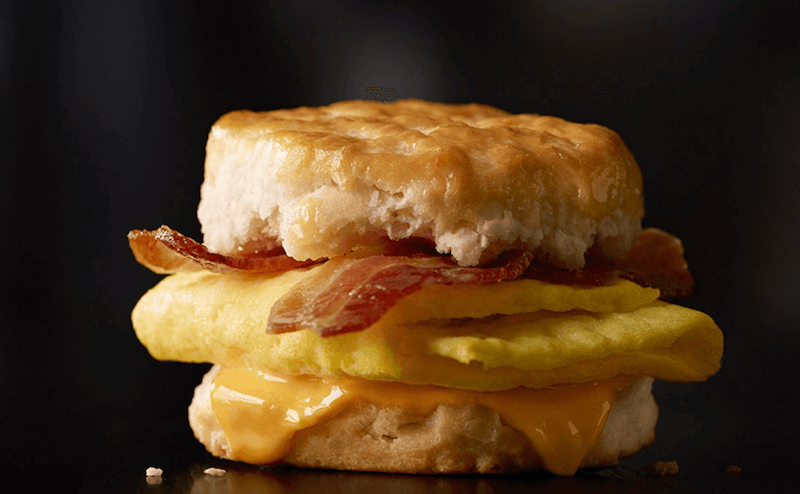 Biscuits are bad news. Although they taste delicious, they are much less healthy than ordering a sandwich on an English muffin. The greasy McDonald’s biscuits add fat and sodium to your order. Compared to a sausage McMuffin with egg, a sausage biscuit with egg has an additional 4 grams of fat (3 grams of saturated fat) and 330 milligrams of sodium — and the biscuit sandwich doesn’t even come with cheese. You’re always better off ordering a breakfast sandwich on an English muffin.

Next: This type of meat is the best option.

If you’re craving something with meat, choose bacon 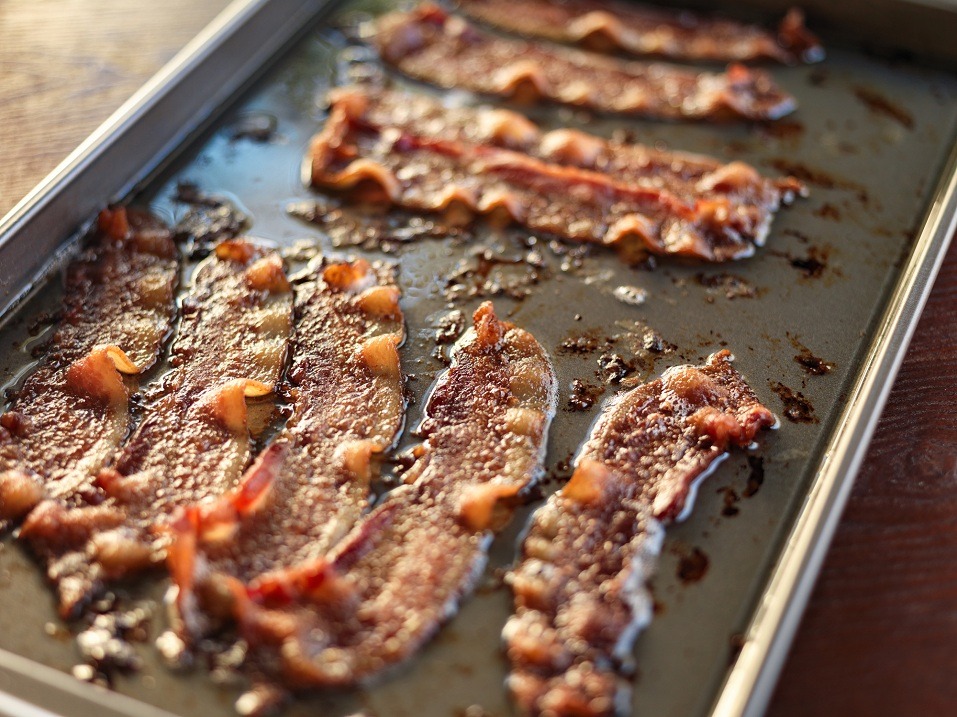 When in doubt, go for bacon. | iStock.com/rez-art

Bacon is high in sodium, but it has less fat than steak or sausage. Plus, you can’t remove an entire sausage patty or a big chunk of steak from your sandwich and still enjoy it, but you can remove one piece of bacon and still have another piece to add flavor. If you order a bacon and egg McMuffin, you’ll give yourself the protein from eggs, the flavor from bacon, and none of the grease from a biscuit.

Next: Leave this topping behind. 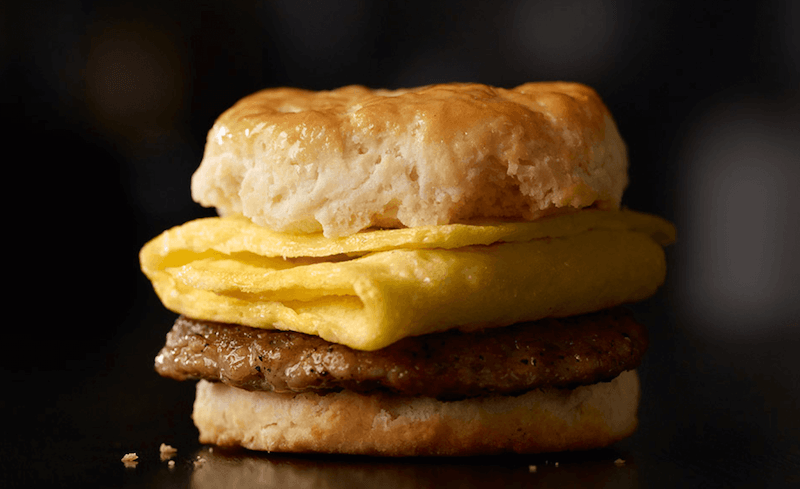 Keep the protein, but ditch the cheese. | McDonald’s

It might seem sad to order something without cheese, but when it comes to your health, it’s for the better. One slice of American cheese has a whopping 9 grams of fat. If you cut that out of your breakfast, you’re also saving yourself 5 grams of saturated fat — that’s about 25% of the recommended daily value. If you need that McDonald’s breakfast sandwich in the morning, go for bacon and a round egg on an English muffin.

Next: Try this if you have time.

Make an egg McMuffin yourself 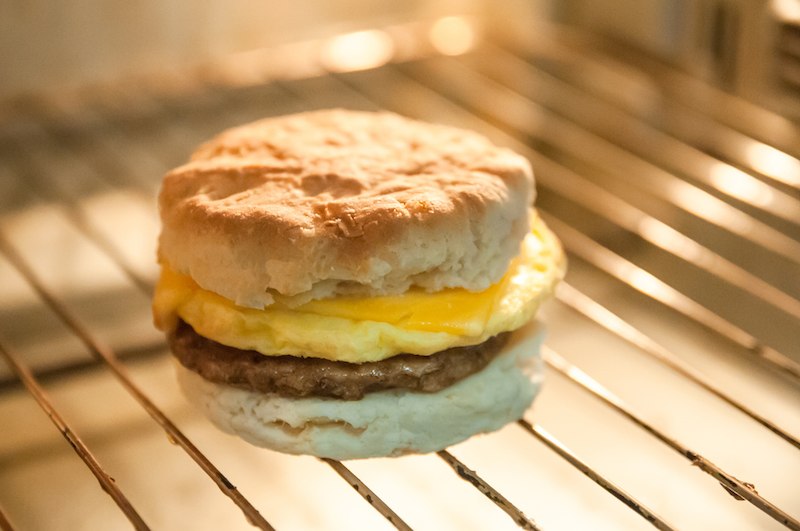 You can make this delicious breakfast at home. | Esdelval/Getty Images

You could make your own version of the egg McMuffin. Cook up an egg and one piece of bacon. Because bacon has so much flavor, one piece will be fine. Put it on a whole wheat, toasted English muffin (hold the butter). If you can’t live without cheese, add a half a serving of shredded, part-skim cheddar cheese. And avoid putting processed American cheese on your sandwich — it has much more fat and sodium.

Next: Choose these options instead of a breakfast sandwich. 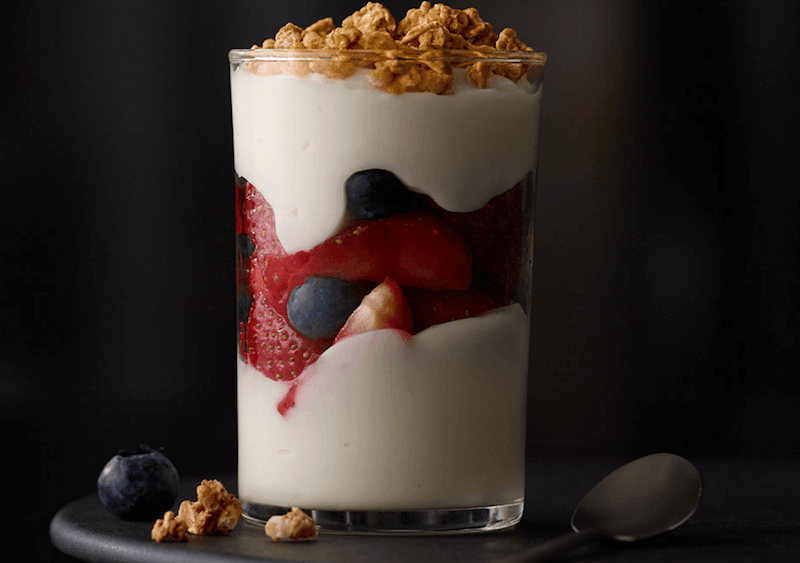 The parfait is a lot healthier than a breakfast sandwich. | McDonald’s

There is no classic fast food breakfast quite like a McDonald’s egg McMuffin. However, the world’s largest fast food chain does offer some healthier options. If you don’t have time for breakfast but still want to stay healthy, order a fruit and yogurt parfait. It’s packed with fruit but only has 150 calories and 2 grams of fat. For something a little more filling, try the fruit and maple oatmeal. It has 310 calories and 4 grams of fat, plus a ton of vitamin C and fiber.