Vladimir Putin is well known in the United States as the president of Russia. Plus, his ties with President Donald Trump have put him even more in the spotlight than usual. But this political figure doesn’t share much of his personal life with the public. In fact, most people probably didn’t even know Putin has two — possibly three (page 6) — daughters.

Putin has 2 daughters with his former wife

Vladimir Putin keeps his family out of the media. | Alexei Nikolsky/AFP/Getty Images

Putin’s children fly under the radar, but he actually has two confirmed daughters with his first wife, Lyudmila Putina. His daughters — Yekaterina (known as Katerina) and Mariya — were born in the 1980s, but their lives have been kept under wraps, according to Express. Putin has always kept his personal life out of the spotlight, so the girls’ whereabouts and life happenings are not very well known. In fact, his younger daughter even dropped her father’s surname to become more unrecognizable.

Next: His younger daughter grew up doing this.

His younger daughter is a dancer

Katerina grew up dancing. | The State of Steph via Instagram

Putin’s younger daughter, Katerina, reportedly uses her grandmother’s maiden name as her surname, but the name is unknown. According to Express, Katerina went to a German school in Moscow and grew up dancing. She is married to Kirill Shamalov, the son of a Nikolay Shamalov. Nikolay Shamalov is the co-owner of a Russian joint-stock bank and also the vice president of Sibur Holding, a Russian chemical company. It is unknown whether the two have any children.

Next: Katerina also has a very successful career.

Katerina is an extremely accomplished woman 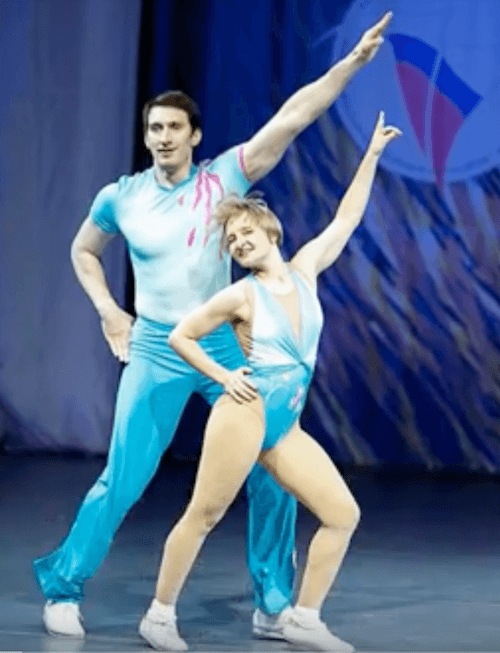 She is a gifted dancer. | WE News via YouTube

Next: Katerina and her husband are worth billions.

Katerina and her husband are worth about $2 billion

Katerina is a businesswoman in her own right. | Ukraine Today via YouTube

Vladimir Putin lives a lavish life, and his daughter is no stranger to wealth, either. Katerina and her husband are reportedly worth a combined $2 billion. Katerina’s husband, whose father is extremely wealthy, likely followed in his father’s footsteps with his companies. But her husband’s actual occupation is unknown.

Next: Putin’s other daughter is even more anonymous than Katerina.

As for his other daughter, we don’t know much about her. | The State of Steph via Instagram

Mariya Putin, the older of the two daughters, remains even further out of the spotlight than her younger sister. Her age is not known, but it’s been reported that she is about a year or two older than Katerina. Mariya went to school in St. Petersburg and reportedly lives in Holland, but her occupation is unknown. Her $3 million Holland penthouse went on sale in 2017. Mariya is said to be married to a Dutchman named Jorritt Faassen, but there is little information about the couple.

Next: Here’s why people speculate Putin has a third child.

Putin disappeared briefly in 2015, leading some to believe his new girlfriend had given birth

Did his new flame give birth to a third child? | The State of Steph via Instagram

Rumors swirled in 2015 when it came out that Putin might actually have a third daughter. After he and his first wife divorced in 2014, Putin supposedly began dating someone 30 years younger than him. In 2015, the Telegraph reported that Putin quietly flew to Switzerland when his girlfriend, Alina Kabaeva, went into labor.

Next: Putin refuses to do this.

Putin has yet to confirm the third child or the relationship

He isn’t keen to confirm personal details about his life. | Adam Berry/Getty Images

Despite the rumors, Putin has never actually confirmed the child or the relationship with Kabaeva. Although the New York Post did follow the story of Putin’s newest child, it was unable to actually confirm either one. Plus, one Russian media outlet ran a story about Putin’s supposed girlfriend a few years ago, and the government shut down the tabloid. Putin does his best to keep his life as private as possible, and Russian tabloids likely understand the risks of publishing speculative information about him.