Many Americans aren’t aware of this, but touching the Queen of England or royal family members is considered a big no-no. Unwritten rules suggest men bow and women curtsey, and handshakes are permitted only when royals initiate them. These guidelines may stem back to the Middle Ages when people believed monarchs were appointed by God.

Since the rest of the world isn’t as versed in royal protocol, many a breach has been committed, and the British press is quick to condemn the perpetrators. Here we’ll look at various celebrities and politicians who touched royal family members and how it went down.

During a 2009 visit, Michelle Obama put her hand on the back of Queen Elizabeth II — and royal watchers everywhere gasped. The act took place during a photo opportunity, and to the shock of the world, the queen returned the gesture. Some in the media called it a breach of protocol, while others dubbed it an extraordinary show of affection. Some witnesses even claimed the queen was the one to make the first move.

Next: When a sweaty athlete hugged a duchess

What did Kate think about all this? | Tim Rooke/Pool/Getty Images

As an American, you may have found nothing odd about LeBron James putting his sweaty arm around Kate Middleton after the Cleveland Cavaliers played a game in 2014. However, he was criticized widely in the British press for this breach of etiquette, which happened during a photo op when the duchess and Prince William were given jerseys.

Next: When a pop star clutched a prince

Singer Ed Sheeran was on his best behavior when visiting Buckingham Palace in December 2017 (he even covered up all his tattoos). However, he set some tongues wagging when he touched Prince Charles’ arm during a handshake. The future king was presenting Sheeran with the honor of Member of the Order of the British Empire.

Sheeran later acknowledged the breach on Today. “Apparently, I did a big faux pas … I shook his hand and then grabbed it and you’re not meant to do that.”

Next: The most inappropriate touch yet?

This was a case of a badly angled photo. | Lisa Marie Williams/ Pool/Getty Images

Move over, Camilla — was some competition at hand in 2015? Back then, the British media criticized the head of an Australian charity organization for appearing to place her hand on Prince Charles’ backside. Janine Kirk denied all of the claims. “I didn’t touch him,” Kirk said. I was guiding him around the event. It is just a funny camera angle.”

Next: A famous American actor roused a smile from the queen.

Actor Mickey Rooney broke royal protocol when he grasped the queen’s gloved hand and kissed it at a Washington, D.C. garden party in 2007. The queen simply smiled and chatted with Rooney and his wife. Meeting the queen was “something I’ve dreamed of all my life,” said the actor, best known for his films in the 1930s and 1940s.

Next: The press gave a prime minister a merciless nickname. 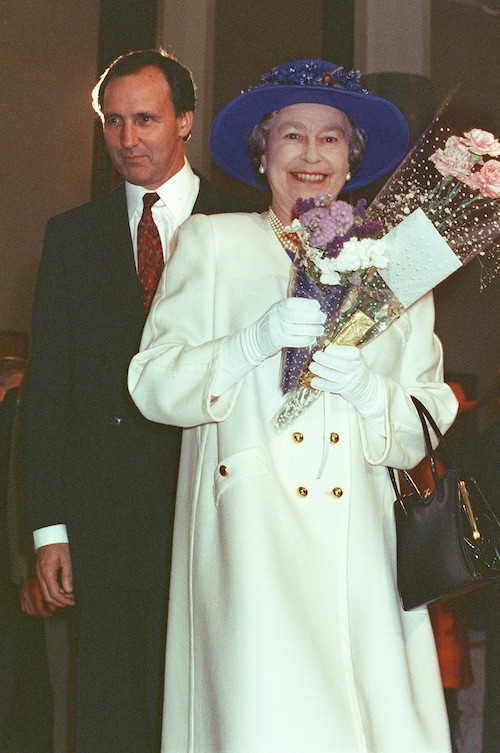 The British media went into a frenzy for this one. | Stephen Dupont/AFP/Getty Images

In a now infamous encounter, Australian Prime Minister Paul Keating was labeled “Lizard of Oz” by British tabloids after he put his arm around the queen when making introductions in 1992. The queen, however, was not offended, according to her private secretary, Lord Robert Fellowes, who called the talk “a lot of nonsense.”

Include this??? Incidentally, Keating’s successor, John Howard, was called out for touching Her Royal Highness in 2000. In this case, Howard was adamant that his hand did not touch the queen’s back as he was introducing her to people at a reception.

Next: An American mayor’s gaffe was remembered for life.

7. San Diego mayor was famous for a breach

When Bill Cleator was mayor of San Diego, California, he hosted a 1983 visit by Queen Elizabeth II. While on a harbor tour, he famously touched her back and said, “This way, your Majesty.” The British media declared the gesture an insult. “Get Your Hands Off Our Queen,” one tabloid headline screamed. The incident was included in Cleator’s obituary when he passed away in 1993.

Next: Even President Obama breached protocol.

8. President Obama made an ill-timed toast

He later spoke about the snafu. | Lewis Whyld/PA Wire

This breach may not involve touching, but President Obama suffered an embarrassing mishap in 2011 when he broke protocol by speaking over the national anthem. Once his speech, quoting Shakespeare, was complete, he raised his glass and said, “To the queen.” After several awkward seconds, the queen lifted her glass and then sat back down. Everyone followed suit.

In an interview, Obama was able to laugh off his mistake. He said the opening bars of God Save the Queen gave the end of his speech a far more “rousing” tone than anticipated.