Here’s what to know about fasting and meal skipping. |  iStock.com

The never-ending quest to find the optimal diet is leading scores of people to do something once considered taboo: skip breakfast. Admitting to forgoing the day’s first form of nourishment still draws skepticism from many, but it’s becoming increasingly common. Even famous faces like Hugh Jackman swear by intermittent fasting. But celebrity endorsements don’t necessarily mean you should follow suit, so it’s time to take a closer look at fasting.

To get started, it’s worth noting the special term because fasting is a tad different than skipping meals. With intermittent fasting, the idea is to go for a prolonged period of time without eating. Different methods vary, but the time period is usually somewhere between 12 and 36 hours.

Implementation is where things get a little confusing because there are many different ways to incorporate these fasted periods into your schedule. Life by Daily Burn highlights a number of different methods, including one that alternates fasted periods of 14 to 16 hours with feeding periods of 8 to 10 hours every day, one that call for a full 24-hour fast a few times per week, and a method that alternates fasting days that allow between 400 and 600 calories with regular eating days. One popular variation of this last one is the 5:2 method, which involves fasting two days per week and eating normally for the other five. 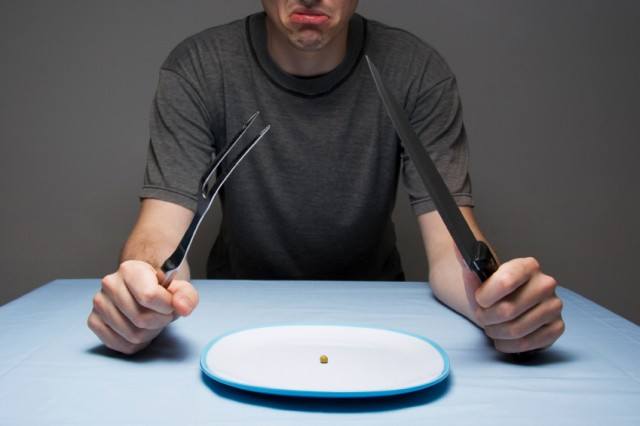 Simply just skipping meals will do you no favors. | iStock.com

When people simply skip meals here or there (opting out of lunch because you got swamped at work), the time from one meal to the next is generally shorter. The truly important distinction between skipping meals and fasting, though, is intention. Missing a meal you normally eat is often a mistake whereas fasting is a planned way of eating.

It’s probably no surprise the reason many have begun, or at least considered, fasting is the promise of weight loss. Studies on the subject are typically small, but the results are more than enough to encourage folks to try the plan themselves. One such study from 2005 involved 16 subjects who fasted every other day for 22 days, which led to weight loss. Another, slightly larger, study published in 2013 compared subjects who fasted every other day with those who stuck to a regular eating plan for three months. Once again, those who fasted lost weight.

As promising as these results are, how the subjects felt also matters. In the 2005 study, the authors noted participants were very hungry on fasting days and it never diminished. They also suggested attempting to continue such a plan for a longer period of time might not be feasible.

You can’t workout if you have no energy to burn. | iStock.com

When exercise comes into the picture, things get even more confusing. Those in favor of fasting often cite studies that have demonstrated working out without eating first can boost your ability to burn fat. One popular example was published in a 2013 edition of the British Journal of Nutrition. But there’s an important caveat: All subjects consumed a test beverage and lunch after the trial.

Unless your fasted state is ending immediately after you exercise, it might not be the best idea. Post-workout food plays a huge role in how well your body recovers from exercise. If you’re not planning on eating until hours after your morning sweat session, you could end up stalling your recovery and feeling pretty run-down.

Fasting might not do much good if it just leads you to eat a pile of pasta. | iStock.com/gkrphoto

Some researchers, and many nutritionists, remain skeptical of eliminating meals from the day because there’s evidence it might encourage people to scarf unhealthy foods when they finally have something to eat. One team of researchers found subjects who fasted for 18 hours were most likely to reach for high-calorie, starchy foods and least likely to go for vegetables than non-fasters.

It’s also important to note weight loss can also come from dehydration. Nutritionist and wellness expert Madelyn Fernstrom tellsWebMD much of that initial weight loss will come back as soon as you go back to eating normally. Remember, food contains a lot of water.

Anything that can reduce the potential of a life threatening disease is worth looking into. | iStock.com

Of course, weight loss isn’t the only reason people have become interested in intermittent fasting. Some scientists argue it could benefit your overall health and help you live longer. A 2015 pilot study had participants engage in a specific diet designed to mimic fasting where they consumed a very regimented, restricted number of calories five consecutive days each month for three months. The team reported these individuals decreased their risk for cardiovascular disease, cancer, diabetes, and factors associated with aging. But again, implementing such a strict procedure for a full five days is going to be quite a challenge for most. And this was a very preliminary study, so future research could end up refuting these findings.

One final thing to note is fasting didn’t used to be all that unusual. Mark Mattson, a neuroscientist at the National Institute on Aging who practices intermittent fasting, tells The New York Times we should remember our ancestors weren’t able to maintain regimented eating habits, and things worked out just fine. Still, he also acknowledges the adjustment can be pretty rough for those accustomed to eating regularly throughout the day.

So should you try it? It really depends on the individual. Those who’ve dealt with eating disorders or need to pay specific attention to medical conditions, particularly diabetes, should consult a physician before shifting to something so drastic. If you’re in decent shape, have a healthy attitude toward food, and are looking to try something new, it could be worth it. But keep in mind, there isn’t necessarily one perfect diet for everyone.