5 Fresh Fall Foods That Are Packed With Protein

Fall wouldn’t be complete without totally embracing all of the amazing produce the season has to offer. Apples, pumpkin, butternut squash — autumn certainly boasts some belly-pleasing options. Plus, shopping in-season is one of the the best strategies for getting the freshest and healthiest produce. In fact, countless sources have shown that buying in-season is just as, if not more, important as opting for organic food. That’s because foods that are grown out of season require a lot more pesticides, waxes, and chemicals to make them appear more appealing to consumers, says mindbodygreen.

So shopping in-season will guarantee you’re getting a much cleaner product. Additionally, seasonal produce has the optimum amount of nutritional benefits, tastes superior, and is better for the environment. With all of these great bonuses, the only questions remaining should be: What produce do I choose? There’s certainly a wide-variety of nutrient-filled fall fruits and veggies — but if you’re looking to add some more protein-packed produce to your diet, here are your five best autumnal options.

These little green veggies may have once had a notoriously icky reputation, but they’ve recently made a comeback, both in the culinary and fitness spheres. And for good reason — just one cup packs four grams of protein! These sprouts are also a great source of potassium, vitamin K, folate, and iron. 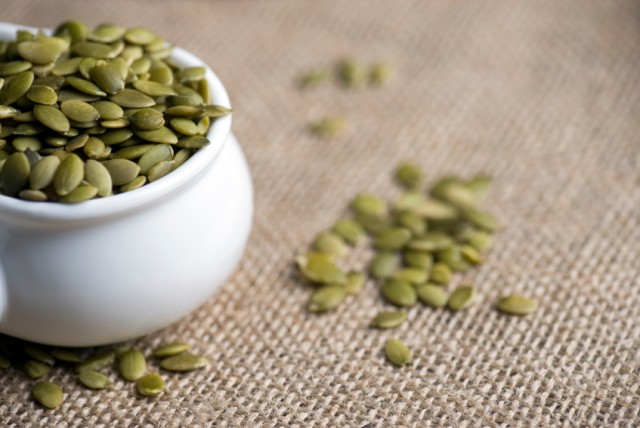 Pumpkin seeds in a bowl | iStock.com

When it comes to one of everyone’s favorite fall fruit (we’re talking about pumpkins, of course) it’s what’s on the inside that really counts. More specifically: pumpkin seeds. While the flesh of a pumpkin may be filled with potassium, fiber, and B vitamins — the seeds are the protein powerhouses. In fact they pack a whopping 7 grams of protein per ounce. So don’t toss out the seeds after carving a jack-o-lantern or prepping pumpkin pie! Instead, roast them in the oven and keep them on hand for a tasty snack.

These root vegetables may not be exactly filled to the brim with protein at approximately 1.6 g per cup. However, they made our list for one major reason: They’re especially rich in vitamin C, folate, and vitamin K which boost protein metabolism, according to Livestrong. In other words — in addition to their own supply of protein, they help your body optimally synthesize the nutrient.

We all know the importance of chowing down on dark-green veggies, and broccoli is no exception. While this veggie is actually in season year-round, broccoli is at its prime between October and April. And with nearly 6 grams of protein per cup, broccoli is a top-contender on our list.

Like Brussels sprouts, this veggie often gets a bad rap for lacking in the flavor department. Plus, after hearing so much talk on the importance of dark-leafy-greens, it makes you question: How nutritious could a pale-white piece of produce really be? The answer: very. Cauliflower contains a whole slew of health contents including vitamin C, manganese, potassium, omega-3 fatty acids, and all the vitamin Bs. And, most important to this list, it contains 2.28 g of protein per cooked cup!