From Stress to Big Macs: What Living Life Like Donald Trump Would Do to Your Body

It’s no secret and of little surprise that the U.S. is concerned what Donald Trump’s presidency will mean for our wellbeing. Americans’ health care, finances, and mental health are all at stake as the current POTUS navigates sensitive international relations, a divisive Congress, and the national debt.

We don’t always consider what the effects of the presidency may be for Trump, however, and it isn’t looking good for 71-year-old Donald. His diet, exercise, and mental health efforts aren’t admirable, in fact, they’re downright detrimental to his health. We looked at recent reports about Trump’s concerning lifestyle habits, as well as what it’d do to the average American to live like the president (page 7).

Inside aids revealed some concerning details about the POTUS’ health

Trump is known to fly off the handle. | Alex Wong/Getty Images

Corey Lewandowski, Trump’s campaign manager for a little over a year, co-authored a book with David Bossie, another top aide. In Let Trump Be Trump, the two show a crisis-ridden campaign wherein novice political aides “learn on the fly.”

Some of the scariest information that Lewandowski and Bossie reveal is how Trump’s personality will inexplicably shift. “The mode that he switches into when things aren’t going his way can feel like an all-out assault,” they write. While this is bad news for his aids, tendencies like this aren’t great for his health, either. Next, we explore what living like Trump would really do to your body.

Next: This tendency of Trump’s could kill the POTUS quicker.

Trump’s tendency to yell isn’t good for him

All that yelling is not good for Trump’s health. l Drew Angerer/Getty Images

“Trump screams at his top aides, who are subjected to expletive-filled tirades in which they get their ‘face ripped off,'” according to The Washington Post. Trump doesn’t just yell at his aids, however. He reportedly unleashes his wrath on Republican senators, the FBI, and his TV.

Not only is Trump the oldest president to enter the Oval Office, Newsweek reports his stressful habits could leave him looking and feeling significantly older when he leaves. Richard Browdie, president of the Benjamin Rose Institute on Aging, says that Trump’s anger could ultimately determine how quickly he ages. “Anger is also a health factor. [Trump] does strike me as being angry a lot, which is a powerful factor in aging.”

Next: This is what screaming like Trump would do to the average American. 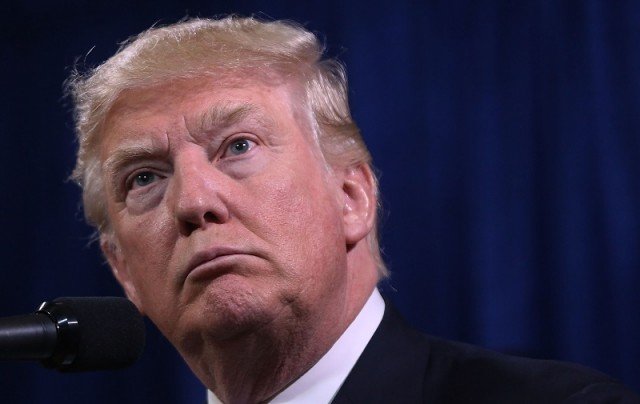 Trump’s anger is increasing his risk of a heart attack. | Spencer Platt/Getty Images

There’s a common notion that holding in your anger is bad for you, and expressing your rage is healthy. While there are elements of truth to this, it turns out that sudden bursts of anger or prolonged anger are worse for your health over time.

According to Psychology Today, anger eats away at your cardiovascular system, destroys your gut, and consumes the nervous system, often ruining your ability to think clearly. Anger is most physically damaging to your cardiac health. “In the two hours after an angry outburst, the chance of having a heart attack doubles,” said Chris Aiken, M.D., an instructor in clinical psychiatry at the Wake Forest University School of Medicine

Next: The president’s diet is the most concerning of all.

His McDonald’s consumption is out of control

Trump’s fast-food diet is a theme in general. According to Lewandowski, Trump Force One’s “four major food groups” included McDonald’s, Kentucky Fried Chicken, pizza, and Diet Coke. Trump’s McDonald’s fetish has also led him to make some questionable decisions. Lewandowski describes how Trump purposefully left behind staffer Sam Nunberg at a McDonald’s because his special-order burger was taking too long. “Leave him, let’s go,” Trump said … and they did.

Next: Here’s what eating like Trump will do to your body.

Eating McDonald’s consistently is — unsurprisingly — horrible for your health

McDonald’s should not be a staple in anyone’s diet. | Tim Boyle/Getty Images

Long gone are the days of Michelle Obama’s White House vegetable garden and Barack’s late-night almond snacking. While the former first family made commendable strides with public health and nutrition policies in the U.S., Trump’s fast food “diet” is nothing to emulate.

Whether or not Trump has ever bothered to watch Super Size Me, plenty of schools across America show the documentary, which reveals fast food’s harmful effect on your health. After eating only McDonald’s food for 30 days, Morgan Spurlock, a 32-year-old man, gained 25 pounds, experienced dangerously high cholesterol levels and fatty accumulations in his liver, and experienced mood swings, depression, heart palpitations, and sexual dysfunction. While Trump doesn’t eat an exclusively McDonald’s “diet,” his frequent order is a caloric nightmare that no nutritionist would recommend.

Next: Trump’s presidency is harmful to U.S. health as well.

Trump’s era of anxiety is actually hurting the U.S.

While we’ve escaped the threat of Trump Care (for now), it’s not the POTUS’ policies, but his actual presence that could be detrimental to America’s health. “The supercharged anxiety of the Trump Era is accelerating the vicious cycle of our current stress epidemic into overdrive,” Psychology Today stated.

Fear and uncertainty, the primary drivers of excess stress, are also two of the emotions Americans are feeling at high volume lately. According to the fourth annual Chapman University survey of American fears, corruption in the government tops the list in 2017. According to PT, when we perceive that we have no control, our stress system will go into overdrive. “The 2017 list of fears clearly reflects political unrest and uncertainty in the wake of Donald Trump’s election as president,” The Washington Post found.

Next: What living like Trump would ultimately do to your body.

You’d most likely be overweight and unhappy

You probably don’t want to be overweight and unhappy. | Andy Buchanan/AFP/GettyImages

Considering Trump thinks working out “will kill you,” according to Vox, we wouldn’t recommend following his regimen for a healthy lifestyle. If his fast-food preferences and apparent anger issues weren’t enough to deter you from living like Trump, let his views on exercise convince you instead: “Other than golf, he considers exercise misguided, arguing that a person, like a battery, is born with a finite amount of energy,” Evan Osnos wrote for The New Yorker.

Eating fast-food and letting anger spin out of control can have detrimental effects on your cardiovascular system and cholesterol, as well as decrease the state of your mental health. If you need to live like a Trump, we recommend Ivanka as the healthier choice.