12 Fruits and Vegetables You Should Always Buy Organic

Do you know what veggies and fruits you should buy organic? | iStock.com/Elenathewise

You’ve probably been there before. Standing in front of the organic produce section at your grocery store, you’ve eyed the noticeably smaller fruits and vegetables that are somehow double the price of the non-organic options just a few steps away. Unless you’re a true health nut (with some extra cash), chances are you turn around and throw some non-organic, more affordable produce into your cart before moving on. You may pat yourself on the back for even straying into the produce section at all considering that the processed foods you find in the middle aisles of the store are significantly cheaper.

While fresh produce is always a better choice than Cheetos, syrupy canned fruit, and frozen TV dinners, the trouble with conventional produce is that it’s grown using harmful pesticides. A pesticide can be a naturally derived or synthetically produced substance that is used to control insects, bacteria, fungus, mold, and rodents that can ruin a harvest of fruit or veggies. The National Pesticide Information Center states that they can also extend the shelf life of some foods, which is why those apples on the table can be grown in Chile, shipped to your grocery store in Kansas, and still taste fresh. The pesticides wear off as the produce is shipped, exposed to light, washed, and prepared, but there is often still a pesticide residue, which can have health risks associated with it.

This is why when it comes to fresh produce, it pays to understand what items you can buy non-organic and not worry about (called the “Clean 15”) and what fruits and vegetables are worth the organic mark-up. CNN reports that the U.S. Department of Agriculture (USDA) runs tests to measure the pesticide residue on the produce you buy. Based on these tests, the Environmental Working Group (EWG), an environmental activist group, puts together an annual “Dirty Dozen” list of the produce that has the most pesticide residue based on data from the USDA. For the past five years, apples have topped the charts on produce with the highest pesticide levels. Here’s a ranking of what the EWG is reporting for 2016.

Make sure to buy your cucumbers organic | iStock.com

Insects can be a major problem in cucumber production. The veggies are susceptible to beetles, aphids, cutworms, and mites. To protect the cucumbers from bugs and disease, pesticides are used. To make matters worse, these pesticides are “restricted use pesticides” and require a pesticide license to purchase, says Penn State College of Agricultural Sciences.

Cherry tomatoes are sensitive to plant disease, making pesticides a must. Because their protective layer is so thin, tomatoes often test positive for multiple pesticides that can be dangerous to your health, says MyDx.

Bell peppers are sprayed with an array of pesticides | iStock.com

Those delicious bell peppers you toss on your salad or stuff with couscous and cheese are sprayed with a combination of up to 50 different pesticides, including methyl bromide. 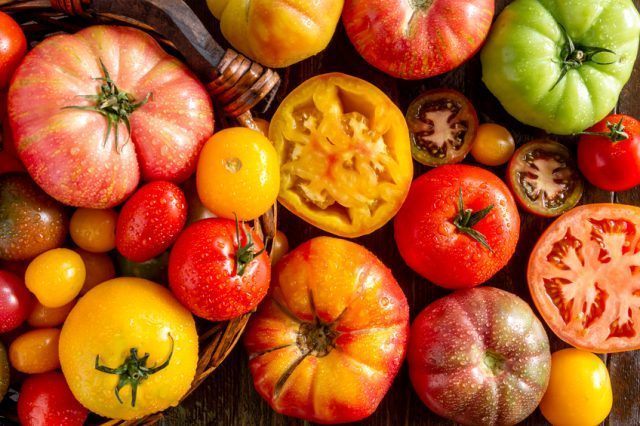 Regular tomatoes are heavily sprayed with pesticides, too | iStock.com

Like their cousin the cherry tomato, regular tomatoes report high levels of pesticide residue because of their thin protective layer, What’s On My Food? states. It’s reported that these veggies’ pesticide count includes 12 suspected hormone disruptors.

Those tiny bugs called aphids love spinach, so farmers have to go to extreme efforts to protect their crop. Spinach tests positive for an ample number of pesticides, including organophosphates and hormone disruptors.

Make sure you wash your cherries before you eat them | iStock.com

When cherry season rolls around, you may be so excited that you start munching before you even wash the fruit. This is a big no-no considering that cherries come in at number seven in the EWG’s Dirty Dozen.

Grapes may contain hormone disrupters from the pesticides | iStock.com

Take the time to wash (and even rewash) your grapes. This delicious fruit contains carcinogens, suspected hormone disruptors, and neurotoxins.

Celery absorbs water through its roots, so any toxic chemicals in the soil are sucked up through the plant and passed along to you. Over 80% of celery in stores contains pesticide residue.

Pests love the sweet taste of peaches, which is why they’re doused in pesticides | iStock.com

Pests love the sweet taste of peaches as much as you do, so farmers have to offset this by using toxic chemicals like endosulfan, a pesticide that has been linked to birth defects.

Like peaches, nectarines have to battle the bugs to remain in one piece. The fruit contains a large number of pesticide residues including formetanate hydrochloride, which shows up over 53% of the time.

Make sure to buy your apples organic | iStock.com

For years, apples have been the highest pesticide-ridden fruit. In 2016, the fruit slid to number two, but reports still state that over 99% of apples test positive for at least one pesticide residue.

Strawberries are the “dirtiest” fruit on the list | iStock.com

American’s eat nearly eight pounds of fresh strawberries a year. This delicious fruit contains pesticide residue with chemicals that have been linked to cancer and reproductive damage. In fact, the chemicals used to grow strawberries are banned in Europe.