15 Genius Health Inventions None of Us Could Live Without

The medical world has come a long way, and people are living longer now than ever before. The common headache doesn’t stand a chance against modern medicine. And it’s less likely a child will die from a common virus like chickenpox thanks to the development of vaccines. These are just a couple examples of how we’ve benefited from major medical treatments and medicine, but there are so many more. Here are 15 inventions we really couldn’t live without.

Cancer sucks, there’s no other way to put it. But thankfully, treatments have come a long way. It all started during World War II. “The U.S. military was researching a number of chemicals related to mustard gas when researchers came across the compound nitrogen mustard — which was found to work against cancer of the lymph nodes,” CNN writes. “It was used as a model for other cancer medicines, jump-starting the development of chemotherapy.”

The stethoscope is a simple, yet incredible invention. | iStock.com

Everyone’s familiar with the stethoscope. Even if you’ve never had any respiratory problems, you’ve seen this staple around your doctor’s neck. So, how did this wondrous product make its debut? In 1816, a French doctor named Rene Theophile Hyacinthe Laënnec came up with the stethoscope as a better way to listen to a person’s heart and breathing. The American Diagnostic Corporation says a doctor had to physically put his or her ear up to a patient’s chest prior to that. Clearly, a lot can be missed using this technique, not to mention it was probably fairly awkward for both parties.

Thermometers can let you know when it’s time to see the doc. | iStock.com/IPGGutenbergUKLtd

The thermometer underwent centuries of trial and error by many different inventors before reaching the product we use today — and it’s a product we need. The thermometer is a staple in determining just how sick a person is at any given time. Exceed a hallmark number on the scale, and a hospital visit could be in order. Furthermore, we can credit a couple folks with this handy device. According to ThoughtCo, the first modern thermometer was invented by Daniel Gabriel Fahrenheit in 1714. Fast forward to 1876, and the world has its first way of measuring a person’s temperature, thanks to English physician Sir Thomas Allbutt.

Thankfully, patients can be totally knocked out during surgery. | iStock.com

Even if you’ve never been completely knocked out, chances are you’ve had some sort of anesthesia in your lifetime. Having a root canal or getting wisdom teeth pulled usually calls for localized numbing of the area. And yes, even this falls into the category of anesthesia. According to WebMD, “Anesthesia is a way to control pain during a surgery or procedure by using medicine called anesthetics. It can help control your breathing, blood pressure, blood flow, and heart rate and rhythm.” Without it, most surgeries would be unbearable.

Ultrasounds can detect a baby’s gender, along with other possible issues. | iStock.com/tamaravidmar

Ultrasounds are commonly associated with pregnant women trying to determine the sex of their unborn baby, along with examining developmental progress of the fetus. Even potential brain problems and the baby’s position can all be seen during an ultrasound. RadiologyInfo.org also mentions, “It’s also used to help guide biopsies, diagnose heart conditions, and assess damage after a heart attack.”

When your vision starts to go, eyeglasses can help. | iStock.com

Where would we be without the simple, yet genius, invention of glasses? With the number of folks who depend on them, it’s hard to imagine them not existing. Especially as we get older, eyesight can become problematic. Thankfully, though, there’s a bevy of solutions to help counteract the loss of vision. If you’re interested in the history of the invention, check out the American Academy of Ophthalmology’s timeline of eyeglasses.

An x-ray can show any broken bones. | iStock.com/DragonImages

X-rays serve a great purpose in the medical world. They help diagnose broken bones, and can even save your life. “The most familiar use of X-rays is checking for broken bones, but X-rays are also used in other ways,” MedlinePlus says. “For example, chest X-rays can spot pneumonia. Mammograms use X-rays to look for breast cancer.” By taking images of the inside of your body, doctors are able to detect certain health problems that may not be apparent otherwise.

There are lots of birth control options today. | iStock.com

There are lots of forms of contraception these days. Fortunately, we have our choice of birth control pills, permanent birth control options, condoms, IUDs, and more. But that wasn’t always the case. The first forms of contraception were introduced in the 1800s, but not without great controversy. Women’s Health discusses the trials and tribulations that early developers dealt with, including nasty side effects.

Before the days of pads and tampons, dealing with your period was even worse. | iStock.com

Despite the progress we’ve made elsewhere, there still seems to be a massive stigma around menstruation. Although period-shaming shouldn’t be a worry any woman has to endure, at least we can be thankful for the options that exist today. In 1920, pads came to market, and in 1931, the tampon. But it hasn’t always been this easy, as Women’s Health explains in this brutal period product timeline.

Diabetics no longer have to depend on doctors sticking them with needles. | iStock.com

These products are essential for people whose bodies are not able to regulate insulin on their own. Diabetics can safely rely on the information and insulin provided by the use of personal monitoring devices and pumps. This is especially true for people who have type 2 diabetes, since they either lack insulin or can’t use insulin efficiently, PubMed Health says. People who have type 1 diabetes need even more help getting insulin. Thankfully, there’s an FDA approved automated insulin delivery device, which doesn’t require much work on the part of the individual.

High blood pressure can be managed, so long as you know you have it. | iStock.com

High blood pressure is nothing to take lightly, as it can lead to a slew of serious health problems. According to the American Heart Association, about 85 million Americans have high blood pressure. And the only way to know for sure is by having your blood pressure checked. While this is probably done whenever you visit the doctor, that’s only a snapshot at one moment in time.

If you consistently have high blood pressure, your doctor might suggest getting an at-home monitor so you can keep a daily record. If your numbers are not where they should be, you may need to make some lifestyle changes, or even begin taking medication. Without the ability to monitor a person’s blood pressure, there could be a greater risk for heart problems down the road.

Pain relief is truly a thing of wonder. And while we’ve already discussed the incredible power of anesthesia, over-the-counter options aren’t far behind in terms of helpful solutions. According to Drugs.com, aspirin works by “reducing substances in the body that cause pain, fever, and inflammation.” Although it’s not as strong as prescription medication, aspirin still serves as an effective pain reliever. Just think about how many times you’ve relied on popping an aspirin to get rid of a headache, or to ease painful menstrual cramps.

Much like vaccines, antibiotics really do help in staving off serious consequences. These prescription meds are used to treat common illnesses, diseases, and infections, such as STDs. But as much as we rely on them today, the discovery of antibiotics was actually an accident.

According to ABC News, Sir Alexander Fleming stumbled upon antibiotics in 1928. “Today, antibiotics are used to treat a plethora of bacterial illnesses,” the publication reports. “And today, researchers are developing antivirals — most notably, the AIDS-fighting antiviral AZT — to deal with a host of viral illnesses as well.” The powers of antibiotics are truly undeniable.

Pacemakers allow lots of people with heart problems to live long, full lives. Helping your heart beat more regularly than it does on its own, a pacemaker is a small device implanted under a person’s skin on the chest. It sits just under the collarbone and is implanted by a doctor, according to the American Heart Association. Tiny wires are hooked up to the heart, enabling the proper flow of blood and oxygen. 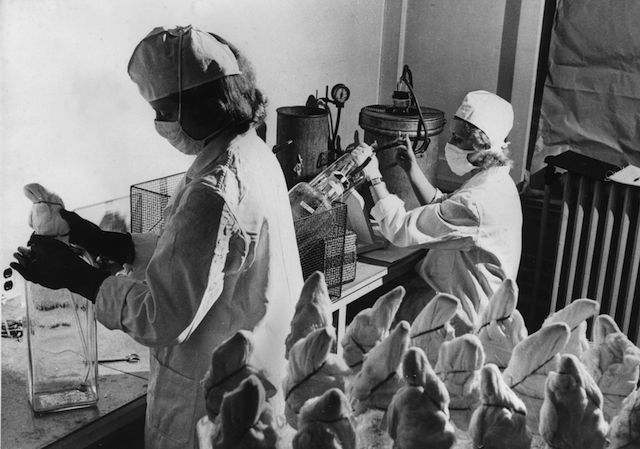 Whether you believe in getting your child vaccinated or not, vaccines have saved too many lives to not make our list. Vaccines build up immunity to protect against diseases, including chickenpox, the flu, HPV, and whooping cough, to name a few. And according to Vaccines.gov, “We have record or near-record low levels of vaccine-preventable diseases in the United States, but that does not mean these diseases have disappeared.” For this reason, it’s important parents stay on top of getting their children vaccinated as recommended by their doctors.

It’s no stretch to say we owe a great deal of gratitude to the pioneers who researched, developed, and stumbled upon today’s best health inventions. We’d be lost without them.