Celebrities live crazy lives, especially when they’re young and in love. And there are few whirlwind romances that move as quickly as Ariana Grande’s and Pete Davidson’s. The singer and comedian first seemed to confirm their relationship via social media on May 30. And now they’re everywhere, as it appears they’re now engaged.

Getting engaged after dating for just three weeks is intense — but it’s not even the craziest part. Here’s the shocking truth behind how much the ring costs (page 6) and when everyone thinks Pete bought it (page 7). 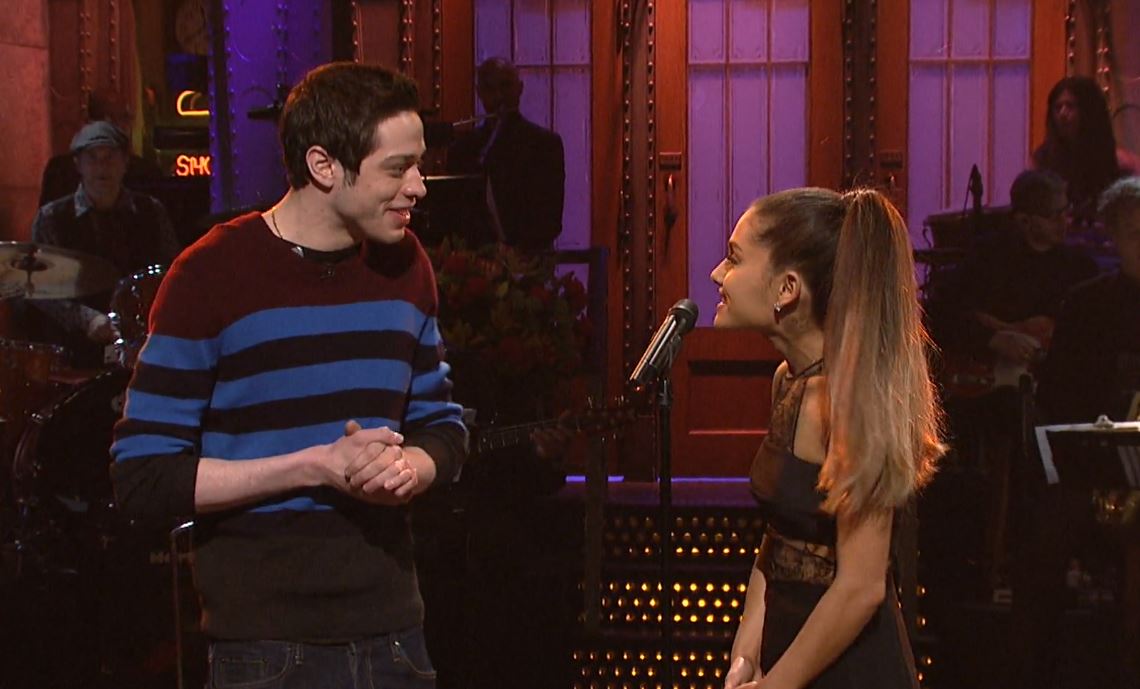 It wasn’t long ago when it was reported that Ariana was “casually dating” Pete. No matter what’s going on, we can’t forget when they first met. Elle reports they met on the set of Saturday Night Live in March 2016. At the time, they were both dating other celebrities — so to our knowledge, nothing was going on. But the nature of their breakups makes us suspect there’s more to the story than we know.

Next: Ariana kickstarted the (short) dating saga with her breakup from this celebrity.

2. They started dating after Ariana’s recent breakup with Mac Miller Rapper and producer Mac Miller started dating Ariana shortly after they released their breakout song, “The Way,” together. And they dated for two years until parting ways, Billboard explains. Mac Miller even called her “the greatest person in the world” at one point.

It didn’t last, however, as Mac’s run-ins with the law seemingly became too much for the pop star. She maintains they’re still friends, however. And we’re wondering what he thinks about her engagement so soon after their breakup.

Next: Pete also recently got out of a long-term relationship.

3. Pete broke up with comedian Cazzie David — and covered his tattoo of her face 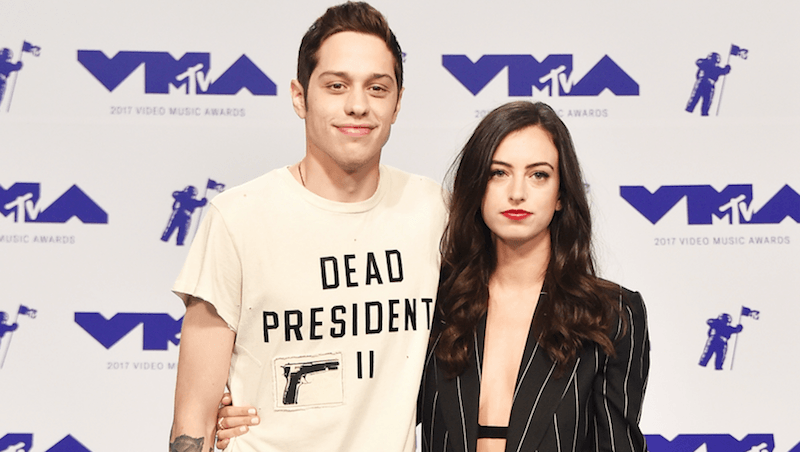 Davidson and David split in May. | Frazer Harrison/Getty Images

You probably know Cazzie David best for her comedian father, Larry David. But now, Cazzie’s thrust into the spotlight thanks to her recent breakup with Pete, whom she dated on and off for two years. In 2016, Pete even opened up to People and told interviewers he loved Cazzie “very, very much.” After their breakup in May, however, he noted that “she’ll be great and she’ll be fine.”

We’re not sure where the two stand now. But it appears Pete may have covered up the tattoo he had of her face, too.

Next: His tattoos say it all. Out with the old and in with the new, it seems. Cazzie David’s face may no longer be featured on Pete’s arm, but it seems he’s not scared of getting some ink dedicated to Ariana. Here, we see he got the same black bunny ear mask featured on Ariana’s album cover for “Dangerous Woman” tattooed on his neck. There are also reports that Pete has Ariana’s initials tattoed on his hand.

Cosmopolitan reports the two may have matching cloud tattoos as well, which proves Ariana is just as committed as Pete is.

Next: How long has Ariana really been sporting that ring?

5. Everyone noticed Ariana’s new bling on her ring finger Is she showing off an engagement ring? | frankiejgrande via Instagram

Now that eagle-eyed fans have spotted something sparkly on Ariana’s ring finger, everyone’s trying to figure out just how long it’s been there. A photo posted by Ariana’s half-brother on Instagram shows the starlet sporting the ring on June 11 during a trip to Disneyland. In reality, however, it seems she may have been wearing the rock since Wango Tango on June 2, Elle reports.

Either way, an engagement within less than a month of dating is crazy talk. But that’s not even the most insane part.

Next: Here are the details on the extravagant ring. It seems Pete shelled out a massive amount of money for the ring, according to TMZ. The diamond-shaped rock was custom made and reportedly cost $93,000. Sources close to the couple claim the piece was commissioned by Greg Yuna, a jeweler based out of New York City.

Vanity Fair notes the jeweler calls himself “Mr. Flawless,” and after taking a sneak peek at the 3.03-carat diamond ring that’s set in platinum, we totally get it.

Next: Did Pete really buy Ariana’s engagement ring after just this length of time?

7. Many suspect Pete bought Ariana’s engagement ring after just one week of dating her 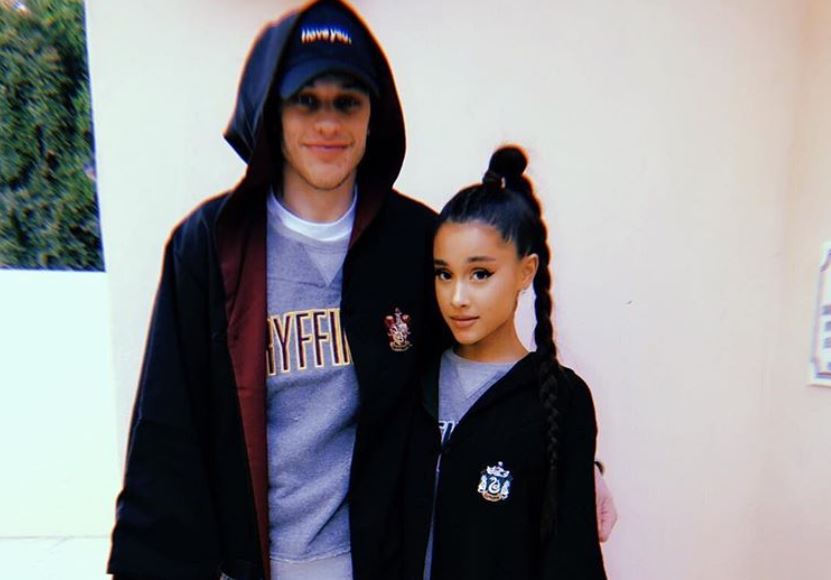 Puppy love or the real deal? | Pete Davidson via Instagram

An engagement within three weeks is extreme, but buying a ring after one week seems like the puppy love has gone way too far. While Ariana may have received the ring after nearly a month of dating Pete, Yahoo reports the custom ring took two weeks to complete. That means Pete must have had marriage on the brain right off the bat.

From the way Ariana’s flaunting the ring, though, perhaps she was also totally into it from day one, too. We’ll have to wait and see what happens next.

Next: The reactions from Pete Davidson’s exes are priceless.

8. Pete’s exes are reacting to the news People reports stand-up comedian Carly Aquilino, another one of Pete’s exes, added a screenshot of a text conversation she had with a friend that was seemingly about the news. She took the screenshot down, but it showed her friend texting her, “I know I’m the 9 billionth person to text you today about this, but … I can’t.” To that, Carly responded with “HAHA” multiple times in all capital letters.

As for Cazzie David, she posted an Instagram photo of her drinking wine with the caption, “Came to wine country a person, leaving a human bottle of wine.”

Next: Some think the engagement is one huge sham.

9. Could the whole engagement be one huge ruse? Fan reactions to the engagement. | Advent Grande via Twitter

Ariana and Pete have yet to admit that they’re engaged, which is really making fans wonder what’s going on. Many also suspect the whole thing is just one unsubstantiated rumor after another that Ariana is allowing because of her upcoming album, Glamour notes.

As one fan on Twitter notes, “I think the actual ring is square not a teardrop shape like that. she’s been wearing that ring for too long.” Another Twitter user muses, “ok but imagine if this was a joke this whole time.” We’re starting to wonder how likely this possibility really is.