Do you know the truth behind these trendy health foods? | iStock.com

There’s more research dedicated to nutrition than ever before, yet we might be more confused about what’s healthy than we were several decades ago. The New York Times reveals despite a drastic increase in the number of articles dedicated to obesity since the 1960s, the number of Americans who fall into the severely overweight category has tripled since that time. New studies come out all the time, which constantly changes what we think we know. Consider how our attitude toward cholesterol has completely reversed from a few decades ago.

Fat is a particularly interesting example that illustrates our shifting ideas about nutrition. During the 1990s nobody wanted a pat of butter or slick of oil to come near their food. NPR describes the hysteria, saying “foods with little or no fat were flying off the shelves.” The real moment of excitement came when Frito-Lay introduced WOW! potato chips. Time explains the crunchy snacks were made with a fat-free substitute for fat called Olestra. To most people, that meant the ability to chow down on chips without any of the guilt. The article went on to say the excitement quickly evaporated when people started experiencing terrible digestive problems.

It’s difficult enough figuring out how to incorporate traditional foods into our diets, and introducing new ingredients to the mix makes matters even more confusing. But how do you know what to believe and what to blow off? In an effort to help you make the best choices, we’ve highlighted popular ingredients showing up on healthy cooking blogs and other recipe sources. As for whether or not to work these foods into your menu, we’ll leave that up to you.

Matcha is one of the most popular health food ingredients — but should you use it? | iStock.com

If you thought green tea was the latest trend when it came to brewed beverages, it’s time to familiarize yourself with matcha. Yes, it’s still tea, but it’s made from leaves that are dried and ground to a fine powder as opposed to a bag that you steep in hot water. Health explains drinking matcha provides a better source of nutrients than traditional tea because you’re actually ingesting the leaves. It offers some vitamins, but it’s mostly touted for high levels of antioxidants. The article also mentions the amount of caffeine is pretty comparable to a cup of coffee.

Don’t think it’s just yogis jumping on the bandwagon, because Bodybuilding.com highlights eight reasons you’ll go nuts for the beverage. The article cites the tea’s potential to fight cancer, aid in weight loss, and boost brain power as highlights. Still, it’s important to remember not every study is reliable, and there are some potential downsides to downing too much of the green stuff. Food Network notes the leaves usually contain lead, so it’s not wise to have more than one beverage per day.

Another important consideration before you start loading up on this popular powder: taste. It’s sort of tough to nail down the exact flavor profile, but the Los Angeles Times says matcha is frequently compared to watercress, spinach, grass, and seaweed. The flavor tends to lean toward bitter, which explains why it’s often accompanied by sugar. But you might want to give it a taste before whipping up a batch of tea-infused frosting. 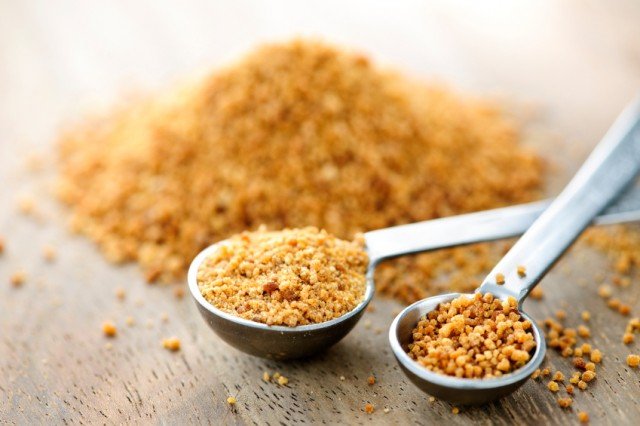 Coconut sugar is trendy with the health-conscious right now. | iStock.com

Things were a lot simpler when sugar was just sugar. These days, the sweet stuff goes by so many different names that it can make your head spin. Corn syrup and refined white sugar are probably the most common, but there are plenty of alternatives. Honey, maple syrup, cane sugar, date sugar, and agave have gotten plenty of love from health nuts thanks to small levels of minerals and other nutritional benefits. Take honey, for example. Everyday Health reports the sweetener has anti-bacterial and anti-inflammatory properties. But keep in mind, it’s still sugar.

In addition, coconut sugar has gained popularity among food bloggers. Time explains the sweetener is made from the boiled, dehydrated sap of coconut trees. The article went on the say it has a richer flavor than regular syrup, more similar to maple syrup. While that could be delicious in certain baked goods, it might make for a strange tasting glass of lemonade.

As for nutrition, coconut sugar doesn’t have quite as many nutrients as many would have you believe. Livestrong explains the alternative sweetener contains only trace amounts of vitamins and minerals but acknowledges it has less of an impact on blood sugar than the white stuff. Coconut sugar might be a good choice for those with diabetes, but you’re not going to cure any diseases with the stuff. 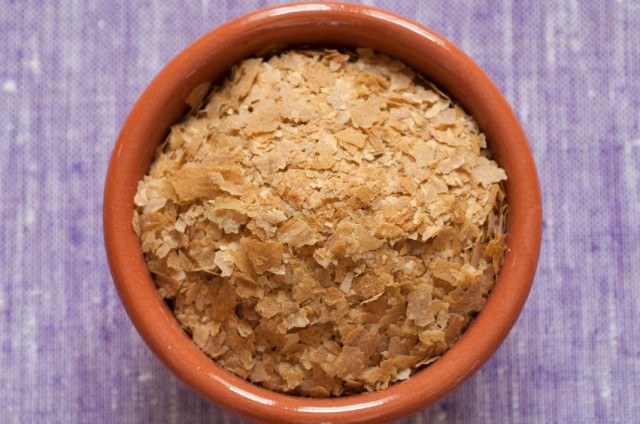 Use nutritional yeast as a flavor enhancer for your meals. | iStock.com

Don’t confuse this ingredient with the living organisms used to brew beer and give your bread lift. According to Philadelphia Magazine, nutritional yeast grows on sugar cane and molasses. Once harvested, it’s deactivated with heat, washed, and dried. Though the name doesn’t exactly inspire salivation, just about everyone who’s tried it loves the flavor. Vegans have long used the flakes as a substitute for the cheese they no longer eat, but plenty of food professionals love it just as much. Epicurious praises the ingredient for its savory flavor and recommends adding a sprinkle to everything from a bowl of macaroni and cheese to roasted vegetables.

The name also hints at some notable health benefits. The Huffington Post reports nutritional yeast is a great source of protein and B vitamins. Unlike many other savory flavorings, it’s low in sodium and fat. And since it’s such a potent flavor, you only need a sprinkle to add a serious flavor boost to your food. If you can get past the gross name, this is one healthy ingredient you might want to consider.

Chia seeds can be made into some pretty delicious dishes. | iStock.com

Once used to grow a leafy green coat on a cute animal figurine, chia seeds have become one of the darlings among health-food fiends. Their unique ability to gel once moistened has led to a boom in recipes for “chia pudding.” Once added to the liquid of your choice, the seeds swell to create a thick, spoonable texture that many like for breakfast. That sponge-like ability could be good for more than just creating a tasty meal, though. Fleet Feet St. Louis says the seeds help regulate fluid in the body and retain electrolytes, so they could keep you hydrated during an intense workout.

The seeds are no slackers when it comes to nutrition, either. The San Francisco Chronicle reveals chia seeds offer plenty of omega-3s, protein, fiber, and minerals. And since the flavor is so mild, they can easily be worked into tons of different foods. Men’s Fitness suggests adding a sprinkle to oatmeal and smoothies.

Before you start eating this ingredient by the handful, keep the calorie count in mind. WebMD says two tablespoons contain 139 calories, so you can easily go overboard with serving sizes. Putting on a few pounds might be the least of your worries, though. Time reports one man ended up in the emergency room after the seeds swelled inside his throat, causing a blockage. While most people won’t have issues, just be sure you let seeds expand fully before ingesting them.

Liquid coconut aminos are great for those looking for a soy sauce alternative. | iStock.com

Soy sauce packs a salty, rich punch to any sauce or marinade. But it’s a no-go for folks sticking to a gluten-free or Paleo diet. In an effort to get the same taste, many have turned to coconut aminos. The liquid is made from coconut sap and sea salt, explains About Food, so it works for just about any diet. The ingredient is also just as easy to use as soy sauce, so you can easily substitute. The Kitchn says even those without dietary restrictions might want to give the ingredient a shot because it’s much lower in sodium than the Asian-food favorite.

Despite the condiment’s popularity, there’s little to suggest it’s a healthy ingredient. And Breaking Muscle says, while tasty, coconut aminos don’t quite match the flavor of soy sauce. If you love the taste of soy and have no dietary restrictions, there’s really no need to replace it.

Spirulina is a type of algae that’s popular with the smoothie crowd. | iStock.com

The smoothie crowd is so over getting that green hue from kale. They’re turning to a type of algae called spirulina to supercharge their beverages these days. Bon Appétit reports the sea plant is harvested with stainless-steel screens, washed, dried, and then pulverized into a powder that you can add to just about any food. The article went on to say the trendy ingredient packs plenty of protein, iron, and antioxidants, so it’s a no-brainer for giving your morning beverage a boost. It could be beneficial for athletes as well. SFGate reports findings from a study that suggest consuming the algae can increase performance and boost metabolism.

You might not want to start dumping it into everything you eat for a few reasons, though. Bon Appétit says spirulina can turn beverages a shockingly dark shade. There’s also flavor to consider. Not surprisingly, Boston Magazine says it tastes like algae. While some love that flavor, just as many find it pretty off-putting.

Despite the health benefits, spirulina carries a few risks. The University of Maryland Medical Center explains because it grows in water, the algae can easily become contaminated with toxic substances. Additionally, it could worsen conditions for those suffering from autoimmune diseases like multiple sclerosis. If you decide you’d like to give it a shot, be sure you’re purchasing it from a reputable source.