10 Healthy Snacks Celebrities Swear By to Keep Their Figure

Want in on the best afternoon nibbles? Here’s a look at the healthy snacks celebrities swear by to stay in shape. (Warning: Angelina Jolie’s snack on page 10 will shock you. Proceed with caution.)

The avid foodie packs her cookbooks with all sorts of decadent dishes and admits to snarfing down Doritos after a photo shoot. But when it comes to eating right, Teigen reaches for a jar of pickled peppers. “They’re my go-to,” she tells Delish. “I put them in certain dishes, like tuna casserole, when I want that crunchy bite of heat, but I mainly just munch on them.”

Next: Allow this “friend” to tell you her favorite snack …

The Friends alum gave People an inside look at her daily eating habits back in 2016. Her go-to snack? Grabbing a hard-boiled egg for a mid-morning boost. “I’ll have one a few hours after I have my shake,” she says. And that’s smart, as one egg has about 7 grams of protein, which can help you stay full and give you fuel to last until lunchtime.

Next: An unconventional snack … 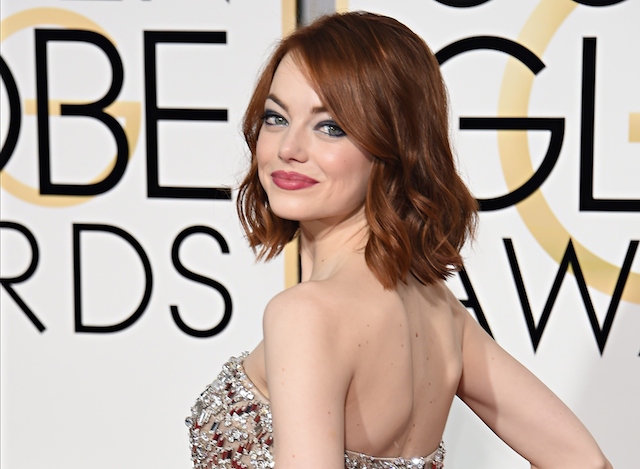 In an interview with Vogue, the La La Land actress revealed her food do’s and don’ts. On her list of favorite foods, Stone reveals that Brussels sprouts are a must, which is great considering all the vitamins and nutrients this veggie packs into each little green bulb. She says her other favorite snack is french fries, but she doesn’t necessarily eat them at the same time.

Next: A great post-workout snack …

Heck, who wouldn’t aspire to have Julianne Hough’s incredible figure? The Dancing With The Stars alum has a crazy workout regimen, but she also eats well. That includes her favorite go-to snack — a smoothie chock-full of fruit, almonds, and Greek yogurt. Health.com recommends having this snack if you have a long stretch between meals. The site cautions: “It might be too heavy of a snack if you sip it too close to a main meal, or for someone who is less active.”

Next: Here’s a snack you’ll surely try at home …

No, we’re not talking about the butter-laden movie theater variety. Health.com reveals the actress-mom-mogul is a fan of topping this low-calorie snack with coconut oil and Himalayan sea salt. (But the website recommends swapping the salt for black pepper to prevent water retention and bloating while you snack.)

Next: You may already have this snack in your fridge …

Apparently, this fun pull-apart snack can always be found in the Kardashian West refrigerator. “String cheese is one of my all-time fave healthy snacks since it is filled with protein and calcium,” the reality TV star tells People. “I love to eat it with sliced turkey. It’s also the perfect on-the-go snack!”

Next: Who knew this singer has a healthy snack go-to?

Yes, the pop star has an obsession with Cheetos, which are certainly not a healthy snack choice. However, Gomez reveals to Bon Appetit that she keeps things “pretty simple” when it comes to stocking up the backstage area at her shows. That includes pickles, which are packed with vitamins and fiber. “Plenty of water and pickles,” she tells the publication.

Next: A familiar fruit with a tangy twist …

But not just any old slice of watermelon. Duff reveals via Twitter that her go-to snack is watermelon sprinkled with Tajin and lime. While this is an excellent snack choice, those watching their sugar intake should try this with caution. “Stick to one cup and add a source of healthy fat or protein, like a quarter cup of pumpkin seeds, to blunt that effect,” dietitian Cynthia Sass tells Health.com.

Next: This snack may sound weird, but it’s reportedly great for you …

You may not believe the slender Spice Girl snacks on anything at all! In fact, Victoria Beckham enjoys munching on bladderwrack, which she insists is one of her keys to staying slim. This seaweed is also a superfood known for its anti-aging properties, and it can be ingested in tea form.

OK, so whether eating bugs is actually a smart choice is debatable. But Angelina Jolie swears by eating crickets for their protein and ability to lower cholesterol. She also claims her kids enjoy eating them, too. “They can eat a bag of crickets like a bag of chips,” she tells BBC. To each their own healthy snack, we guess.