Heart Disease, Cancer, and Other ‘Human’ Diseases You Had No Idea Your Dog Could Get

We know for most, dogs aren’t just pets — they’re family members. And you’ve probably followed your vet’s instructions to ensure the health, safety, and happiness of your pooch. Unfortunately, no matter how excellent your dog’s diet is or how often you make sure your pet gets plenty of exercise, they can fall ill. And it’ll surprise you to know just how many “human diseases” can actually affect your pet, too.

Yes, your dog can really experience renal failure, too. WebMD explains canines can experience serious illness if their kidneys fail to properly filter out bodily waste, as this can cause toxic build-up in the blood. It’s also common for a dog’s kidneys to fail if they consume toxins like antifreeze, tainted foods, or certain medications.

If you have an older dog and their kidneys are starting to fail, this is also generally a sign of age. Like in humans, chronic kidney disease can develop slowly over time until it becomes deadly.

According to Pet Health Network, roughly 7.8 million dogs in the U.S. have heart disease, which is about 10% of all canines in the country. The publication reminds us that heart disease is nearly as common in dogs as it is in humans. Small breed dogs over 5 years old are the most susceptible to valvular disease, which is the most common type of heart issue canines face.

It’s also important to note how diet comes into play. The Japan Times reports dog food that contains legumes is now linked to heart disease. The U.S. Food and Drug Administration received reports of certain canines having enlarged and weakened hearts after eating food that had legumes or potatoes as the main ingredient. 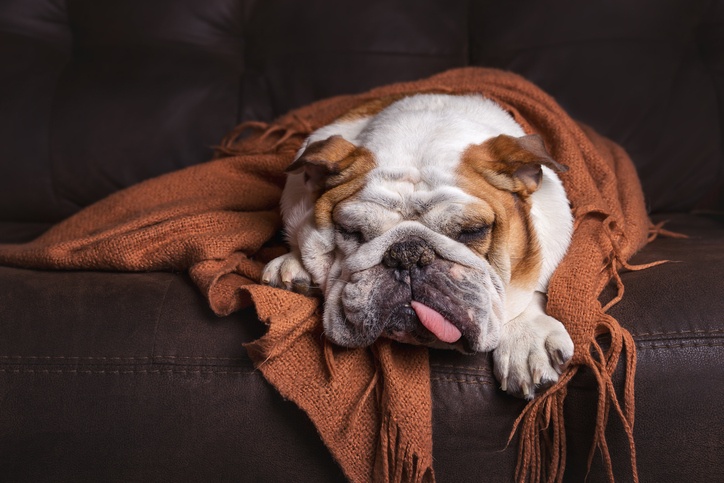 You know how serious Lyme disease can be in humans — and it can also seriously hurt your dog, too. As you know, Lyme is one of the most common diseases spread by ticks. If your dog frequents the outdoors, it’s a good idea to check them for ticks before they re-enter your home.

While it can be hard to tell if your dog has contracted Lyme, PetMD notes the disease can cause inflammation in the joints, resulting in lameness. You may also notice your dog’s joints are swollen or stiff, too. Also, if your dog is experiencing kidney problems, this could be the result of Lyme. Vomiting, diarrhea, and lack of appetite are all signs the kidneys are failing, so ask your vet to check for Lyme, too.

WebMD notes cancer is the leading cause of death in dogs over 10 years old, but there is some good news: About half of these cancers are curable if they’re found early on. As for types of cancer dogs can develop, veterinarians see malignant lymphoma (tumors in the lymph nodes), skin cancer, and even breast cancer.

When it comes to warning signs, they’re actually quite similar in both dogs and humans. Unusual lumps, wounds that don’t heal, swelling in the bones or joints, and abnormal bleeding are all signs something serious is amiss. And there are plenty of instances when cancer shows no signs or symptoms at all, particularly in the early stages.

Just like humans, dogs can develop diabetes, too. WebMD explains some canines have an inadequate response to insulin, which can cause elevated blood sugar levels. And like with people, untreated diabetes can lead to a wealth of serious issues.

Here’s the difference between diabetes in dogs and humans, though: It’s more common for dogs to have Type 1 diabetes, while people often develop Type 2 from an unhealthy lifestyle or genetic factors. As for types more prone to this disease, researchers believe female or obese dogs are at a higher risk, as are Australian terriers, schnauzers, dachshunds, poodles, Keeshonds, and Samoyeds.

Like in people, arthritis can plague dogs as they age. The Bark explains the cartilage on your dog’s joints wears thin as they get older, causing inflammation, excessive joint fluid, and bony growths in some cases. Eventually, degenerative arthritis can set in, resulting in pain, limb disuse, and muscle atrophy.

While you can’t necessarily stop arthritis, you can make life easier for your dog around the home. The publication recommends giving muscle massages to your pup, as well as giving them extra padding in their bedding area for comfort. There are also supplements that can help promote healthy bones and cartilage.

Both you and your dog can experience upper respiratory infections during flu season. ABC News reports the U.S. recognized canine influenza in 2015 — and since then, dogs in nearly every state have been infected. The strain that could affect your pup is different than the one that you would catch, however. But if your canine is frequently around other dogs, keep in mind that it’s spread through close contact.

If you notice your dog is coughing, sneezing, eating less, or experiencing eye discharge, these are all signs. Good nutrition and rest should get your pup back to optimal health in no time.