In light of recent tragedies, gun violence is more talked about than ever. However, if it hasn’t affected you personally, it could be hard to understand how serious it actually is. We broke down some statistics on gun violence in the United States, plus compared the U.S. gun violence issues with those of other countries to better convey the problem.

Eighteen school campuses experienced gun violence in the first 45 days of 2018. Eight of the events resulted in injury or death of at least one person. 2017 was deemed the deadliest year for mass shootings in modern U.S. history, with events occurring at a Las Vegas concert, a Texas church, and a Florida airport, to name a few. A “mass shooting” is defined by the Gun Violence Archive as four or more people shot in one incident, not including the shooter.

Next: This tragic event caused 17 fatalities.

17 people died in a mass school shooting in Florida

On Feb. 14, 2018, 17 students and faculty were fatally shot in Parkland, Florida, by a 19-year-old former student. The student’s behavior prior to the event indicated that he had been planning the event. Seventeen families lost children, friends, and more that day. Although 17 is a lot, it’s not as many as Las Vegas, Sandy Hook, Virginia Tech, or the nightclub shooting in Orlando, Florida. The Parkland incident ranks No. 9 of the top 10 deadliest shootings in modern U.S. history — eight other events had higher numbers.

Next: The number of casualties in the past 50 years is heartbreaking.

Since 1966, more than a thousand people have been killed in mass shootings across the country

It seems like each year we hear about multiple tragedies occurring at schools, airports, office buildings, or other public places. Often, headlines read “5 people killed” or “4 killed, 1 injured” — something along those lines. However, those numbers add up. Since 1966, 1,077 people have been killed in mass shootings in the U.S., according to The Washington Post. Those people came from many different races, backgrounds, and religions, but all fell victim to gun violence.

Next: There have been too many mass shootings.

… And there have been 150 mass shootings

Mourners are asking for change and action. | Mark Wilson/Getty Images

Those 1,077 people fell victim in one of 150 mass shootings since 1966. According to The Washington Post, in the 50 years prior to 1966, there were only 25 recorded mass shootings. Somehow, that number multiplied six times in the 50 years after. Many of the deadliest shootings, such as those previously discussed, occurred in the 2000s. Shootings at schools were few and far between before the Columbine shooting of 1999. Since then, however, it seems like they’ve become more and more common.

Next: The U.S. gun violence rate is far higher than this country.

In 2012, the number of gun homicides per capita was 30 times that of the United Kingdom 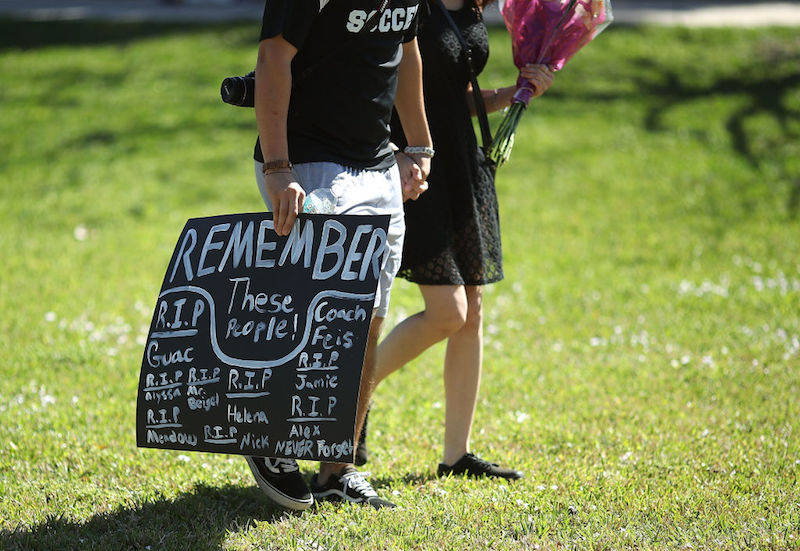 Sadly, there is too much gun violence in the U.S. — especially when compared to other countries. When it comes to gun homicides per capita, the U.S. lands at 2.9 per 100,000 people. The U.K. is nearly 30 times less than that, at just 0.1 per 100,000 people. Those pushing gun control laws have often brought out these statistics in Congress, specifically after the Sandy Hook event. However, it’s often to no avail.

Next: The U.S. takes the top spot for gun violence among these countries.

More people are killed with guns in the U.S. than in Canada, Australia, or the U.K.

The U.S. sees a much higher rate of gun violence. | Win McNamee/Getty Images

The percentage of murders in the U.S. that involved guns is staggeringly higher than in other developed countries. In the U.S., 60% of murders were committed using a firearm in 2012 (the most recent year for statistics). According to the BBC, it was about half of that in Canada at just 31%. Australia saw just 18.2% of murders by firearm, and the U.K. was a small 10%.

Next: Gun violence occurs far more often than this.

The U.S. invests a lot of money into fighting terrorism. And though fighting terrorism is extremely important and should be one of the government’s priorities, there are many more firearm deaths in the country than deaths by terrorism. The average yearly number of gun deaths between 2001 and 2011 was about 11,100 people, according to the U.S. Department of Justice and the Council on Foreign Affairs. The average yearly terrorist deaths, when excluding Sept. 11, was 31 per year. (With Sept. 11 included, the figure jumped to 517 per year — still far lower than 11,100.)